For 2016 international merchandise trade statistics point out China has net imported roughly 1,300 tonnes of gold, down 17 % from 2015. The importance of measuring gold imports into the Chinese domestic gold market – which are prohibited from being exported – is to come to the best understanding on the division of above ground reserves in and outside the Chinese domestic market.

Kindly be advised to have read my posts the Mechanics Of The Chinese Domestic Gold Market. If segments in this post are unclear please click the links provided.

The last bits of data are coming in from the countries that export gold to China, with which we can compute the total the Chinese have imported in 2016. There are four main gold exporters to China, which are Hong Kong, Switzerland, the UK and Australia (it’s not publicly disclosed how much South Africa exports directly to China ). Let’s start discussing the largest gold exporter to China.

Since 2011 when the gold price slowly started to decline and China embarked importing gold at large, Hong Kong has been the main conduit to the mainland. According to data by the Hong Kong Census And Statistics Department (HKCSD) the special administrative region net exported 771 tonnes of gold to China in 2016, ranking first once again. Net exports were down 10 % compared to 2015. 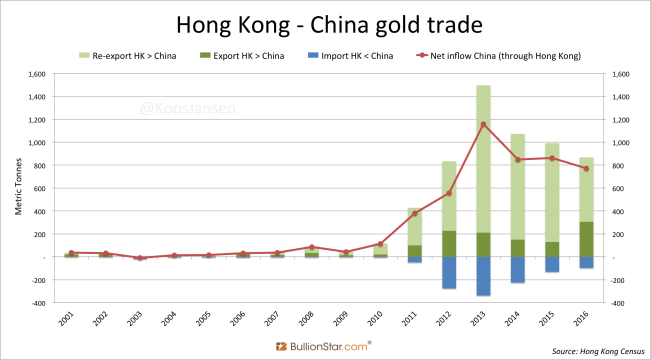 As I mentioned in November 2016 there were rumors that part of the bullion exports from Hong Kong to China were fake – over-invoiced to move capital out of the mainland – which overstated the flow of gold into China. Let’s investigate if the data by the HKCSD can substantiate this rumor. The net amount of bullion going from Hong Kong to China is the residual of exports (materials lastly fabricated in Hong Kong) plus re-exports (materials not altered in any way, shape or form but merely re-distributed by Hong Kong) minus imports (materials imported into Hong Kong from China through processing trade). If one is to engage in over-invoicing exports from Hong Kong are more suitable than re-exports, because the origin of exports are harder to track. For re-exports the origin of the material must be recognized by the HKCSD, which makes any illegal scheme more difficult to conceal. Notable is that from February through August 2016 there was an increase of gold exports relative to re-exports from Hong Kong to China (see dark green bars in the chart above). Usually the shipments from Hong Kong to China are re-exports, so the increase in exports was remarkable. But the HKCSD data is no hard evidence any transfers were overstated.

In another example: if we look at the composition of Hong Kong’s export and re-export to the UK in 2016, we can see something similar, the majority were exports. 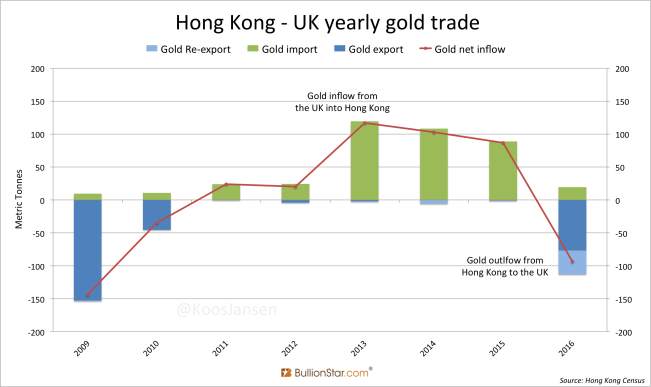 I doubt Hong Kong’s flow of gold to the UK has been overstated; UK residents have no motive to surreptitiously move capital abroad. And if the data on Hong Kong’s shipments to the UK are accurate, why can’t the data on Hong Kong’s shipments to China be accurate? Thereby, the Chinese customs department is not retarded. I’m quite sure the Chinese customs department is aware of over-invoicing schemes and as a consequence it can strictly monitor cross-border gold flows. My conclusion is that net shipments from Hong Kong to China in 2016 have likely been close to 771 tonnes. If I do ever find hard evidence it was less I will report accordingly.

Most likely Hong Kong’s position as the largest gold exporter to China will slowly fade in the coming years, as the State Council is stimulating gold freight to go directly to Chinese cities (hoping the Shanghai International Gold Exchange will eventually overtake Hong Kong’s role as the primary gold hub in the region). Consequently, gold exports to China are increasingly bypassing Hong Kong. 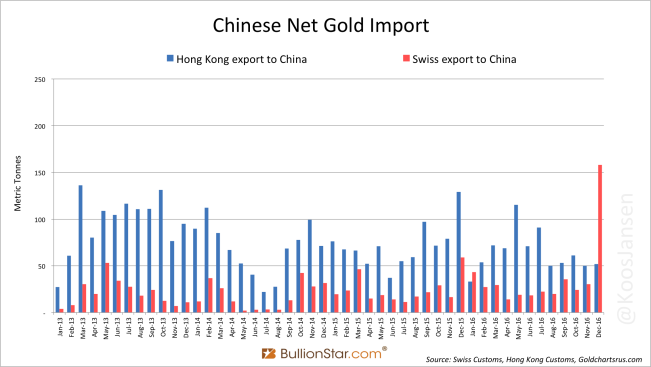 It will take more time before Hong Kong’s role as supplier to China is fully over though. In the past years a significant part of gold exports to China has been used to quench Chinese jewelry demand. The core of the Chinese jewelry manufacturing industry is located in Shenzhen, which is right across the border from Hong Kong. But as far as I know there aren’t many flights going directly from Switzerland, Australia or the UK to Shenzhen yet. Hong Kong on the other is well connected; so in the near future Hong Kong’s airport is more convenient to supply gold from abroad to Chinese jewelry manufacturers. 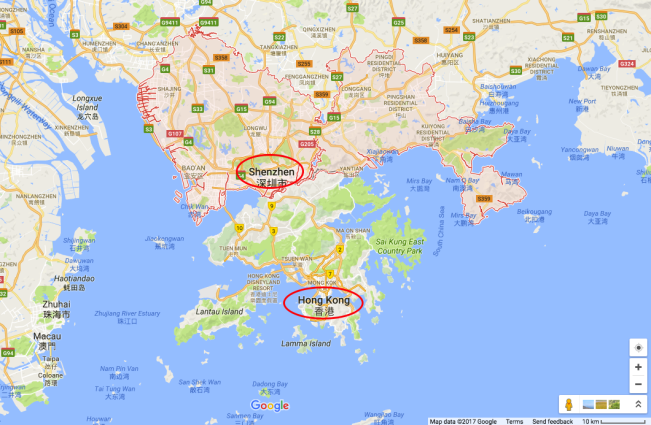 Direct gold shipments from the UK to China have been tepid in 2016. Only 15 tonnes have been net exported to the mainland over this time horizon. Noteworthy though, in December 2016 the UK exported 172 tonnes to Switzerland, which in turn moved 158 tonnes to China – as I mentioned in the previous chapter. So although the UK didn’t directly export metal to China in December, it sure was the main supplier. 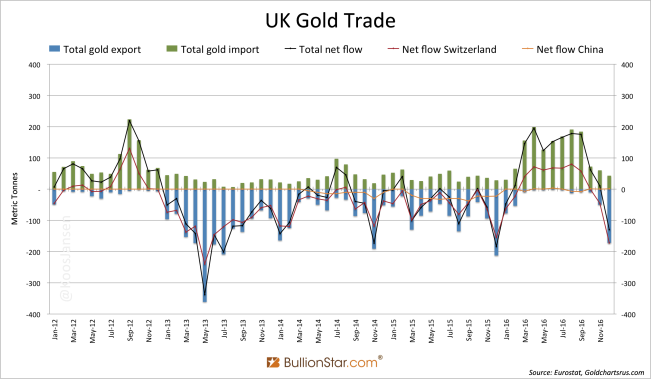 Not all data from the Australian Bureau of Statistics (ABS) has been released for 2016, but from what we have Australia seems to have exported less to China than in 2015. From January through September direct shipments amalgamated to 53 tonnes, while Australia directly net exported 78 tonnes to China over the same months in 2015. (ABS has notified me they changed the way how they disclose gold export data, but they failed to clarify the details. Until I get more information I will stick to my own formula to compute Australia’s direct export to China, which was confirmed to be accurate by ABS early 2016.)

It can be Australia’s direct exports where strong in last three months of 2016 as the price of gold went down over this period and the Chinese increase gold purchases on a declining gold price.

According to the data at my disposal there have been practically zero tonnes of gold imported from China by other nations across the globe than the ones discussed above. Signalling there is very little gold being exported from the Shanghai International Gold Exchange (SGEI) located in the Shanghai Free Trade Zone. Possibly foreign central banks buy gold on the SGEI and ship it home as monetary gold which doesn’t show up in any customs reports. However, in the history of the SGE/SGEI a mere 3 tonnes has been traded in 12.5 Kg bars, all the rest was in smaller bars, mainly 1 Kg. And I assume central banks would prefer large bars. All in all I think that up till now the SGEI has mainly been used by Chinese banks to import gold from the Shanghai Free Trade Zone into the domestic market. 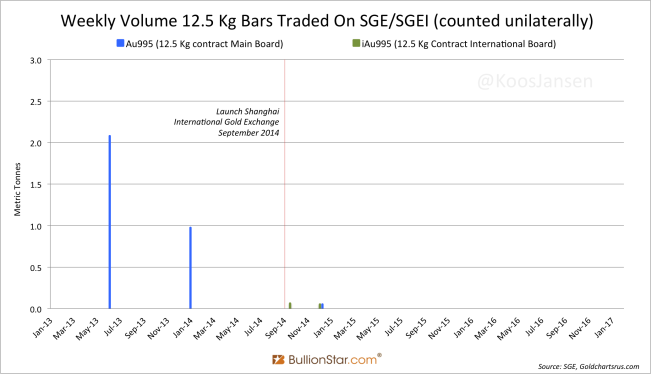 Total gold supply in China in 2016 was at least 1,753 tonnes (domestic mine output was 453 tonnes plus 1,300 tonnes import) while the China Gold Association discloses consumer demand at 975 tonnes. Meaning, Chinese institutional demand was at least 778 tonnes ( 1,753 minus 975), depending on the amount of scrap supply and disinvestment.

A few weeks ago I estimated Chinese gold import 2016 would aggregate to 1,300 tonnes, to which I calculated 5,000 tonnes of gold have been moved into the Chinese domestic market from 2007 through 2016 on top op the imports to satisfy Chinese consumer demand. In my post The West Has Been Selling Gold Into A Black Hole I explain how I think this will strengthen a forthcoming gold bull market. 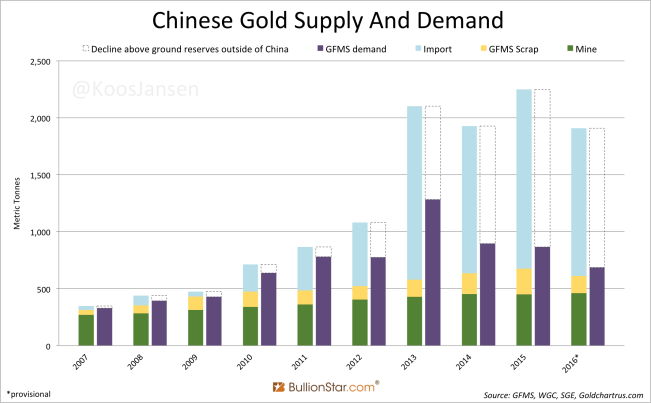 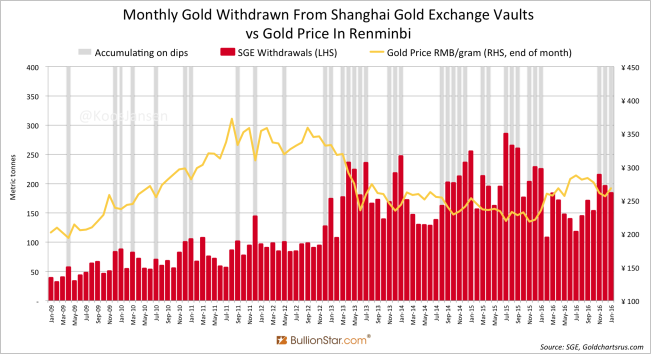