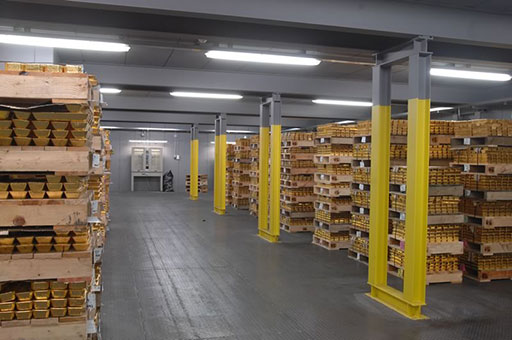 HSBC is an international banking group and one of the largest banks in the world. Its activities span commercial banking, investment banking and trading and wealth management. HSBC has operated its global headquarters from London, England since 1993. Prior to that date, the Bank’s headquarters was Hong Kong. HSBC has a substantial presence in the global precious metals markets, and is active in trading all four precious metals, namely, gold, silver, platinum and palladium. The initials HSBC are derived from the name “Hong Kong and Shanghai Banking” Corporation.

History of HSBC in the London Gold Market

In 1992, HSBC Holdings Plc acquired one of Britain’s largest high street banks, Midland Bank. The following year, HSBC moved its global headquarters to London. Midland had been involved in the London Gold Market since the late 1960s  via a partial ownership of Samuel Montagu. Samuel Montagu & Co was a City of London bullion broker, and one of the 5 original gold fixing members of the London Gold Fixing. In 1974, Midland fully acquired Montagu to form Midland Montagu. This positioned Midland Montagu with one of the 5 ‘Gold Fixing’ seats. In 1999, the HSBC group began using the name ‘HSBC’ for the Gold Fixing seat of Midland Montagu.

HSBC has never revealed the exact location of its London gold vault. Notwithstanding this peculiar stance from HSBC, its possible that its vault is located in the City of London under Queen Street Place at the entrance to South Bridge approach road. See BullionStar blog “HSBC’s London Gold Vault: Is this Gold’s Secret Hiding Place?” for further details, which makes a strong case for this theory[1].

In late 2007, STREETTracks released 4 photos of a ‘new’ looking ‘open-plan’ London vault. These photos can be viewed here[3].

In mid-2011, US financial news channel CNBC filmed a documentary report from inside the HSBC London vault. This report was presented by CNBC’s Bob Pisani. The CNBC footage is available to view via a number of differnet but similar segments that are available online[4][5][6].

Based on the STREETTracks photos of the ‘old’ HSBC London vault, the vault looked to be a rather rundown and well-used underground space where the gold was stored in narrow walled areas that were interspersed with support pillars. The gold bars stored in the vault were organised on wooden pallets, with each pallet holding 1 tonne of gold, and pallets stacked up to 6 high, and then organised into rows. The height of the vault looks to be approximately 4 metres.

The ‘new’ HSBC London vault, as seen in the STREETTracks photos from 2007 and in the 2011 CNBC videos, shows a large rectangular looking open-plan space, where rows of yellow-painted steel support columns hold up horizontally running steel beams.  The gold bars stored in the vault are still stored on wooden pallets (with each pallet holding 1 tonne of gold), and the pallets are stacked up to 6 high, and then arranged into rows. The height of the vault still looks to be approximately 4 metres. The size of the ‘new’ vault was described by a World Gold Council executive as sizable but “not quite as big as a cricket pitch”[7], and also described as “about the size of a football field“.

The largest gold storage client at HSBC’s London vault is the SPDR Gold Trust (GLD). At its peak in December 2012, GLD held 1353 tonnes of gold. This would have been the equivalent of 1353 pallets of gold, and if pallets were stacked 6 high, this would be 225 towers of pallets. Another substantial gold storage client of HSBC’s London vault is ETF Securities, whose physically-backed gold ETFs have at times stored up to appoximately 200 tonnes in the vault. HSBC also holds gold for other clients at its London vaults.

Its unclear what the maximum capacity of HSBC’s London vault is, but it is probably less than 1500 tonnes. As one of the clearing members of the London Gold Market, HSBC has a gold account at the Bank of England, and its realistic to assume that if HSBC’s own London vault was full or nearly full, then it could use gold storage facilities at the Bank of England or else at one of the other gold vaults that make up the LBMA gold vaulting system.

Type of gold held at the HSBC London vaults

All of the gold held by the SPDR Gold Trust and ETFS gold ETFs is in the form of London Good Delivery bars ranging in purity from 99.5% to 99.99%. These are the large variable weight bars that are commonly 400 ozs or 12.5 kgs in weight. For example, as of 30 September 2015, the SPDR Gold Trust held 54,807 London Good Delivery gold bars at the HSBC London vaults. Therefore, the vast majority of gold held with HSBC in London is in the form of large Good Delivery bars. This is borne out by the visual evidence from the STREETTracks website and the CNBC video documentary.

ETF Securities operates a UK-listed ETFS Physical Platinum Trust (PHPT)[9] which at the end of 2015 held 305,700 ozs in the form of 1,981 Good Delivery bars at the HSBC vault in London.