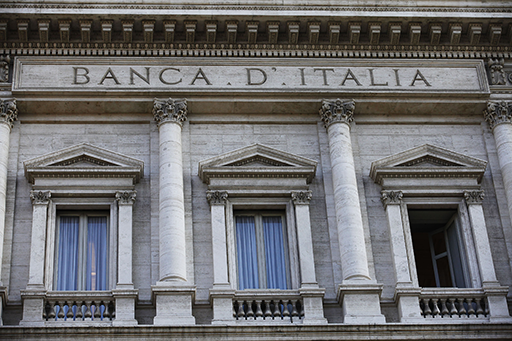 In April 2014, the Banca d’Italia published a 3 page report on the storage locations of Italy’s gold reserves[1]. The document highlights that the Italian gold is held across four locations, one of which is the Banca d’Italia’s headquarters building in Rome, Italy.

In its detailed report focusing on the gold reserves, the Banca d’Italia reveals that 1,199.4 tonnes, or nearly half the total, is held in the Bank’s own vaults under its Palazzo Koch headquarters on Via Nazionale in Rome, while the majority of the other half is stored in the Federal Reserve Bank’s gold vault in New York. The Bank’s report also states that smaller amounts of its gold are stored at the Bank of England in London, and at the vaults of the Swiss National Bank in Berne, Switzerland.

Profile of the Banca d’Italia

Banca d’Italia[2] is the central bank of the Republic of Italy. It is a member of the Eurosystem, and a shareholder in the European Central Bank. Banca d’Italia was founded in 1893 via the merger of Banca Nazionale and two Tuscan banks.

Palazzo Koch is a palace that was built specifically as the head office of the Banca Nazionale between 1888 and 1893. Banca Nazionale was subsequently renamed Banca d’Italia in 1893. Palazzo Koch is named after its architect, Gaetano Koch. The building is located at 91 Via Nazionale, in central Rome, and occupies an entire block, borded by Via Nazionale, Via Mazzarino, Via dei Serpenti, and Via Panisperna. The main arched security entrance is at 55 Via dei Serpenti.

In 2010, Italian TV station RAI filmed a report inside the Bank’s gold vaults in the basements of Palazzo Koch. The RAI broadcast was for an episode of ‘Passaggio a Nord Ovest’, and was presented by Alberto Angela. Angela’s report can be viewed here[3].

An English translation of the relevant sections of the RAI broadcast is as follows:

We’ve had a special permission to visit this place, called “the sacristy of gold.” Here there’s a big protected door, and three high personnel from Banca d’Italia who are opening the door for me. Three keys are needed to open the door of the vault, one after the other and operated by three different people. Obviously we can’t show the security systems nor the faces of these men, but the door is huge, at least half a metre, and leads to another gate where again three keys must be used. Past this, that’s where our country’s gold is kept.

Here we are. It’s exciting to get in here, the environment is simple, sober. [general commentary, then camera shows a large amount of gold]

This is not all the gold we own, as part of it is also stored in The Federal Reserve in the US, in the Bank of England in the UK and in Banca dei Regolamenti Nazionali in Switzerland (Bank for International Settlements). I’m speechless when exploring the sacristy, … you don’t see this every day.

The value of all this gold is established by the European  Central Bank, that also establishes its price. The overall value appears in the end-of-year balance. In 2005, the gold was valued at 20 miliardi of Euros (billions).

There are three types of lingotti (square-shaped gold). {the reporter says how much they weigh}.

They feature some signs on them, to say that they have been checked. Some are almost 100% gold, pure gold. There’s also a serial number on the gold, and a swastika on some of them as the Nazi took away all our gold, transferring it first to the north of Italy and then to Germany and Switzerland. At the end of the war, part of it came back featuring the Nazi sign.

This gold represents the symbol of our wealth, without this we wouldn’t be able to deal with the rest of the world, it’s a symbol for Italy, a guarantee, like a family’s jewellery. The gold can be used to get loans as happened when Italy asked a loan to Germany [in 1974] and Germany demanded, as a guarantee, the value in gold. So the name Germany was put on this gold at the time.”

Three Italian senators of the political party Movimento Cinque Stelle visited the Banca d’Italia gold vaults in Rome on 31 March 2014 and called for the ownership of the gold to be transferred from the Banca d’Italia to the Italian public so that its control cannot be compromised. A video featuring the 3 senators outside the Palazzo Koch before and after the vault visit was also made at that time[4]

These 3 senators featured in the video are Senator Giuseppe Vacciano, Senator Andrea Cioffi and Senator Francesco Molinari. A summary of thier visit is also provided (in Italian) on their website[5]. In his report, Vacciano confirm some interesting facts, such as that the Italian gold belongs to the Banca d’Italia and not the Italian State, and that in the vault they saw some South African gold bars, many American gold bars, and “several bearing the Nazi eagle”.  And in a similar way to the RAI reporter Alberto Angela, who said in 2010 that he was speechless when viewing the gold in the sacristy, Vacciano says

“from a purely human perspective, we could see with our own eyes a quantity of precious metal that goes beyond an ordinary perception … I must say that arouses feelings that are difficult to explain”.

The gold vaults in Palazzo Koch comprise a number of arched open plan chambers lined with adjacent rows of metal cabinets with metal grille doors. Each cabinet contains five shelves, and gold bars are stacked 1 deep, 10 across and 6 high in each shelf, meaning that there are 300 bars in each cabinet (3.75 tonnes). Each aisle hosts about 40 cabinets, 20 each side of the aisle. There are also cabinets positioned at the end of the aisles around the walls. Some gold bars are also stacked in low piles within the aisles and in the surrounding floor space, i.e. outside the metal cabinets. Most of the bars are numbered with small stickers.

In a similar way to other major European central banks, the Banca d’Italia’s gold reserves were mainly accumulated during the late 1950s and early 1960s. Like other central banks, the Banca d’Italia states that it uses 4 storage locations partly due to historical reasons and partly because of its deliberate strategy gold storage diversification strategy. Although Banca d’Italia was a relatively important official gold holder during the first half of the 20th century, it still only held 402 tonnes of gold as of 1957. However, from 1958 until the late 1960s, the country’s gold reserves increased nearly 600% and exceeded 2,560 tonnes by 1970[6].

The Gold stored in Rome

Of the 1199.4 tonnes of Italian gold held in Rome, 1195.3 tonnes is in the form of gold bars, with 4.1 tonnes held as gold coins (871,713 coins). There are 95,493 bars in the Rome vaults. Most of these bars are the standard trapezoidal or prism shaped bars, however the holdings also include brick shaped US Assay Office bars with rounded corners, which were produced by the New York Assay Office, and another bar type which the Bank d’Italia refers to as ‘panetto’ (or loaf) shaped ‘English’ bars. The average fineness or gold quality of the bars stored in Rome is 996.2 fine, however the holdings also include some 999.99 fine bars. The average weight of a bar stored in Rome is 12.5kg (or 400 oz), but the bar weights range from 4.2kgs up to some very large 19.7kgs bars.

The RAI television broadcast from 2010 was also notable in that it revealed that the Banca d’Italia holds bars of varied origins in its Rome vaults, including bars stamped with the official Bank of England stamp, and bars from the US Assay Office in New York including a featured bar from 1947. There are also Russian bars shown in the RAI video, one of which is shown in the video with the CCCP lettering, the hammer and sickle stamp, and the letters HKUM.

More surprisingly perhaps, is the fact that the Banca d’Italia also holds Nazi gold bars from the Prussian Mint in Berlin. The RAI broadcast video shows a 1940 Nazi bar from Berlin, stamped with the eagle and swastika insignia and with Prussian mint markings. The Nazi bar holdings can be explained by the fact that the Italian gold was confiscated by the Nazis during WWII and ended up being moved out of Rome up to the north of Italy and then most of it was transported onwards to Berlin or else to Switzerland. Following the war, some of the gold given back to the Italians as part of the Tripartite Commission payouts happened to be Prussian Mint bars stamped with the Nazi symbol.

The Banca d’Italia states in its 3 page gold document that external auditors verify the gold held in Rome each year in conjunction with the Bank’s own internal auditors.