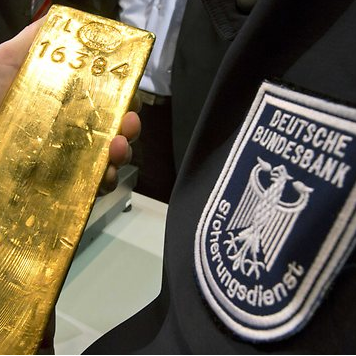 Germany’s central bank, the Deutsche Bundesbank (German Federal Bank), holds the world’s second largest official gold reserves, with claimed holdings of 3381 tonnes, stored over four locations. Of all central bank gold holders, the Bundesbank has probably generated the most interest and attention over the past few years due to its substantial and long drawn out repatriation of a large amount of its gold from storage sites in New York and Paris to storage at its own headquarters in Frankfurt, Germany.

“The Bundesbank holds and manages Germany’s gold, which it keeps in storage with four custodians worldwide, as part of these reserve assets.”[2]

In 2012, it became public knowledge that the German Federal Court of Auditors, the Bundesrechnungshof, was critical of the Bundesbank’s oversight of storage arrangements for that portion of German gold reserves which were stored abroad at the vaults of the Federal Reserve Bank of New York, the Bank of England and the Banque de France. The German Federal Court of Auditors (FCA) is an independent judicial institution whose powers derive from the German Constitution, and which is responsible for financial management of the German State. In its 2011 confidential audit of the Bundesbank, the Bundesrechnungshof specifically took exception to the lax way in which the Bundesbank merely relied on annual written statements from its foreign gold custodians about Germany’s gold holdings. The Bundesrechnungshof was also critical that the Bundesbank did not conduct any physical audits of its gold stored abroad[3].This confidential audit report was first passed to the finance committee of Germany’s parliament, the Bundesstag, and following this, a redacted version of the report became public in October 2012[4][5].

Due to the Court of Auditors’ critical report, the Bundesbank was forced to issue a statement[6] in October 2012 in which it attempted to defend the lax procedures that it employed in auditing its foreign held gold, and in which it stated such platitudes as:

“The integrity, reputation and security of these foreign depositories are beyond reproach.”

“There is no possibility of confusion or commingling with the holdings of other parties.”

“There is no doubt whatsoever that the institutions acting as the Bundesbank’s depositories have the very highest of reputation and credit rating.”

However, the same Bundesbank statement also promised that:

“the Bundesbank will take up suggestions by the FCA wherever possible”

“the Bundesbank will have part of its gold reserves reviewed and verified in future, too. This could also involve relocating part of the holdings.“

In a report, dated 22 October 2012, the same date on which the Bundesbank released the above statement, German newspaper Der Spiegel reported that the Bundesbank had agreed to transport 50 tonnes of gold from the Federal Reserve Bank New York each year for 3 years, in order for this gold to “undergo a detailed examination” [7].

The Federal Court of Auditors report therefore appears to have been the triggering event for the initial (and subsequently altered) gold repatriation program that was first promised by the Bundesbank in October 2012 (Plan A).

Arguably, the gold repatriation program was put in place in reaction to the criticism from the Court of Auditors purely so as to appease a number of parties including the Court of Auditors and German lawmakers, the German public, the German financial media and a number of German citizen groups that had already at that time been lobbying for repatriation of Germany’s gold reserves.

As of the end of 2012, the Bundesbank claims to have held 3391 tonnes of gold[9], stored in the same 4 locations and in the same percentage distribution as in 2011. The reduction of 5 tonnes in Bundesbank gold holdings between 2011 and 2012 was due to the Bundesbank supplying gold for use in the German Ministry of Finance’s gold coin program (see below).

In January 2015, the Bundesbank reported that it had managed to transfer 85 tonnes of gold from New York and 35 tonnes of gold from Paris, i.e. 120 tonnes overall[13][14]. Notably, of the 85 tonnes transferred from New York, the Bundesbank had to melt down and recast 50 tonnes of this gold, again suggesting that whatever gold the New York Fed had given the Bundesbank was not Good Delivery gold but merely low-grade coin bars or similar, or perhaps that the two central banks wanted to obscure the provenance of the metal.

In January 2016, the Bundesbank announced a progress update of its gold repatriation program during 2015. During calendar 2015, approximately 100 tonnes were repatriated from New York and 110 tonnes from Paris[15].

Inability of the Bundesbank to produce a Gold Bar List

In all of its annual updates about its gold repatriation program, not once did the Bundesbank ever publish any details of the gold bars that it transferred nor anything resembling a gold bar weight list. In October 2015, the Bundesbank did publish a very incomplete list of its gold bar holdings, however this list omitted crucial industry standard details of the bar holdings, specifically the list omitted refiner brand, bar serial number, and year of manufacture of each bar. For London Good Delivery (LGD) gold bars, which the Bundesbank claims to hold, these attributes of refiner brand, serial number and year of manufacture are normal variables in industry standard gold bar weight lists[17]. Any attempts to enquire about these incomplete weight lists are met with deflection by the Bundesbank [18].

The Federal Court of Auditors’ confidential report on the Bundesbank’s gold which became public in October 2012 contained one previously strange and unknown claim, which was that between the years 2000 and 2001 the Bundesbank had completed the secret transportation by air of 940 tonnes of its gold from the Bank of England vaults in London to the Bundesbank headquarters in Frankfurt. Prior to this secret repatriation, the Bundesbank claimed to hold 1,440 tonnes of gold in London, therefore following the transfer, the German holdings at the Bank of England only totalled 500 tonnes[19]. As to why this secret repatriation of 940 tonnes of gold was undertaken and why the details had never been made public prior previously is unclear.

The Bundesbank regularly sells small quantities of gold (amounting to a few tonnes) to the German Federal Ministry of Finance to supply gold for the finance ministry’s gold coin minting programme. Apart from these transactions, the Bundesbank stats that it doesn’t buy or sell any gold. Therefore, in its annual report, it is quite common to see the Bundesbank’s gold holdings drop my small amounts from year to year. For example, between December 2014 and December 2015, the Bundesbank’s gold holdings dropped by 3219 kilos, which was explained as “the sale of gold to the Federal Government at market prices for the purpose of minting gold coins”.

Audits of the German Gold

Recently, the Bundesbank has claimed that its gold reserves have been audited[21]:

“The gold reserves have been subject to several audits by Deutsche Bundesbank with fully satisfactory results. However, we cannot provide any details, since Deutsche Bundesbank and its partner central banks have agreed to maintain confidentiality with regard to the audits.”

Again, the disdain with which the Bundesbank treats enquires about its gold policies and activities highlights its total non-accountability to the public and its lack of transparency.

In October 2012, prior to the beginning of its gold repatriation program, the Bundesbank revealed that the gold that it already held in Frankfurt was stored as follows: 6,000 bars (75 tonnes) stored on industrial strength shelves, and a further 76,000 bars (945 tonnes) stored in sealed metal containers which are housed within 4 “safe boxes” (strong rooms)[22].

The metal containers and the rooms in which the containers are stored can be seen in 2 videos which are accessible on the Bundesbank website[23][24].

6.^ “Statement by the Deutsche Bundesbank on the accounting treatment of the gold reserves” Bundesbank website, 22 October 2012 https://www.bundesbank.de/Redaktion/EN/Pressemitteilungen/BBK/2012/2012_10_22_gold.html

22.^ “Why Germany Wants to See its US Gold”, Spiegel Online, 22 October, 2012 http://www.spiegel.de/international/germany/german-politicians-demand-to-see-gold-in-us-federal-reserve-a-864068.html

23.^ “Gold in the vault”: Video showing gold bars in a vault at Bundesbank in Frankfurt. Bundesbank website https://www.bundesbank.de/Redaktion/EN/Video/Footage/gold_im_tresor_en.html