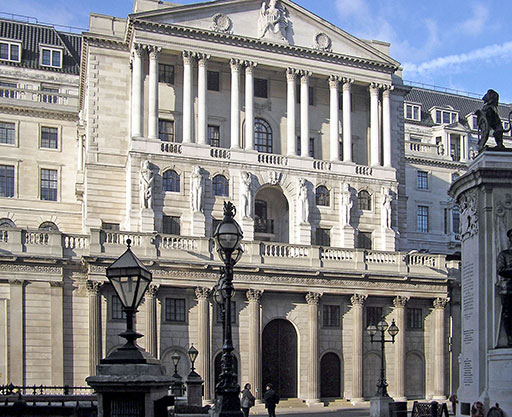 The Bank of England is one of the 2 largest gold custodians in the world, the second custodian being the Federal Reserve Bank of New York (FRBNY). From at least as far back as the early 20th century, the Bank of England has offered gold custody services to its foreign central bank and government customers, enabling them to purchase gold on the London Market and store it in the Bank’s vaults. This central bank gold is referred to as ‘earmarked gold’, and is said to be stored on a ‘set-aside basis’ since individual identifiable gold bars are owned by specific customers. In other words, the gold is allocated. All gold stored in the Bank of England vaults is in the form of Good Delivery gold bars or similar, each weighting about 400 troy ounces. There is probably a small amount of historic gold coinage also stored on behalf of some customers although the Bank does not highlight this. The Bank of England is only a custodian for gold and not for other precious metals.

The Bank of England’s gold vaults are located within the basement levels of its headquarters building, located in the City of London on a site bordered by Threadneedle Street, Princes Street, Lothbury and Bartholomew Lane. The service entrance to the Bank, and the internal yards, is via a secure arched gate on Lothbury, which is at the back of the building on the opposite side to the pedestrian entrance on Threadneedle Street.

The current Bank of England building on Threadneedle Street was built between 1924 and 1933 during which time the previous Bank of England building on the site was totally rebuilt. The 1920s/1930s rebuild involved excavating down 15.2 metres to create 3 basement levels to accommodate the vaults and foundations, and adding a 2.44 metre thick reinforced concrete wall around the site below the existing perimeter wall[1].

Bank of England Archives confirm that in the 1970s there were 6 ‘Triple Control’ gold vaults with a desirable storage capacity of 391,000 gold bars (4,860 tonnes), and a theoretical permissible storage capacity of 465,000 bars (5,780 tonnes)[2]. Triple control means that access to the vaults is under the control of three separate parts of the Bank, for example, a bullion operations team, an audit team, and a business unit team such as the Bank’s customer banking unit.

While the Bank of England does not provide comprehensive details of the layout, structure, or contents of its gold vaults, nor how much gold is stored and on behalf of which customers, it is still possible to draw together some of the vault details.

“At our premises at Threadneedle Street, London, we have approximately £200 billion worth of gold stored over 10 vaults“[4]

There are also cash vaults in the basements. The gold vaults and cash vaults are interchangeable depending on space requirements, hence the number of vaults being used to store gold can and does seem to vary. In the vaults, gold bars are stacked on metal framed, wooden-based storage pallets which each hold 1 tonne of gold bars (80 bars) and can be stacked on top of each other. Some vaults store pallets that are stacked 4 high, while at least one vault stacks pallets 6 high. Pallets are moved and stacked within the vaults using powered stacker pedestrian units such as the BT Staxio[5].

One of the vaults is known within the Bank as the ‘display vault’ or ‘show vault’[6]. This is the same vault that often appears in Bank of England media photos (with old posters on the vault walls), and is also the vault that was filmed during the visit to the Bank in 2012 by Queen Elizabeth II [7]. A Bank of England virtual tour app, available to download from the Apple Store and Google Play, includes a 360 degree tour of the ‘show’ gold vault[8]. A study by Warren James, based on this virtual tour app, estimated that this ‘display vault’ held about 690 tonnes of gold, in 270 stacks[9].

Another of the Bank’s vaults was also featured in a documentary video in December 2012 which shows a space in which the pallets are stored 6 high[10]. The same study by Warren James estimated that this vault (with 6 high pallets) was storing circa 410 tonnes of gold. At the London Bullion Market Association annual conference in Rome in September 2013, the Bank of England reported in a presentation that its gold vault storage arrangements took up 3,000 square metres. This presentation included numerous detailed photos of a 6 high pallet vault and can be seen here[11]. The same presentation includes photos of the entrance to this vault, which is named vault ‘SV7’.

How many Gold Customers?

A 2014 Bank of England publication stated that 72 central banks maintain gold accounts with the Bank[14]. A March 2011 LBMA presentation said that

“The Bank of England acts as gold custodian for about 100 customers, including central banks and international financial institutions, LBMA members and the UK government.”[15]

With 72 central bank customers this means that there may be up to 28 LBMA bullion bank members with gold accounts at the Bank. This is realistic given that most of the LBMA’s bullion bank members have been involved at various times in the London gold lending market, and a gold account at the Bank of England would be needed by a commercial bank in order for the commercial bank to take title to the borrowed gold while being the counter-party of the gold lender.

Who are the Gold Customers?

Some of the ‘large’ gold custody customers are as follows. Germany still holds 438 tonnes of gold at the Bank of England vaults, even after having repatriated over 900 tonnes back to Frankfurt from London in the early 2000s. Austria stores 208 tonnes of gold at the Bank in London, Switzerland stores 224 tonnes, and Belgium stores approximately 200 tonnes at the Bank. The UK’s 310 tonnes are also stored in the Bank’s vaults. The IMF does not report exact gold holdings at each of its depositories however there is probably still at least 600 tonnes of IMF gold in London, since, when the IMF last reported its London gold holdings in 1976, it has 900 tonnes stored in London.

How much gold is in the Bank of England vaults?

Since they are a working set of vaults, it will always be difficult to know how much gold is actually being held in the Bank of England vaults at any given time. However, the Bank does report overall figures once per year in its annual report. In its 2015 annual report, dated Saturday 28th February 2015, the Bank of England stated that it held £130 billion worth of gold in custody. At the previous day’s price of gold, this equates to 5,134 tonnes of gold, or approximately 411,000 Good Delivery bars[16]. Given that figure of 400,000 bars is used frequently by the Bank and the LBMA when discussing how much gold is stored in the Threadneedle Street vaults, this figure seems to be a favoured one in Bank and LBMA circles, but should be considered a very general ballpark. See BullionStar blog “How many Good Delivery gold bars are in all the London Vaults?….including the Bank of England vaults” for more details.

Data on official sector gold held at the Bank of England vaults, however, should come with a warning, which is that it is impossible to know how much of this vaulted gold is encumbered (on lease or with competing claims against it). This is because there is extremely limited information about central bank gold lending in the London Gold Market, and neither the Bank of England, LBMA bullion banks, or the central bank customers in question will engage in discussion about this very secretive part of the market.

14.^ “The Bank of england as a Bank”, Bank of England, Quarterly Bulletin, Q2, 2014 http://www.bankofengland.co.uk/publications/Documents/quarterlybulletin/2014/qb14q202.pdf