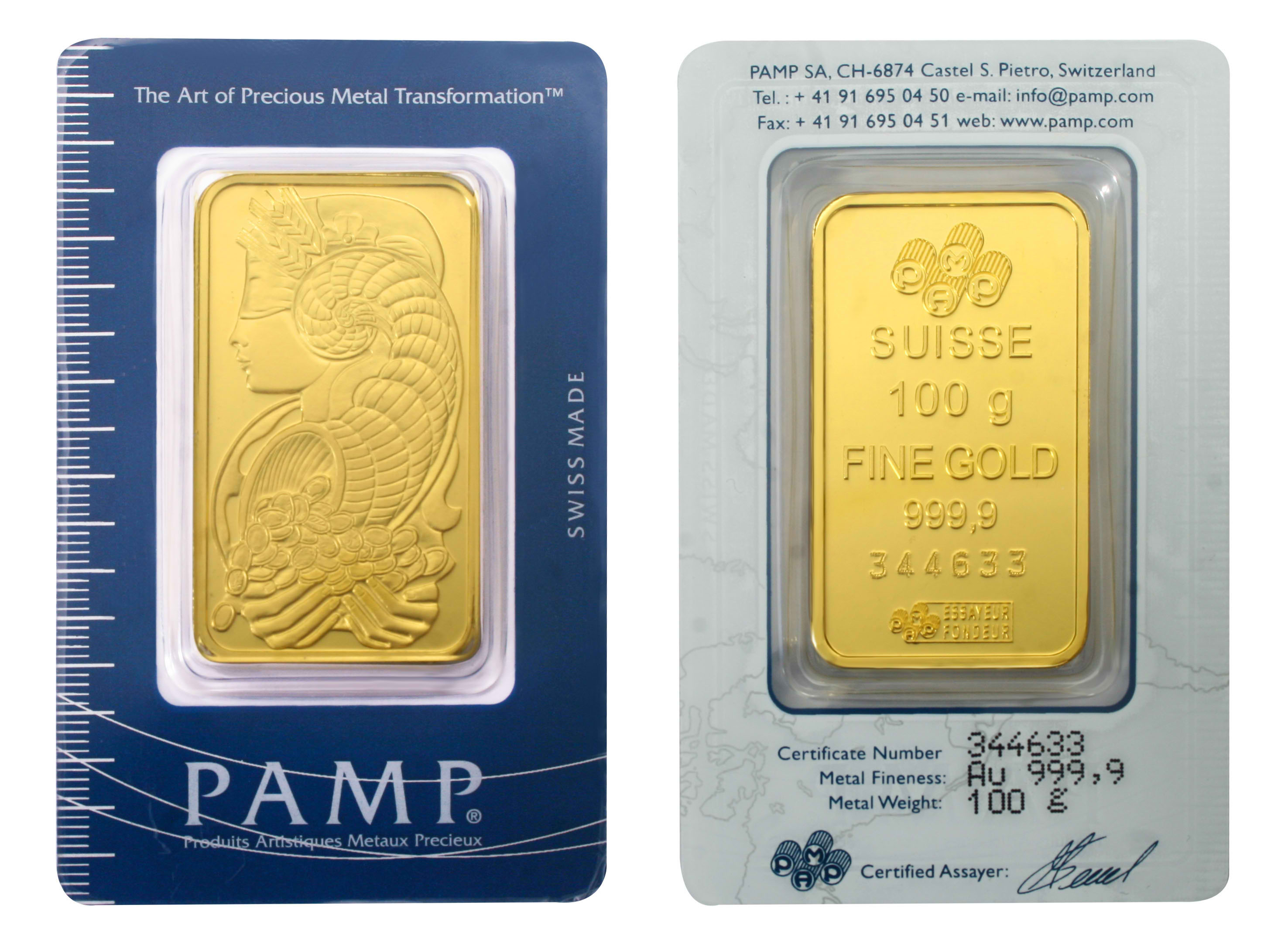 PAMP’s refinery is well-known for its high quality gold and silver bars and was the first bar producer to introduce artistic designs on to its minted bar range. PAMP bars are highly regarded around the world and are especially popular in Asia and the Middle East. Through MKS and MTB, the PAMP products use a very extensive worldwide distribution network.

Histories of PAMP and MKS

PAMP, which is an abbreviation for Produits Artistiques Métaux Précieux, was established as a registered company PAMP SA in the Swiss Canton of Ticino in 1977[4].

The refinery is located in Castel San Pietro, which is in the south of Ticino near the Italian border, and also very close to two of Switzerland’s other huge gold refineries, namely Valcambi and Argor-Heraeus. All three of these refineries set up their refining operations in the south of Ticino in order to supply the Italian gold jewellery market, which was at one time the largest gold jewellery market in the world. PAMP initially began as a manufacturer of small minted gold bars[5].

MKS was established in Geneva in 1979 as MKS (Switzerland) SA[6]. The founder of MKS was Mahmoud Kassem Shakarchi, hence the name MKS. Shakarchi had been a well-known gold trader in Beirut in the 1960s and early 1970s, and had moved to Switzerland in 1976. MKS began working with the PAMP refinery and started trading PAMP’s gold bars in the Middle East. In 1981, MKS purchased a controlling interest in the PAMP refinery. In 1998, MKS opened the first of its foreign offices in Sydney, Australia. Further MKS offices have been opened in such prominent gold markets as Istanbul, Dubai, Bangkok, Singapore, and Hong Kong. In 2001, MKS acquired Manfra, Tordella & Brookes (MTB) of New York.

In 2008, PAMP launched its joint venture refinery with MMTC in India. MMTC[7], or Metals and Minerals Trading Corporation of India, is India’s largest public sector enterprise, and is known as a Government of India Undertaking. MMTC is India’s largest commodity importer (excluding oil), largest importer of gold into India, and is a significant onward distributor of gold to bullion dealers, jewellers and gold exporters within India.

PAMP SA (the refinery in Ticino) is part of the MKS PAMP Group. MKS PAMP Group is the parent company of the organisation and is headquartered in Amsterdam, the Netherlands, as MKS PAMP Group BV. The Amsterdam office provides, strategic, finance and business development functions and is where the group’s CFO is located. The MKS PAMP portfolio of holdings consists of:

The refinery can extract precious metals from any metal bearing material such as mining doré or recycling scrap, and also refine and recast existing investment bars such as good delivery bars into smaller bars. PAMP also provides an assaying service to clients[11]. Products produced by the refinery range from investment cast and minted bars, bullion coins, coin blanks, and commemorative coins, alloys in forms such as rods and wire and for use in the jewellery industry, gold and silver grain, platinum and palladium sponge.

PAMP SA one of the 5 refiners worldwide that have been appointed as Good Delivery referees in the London Bullion Market Association’s good delivery referee panel. These referees maintain the LBMA’s Good Delivery System by assessing refining applicants, providing technical advice, and assaying metal samples from other refineries[12]. PAMP good delivery bars are accepted for settlement on the major gold futures and gold spot markets worldwide, such as TOCOM in Japan, COMEX in the US, the Dubai Multi Commodities Centre (DMCC), and the Shanghai Gold Exchange. In fact, MKS (Switzerland) is one of six reference price members of the recently launched Shanghai Gold Fix.

In its minted bar range, PAMP fabricates minted gold bars in 20 gram, 50 gram, 100 gram, 250 gram, 500 grams and 1kg weights, as well as smaller bars from 0.3 grams up to 10 grams. Bars in multiples and fractions of troy ounces are also produced in ¼ oz, 1/2 oz, 1 oz, 5 oz, 10 oz, and 20 oz sizes, as well as 1 – 5 Tola bars. Most of the gold minted bars are embossed with PAMP’s famous ‘Lady Fortuna’. There are also ranges of small gram and ounce type denominations in Rosa (Rose) and Liberty (Statue) designs. PAMP also makes a range of gold minted ‘Lunar’ bars which care decorated with animals of the Chinese zodiac. PAMP’s silver minted bar range comes in similar sizes and patterns as its gold minted bar range, and platinum and palladium bars are minted in 1 kg weights.

Overall, the extent of PAMP’s minted bar range is quite staggering, and the full range can be appreciated on the refinery’s website[15][16], and in a specialist gold bar listing such as Gold Bars Worldwide[17].

In 2008, PAMP established a joint venture with MMTC[18] in India to build and operate a gold and silver refinery. The joint venture company is called MMTC-PAMP India Pvt. Ltd. The MMTC-PAMP corporate office is located in New Delhi within the Qutab Institutional Area, however the actual refinery is located in the Mewat area of Haryana state, south of New Delhi. Due to PAMPs refining expertise, the refinery operates under the technical control and supervision of PAMP Switzerland and processes both gold and silver doré from imported mining sources and gold and silver jewellery scrap from domestic sources.

Gold bars produced by MMTC-PAMP include a variety of minted and cast bars up to 12.5kg (400oz) cast good delivery gold bars. Cast gold bars are produced in 100 gram, 1 kg, and 12.5 kgs weights, while cast silver bars are fabricated in 1 kg and 30 kgs sizes[21]. The refinery’s minted bars ar made in many denominations from 1 gram to 100 gram  in gold, mostly with a distinctive lotus bar design, while minted silver bars are produced in denominations from 5 grams to 1 kg[22]. Notably, MMTC-PAMP also produces a gold sovereign coin in India under licence from The Royal Mint. This Sovereign has an ‘I’ mintmark[23].

MMTC-PAMPs large gold and silver bars are accredited by the London Bullion Market Association (LBMA) for inclusion on the Good Delivery Lists for gold and silver. MMTC – PAMP is the only precious metals refinery in the Indian gold market to be included on this list. It’s also an accredited refiner of the Multi Commodity Exchange (MCX).

PAMP bullion products are available through a wide selection of distribution channels[24]. In the wholesale market, PAMP itself is a wholesaler of its bullion range as is MKS (Switzerland) and the other MKS offices around the world such as Singapore, Istanbul, Sydney[25], Malaysia[26], . For the US market, PAMP subsidiary Manfra, Tordella & Brookes (MTB) acts as a major US wholesaler[27]. A range of retailers also officially distributes PAMP bars but they are just a small selection of the full retail market, many of which purchase directly from PAMP, MKS, or from MTB. For example, BullionStar has relationships with MKS, PAMP and MTB.

PAMP, MKS and MTB also act as official distributors for the bullion coins produced by the world’s major mints[28].