The Mechanics Of The Chinese Domestic Gold Market 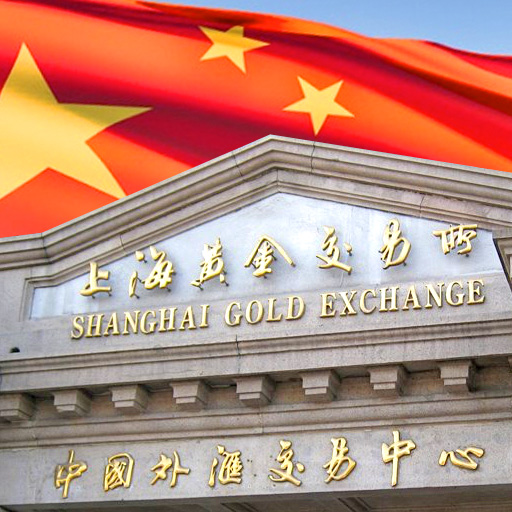 At the heart of the Chinese domestic gold market lies the Shanghai Gold Exchange (SGE). Due to the depth of SGE liquidity and the centrally imposed rules of the Chinese gold market such as cross-border trade rules and VAT rules, nearly all gold flows in China are required to and/or are incentivized to pass through the SGE trading and vaulting system. This includes nearly all gold imported into China and nearly all gold mined within China. The SGE vaulting system consists of 61 vaults across 35 Chinese cities.

Some high-profile precious metals consultancies such as Thomson Reuters GFMS and the World Gold Council still publish annual Chinese gold demand figures that are far lower (for example 900 tonnes per annum) than the annual SGE gold withdrawal figures. These discrepancies are so large that they call for rigorous analysis and explanation. Note that other bodies, such as the China Gold Association (CGA) do state that Chinese gold demand equals SGE gold withdrawals.

The idea for a central gold exchange in China was first publicised in 2000 and grew out of China’s gold market liberalisation strategy which involved the transition from a State / PBoC controlled monopoly on the gold market to a free market gold sector involving a ‘gold exchange’ in Shanghai[5]. The structure of this Exchange, still under the administration of the PBoC, would allow the Chinese State to monitor gold trading in the Chinese market, while giving China’s population access to the wholesale gold market. The Exchange was launched in October 2002, and by 2004, private citizens in China were allowed to trade in and own gold bullion.

Prior to the launch of the SGE in 2002, the Chinese State had for 50 years practised a centralised model of gold allocation in the economy, with the PBoC solely responsible for trading gold in China and supplying the Chinese gold ‘market’ with an adequate allocation of gold each year.

The adjustment from centralised allocation of gold to free market allocation of gold took a few years to reach a stage at which the Exchange was fully playing the allocation role. This is evident from the fact that between 2002 and 2006 inclusive, annual Chinese wholesale gold demand still exceeded SGE gold withdrawals, which meant that SGE gold supply was only partially meeting the national wholesale gold demand, with the PBoC still facilitating residual supply by direct allocation.

Then in 2007 for the first time, physical gold withdrawals from the SGE began to equal Chinese wholesale gold demand. This signalled that the SGE had begun to fully fulfilling its gold allocation function for the entire Chinese gold market.

In 2007, the amount of gold withdrawn from the warehouses of the Shanghai Gold Exchange, the total [wholesale] gold demand of that year, was 363.194 tonnes …”

These supply-demand relationships can be summed up in the following Identities:

It’s instructive to examine in turn each of the components of SGE gold supply. It’s also important at the outset to discuss the concepts of ‘Standard Gold’ and VAT rules as they apply to gold in China, and to appreciate the SGE chain of integrity which prevents gold that has exited the SGE vaulting system from re-entering the SGE vaulting system unless it has been recast into new gold bars by an SGE approved gold refinery.

Specifically, the physical gold ingots /bars deliverable on the SGE Main Board[7] are:

Note that the gold ingots /bars deliverable on the SGE International Board[8] are the 1 kg and 12.5 kgs gold ingots and the 0.1 kg gold bars.

In July 2015, the LBMA and the SGE announced that they would both mutually recognise specifications for 9999 gold kilobars[9], such as weight, dimensions, fineness, marks on bar.[10]

VAT Rules on Gold On and Off the SGE

Furthermore, when Non-Standard gold, for example 200 gram gold bars, is traded in the Chinese domestic gold market off the SGE, it is exempt from VAT. To summarize:

The VAT rules on gold in the domestic Chinese gold market therefore incentivize wholesale gold supply to be traded in the form of Standard Gold through the SGE.

Article 23 of the SGE’s Detailed Rules for Physical Delivery of the Shanghai Gold Exchange states that:

This strict gatekeeping for gold returning to the SGE system is important to bear in mind as it has a real impact on the supply-demand mechanics of the Chinese domestic gold market.

Only PBoC approved commercial banks can import gold bullion into the domestic gold market. Currently there are thirteen banks approved by the PBOC to import gold bullion into China, four of which are foreign banks, namely HSBC, ANZ, Standard Chartered and United Overseas Bank (UOB), and the other nine of which are Chinese banks including ICBC, Bank of China, and China Construction Bank. See BullionStar Gold University article “Chinese Cross-border Trade Rules on Gold” for more details and a list of approved banks[13]:

Chinese cross-border gold trade rules, specifically Article 6 of the PBoC “Measures for the Import and Export of Gold and Gold Products” states that:

In general, gold bullion exports from the Chinese domestic gold market are prohibited. However, a number of forms of gold exports out of China are allowed. These include gold exports via processing trade, China Panda gold coin exports by the Chinese Mint, and small individual limits (50 grams) on individuals legally carrying gold across the border when leaving China.

With gold output in 2016 reaching an estimated 455 tonnes of gold[2], gold mining production in the People’s Republic of China (PRC) is the second largest source of gold supply for the Chinese domestic gold market after gold imports.

Note that overseas gold mining output from Chinese owned mines abroad can also be imported into the Chinese domestic gold market and then refined into Standard Gold by an SGE approved refinery before being traded over the SGE.

Note also that Chinese gold mining companies are permitted to sell Non-Standard gold and other gold products off of the SGE. For example, the large gold miner China National Gold Group Corporation operates its own physical shop outlets / stores in which it sells gold bars and gold ornaments.

Similar to primary gold mining output, recycled gold is also incentivized by the SGE liquidity and VAT rules to flow into the SGE vaults for trading on the Exchange. However, there is no regulatory or government obligation for recycled gold to have to be sold via the SGE. The liquidity and VAT rules merely make it attractive for gold refineries to refine recycled gold into Standard Gold ingots or Standard Gold bars and then to trade these ingots and bars through the SGE.

Importantly however, the measurement of recycled gold as a component of Chinese gold supply is not consistent between the well-known data providers such as the China Gold Association (CGA) and Thomson Reuters GFMS. This is because the various data providers use differing sets of metrics and nomenclature.

Estimates of the amount of recycled gold in the Chinese gold market will therefore vary. The following table lists recycled gold category names used by a number of consultancy firms, and shows which types are included in which sets of gold supply statistics.

Recycled Gold in the Chinese Domestic Market, by Category

GFMS’ recycled gold data focuses only on scrap gold. This includes old gold jewellery sold by consumers and industrial product scrap. Conversely, the CGA data for recycled gold consists of three elements, namely, scrap gold, disinvestment, and a category of recycled gold known as recycled distortion. Some of these categories have a net effect on the gold price and some do not.

Scrap Gold: Scrap gold refers to old gold products (from either jewellery or industrial products) that are sold for cash by consumers at the retail level. Scrap gold boosts real gold supply and has a net effect on the gold price. Both GFMS and the CGA include scrap gold flows in their respective gold supply statistics.

Disinvestment: Disinvestment has an effect on institutional gold supply and also has a net effect on the gold price. In China, any individual or institutional investor can buy gold directly at the wholesale level on the SGE (investment demand) and then withdraw this gold from the SGE. If some of these investors subsequently decide to sell (supply) their gold again, they can sell it directly to a gold refinery. These gold flows are defined as disinvestment and these flows can then make their way back to the SGE vaults for trading on the SGE.

The final category can be labelled as Recycled Distortion, an example of which is “Process Scrap”. Process scrap refers to residual metal left over after fabrication or manufacturing of gold jewellery or industrial products. This could, for example, be from metal spilled during jewellery fabrication. The fabricator sells this scrap to a gold refinery which then reforms the gold into Standard Gold and the gold makes its way back to the SGE. Process scrap gold overstates supply to the SGE and also subsequent demand on the SGE because it has no net effect on the gold price. So both supply and demand would need to be adjusted downwards in this case.

Having looked at the supply side of the equation in the domestic Chinese gold market, it’s important to examine the demand side. Since most gold supply in China flows through the SGE, logically, most gold demand has to be met by SGE gold withdrawals.

The following bar chart graphically captures the supply side and demand side components of the domestic Chinese gold market. Gold supply is broken down into mine output, imports, scrap, disinvestment and recycled distortion. Gold demand is broken down into jewellery demand, coin and bar demand, and industrial demand (all of which are consumer related), and also direct gold buying on the SGE (institutional demand), and finally a recycled distortion component which is the same size as on the supply side. 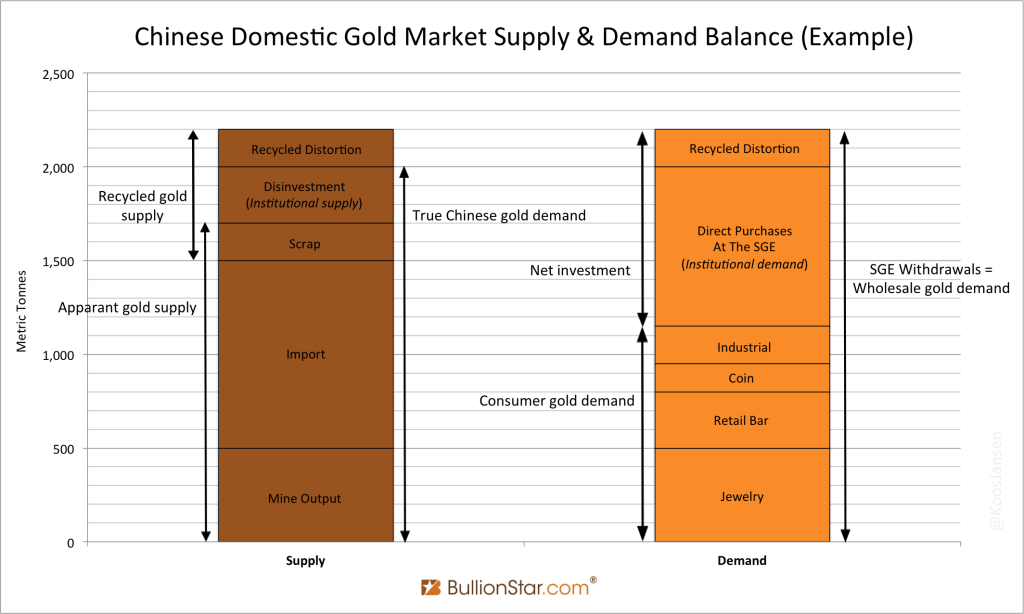 From the above bar chart, it can be seen that the main reason why annual gold demand as defined by, for example, consultancy Thomson Reuters GFMS is far lower than the size of SGE withdrawals each year is because GFMS only estimates consumer gold demand and ignores institutional demand.

On a cumulative basis from January 2007 to September 2016, the difference between SGE gold withdrawals and GFMS gold demand reaches a massive 5922 tonnes of gold, as can be seen in the following chart:

The composition of ‘Direct Purchases on the SGE‘ is also illuminating. In China, anyone can open an account and buy gold directly on the Shanghai Gold Exchange. This includes individual citizens and wholesale enterprises such as jewelry manufacturers and bullion banks. About 50% of SGE gold withdrawals are from wholesale gold manufacturers/fabricators. The other 50% of SGE gold withdrawals are from individual and institutional customers who purchase gold on the SGE and then withdraw it from the SGE vault network.

Some of the difference between GFMS consumer gold demand numbers and SGE gold withdrawals can legitimately be explained by phenomena that would inflate Chinese gold demand, such as inventory / stock movement changes and gold-for gold scrap (process scrap). Inventory / stock movement changes would, for example, be gold that jewellery manufacturers, gold refineries, industrial companies and the mint have bought at the SGE, but not yet sold in the retail market. But after adjusting for these legitimate explanations, whatever is left is genuine gold demand, created by direct purchases from individual and institutional customers on the SGE.

14.^ “Measures for the Import and Export of Gold and Gold Products” People’s Bank Of China, https://static.bullionstar.com/blogs/uploads/2015/11/PBOC-2015-gold-trade-rules-announcement.pdf