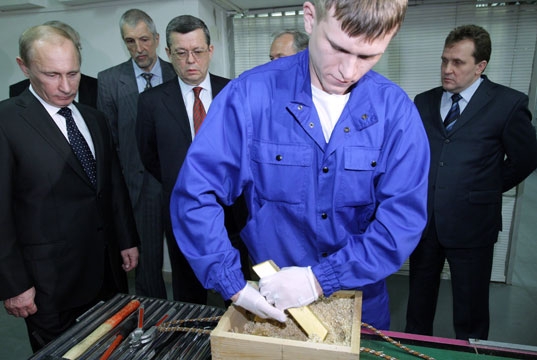 The Russian Federation holds the world’s seventh largest monetary gold reserves of approximately 1600 tonnes, substantially ahead of eighth place Switzerland which holds 1040 tonnes[1]. Russia has achieved this phenomenon by having regularly added substantial quantities of gold to its gold reserves over the last decade. Russia’s gold reserves are owned and managed by the Bank of Russia, Russia’s central bank, and stored in Bank of Russia vaults in Moscow and St Petersburg.

Between 2000 and the middle of 2007, the Bank of Russia’s gold reserves remained relatively constant in a narrow range around the 400 tonne mark. However, from the third quarter of 2007, the Bank of Russia initiated a noticeable accumulation of its official gold reserves, a period which coincides with the onset of the the global financial crisis[3]. This gold accumulation trend by Russia has now continued for over a decade. Notable milestones were surpassed in early 2011 when Russian gold reserves exceeded 800 tonnes, at the end of 2014 when they exceeded 1200 tonnes, and by the end of 2015 when they were within a few tonnes of the 1400 tonne mark.

The Bank of Russia stores two-thirds of its gold reserves in Moscow in a Bank building on Ulitsa Pravdy (Pravda Street), and the remaining one-third of the gold reserves in a building in the city of St Petersburg[4]. Therefore all Russian official gold reserves are domestically held within the Russian Federation.

The Moscow storage vault is known as the Central vault of the Bank of Russia and comprises a space of 17,000 sq/metres, with a storage area of 1,500 sq/metres, and stores both cash and precious metals. The gold stored in this vault is mostly in the form of large variable weight ‘standard gold bars’ which weigh between 10 kgs and 14 kgs (ie Good Delivery bars). The vault also stores some smaller bars (100 grams to 1 kgs bars). The gold bars in the vault are stored in plastic and wooden boxes. In January 2011, the then prime minister Vladimir Putin toured this vault area and was the first Russian prime minister ever to do so.

The Bank of Russia’s reserves consist of foreign currency reserves and gold reserves. The central bank’s annual report states that:

“The gold assets of the Bank of Russia are managed separately from its foreign currency reserve assets.“

Like all central banks, the Bank of Russia states that it manages its reserve assets so as to optimise the balance of safety, liquidity and return. However, the bank doesn’t elaborate on how, if at all, it manages its gold reserves. At a minimum, the Russian central bank merely keeps purchasing large quantities of physical gold each year and throughout each year. In 2015, the Bank of Russia increased its gold reserves by 203.5 tonnes, to finish 2015 with holdings of 1382.5 tonnes. Between January and October 2016, the Russian central bank purchased an additional 165 tonnes of gold, and made a substantial purchase of 40 tonnes in the month of October, which was the largely single monthly addition to Russia’s gold reserves since 1998. The Bank of Russia communicated during 2016 that it was hoping for a 200 tonne increase in its gold reserves during 2016, which is a number that is probably based on the capacity of the domestic Russian gold mining sector to supply this amount to the Bank as well as to meet other Russian gild market demand.

Russia’s monetary gold reserves as a percentage of its total reserves are in the region of 16%, which is a relatively low ratio compared to other major gold holding central banks such as the Bundesbank, Banque de France and Banca d’Italia. However the first deputy governor the Bank of Russia, Dmitry Tulin, clarified in September 2016 that the Bank does not target a specific ratio of gold to total reserves:

“We don’t have an operational target of increasing gold’s share in reserves but it may grow naturally.”[5]

“The Bank of Russia regularly replenishes international reserves with the purchase of gold on the domestic market and the current level of reserves is already “rather comfortable,” it said in the document. The central bank isn’t setting a specific timeline to reach $500 billion, according to the guidelines.”[6]

There is a very interesting model of gold supply in Russia in that a handful of large Russian commercial banks intermediate between the Russian gold producers and the Bank of Russia in supplying gold to the central bank These banks include VTB Bank, Bank Otkritie (formerly Nomos), MDM, Sberbank, and Gazprombank. As per the Bank of Russia 2015 annual report:

“The increase in the Precious metals in physical form item was due to the purchase of gold through purchase and sale transactions with Russian credit institutions under master agreements.”

The Russian commercial banks in turn have entered sales agreements with the Russian gold mining companies to purchase their gold output, and under which the banks provide advance payments that to an extent finance the gold producers. Commercial banks require licenses before being able to trade with the central bank however since many of these large Russian banks are government controlled, this isn’t an issue. VTB Group (which owns VTB Bank) and Gazprombank are majority owned by the Russian Government. Sberbank is majority owned by the Bank of Russia.

“For banks, this is good business — they give credits to mineral developers which repay the banks with the gold they mine. The bulk of gold is later bought by the central bank to replenish its gold and hard currency reserves.”

The ‘Gokhran’ is a Russian state organisation that administers the Russian Federation’s “State Fund of Precious Metals and Precious Stones”[8]. This state fund is known as the Gosfund.

The Gokhran reports to the Russian Ministry of Finance and was established in 1996 by federal legislation. The Gosfund’s investment strategy is to buy, store, and sell various precious metals and gems including diamonds. However, the holdings of the Gosfund are not transparent, and the Gokhran confirmed to BullionStar in 2016 that:

“Gokhran does not publish information about the amount of gold reserves in the Russian Gosfund and data about precious metal operations.”

Given that the Gokhran does not publish any details of the holdings of the Gosfund, it is not clear to what extent the Gosfund holds gold or how much gold it may hold at any given time. However, the Gokhran has been known to make purchases of gold in the past.

As explained in BullionStar’s Gold University profile of the Russian gold market[9]:

“Gokhran has the right of first refusal to buy all precious metals from Russian producers, as long as it provides an element of advance payment to the producer. In practice, the Gokhran has historically not utilised this right extensively, and has left Russian commercial banks as the delegated intermediaries to finance gold producers as well as to buy and distribute the producers’ output, including distributing gold to the Gokhran and the central bank.”

The international reserves position of the Russian Federation, with a breakdown between foreign exchange, SDRs and gold, is updated each month-end date on the Bank of Russia website. The figures are reported in US Dollars, so the quantity of gold reported each month-end can be calculated using the latest month-end US dollar gold price[10].

To get some idea of how the Russian government and Russian central bank view gold, and their rationales for holding so much of it while continually accumulating further gold reserves, its instructive to look at some views from relevant Russian officials. In May 2016, Reuters reported that senior Bank of Russia official Dmitry Tulin said that:

“Russia is increasing its gold holdings because gold is a reserve asset that is free from legal and political risks”[11].

In November 2008, Alexei Kudrin, the then finance minister addressing the Duma said that:

“the volume of Russia’s gold and currency reserves provides a reliable foundation for the country’s macroeconomic stability. Therefore, “one-time shocks can be overcome”[12].

In December 2008, the then prime minister Vladimir Putin said:

“The country’s gold and hard currency reserves, which today, as I said earlier, are the third largest in the world – $450 billion. They are our “safety cushion” and allow us to make things easier during the crisis for millions of people[13].

In June 2010, Putin reiterated this point:

“First of all, it [Bank of Russia] has wisely accumulated gold and currency reserves during periods of steady economic growth. These reserves are more than enough to protect the rouble from global economic shocks. The Central Bank has resumed its reserve accumulation policy in the past few months, and Russia’s gold and currency reserves are among the largest in the world.”[14]

And even as early as 2005, Putin highlighted that the Russian central bank had identified gold reserve accumulation as a critical area to address:

“Its noteworthy that more and more of the Central Bank’s attention is now being drawn to the precious metals produced in the territory of Russia for the formation of foreign exchange reserves (after all, they are called – ‘gold and foreign exchange’, there is nothing to be ashamed of here).”[15]

10.^ International Reserves (including gold) of the Russian Federation, Bank of Russia website http://www.cbr.ru/eng/hd_base/?Prtid=mrrf_m