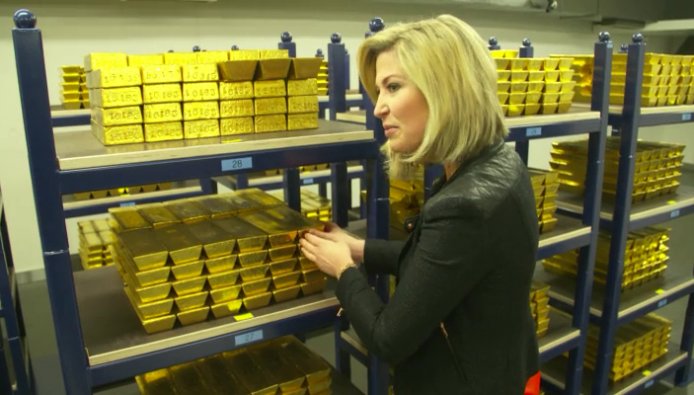 The Netherlands officially reports gold holdings of 612.5 tonnes, making it the 10th largest central bank and official sector gold holder in the world, and 9th largest when excluding the International Monetary Fund’s gold holdings[1]. Media focus on the Dutch gold holdings increased in late 2014 after the Dutch central bank announced that it had repatriated over 100 tonnes of gold back to Amsterdam that had previously been stored in New York.

The Netherlands official gold reserves are owned by the Netherlands state, and managed by the Dutch central bank and Eurosystem member, De Nederlandsche Bank (DNB).

“The Dutch central Bank manages more than 600 tonnes of gold. That gold is of the state and is in essence our national nest egg.”

The Netherlands built up its gold holdings mostly during the 1950s and 1960s similar to a lot of other developed Western European country gold holdings at that time. At its peak in 1978, the Netherlands held 1704 tonnes of gold, and in 1979 it held 1367 tonnes, after transferring 20% of its gold holdings into the European Monetary Cooperation Fund (EMCF). The 1990s and 2000s then saw substantial and sustained gold sales by the Dutch central bank, mostly from its gold holdings stored in New York, but using location swaps at the Bank of England in London, where the DNB gold in New York, which is in the form of US Assay Office melts (packages of 11-22 bars), was swapped with a counterparty for Good Delivery gold in London, and this gold was then sold by the Dutch.

The DNB holds its gold reserves across four locations, three of which are outside the Netherlands. In addition to Amsterdam, the DNB also stores gold at the vaults of the Federal Reserve Bank of New York (FRBNY), the Bank of England in London and with the Bank of Canada in Ottawa.

In November 2014, the DNB retrospectively announced that it had repatriated 122.5 tonnes of its New York held gold to Amsterdam[5]. Prior to this shipment, the DNB held 51% of its gold reserves in New York, 20% in Ottawa, 18% in London, and 11% in Amsterdam. After the repatriation, which only affected the New York and Amsterdam holdings, the DNB claimed to hold 31% of its gold in New York, 31% in Amsterdam, and unchanged percentages of 20% in Ottawa and 18% in London, respectively.

The DNB explained this 2014 gold movement and redistribution exercise as an adjustment in its “gold stock location policy” that it claimed created a more balanced spread of its gold over the existing four gold storage facilities which it said was in line with other central banks’ gold distributions. It also claimed that the gold repatriation would “have a positive effect on public confidence”. This view contradicts somewhat with the DNB’s pronouncement in 2012 that it held most of its gold abroad because “if the Dutch central bank wants to sell some of its gold, we don’t have to ship it”[6].

There were a few notable features of this 2014 gold repatriation exercise by the Dutch central bank. Firstly, it extended the gold repatriation trend that had been started in 2013 with Germany’s repatriation of gold from New York (and Paris) to Frankfurt. Secondly, the Dutch gold transfer was carried out in complete secrecy and only announced to the public after it had been completed, unlike the German Bundesbank repatriation whose “7 year” plan was announced to the public before it had even begun. Thirdly, the DNB claimed to get back a large quantity of gold from the FRBNY in a short space of time, something which the Bundesbank was not able to do.

The DNB gold vault in Amsterdam

Camera crews have, on a number of occasions, filmed footage of the gold bar storage vault area at DNB’s headquarters in Amsterdam, which can be seen in various short videos. The first of these vides were shot in 2012 and 2014[9][10][11]. At that time the gold stored in the DNB basement in Amsterdam was arranged on a series of open plan wooden shelves arranged in various aisles. This was before the October / November 2014 gold repatriation operation which boasted the Amsterdam holdings from 67 tonnes to 190 tonnes.

In February 2016, the DNB issued a press release announcing that it was considering the possibility of relocating the gold stored in Amsterdam to another location in the Netherlands since, according to the DNB, the Amsterdam headquarters building, which dates from 1968, needs to be redeveloped, and the existing vault area puts a security strain on the entire headquarters building[12][13].

In April 2016, Dutch TV channel RTL Z visited the DNB vault and filmed the storage area[14] which by that time had changed to rows of open plan blue metal shelving which looks identical to that used in the Bank of England vaults in London.

In October 2016, the DNB announced that is will be moving its gold (and banknote) storage from Amsterdam to a new facility at “Camp New Amsterdam“. Camp New Amsterdam is located about 60 kilometers south-east of Amsterdam near Zeist, and is the site of an old Royal Netherlands air force base  at Soesterberg which was also used as a US Air Force in Europe base until 2008. Camp New Amsterdam is currently used by the Royal Netherlands Marechaussee, one of the branches of the Dutch armed services, and it will house a new DNB Cash Center which will also store the DNB’s gold, banknotes and coins[15].

On 27 January 2015, the International Monetary Fund (IMF) in its monthly update of central bank gold transactions reported that the DNB had bought 10 tonnes of gold in December 2014. A few hours later on the same day, the Dutch central bank denied that it had purchased 10 tonnes of gold in December 2014[16], but failed to explain how or why the IMF had reported this 10 tonne increase. In its press release, the DNB referred to a spreadsheet on its website which it said reflected its non-changing gold holdings of 19.691 million fine troy ounces of gold since 2008[17][18].

As well as its secrecy surrounding gold sales and gold repatriation, the Dutch central bank is also secretive about an inventory or gold bar weight list of its gold holdings. This secrecy around publishing industry standard weight lists is also common to other central banks in Europe such as the German Bundesbank and central bank of Austria[20][21]. In 2016, the DNB stated to BullionStar’s Koos Jansen that it would not be publishing a gold bar weight list since it was administratively costly[22]:

“DNB is transparent about the amount (weight) and the value of our gold assets. This information can be found in our annual reports. Thereby, several media have visited the gold vault and video recordings have also been made. However, we do not intend to publish a gold bar list. This serves no additional monetary purpose to our aforementioned transparency policy, however it would incur administrative costs.”

“DNB has internal gold bar lists, however the conversion of internal lists to documents for publication would create too many administrative burdens. We maintain our previous email, in which we stated publishing a gold bar list serves no monetary purpose other than transparency.”

This implausible excuse by the DNB is in line with the general non-publication central bank policy regarding weight lists which appears to be a coordinated approach involving the input of the large gold custodians, the Bank of England and the FRBNY.

Although it’s not clear if the DNB engages in gold lending at the present time, the Dutch central bank did engage in gold lending in the 1980s, 1990s and early 2000s via the Bank of England. According to the DNB’s 2005 report “Gold Management of the Bank” (see link in references), the DNB author Jan Lamers stated that:

“DNB has also participated in this market for gold loans. This achieved some small returns on gold. In 1981 the DNB began with a loan of up to 10 tonnes of gold. With increasing demand for gold loans, the maximum size gradually increased to 142 tonnes in 1999; DNB’s share of this market was not that great.”

“Initially the DNB limited (the lending) to gold deposits placed with banks with a maximum duration of three months. This term was consistent with the policy term for time deposits in the currency portfolios. Then, to enhance returns, the maximum term was extended to 12 months, since only a small part of the gold stock was invested for longer maturities (longer than 12 months), and since interest rates were higher.”

“From 2002, the low interest rate on the short-term deposits was not acceptable to the DNB. That is why gold deposits maturing were not extended, and the gold again returned to the vaults of the Bank of England. As a result, the DNB from autumn 2004, for the first time in 23 years, no longer has outstanding short-term gold deposits, however there are still gold interest rate swap contracts.”

In a reply-to-a-set-of-parlimentary-questions in 2011 about the Netherlands gold holdings, the Dutch finance minister stated that:

“DNB heeft mij aangegeven dat zij in 2008 is gestopt met het uitlenen van goud” – ‘The DNB has indicated to me that they stopped gold loans in 2008.’

Given that the DNB last sold sold in 2008 under the second Central Bank Gold Agreement (CBGA2), it is possible that DNB gold sales were merely cash-settled gold lending positions for gold that the DNB did not receive back from the borrower bullion bank.

2.^ “Money and Gold – From the Treasury of the Dutch central bank” DNB brochure https://static.bullionstar.com/blogs/uploads/2016/08/geld-en-goud-dnb.pdf

8.^ “Analysis Dutch Gold Repatriation: Why, How And When” Koos, 26 Nov 2014 https://www.bullionstar.com/blogs/koos-jansen/analysis-dutch-gold-repatriation-why-how-and-when/

10.^ “Should The Dutch Repatriate Gold From The US? Extract from Nieuwsuur January 2012 video, 2 minutes, with English subtitles, BullionStar YouTube channel https://www.youtube.com/watch?v=hvpufQ5pIcc