The Gold Price And Global Flows. The UK Net Imported 152 tonnes In June.

Gross import by the UK from Switzerland remained resilient at 68.5 tonnes, up 11 % from May, while gross export to Switzerland was nix.

The most noteworthy gold exporters to the UK in June 2016 were: 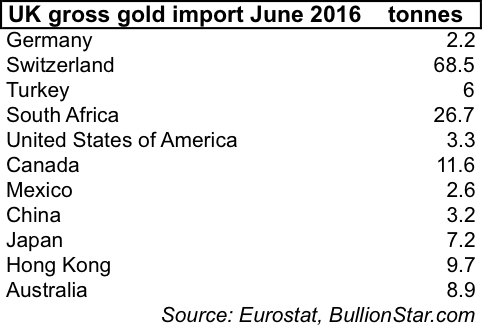 Notable, the UK net imported a record amount from China mainland at 3.2 tonnes. This is very exceptional and has never happened in recent history, as far as I know.

Although the tonnage isn’t staggering, the transfer becomes newsworthy when viewed in perspective. The Chinese have an interest in becoming a dominant player in the international gold market. To strengthen their economy they wish not only for more physical (private and official) gold reserves, another objective is a broad development of gold market infrastructure and integration with the international market. Read what PBOC governor Zhou Xiaochuan had to say in 2004 at the London Bullion Market Association (LBMA) conference :

The establishment and development of China’s gold market marks the basic completion of the construction of a market for major financial products in China, which will provide better micro grounds for China’s macro economic adjustment. For further development, China’s gold market should gradually realize three transformations: from commodity trade to financial product trade, from spot transactions to futures transactions, and from a domestic market to integration with the international market.

…. gold still has a strong financial nature and remains an indispensable investment tool. In major financial centers in the world, the gold market – together with the money, securities and FX market – constitutes the main part of the financial market.

China’s gold market must integrate into the global market. …. China should actively create conditions for its gold market to become an important part of the international gold market.

… gold still bears the marked nature of money under the modern financial system.

In September 2014 the Shanghai International Gold Exchange (SGEI) was erected in the SFTZ, followed by the launch of the Shanghai Gold Fix in April 2016, but up until now both events did not elevate China’s share in the international gold market as the Chinese had hoped for. But the Chinese always set out multiple strategies at once to reach their objectives.

Meanwhile, in the past 14 months four Chinese banks have penetrated the LBMA Gold Price auction. Namely, Bank of China, Bank Of Communications, China Construction Bank and Industrial and Commercial Bank of China (ICBC). In addition, ICBC Standard Bank has become an LBMA market maker for spot trading and a clearing member of “the not-for-profit company London Precious Metal Clearing Limited (LPMCL)” for which it has bought the 2,000 tonnes gold vault from Barclays in May. The vault is located in London.

This enables us to better execute on our strategy to become one of the largest Chinese banks in the precious metals market.

Is it a coincidence that China is suddenly exporting gold to the UK while ICBC Standard Bank was recently accepted as clearing member of the LPMCL and utilizes a gold vault in London? Likely the gold export to the UK is connected to the new clearing and vaulting activities by ICBC Standard Bank. Next to China’s strategy to develop the SGEI for gold trading in renminbi along the Silk Road, they’re actively increasing presence in the London Bullion Market.

However, I don’t think the majority of gold imports into the UK this year – aside from the import from China – are connected to ICBC Standard Bank, the imports mainly reflect Western institutional demand. Net gold flows through London have been correlated to the price of gold long before the Chinese entered the international precious metals construction.

So, although the 3.2 tonnes exported from China to the UK are exceptional, the UK manifesting itself as a net importer while the price is rising is quite normal.

The Gold Price And Global Flows

Here’s a theory hopefully sparking fruitful debate: the gold price is set by physical supply and demand in the West.

Since 2013 when the price of gold declined significantly in all major currencies, we’ve witnessed a massive exodus of physical gold from West to East. In 2013 the UK, housing the London Bullion market, net exported 1,424 tonnes, the highest amount since 1997 when 2,473 tonnes were net exported (source James Turk).

In the 2014 and 2015 the UK continued to be a net exporter. Large wholesale 400-ounce London Good Delivery bars were mainly transported to Switzerland, where being recast into 1 Kg 9999 fine bars for the Asian market. From international merchandise trade statistics we could clearly track the gold flowing from the UK, to Switzerland, to Hong Kong, finally reaching China mainland. We could even see a correlation between UK net export and SGE withdrawals from early 2013 up until December 2015. Currently China is still buying gold, albeit less than in recent years, but the West has turned into a net buyer as well, pressuring supply and forcefully driving up the price.

Some commentators in the gold space deemed it impossible China was importing 1,400 tonnes on average in the past three years while the price was going down. The price was set purely in the paper markets, so they concluded. According to my analysis China was able to buy the tonnages they did by the willingness of the West to supply the metal – exactly who in the West was so eager to supply is another story.

The falling gold price from 2013 until 2015 and the exceptional tonnages China was importing were caused by strong physical supply from the West. Simplified, if 1,400 tonnes are imported into China, one can observe strong demand, but the corresponding supply had to be at least equally strong (or stronger) on a declining price. The nominal volumes of supply and demand are always equal, the difference in strength between both is what sets the price. In my logic, that is. What happened in the past years was that the Chinese were merely buying the physical supply coming from the West, buying as much as they could. A once in a lifetime opportunity.

Remember, if you see 1,400 tonnes being moved into China, that’s a lot of demand, but it’s a lot of supply as well

As stated in a previous post I think the price of gold can be, and is, easily manipulated through derivatives in the short term. Through leveraged futures contracts or derivatives in the highly opaque OTC market the price of gold can be efficiently managed for short periods. But in the long term the price can only be decided by physical supply and demand. If any entity for example desires to suppress the gold price in the long term then physical metal has to be supplied into the open market or an undeniably vivacious spread will appear between the paper and physical price.

What I’m seeing is that physical gold flows across the globe are highly correlated with the gold price. Have a look at the chart below showing the gold price versus the net flow through the UK (and GLD inventory change). There’s a clear correlation.

The same correlation can be seen in net gold flows through Switzerland – which can be considered as a proxy for Western demand just like net flows through the UK. In general, every time the West starts hoarding in the UK and Switzerland the price goes up, and when they sell the price declines. I think these charts show that there is more correlation between the gold price and physical supply and demand than is widely assumed in the gold space. Take this last chart for example. The UK net importing huge amounts of physical gold coincides with the price going up, and exactly when they turn to net exporting the price goes down. So then how can the price have nothing to do physical supply and demand?

On a small side note. I find it remarkable that research (by Ronan Manly, BullionStar, and Nick Laird, Goldchartsrus.com) pointed out that the physical float in London was nearly running out in late 2015 and shortly after the UK starts net importing and the price goes up. When in December 2015 the UK net exported 184 tonnes of gold, which was the third highest amount on record, I wrote In February 2016 [brackets added by me]:

When there is no more gold left in London to export, the gold price is likely to go higher on strong global demand induced by economic headwind.

How much gold is left in London? We can make a rough estimate, ….Research by Ronan Manly … and Nick Laird … pointed out there were roughly 6,256 tonnes of gold in London in June 2015. However, of this total at least 3,779 tonnes was monetary gold owned by central banks around the world stored at the Bank Of England (BOE), which is [presumably] not for sale. The remaining 2,477 tonnes in non-monetary gold were potentially for sale. [Note, this number included 1,116 tonnes in ETF gold outside BOE vaults and 1,355 tonnes stored within BOE vaults, leaving 6 tonnes in the LBMA system outside the BOE]

In any case, we know now that from June until December the UK net exported 390 tonnes of non-monetary gold, which leaves approximately 2,087 tonnes in non-monetary gold in the UK as of 31 December 2015. Assuming the People’s Bank Of China hasn’t purchased some of this gold and covertly exported it to Beijing in the past months.