When there is no more gold left in London to export the gold price is likely to go higher on strong global demand induced by economic headwind. At the time of writing the spot gold price is $1,251.80 per ounce, up 18 % year to date, while the S&P 500 is down 9 % year to date.

In a year that saw strong gold demand from China, in total withdrawals from the vaults of Shanghai Gold Exchange accounted for 2,596 tonnes in 2015, we turn our eyes to the most obvious place for sourcing such quantities of physical gold: London, the heart of gold wholesale market. Since the gold price came down sharply in April 2013 there has been a spectacular drain from the vaults in the London Bullion Market. In 2013 the UK net exported no less than 1,424 tonnes. Whilst net gold export from the UK in 2014 decreased to 452 tonnes, in 2015 the gold exodus from London has accelerated to 573 tonnes. 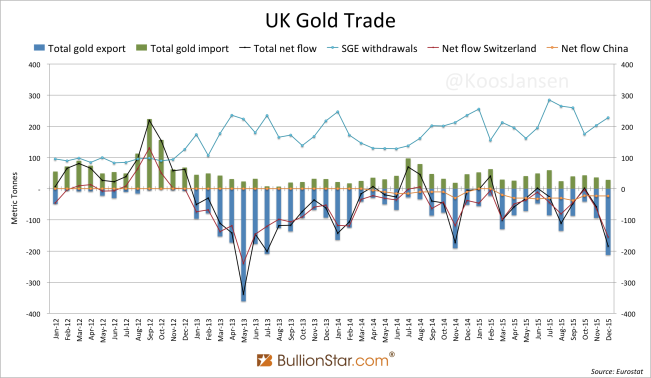 In the chart above we can see a clear correlation between the UK’s net gold export (“Total net flow", the black line) and China’s wholesale gold demand (measured by “SGE withdrawals", the turquoise line), implying gold import by China is supplied, directly or indirectly, by London. In the chart below we can see the same data as in the chart above, but now I’ve inverted “SGE withdrawals" and moved its scale on the right hand side so the correlation is even more clear. 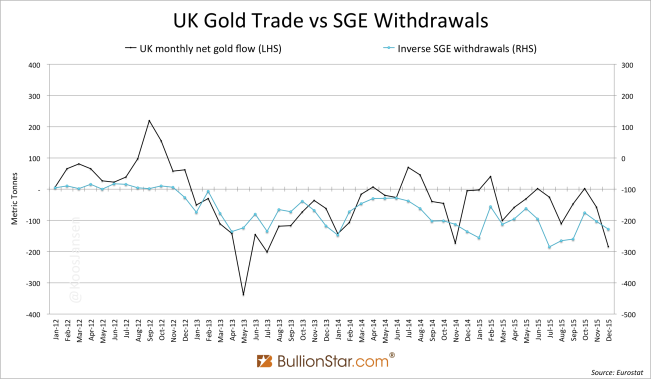 So how come the gold price has been going down from April 2013 until December 2015 while Chinese demand has been so strong? First of all, because the West has been a strong supplier of physical gold. In my view physical supply by the West and the gold price are linked. For instance, if we compare the average monthly gold price to net gold trade by the UK this interconnection becomes apparent.

We can see that whenever the UK is exporting gold the price is declining – and vice versa. Effectively, China has been able to purchase huge amounts of gold by the grace of London selling the metal. But what if London is running out and global demand picks up on the back of failing QE and negative interest rate policy (NIRP)? In that scenario likely the gold price would climb higher, which, coincidentally, is what we’re seeing at the time of writing. Year to date the gold price measured in US dollars has increased 18 % from $1,061 at 1 January to $1,251.80 at 11 February.

How much gold is left in London? We can make a rough estimate, although we don’t know how much of this residual is in weak or strong hands. Research by Ronan Manly from BullionStar and Nick Laird from Sharelynx pointed out there were roughly 6,256 tonnes of gold in London in June 2015. However, of this total at least 3,779 tonnes is monetary gold owned by central banks around the world stored at the Bank Of England (BOE), which is not for sale. The remaining 2,477 tonnes in non-monetary gold was potentially for sale (note, this number included 1,116 tonnes that was allocated as ETF gold in London at the time). In any case, we know now that from June until December the UK net exported 390 tonnes of non-monetary gold, which leaves approximately 2,087 tonnes in non-monetary gold in the UK as of 31 December 2015. Assuming the People’s Bank Of China hasn’t purchased some of this gold and covertly exported it to Beijing in the past months.