Thoughts On The Price Of Gold 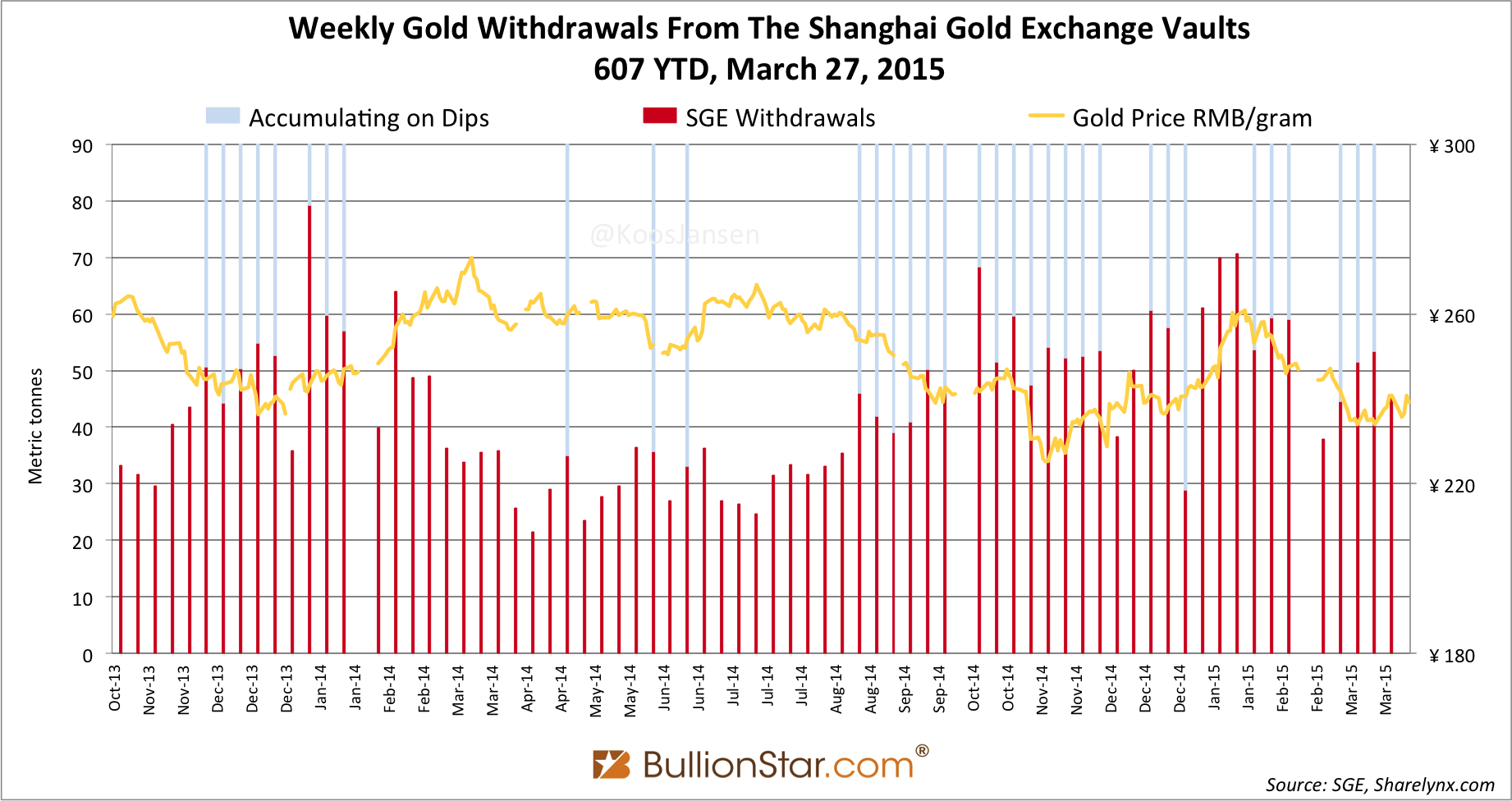 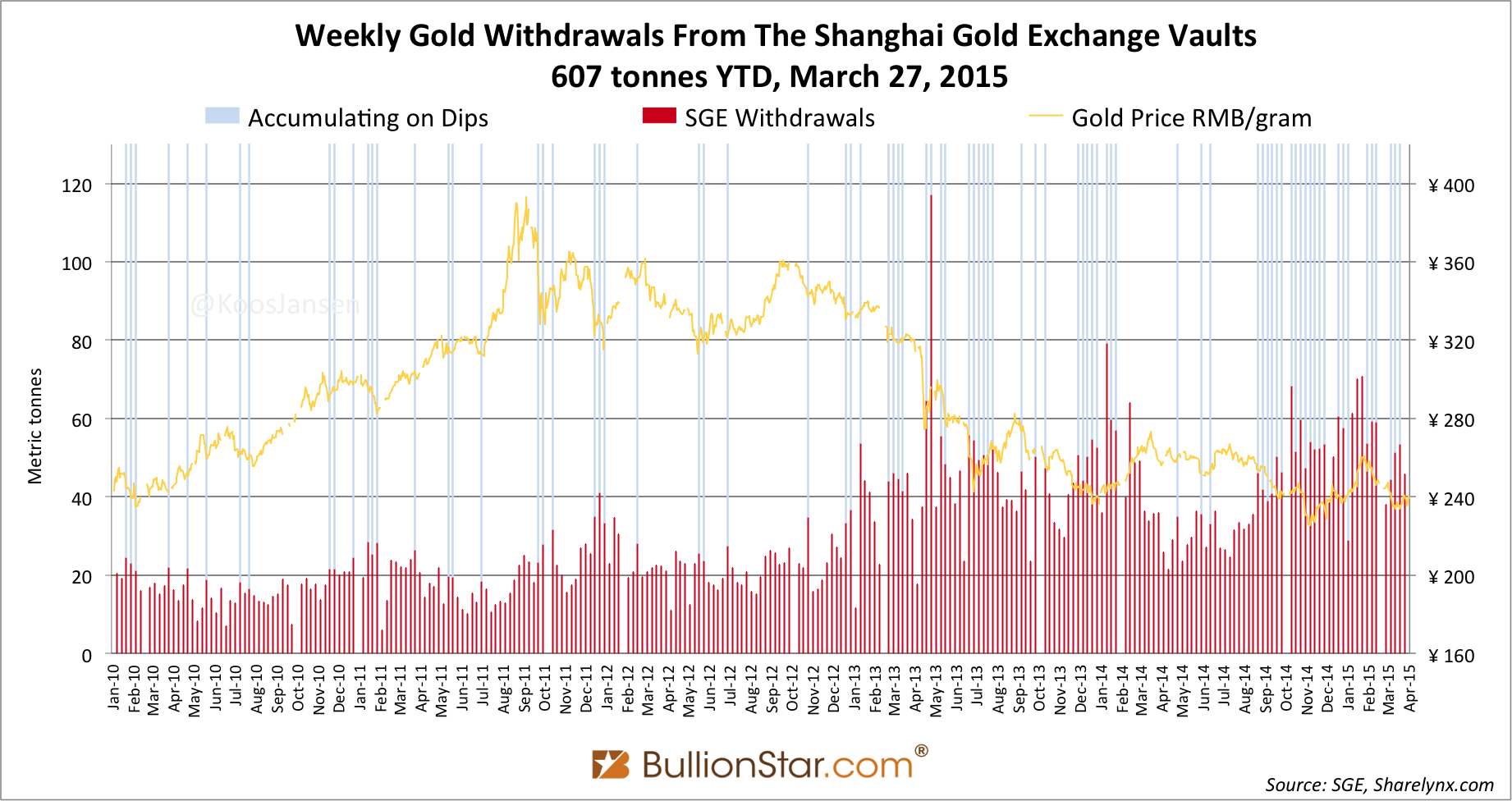 Ever wondered why Chinese demand doesn’t move the price of gold substantially higher? A much perceived analysis in the gold space is that (central) banks suppress the price of gold. While it certainly is in their interest to control the price of gold and there are many clues they do intervene, in this post I would like to approach this subject from scratch, from what I believe is basic economics, hopefully sparking debate.

Thoughts On The Price Of Gold

In any market where goods are traded there is supply and demand. For this post we’ll look at the gold market to examine the relationship between both; there can be people offering gold for sale (supply), meeting people who are willing to buy gold (demand). If a transaction is agreed at a certain price the amount of gold sold (supply) is always equal to the amount of gold bought (demand), it’s impossible supply and demand are not equal by any measure – or one would use different metrics to measure either one.

In the graph below we can see how an increment in demand relative to supply can move the price. 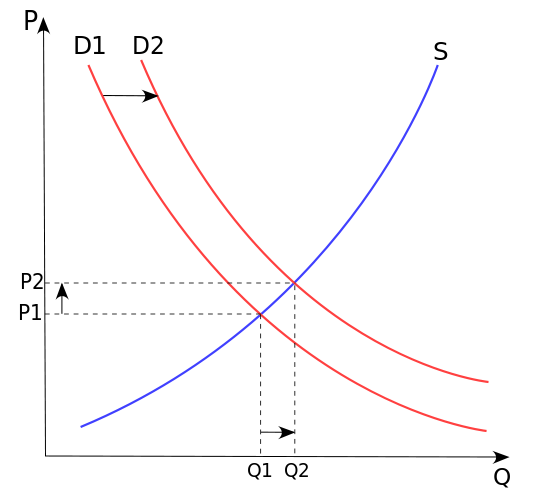 In this example demand increases from Q1 to Q2, while supply remains constant; the price moves up from P1 to P2 for a new market equilibrium.

Technically, if India buys (or imports) 4,000 tonnes a year this doesn’t necessarily mean demand is strong, nor does it mean the price will go up or would have gone up in the process. If supply to India was stronger than demand from India, the price can go down while thousands of tonnes cross the globe (given India has no domestic mine production).

The gold market is quite unique and cannot be compared to other markets, like the potato market. The primary difference lays in the fact that gold can’t be consumed, as it doesn’t corrode all gold is immortal and can be recycled indefinitely. We humans can lose gold, but it can’t vanish. Therefor, all gold mined is added to the total above ground stock. In contrast, potatoes have a limited life span of itself and when eaten are digested. Yearly supply and demand of potatoes is determined by what is produced versus human trends that set our need for consumption.

Additionally, many other aspects determine the volume of supply and demand (the price). To name a few: technical analysis, trust in central banks, financial stability, real interest rates, stock market performance, inflation (expectations), the yield curve, disposable income, the strength of alternate currencies, industrial applications and supply and demand data (for example, if China buys 2,000 tonnes of gold per annum, but analysts worldwide state – for whatever reason – the Chinese buy 1,000 tonnes, this leads to distortion of sentiment as the market will react on false assumptions).

Next to physical supply and demand, the price is affected by gold derivatives – futures, options, forwards and unallocated gold – and the London Gold Fix. Derivatives are leveraged a multitude of physical supply and demand volumes and therefor have an equally greater impact on the price and sentiment, especially in the near term. In derivative markets the price of gold can be easily moved up or down to the likes of big traders in the short to medium term.

Terry Smeeton of the Bank Of England stated at the Australian Gold Conference in March of 1994 (from Frank Veneroso’s Gold Book 1998):

…at least 20 central banks are engaged in swaps, options and futures. This is double the number of banks who were regular players a few years ago.

CME Group, the world’s biggest derivatives marketplace located in the US, launched a program in July 2013 to incentivize central banks outside the US to trade in a number of products, a few of which are Metals Futures Contracts traded on CME Globex, by offering them a special discount (click here to read the details from CME Group). I would be surprised if central banks don’t trade gold futures at this moment.

The London Gold Fix is set twice a day in the London gold market through an electronic, auction-based platform, at which currently seven bullion banks participate. The auction has been under scrutiny as its opaque nature is vulnerable for manipulation. 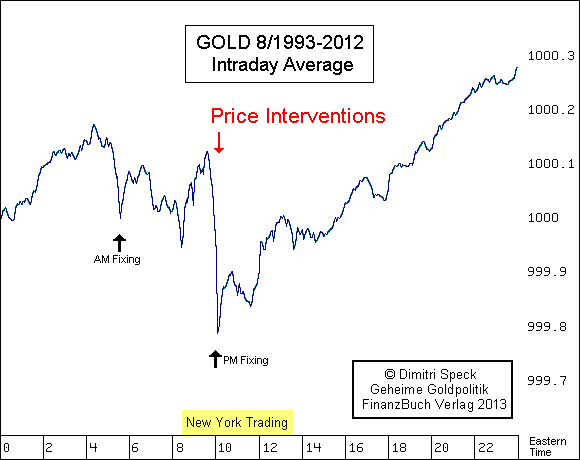 It should be noted that the volume of gold traded in the London OTC gold market is unknown, but estimated to be a few times the size of the futures market in New York (the COMEX).

Derivatives can be used by hedge funds, speculators, bullion banks and central banks to influence the price, subsequently influencing technical analysis and sentiment on which the rest of the market reacts. People can be scared to sell, however, when the price in the paper markets (derivatives) moves up or down, no physical gold owner is forced to sell at the paper prices except for miners. If the paper price goes down and physical demand increases this has to be met by equal physical supply, that is, if the price for physical gold follows the paper price. If the physical price disconnects from the paper price, premiums will appear at one location.

In 2013 the price of gold made a spectacular nosedive, which was followed by an even more impressive flight of physical gold from Western vaults to China. The UK net exported 1,424 tonnes of bullion, China net imported 1,507 tonnes.

According to my logic and textbooks the fall in the gold price and the physical moving east was a stronger force of supply than demand. We could quantify Chinese demand as “strong”, but apparently supply was stronger.

In the Gold Demand Trends Q2 2014, by the World Gold Council we can read:

The rapid 25% drop in the gold price during the April-June period of 2013 sparked a leap in gold demand that we have heard described as a ‘once in a generation’ event.

My point being, if central banks suppress the price of gold, this can only be done if physical gold is supplied to the market. So the question is, who is currently selling gold to China? (Or in the free market since the London Gold Pool collapsed in 1968.)

China is the largest miner of gold at 450 tonnes a year, though to satisfy domestic demand additional gold is imported; in 2013 Chinese net import exploded to 1,507 tonnes, my estimate for 2014 is at least 1,250 tonnes and year to date China has imported well over 400 tonnes. Is this sold by institutional investors in London (the LBMA system) or by central banks? Eventually time will tell. In the meantime I will continue to research how much gold is flowing to Asia and if there is any gold left in Fort Knox (read this and this post for my Fort Knox research).