Did the PBOC covertly buy 1,747 tonnes of gold in London?

This BullionStar blogpost is part of a chronological storyline. Please make sure you’ve read The Mechanics Of The Chinese Domestic Gold Market, PBOC Gold Purchases: Separating Facts from Speculation and The London Bullion Market And International Gold Trade, or it will be difficult to understand the finesses.

This week I listened to an interview with a Swiss refiner which promptly reminded me of an interview I conducted with Alex Stanczyk (currently Managing Director of Physical Gold Fund SP) on 9 September 2013 about what he was hearing from industry insiders on Chinese gold demand. Back then we knew very little about the Chinese gold market and how physical gold across the globe was flowing towards China. This started to change on 18 September 2013 when I published my first analysis on the structure of the Chinese gold market with the Shanghai Gold Exchange (SGE) at its core; a topic that since then has been discussed by researchers at investment banks, in the blogosphere and in the mainstream media. The Western gold space has learned a great deal about the Chinese gold market and global gold flows, though we’re always left with loose ends. For example, the issue regarding PBOC gold purchases; how much gold do they truly have and where was it bought? Does the PBOC buy 400-ounce Good Delivery (GD) bars in London and covertly transports these gold bars to its gold vaults in China mainland, or are the Good Delivery gold bars shipped to Switzerland, refined into 1 Kg 9999 gold bars, sent forward to the Chinese mainland where they’re required to be sold through the SGE gold exchange and from where they can be bought (in clear sight) by the PBOC. The latter would imply that the full gold flow would be visible for anyone with an Internet connection.

Yesterday I re-read my interview with Alex from September 2013 in which he shared information from industry insiders. From Alex (September 2013):

With the knowledge we have now, this quote from 2013 is even more interesting, as it describes what has come together in the past years through several analysis. Consider the following:

…We talked to the head of the largest refinery in Switzerland and he told us directly that all that metal that’s coming out of London is being refined into kilo bars and sent to China, as well as metal that’s coming in from other areas in the world, that’s all going to China. It’s way more than is being reported or moved through the exchanges. All the kilo bars go to the Chinese people but the PBOC is likely only buying good delivery [GD].

There you have it. More clues the PBOC does not buy gold through the SGE (where only gold bars smaller than GD are traded). But there is more.

Although, it’s virtually impossible to track monetary gold flows, the least we can do is try. In recent weeks Ronan Manly, Bron Suchecki, Nick Laird and I conducted a small investigation with respect to how much monetary and non-monetary gold is left in the UK. Luckily for us, the London Bullion Market Association (LBMA) has published a few estimates in recent years about the total amount of physical gold in London (monetary and non-monetary). In 2011, it was 9,000 tonnes. In 2015, it had dropped to 6,256 tonnes – likely all in GD bars. These estimates from the LBMA combined with our investigation have resulted in the next charts (conceived by Nick Laird, Sharelynx): 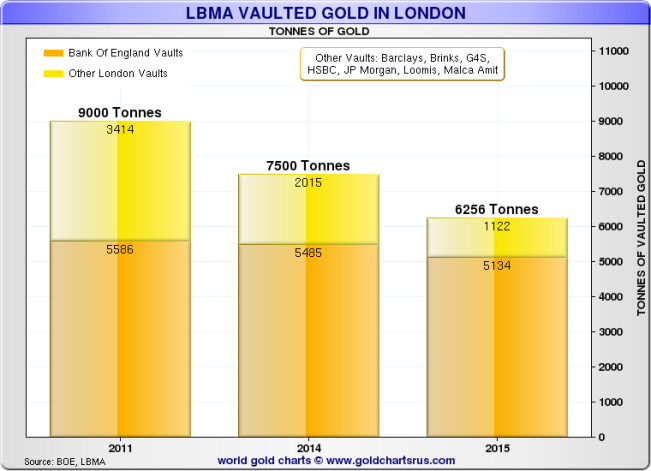 For a better understanding of physical gold located in London you can read this post by Ronan, this post by Nick or have a look at the next diagram conceived by Jesse (Cafe Americain): 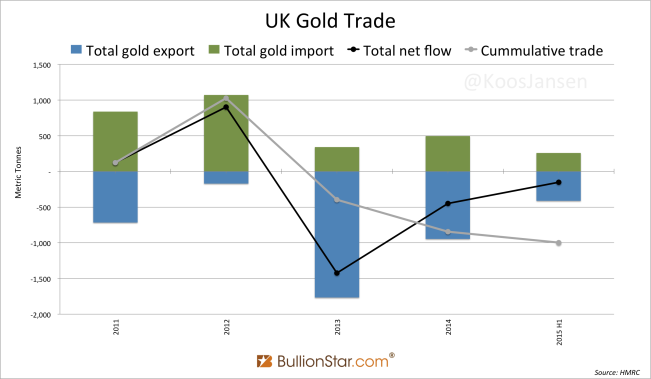 We don’t know exactly when in 2011 the LBMA measured there were 9,000 tonnes of gold in London, but it doesn’t really matter. In the chart above we can see that the most significant movements since 2011 have taken place in 2012 and 2013. If we measure the flow of gold from the UK between 2012 and 2014, the net outflow is 970 tonnes. So it’s not that important when in 2011 the 9,000 tonnes were counted by the LBMA. What is important is that since 2011 not more than 997 tonnes of non-monetary gold has left the UK, according to official trade statistics.

Nick Laird and I noticed that although the total amount of physical gold in London fell roughly 2,744 tonnes (9,000 – 6,256) over four years (graph 1), only 997 tonnes were net exported as non-monetary gold (graph 4). This makes me wonder where the residual 1,747 tonnes (2,744 – 997) went. Possibly, this gold has been monetized in the UK and covertly shipped to a central bank in Asia, for example China. I don’t have rock hard evidence, but it fits right into the wider analyses.

Furthermore, from 2006 to 2011, the UK was a net importer every year. If the 9,000 tonnes estimate by the LBMA was hopelessly outdated, say, it was from 2008, this would increase the “missing gold" even more (as net export over the years would have been smaller than 997 tonnes).

What stands out for now is, (i) the LBMA has stated there were 9,000 tonnes of physical gold in London in 2011 and (ii) gold trade provided by HMRC reflects all physical movement of non-monetary gold in and out of the UK. Both these handles have nothing to do with complicated rules on changes in ownership of gold in London (that I’m aware of). Therefor we must conclude 2,744 tonnes left the UK since 2011, but only 997 tonnes was seen leaving as non-monetary gold. Where did the residual 1,747 tonnes go?

This investigation is far from finished, next I will research historic UK gold tarde – as far back as possible. Hopefully we can find another piece of the puzzle.