One of the main causes some of my colleague gold analysts assume SGE withdrawals are inflated and cannot be used as a measure for Chinese wholesale gold demand, is because of Chinese Commodity Financing Deals (CCFDs). However, this analysis is incorrect as will be demonstrated in this post.

CCFDs are ways for Chinese speculators to acquire cheap funds using commodities as collateral. When it comes to using gold as collateral for CCFD there are two options: round tripping and gold leasing. What is round tripping? Goldman Sachs (GS) has properly explained the process in a report dated March 2014. From GS [brackets added by me]:

Important to understand is that gold in round tripping needs to be physically imported into China and then exported, in contrast to copper. The reason being, which GS fails to mention, that the trade rules for gold in China are different than for all other commodities.

In essence gold bullion is prohibited from being exported out of the Chinese domestic gold market by the PBOC in general trade. For general trade fifteen banks enjoy a PBOC license to import gold.

All bullion imported through general trade is required to be sold first through the SGE, and consequently all gold flowing through the SGE is prohibited from being exported. Detail: a few jewelry companies also have a gold trade license for general trade, but this is insignificant. But there is more to it, which is another form of cross-border trade; processing trade. To explain what processing trade is, it would be best to first describe why it exists.

Since 2002 the State Council is active in stimulating the Chinese population to accumulate physical gold. Through commercial banks the Chinese people are informed about gold’s function in the economy and able to purchase gold granted of the finest quality. They can submit for a gold savings account, speculate in paper gold on the SGE or buy physical gold directly at the SGE, all through a commercial bank as a broker.

Some examples of how state-owned banks promote gold, from the Agricultural Bank China:

Physical gold is both a commodity and a financial product. It can be a gift or collection and may serve as an important investment vehicle for realizing preservation and appreciation. With a distinctive preservation function, physical gold is powerful to defend against inflation.

☆ Considerations
1. Do not stop when gold price is low. Gold price may go up or down depending on the political and economic conditions and many other factors. Only by constant accumulation will the overall investment cost be reduced.
2. Persistence is the key. Investment risk is reduced by the average cost, the longer the investment period, the better in mitigating the impact of the fluctuation in gold price. When the market rallies, the gain will be protected and increase the investment.

The State Council’s strategy is to import as much gold as possible and export nil in order to build a strong economic and financial security barrier for China.

The next illustration demonstrates two types of processing trade. 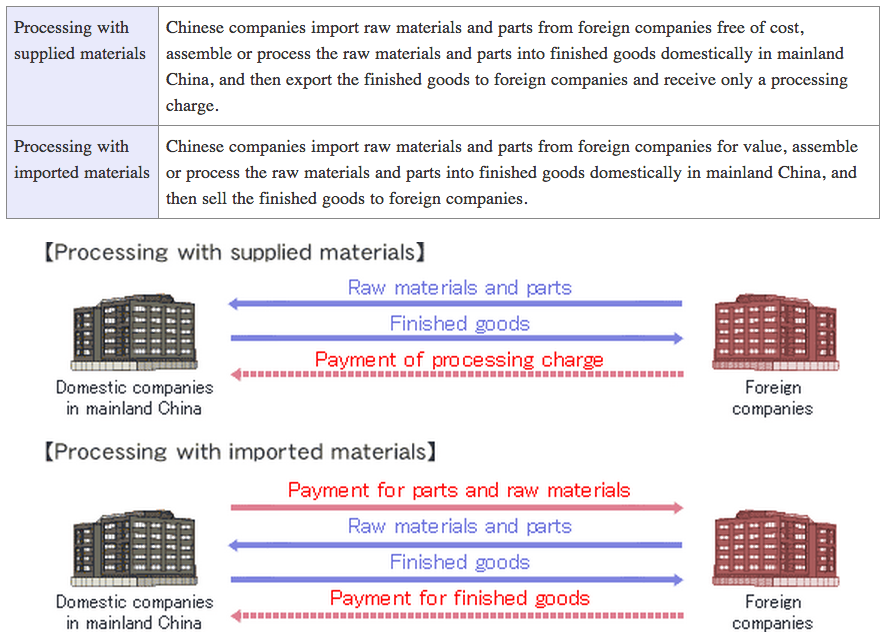 An example for a processing trade would be; gold from Hong Kong is exported to Shenzhen (a CSSA just across the border from Hong Kong and well known for its vast jewelry industry; 4000 manufacturers), then the gold is fabricated into “jewelry” (/changed in shape or form/processed) and imported back into Hong Kong. By the way, this trade would show up in Hong Kong’s customs report, but it wouldn’t affect Hong Kong net export to the mainland.

In the next illustration we can see Hong Kong (representing the rest of the world), the CSSA in Shenzhen and the mainland (the Chinese domestic god market). 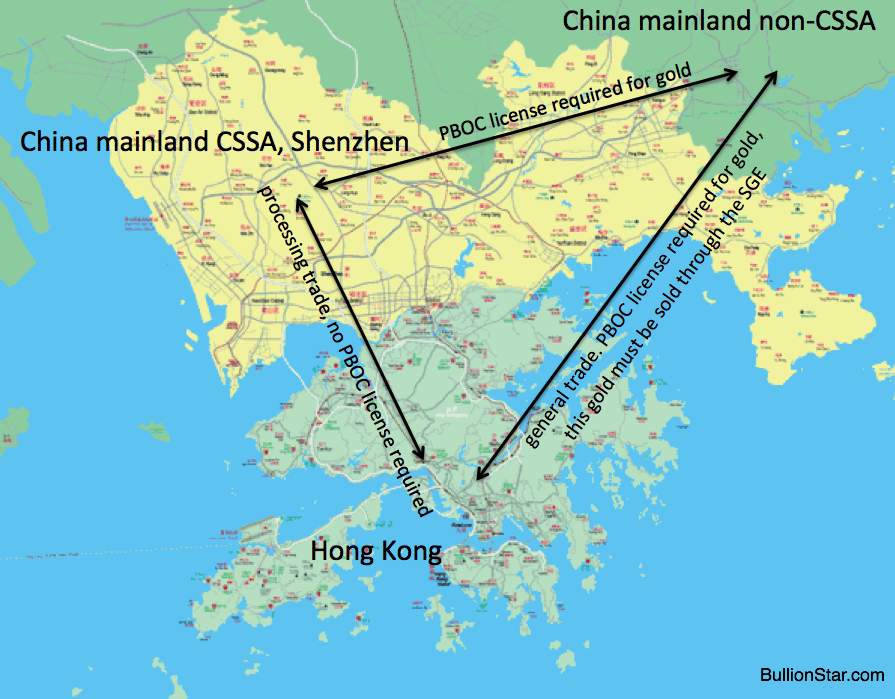 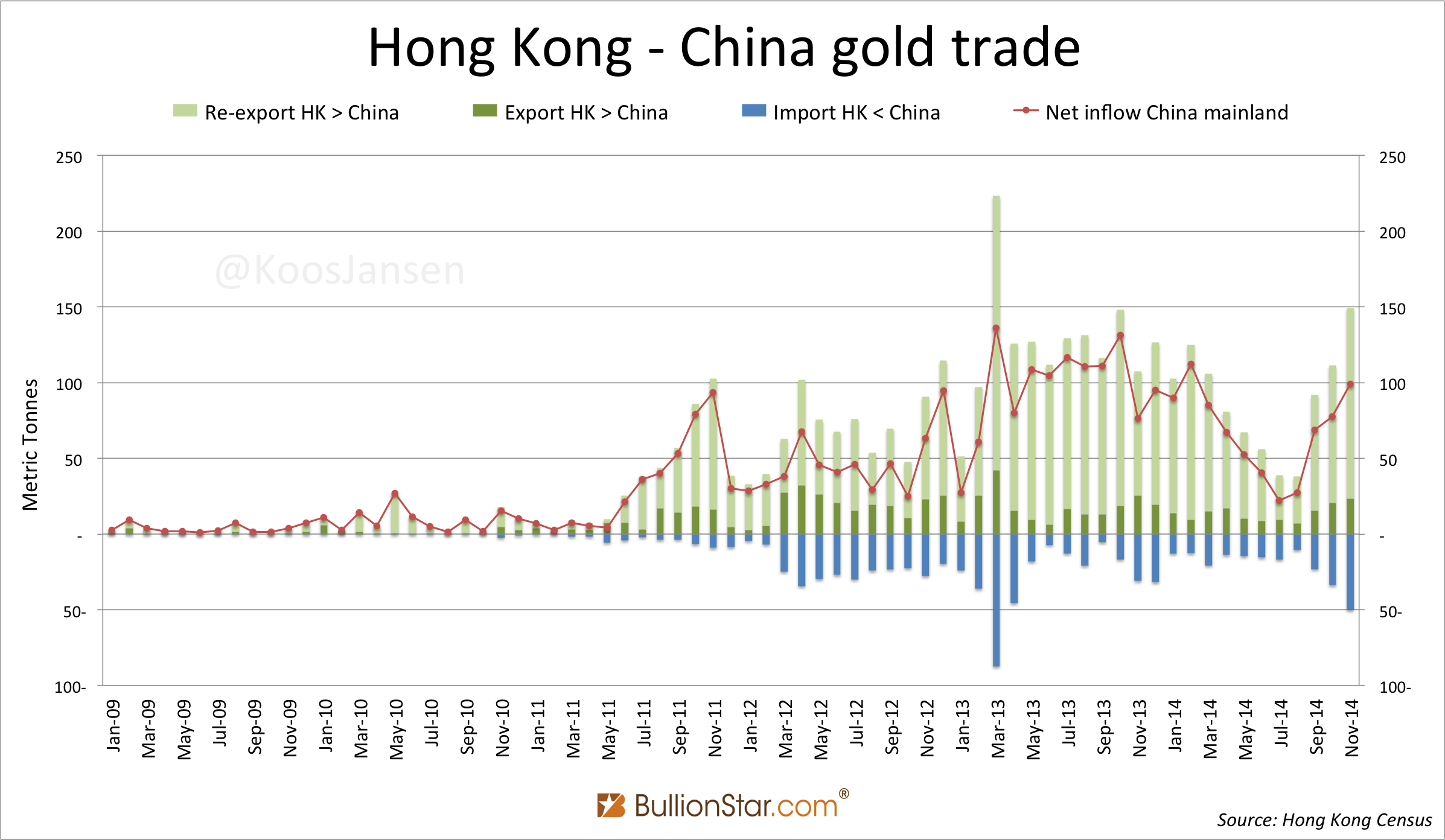 Round tipping by Chinese speculators can only be done through processing trade; it simply isn’t possible through general trade, as in general trade gold is prohibited from being exported. Round tripping flows are completely separated from the Chinese domestic gold market and the SGE, hence, round tripping doesn’t inflate SGE withdrawals. Only by bending the rules, set up a fake gold jewelry company in a CSSA, speculators can import and export gold to round trip. Consequently, GS notes gold needs to be physically imported and exported for round tripping, in contrast to copper.

In theory the gold tied up in round tripping can be at max the amount of gold yearly exported from China (to Hong Kong), at minimum a far smaller amount that is being used in many cycles, in every cycle being counted as import and export. Round tripping doesn’t inflate net export from Hong Kong to China.

The other gold financing deal that can be used by Chinese speculators is gold leasing (which is exactly the same as a gold loan). In general gold leasing is a normal market practice. For the sake of simplicity, I have categorised all potential gold lessees (borrowers) in three groups (gold miners, jewelers and speculators) to have a look at some examples (with US dollars) to learn how gold leasing is done in financial markets:

In China all gold leases are settled through the SGE; both lessor (lender) and lessee are required to have an SGE Account. If a lease is agreed between two parties gold is transferred from one SGE Bullion Account to the other, when the lease comes due the gold is returned. At SGE level it’s as simple as that.

Phillip Klapwijk, analyst with Precious Metals Insights (PMI) in Hong Kong, previous Executive Chairman of Thomson Reuters GFMS and consultant for the World Gold Council, has stated there is 1,000 tonnes of gold tied up in CCFD (not true!). Additionally, he said:

Needless to say I don’t agree. Am I the only one? No. When Na Liu of CNC Asset Management Ltd., visited the SGE in May 2014 he was told by the President of the SGE Transaction Department:

The President of the SGE’s Transaction Department is clearly stating most leasing happens within the SGE system and the metal is not withdrawn. I’m not saying it can’t occur a speculator would withdrawal metal from the SGE vaults, but in general he would not. Therefor, gold leasing by speculators does not inflate SGE withdrawals and therefor does not explain the difference between SGE withdrawals and Chinese consumer gold demand as disclosed by the World Gold Council.

As mentioned before jewelers do withdraw gold from the SGE vaults, but this is eventually to be sold as jewelry. However, the amount of gold leased and withdrawn by jewelers that has not yet been sold as jewelry, is stock inventory (likely hedged in the futures market) and thus can be excluded from gold demand depending on what metric is used.

The WGC had also stated in a report 1,000 tonnes was tied up in CCFD, based on PMI’s data. But, when I send the WGC an email to ask about the details, they replied [brackets adde by me]:

Here the World Gold Council admits gold leases that are withdrawn from the SGE vaults are used for genuine gold business (being part of true gold demand). More confirmation gold leasing does not explain the difference.