Since 2007 China has the largest domestic gold mining output, since 2011 the Shanghai Gold Exchange has been the largest physical gold exchange and in 2013 and 2014 China was the largest importer. Now the Chinese seek to escalate pricing power.

From the beginning of the liberalization of China’s gold market in 2002, the governor of the People’s Bank Of China has been strikingly honest – compared to his Western colleagues – regarding his view on gold. At the LBMA conference in 2004 governor Zhou Xiaochuan stated gold is a currency, an indispensable investment tool and the gold market – together with the securities and foreign exchange market – constitute the main part of the financial market.

China’s gold market must integrate into the global market. Therefore China will further open up the market and quicken its steps toward integrating into the international market.

China’s aim is … to establish a safe and effective system for gold trading and to give full play to the gold market’s function of investment and risk warding, thus promoting the development of China’s gold market. We will strive for this aim with members from the international financial industry, and in particular, the global gold fraternity.

This event [the launch of the SGEI] is a major milestone in China’s opening of its financial market to foreign investors. The Shanghai International Gold Exchange will bolster China’s gold market toward greater trading volume and further highlight the price discovery function of the gold market.

Recurrently, China likes to play multiple hands at the same time: on June 16, 2015, the Bank Of China became the first Chinese bank to participate in the LBMA Gold Price auction process, formerly know as the London Gold Fix. Industrial & Commercial Bank Of China (ICBC) is considering to join the fix as well. By joining the LBMA Gold Price auction the Chinese aim to influence the Western side of the international gold market to a larger extent, most notably the London Bullion Market  which has much weight in setting the international gold price. Concurrently, China is said to be launching its own gold fix in renminbi this year; the PBOC is expected to give approval for a renminbi denominated gold fix anytime now. The multiple hands strategy can also be detected as China is pushing to increase power within Western dominated multilateral institutions such as the International Monetary Fund, while at the same time establishing new multilateral institutions such as the the Asian Infrastructure Investment Bank.

Along the lines of spreading engrossment the SGE has disclosed on June 25, 2015, at the LBMA forum in Shanghai to be in discussions with CME Group (COMEX) about listing each other’s contracts. Allegedly, an agreement will be signed this August and trading may start in the first quarter of 2016. Shen Gang, Vice President of the SGE, has stated her exchange will open a trade link with the Chinese Gold & Silver Exchange Society in Hong Kong and the Dubai Gold & Commodities Exchange as well. Perhaps the most intriguing recent development is the new Silk Road Gold Fund, a 100 billion yuan fund to be led by the SGE – including a Gold ETF Fund, Gold Resource Merger and Acquisition Fund and Gold Investment Fund, which will facilitate gold purchases for the central banks of Silk Road member states to “serve the strategy of the Silk Road and lead the new development of gold”. Official information on the Gold Fund is hard to come by, the best intelligence I could find was an English piece on Xinhua and a Chinese report of the Gold Fund launch event on iFeng (exclusively translated by BullionStar). IFeng wrote:

Representatives from gold and financial institutions talked freely about bringing gold’s superiority into full play, seizing the historic and strategic opportunity of the One Belt And One Road [Silk Road], strengthening the bank-enterprise cooperation and financial-industrial combination, and leading the transformation and upgrading of the gold industry under the economic background of the new normal.

This can be a paradigm shift as one of the institutions that are identified with the Silk Road initiative is the Asian Infrastructure Investment Bank, that has been allied by 57 nations (of which many are Western but with the United States and Japan absent). The Gold Fund is likely to drive gold business through the Shanghai International Gold Exchange. 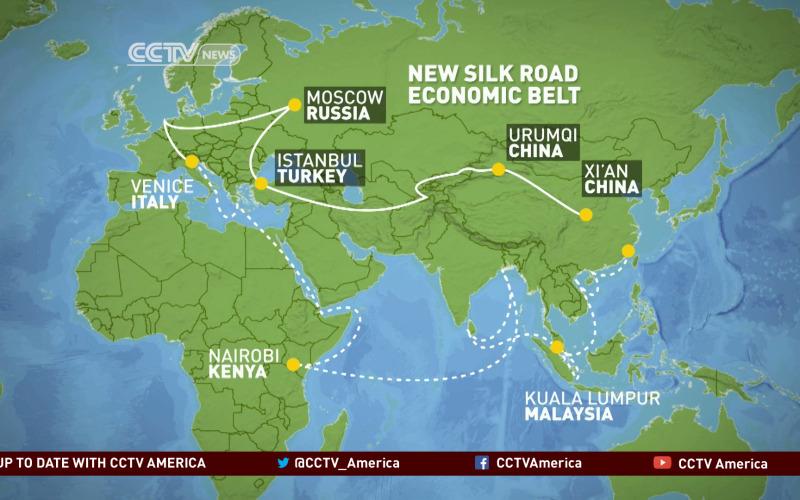 Gold business developments not yet directly related to the Gold Fund, but at this stage said to be part of the Silk Road initiative, are mining collaborations in the Asian region. On May 11, 2015, Chinese gold miner, China National Gold Group Corporation, has announced it has signed an agreement with Russian gold miner Polyus Gold to deepen ties in gold exploration. The cooperation will include mineral resource exploration, technical exchanges and materials supply.

In addition, Chinese mining companies are on a buying spread acquiring other companies: Zijin Mining Group has bought a 50 % stake in Barrick Gold Corp’s Porgera mine in Papua New Guinea for $298 million on May 26, 2015. In Australia, the world’s second largest mining country, Zijin Mining Group already owns Norton Gold Fields and has recently launched a bid for Phoenix Gold next door. Zijin has announced to issue shares worth 10 billion yuan ($1.61 billion) for future acquisitions. From George Fang, Zijin Mining Group Executive Director and Vice President:

Gold is our game. The company is open to opportunities around the world.

Furthermore, on July 1, 2015, the LBMA and the SGE mutually recognized the specifications of 9999 kilobars, the preferred gold bar in China, which will enhance connectivity between the Shanghai gold market and the rest of the world. I wouldn’t be surprised if eventually 9999 kilobars become London Good Delivery. Specifications for Good Delivery have been changed before; in 1954 coin bars (either 899 – 901 or 915.5 – 917 fine) were removed from the Good Delivery list. Currently, only 995+ fine bars weighing 350 – 430 ounces can be subjected to Good Delivery status, but there is no reason why this can’t change.