In any case, the chairman of the SGE, Xu Luode, has been very clear about his intentions with the SGEI. A few snippets from Xu…

…the goal is to build Shanghai into an international gold exchange trading market with global influence.

Foreign investors can directly use offshore yuan to trade gold on the SGE international board, which is promoting the internationalization of the renminbi. The international board will form a yuan-denominated gold price index system named “Shanghai Gold”. Shanghai Gold will change the current gold market “consumption in the East priced in the West” situation. When China will have a right to speak in the international gold market, pricing will get revealed. New York prices gold through bidding whereas in London the gold price is fixed by five banks. However the London gold fixing price is now being questioned since these five banks are price-fixers while at the same time they are also the market’s most important participants.

The Chinese government regards the gold market as an indispensable component of China’s financial market and attaches great importance to its growth and development.

… As national efforts to internationalize the renminbi reach their crescendo, China’s domestic gold market is facing an auspicious window and timing for pursuing its internationalization and greater openness.

… China, India, Dubai and Singapore all enjoy vibrant trading scenes and comparative advantages; however, in the eyes of many investors, the influence wielded by the Asian markets is still very limited as a whole. Using the International Board as a launch pad, China’s gold market will embrace greater openness and foster stronger ties with its neighbors and, together, elevate the trading and pricing influence of Asia in the world’s gold market.

As a reminder, from PBOC Governor Zhou Xiaochuan in 2004:

Despite the declining function of gold as currency in the world, the activeness and development of investment activities with gold as the target indicate that gold still has a strong financial nature and remains an indispensable investment tool. In major financial centre’s in the world, the gold market – together with the money market, securities market and FX market – constitutes the main part of the financial market. The largest spike in volume was on April 8, when total iAu99.99 volume was 31 tonnes for the day (counted unilaterally). Which is still far below the COMEX, where 382 tonnes in gold futures were traded on April 8, though, COMEX gold is leveraged more than 20:1. 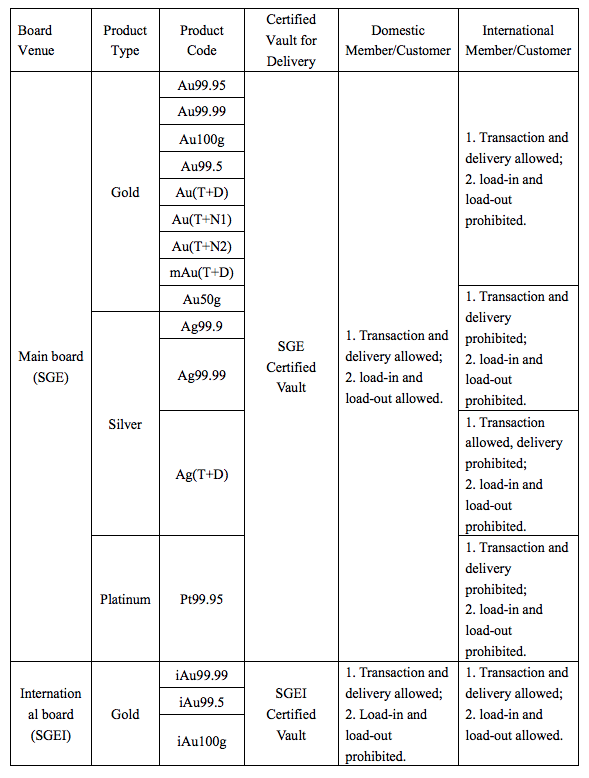 Unfortunately we don’t know who is exactly trading the iAu99.99 contracts, international or domestic members. Nor do we know if the traded gold is withdrawn from the vaults, and if withdrawn, if it’s subsequently imported into the mainland or exported from the Shanghai Free Trade Zone. Based on data released in February and low iAu99.99 volume we could be fairly sure SGEI trading didn’t substantially distort our proxy of Chinese wholesale gold demand, SGE withdrawals. From SGE Withdrawals In Perspective:

For now, the SGE withdrawal distortion ratio is at most 0.0246 (3/122). Measuring Chinese wholesale gold demand conservatively would be

However, now SGEI volume is surging it’s hard to say if this “distortion ratio” is still usable. If the volume is surging the trading pattern can also be changing. We have to wait for new information on withdrawals to come out (believe me I’m trying to get it out) before we can continue to make accurate estimates of Chinese wholesale gold demand measured by SGE withdrawals. Until then, the significance of SGE withdrawals from week 14 is unsure.

The most recent SGE withdrawal data is from week 13 (March 30 – April 3), when SGEI volume hadn’t peaked. In week 13 withdrawals from the vault of the Chinese bourse accounted for 40 tonnes, year to date 647 tonnes have been withdrawn. 647 tonnes corrected by 0.0246 as distortion ratio is 641 tonnes, which is up 9 % from 2014. According to my estimates China has net imported over 450 tonnes year to date. 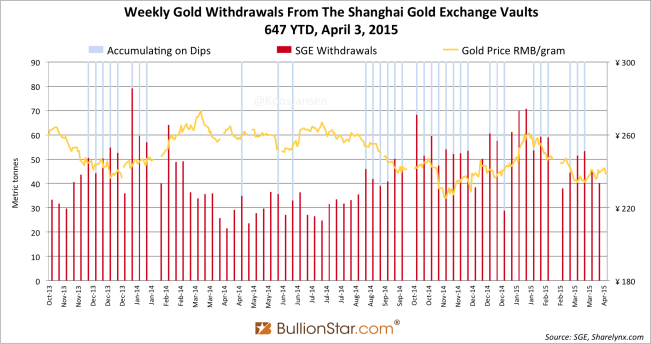 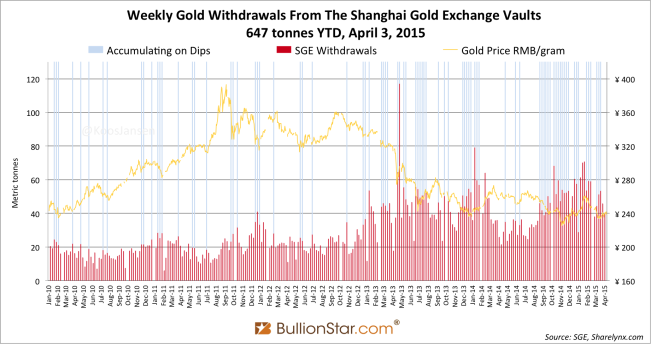 So much for now on the Chinese gold market, keep you posted!