The Redeployment of Asia’s Forex Reserves

China’s New Silk Road initiatives provide it with a way to use its huge pile of foreign exchange, and its gold-buying could lead to more balanced international monetary regime

The New Silk Road initiatives, also known as the “One Belt, One Road" plan, proposed by President Xi Jinping in September 2013, have been joined by over 60 countries and will rebuild and amplify a network of land and sea routes from East Asia to the rest of Asia, Africa and Europe. The multiple projects aim to boost connectivity between Asia, Europe, the Middle East and Africa.

The initiatives include a cluster of finance approaches. Among others these are the Silk Road Investment Fund, Asian Infrastructure Investment Bank, Eurasian Economic Union, ASEAN Economic Community and Shanghai Cooperation Organization. Grounded on long-term finance capabilities, well-defined economic objectives, and the commitment of China and Russia, these projects and the Silk Road region overshadow multiple projects that share one common denominator and shake up the current lopsided global economy, creating a more multi-polar world.

Yet, these projects run risks related to their confusing objectives, and their puny and uncertain finance capabilities exist only on paper.

The Silk Road initiatives stand out for their strong financing backdrop, namely Asia’s large foreign exchange reserves. The emerging Asian holdings of forex, the outcome of over 30 years of policies aimed at promoting export growth, amount to about US$ 5.5 trillion.

The shrinking forex pie is likely due to the sharp weakening of the euro, but this development should not put the region’s economies at risk because emerging Asia remains the primary creditor of the world.

China – holding nearly US$ 4 trillion in forex as of June 2014 – is eager to make better use of this huge pile. In a matter of months, it slashed its forex reserves to US$ 3.7 trillion by May. With the priority of seeking investment opportunities and providing monetary services through the Silk Road initiatives, the People’s Bank of China plans to inject US$ 62 billion of its forex reserves into two state-owned policy banks, the China Development Bank (CDB) and Export-Import Bank of China (EXIM), to support the projects.

Gold and the New Silk Road

Part of the Silk Road initiative is the Silk Road Gold Fund, which aims to raise 100 billion yuan (US$ 16 billion) within five to seven years to invest in gold-related business and mining companies in countries along the Silk Road.

China is the world’s largest producer of gold, and also a major importer and consumer. Among the 60 countries along the Silk Road, numerous Asian countries are identified as important reserve bases and consumers of gold.

Two top Chinese gold producers, Shandong Gold Group and Shaanxi Gold Group, will own 35 percent and 25 percent of the new financing source, respectively. The fund may also include an exchange-traded fund for gold and investments in miners of the precious metal.

The gold fund will be run by a new company, under the umbrella of the Shanghai Gold Exchange, to be established by gold producers and financial institutions, and is expected to facilitate central banks’ redeployment of forex reserves into gold. The fund is to increase gold trading in yuan, internationalizing the yuan and increasing China’s pricing power over gold.

The New Silk Road Investment Fund and the Silk Road Gold Fund are not just a new paradigm of infrastructure finance. Designed to fill the gap of finance infrastructure, these two facilities will enable central banks to diversify and redeploy their excess forex reserves. The gold fund is particularly important to this objective because it will ease gold purchases by central banks in the countries that are part of the New Silk Road development project. In this way, forex reserve managers will benefit from portfolio diversification, and at the same time, they can convert excess reserves into a nearby institution, which guarantees rapid availability to help cool off currency disorders.

The buildup of emerging market reserves from US$ 1.7 trillion at the end of 2004 to US$ 7.7 trillion in 2014 underpinned the global economy. Much of the capital that Asia’s emerging markets absorbed from trade surpluses, portfolio inflows and direct investments was swapped into U.S. and European debt markets, fuelling low interest rates and debt growth in developed economies.

Countries along the New Silk Road are originating a new way to use their savings, and that is a game changer with relevant implications on developed economies, mainly on the U.S. Treasury bonds market.

Russia is swiftly unwinding its U.S. Treasury bond position, from US$ 171 billion in October 2012 to US$ 70 billion in April, down 59 percent. Since January, euro assets held by Russia’s central bank have transcended its dollar assets, at 46.1 percent of total forex reserves, versus 39.6 percent. Russia has also been steadily buying gold; official gold reserves jumped from 403 tons in January 2007 to 1,247 tons in April, up 209 percent. 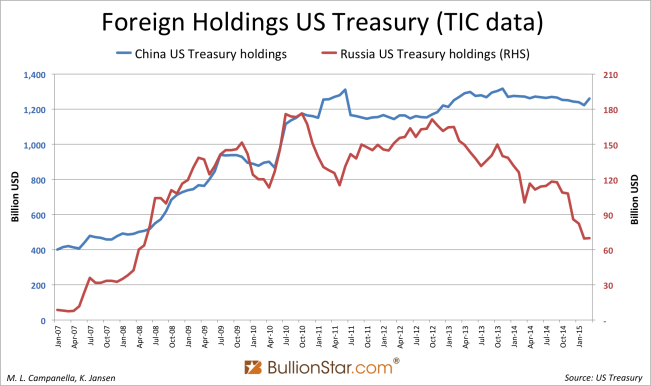 China’s U.S. Treasury holdings have remained relatively flat, at around US$1.2 trillion, since 2010, according to Treasury International Capital estimates. The PBOC claims to have held 1,054 tons of gold since 2009, though it may have three times that amount; estimates vary wildly. It’s an open secret that the PBOC buys gold in the over-the-counter market. How much they have accumulated is anyone’s guess.

In 2014, Alan Greenspan, a former president of the Federal Reserve, said that by redeploying even a relatively modest part of China’s foreign exchange reserves into gold, the yuan could take on unexpected strength in today’s international currency system. Buying gold bullion to displace the U.S. from its position as the world’s largest holder of monetary gold, China would likely incur a penalty for being wrong, in terms of lost interest and the cost of storage. Yet it would be a modest cost, if in the end this clears the way to a multiple and more balanced international monetary regime, less at the mercy of U.S. domestic objectives.

Miriam L. Campanella is a senior fellow at ECIPE in Brussels and associate professor at the faculty of political sciences, University of Turin in Italy. Koos Jansen is a researcher at precious metals exchange BullionStar in Singapore