How The World Is Being Fooled About Chinese Gold Demand

There is a story being told to the masses about Chinese gold demand that is grossly incorrect. The huge discrepancy between numbers from the World Gold Council (WGC) and actual gold demand is so wide yet cunningly hidden I must conclude there is essential information about physical gold demand deliberately kept privy.

Let’s go back to April 2013; the price of gold made a nosedive, which spawned an unprecedented physical buying spree across the globe, most notably in China. Withdrawals from the vaults of the Shanghai Gold Exchange (SGE), that equal Chinese wholesale demand, closed at 2,197 metric tonnes December 31, 2013, up 93 % y/y.

However, the WGC (the global authority on gold) initially stated Chinese consumer gold demand had reached 1,066 tonnes in 2013, an astonishing 1,131 tonnes less than wholesale demand. In the China Gold Association (CGA) Gold Yearbook 2013 it was disclosed China had net imported 1,524 tonnes and domestically mined 428 tonnes. Without counting scrap supply this adds up to 1,952 tonnes; adding scrap total supply has been well over 2,000 tonnes. It’s impossible consumer demand was only 1,066 tonnes.

Finally the WGC admitted their initial estimate of 1,066 tonnes of Chinese gold demand was grossly understated. By email they wrote me on February 12, 2015:

Thank you for emailing the World Gold Council, we apologize that your previous enquiry was missed.

Our figure for Chinese consumer demand in 2013 has since been revised upwards to 1,311.8 tonnes from the original figure of 1,066 tonnes published in the full year 2013 Gold Demand Trends report.

That’s an increase of 23 % by the largest physical buyer on the planet. Although still far from actual demand, 23 % is quite a revision. Was there an official press release from the WGC to inform the world on this revision? No (I’ve asked the WGC, but I got no reply). Did the mainstream media properly cover the 23 % revision? Not that I’m aware of.

Actual Chinese gold demand 2013 has been knavishly hidden from the masses (99 % of the financial industry copies WGC numbers).

In 2014 the WGC again grossly understated Chinese gold demand. SGE withdrawals accounted for 2,102 tonnes, though the WGC stated Chinese consumer demand was only 814 tonnes. Again, a gap of more than 1,100 tonnes. All arguments the WGC has brought up to explain the surplus in the Chinese gold market can only make up about 15 % of the gap (gold-for-gold supply and stock movement change).

For 2014 grossly understating Chinese gold demand wasn’t enough for the Council to distract the world’s eye from China’s gold hunger; more was needed. By a few tonnes the WGC put India’s consumer gold demand ahead of China. In their Gold Demand Trends Full Year 2014 Indian demand is disclosed at 843 tonnes, transcending Chinese demand (814 tonnes) by 29 tonnes, just enough. Most media simply copied these numbers and are stating India is now the world’s largest gold consumer – no critical thoughts added. In my opinion this is the biggest fallacy in finance of our time. 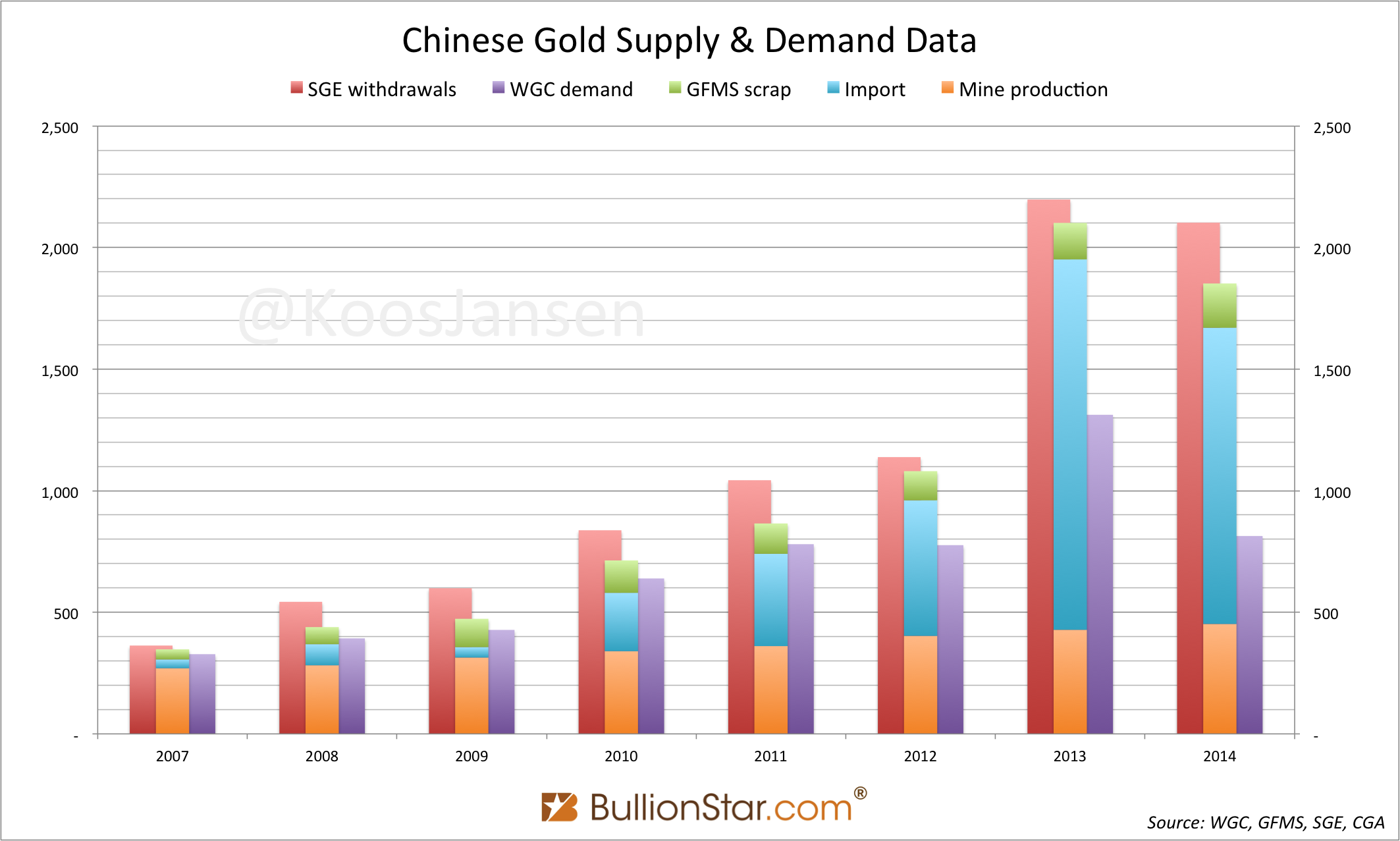 In 2014 China imported at least 1,250 tonnes and domestically mined 452 tonnes. According to GFMS scrap supply was 182 tonnes, adding up to total supply at 1,884 tonnes. But, we’re supposed to believe India is the largest gold consumer on earth at 843 tonnes? Yes.

I’m open minded towards the possibility there is an agenda that is allowing China to buy as much gold for as little fiat as possible to make them accumulate whatever necessary before a monetary reset. I see no other explanation for the events unfolding in front of our eyes.

Can you imagine what would have happened to global gold sentiment if the WGC had disclosed 2013 Chinese demand at 2,100 tonnes and 2014 Chinese gold demand at 1,850 tonnes? Sentiment would have been influenced to say the least.

As I wrote in my first post on why SGE withdrawals equal Chines wholesale demand September 18, 2013:

If you think about it, the redistribution of gold is the only logical thing to happen given the state the world economy is in. … gold has to go to China in order to equalize the chips.

Luckily my camp is growing. More and more analysts are using SGE withdrawals as a proxy for Chinese wholesale demand instead of inaccurate WGC data. CNC Asset Management wrote in a newsletter September 25, 2014:

To understand China’s real physical gold demand, investors should simply look at the weekly withdrawals from Shanghai Gold Exchange vaults. We visited the Shanghai Gold Exchange (SGE) in May and talked to the senior executives of the exchange. After reviewing the exchange’s trading mechanism, we are of the view that the weekly withdrawal figures provide a much more accurate data series that reflects China’s aggregate wholesale demand in a timely way.

It follows from this opaque picture of Chinese supply and demand that some observers, including ourselves, have decided Shanghai Gold Exchange (SGE) deliveries data provides the best window on what might be happening on the demand side in China. (There are a number of observers who have noted the widely circulated estimates of gold demand are woefully inaccurate, precisely because these data are so significantly lower than SGE deliveries data.)

Latest data from the SGE shows withdrawals in the last five days around Lunar Year (February 16, 17 and 25, 26, 27) accounted for 38 tonnes. Total SGE withdrawals in the first two months of 2015 surpassed 410 tonnes. SGE withdrawals Q1 can reach 550 tonnes or more. However, don’t expect Chinese gold demand published by the WGC on Q1 to be anywhere near these figures.