Where Did The Gold In Fort Knox Come From? Part One

In contrast to what is widely assumed, the gold in Fort Knox has not mainly been supplied by gold coins in circulation in the United States before the Great Gold Confiscation by President Roosevelt in 1933.

Whilst me and Mr. Manly are researching how much gold is left in the vaults in the United States – at the Federal Reserve Bank of New York (FRBNY) and at Fort Knox – I thought it would be useful to examine historic US mining, minting, refining and gold trade data as far back as possible. Through historic USGS Mineral Yearbooks, Federal Reserve Bulletins and US Mint Annual Reports I was able to find detailed information. Additionally I used the books Currency Wars, The London Good Delivery List 1750-2010 and War On Gold for references. Our investigation starts before World War II.

To get a better understanding of the monetary era we’re investigating it’s important to understand there are many varieties of the gold standard. For example, a gold coin standard, the classic gold standard, the gold exchange standard and Bretton Woods. Without exception it’s a monetary system whereby, at least a part, of the money supply is backed by gold at a fixed price; the monetary unit is tied to a certain weight of gold. Countries participating maintain these fixed prices by being willing to buy or sell gold to anyone at that price.

What was the weight in gold of one US dollar before World War II?

In 1932 the price of gold in the US was still fixed at $20.67. In the next screen shot from the USGS Mineral Yearbook we can see the historic data of the gold price in the US since 1792 and the value denominated in the $10 gold eagle coin.

The Great Depression in the US started on October 28, 1929, Black Monday, when the Dow Jones Industrial Average fell 12.8 % in one day. When Franklin Delano Roosevelt (FDR) became President on March 4, 1933, his ambition was to boost the economy by devaluing the dollar against gold – raise the price of gold. But, was that possible when gold coins with a fixed price engraved on it circulated in the economy? No. This is why FDR ordered all American citizens to sell all their gold coins and bullion, through Executive Order 6102, to the Federal Reserve in exchange for $20.67 paper dollars per ounce.

When all gold from the American people was tricked out FDR could raise the price of gold; the US proceeded to purchase gold in the open market in October 1933, steadily devaluing the dollar against gold. 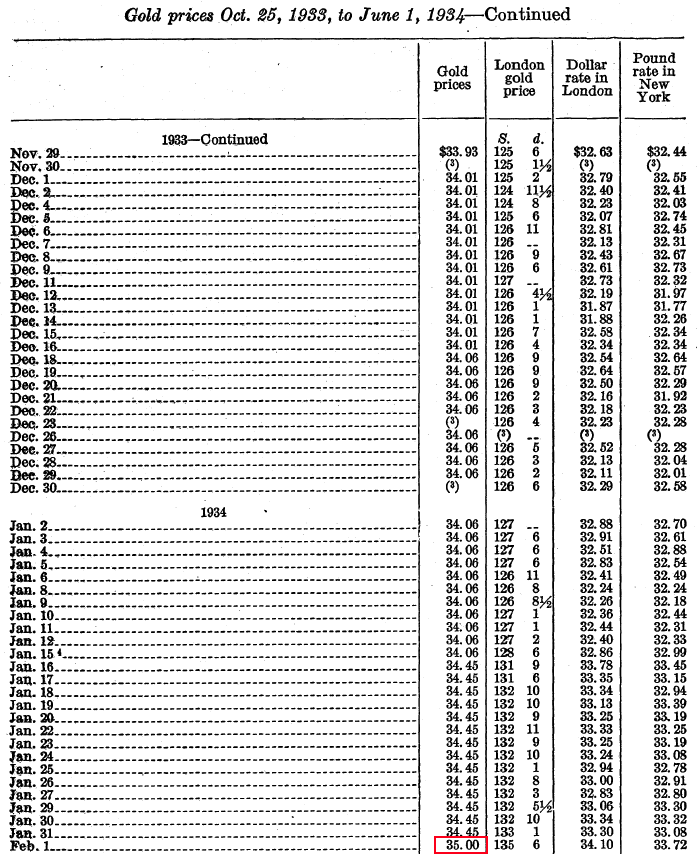 By February 1, 1934, the price of gold had reached $35 per ounce. In four months the dollar was devalued by a staggering 70 %. Although the citizenry was prohibited from owning gold since 1933, the dollar price of gold was still fixed and foreign central banks could still exchange dollars for gold at the US Treasury; from an international perspective the US remained on the gold exchange standard that was implemented after World War I.

There is a well-known document from the World Gold Council (WGC) that discloses the historical official gold reserves of all major economies in the world; based on the numbers from this document I previously made the following chart.

From additional sources I previously assumed most of the US official gold reserves build-up after 1933 was sourced from gold in the US domestic market. I’ve read many analyzes on how all the gold coins (900 fine) were taken out of circulation, melted into coin bars (900 fine) and transported to Fort Knox. The book War On Gold by Antony C. Sutton, published in 1977, discloses the unaudited reserves held by the US Mint on November 30, 1973.

Without a doubt most coins (and bullion) privately owned in 1933 in the US were confiscated and melted into coin bars to be added to the Federal Reserve’s Stash, which in 1934 flipped ownership to the US Treasury. But, how many coins were confiscated? And where exactly did the 13,041 tonnes added to official reserves in between 1933 to 1940 come from?

Coins In Circulation Before 1933

How many gold coins circulated within US borders before 1933? Probably impossible to say exactly, but we can make an estimate.

The US mint was founded in 1792, form the Annual Report Of The Director Of The Mint (page 103) for the fiscal year that ended June 30, 1932, we can read roughly 6,700 tonnes of gold were minted into coins since its inception. 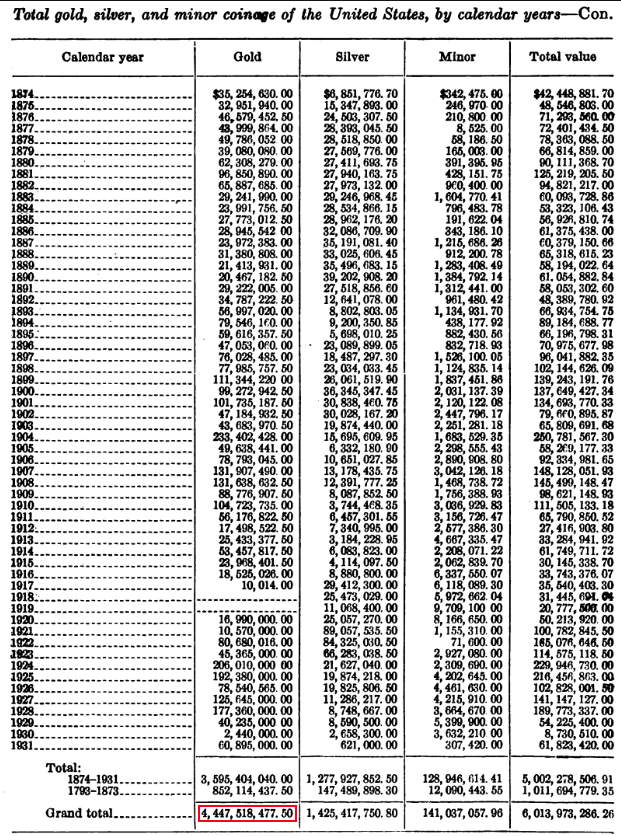 We must consider not all these coins remained in existence; as the economy developed coins were melted into bars, to be stored at banks in return for dollar bills, or they got worn out and re-melted at the Mint. Additionally, we must consider trade; US coins were exported and imported – as well as foreign coins (foreign coins that came into possession of the US government were melted into bullion).

Calculating how many coins were re-melted, refined into bullion, exported or lost would be a very time consuming task, luckily the US Mint has done this for us. Periodically it used to make estimates of the value of gold coins present within US continental borders.

Stock of domestic coin.-Consists of an estimate made in 1873 of gold and silver coin, the former of which was revised in 1907, with annual addition of new coinage and reported imports, and deduction of withdrawn coin, reported exports, and an estimate for industrial use; since 1928 the additional factor of old coin “earmarked” or set aside for foreign owners, has been considered, such transactions being equivalent to exports and releases thereof being equivalent to imports.… The monetary stock tables for a series of years have been revised back to the establishing of the Federal Reserve System (1914) to include earmarked gold,… The item of coin withdrawn as used in the stock compilation omits the coin received for recoinage but not yet reviewed, which coin is subject to classification adjustments.

That sounds like a fair estimate. So how much is it? From page 111: 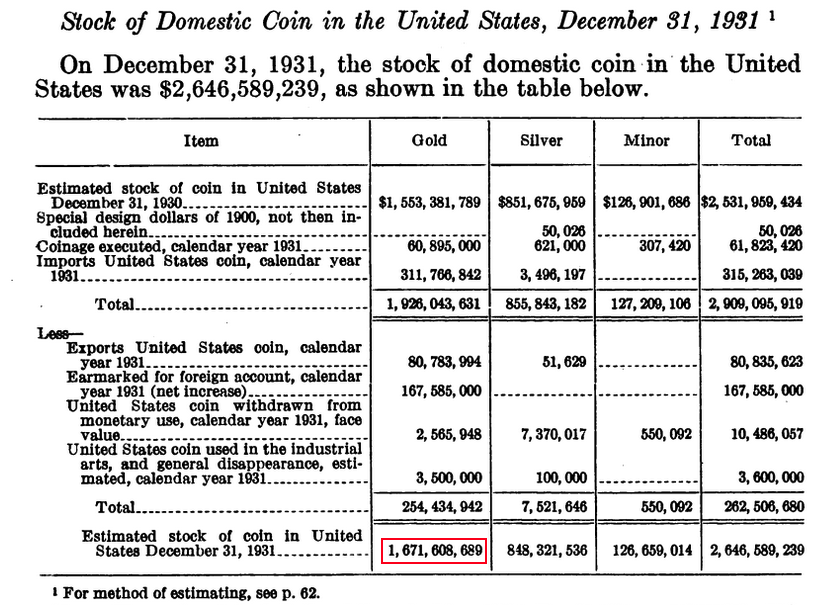 My assumption is that this total was held in people’s wallets, homes or at banks as deposits. In the Mineral Yearbook 1931 we can see how much gold in the form of coins was held by banks (and the government): 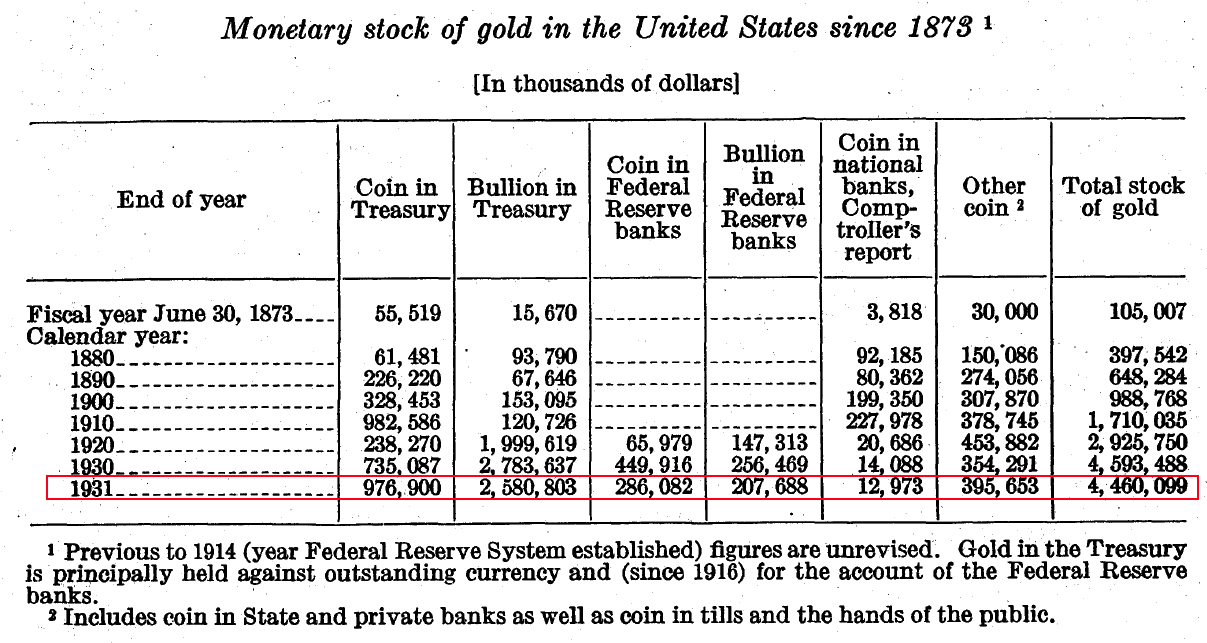 The first thing we notice in the above table is that all Coin and Bullion categories summed up do not equal Total stock of gold in 1931. For other years the categories do add up, perhaps there is a category not disclosed in the 1931 line. Processing the numbers we have gives:

Strikingly, in another table from the US Mint Annual Report (page 113) it’s disclosed $408,626,457 in Gold coin and bullion was in circulation, which equals to 614 tonnes. 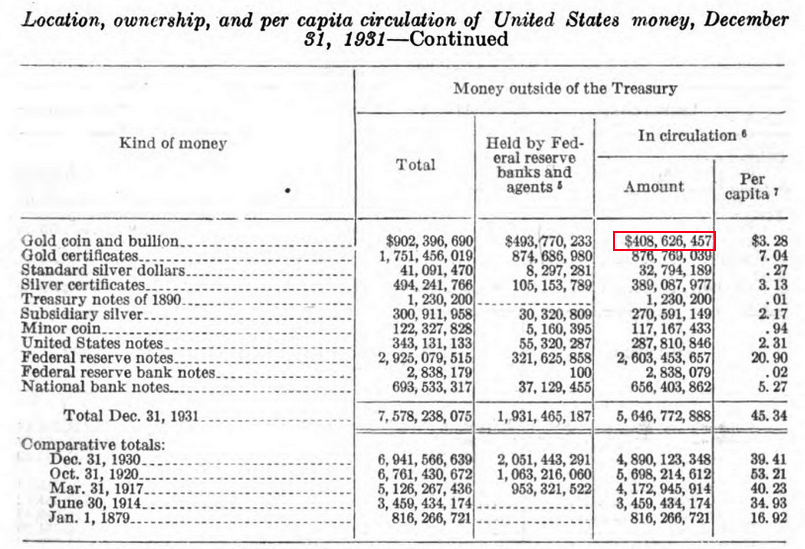 Please note to what degree coins were used in the economy at that time. In The London Good Delivery List 1750-2010, by Timothy Green, it’s stated:

In 1919 the (fixing) price was now quoted for 400-ounce / 995 Good Delivery bars, rather than the traditional 916 standard coin bars which rapidly became extinct as minting of coin virtually ceased… In 1929 the Wall Street crash ushered in financial and economic instability, reflected by large international movements of gold coin, melted coin bars and bars of uncertain provenance. All had to be refined to Good Delivery status…

More confirmation the use of gold coins dropped long before 1933 we can read in the Federal Reserve Bulletin, published December 1, 1917:

Following is a circular letter issued on November 21 by the Federal Reserve Bank of Philadelphia:

To the banking institution addressed:

For your information your attention is again directed to a letter on the use of coin-counting machines, issued by the Federal Reserve Board some time ago, but which is especially appropriate at this time, reading as follows:

The use of gold coin in machines for counting money has proved that there is quite a serious abrasion of the coin. This draws attention to the fact that in our country, as well as in Europe, the use of gold coin as currency in the hands of the people is disappearing. The public does not want to carry gold coin, and its use leads to rapid abrasion and consequent loss of value. In the United States it may be truly said that as a practical matter coined gold is only used as security behind gold certificates, or for foreign exchange purposes, where nothing else can be used in adjusting international balances.

Not that many gold coins circulated in the American economy before 1933 and it’s impossible these have filled Fort Knox after the Great Confiscation. Why is this the story many experts have told us about Fort Knox?

US Historic Gold Import And Mine Output

The incredible surge in US official gold reserves after 1933 was mainly sourced from imports. 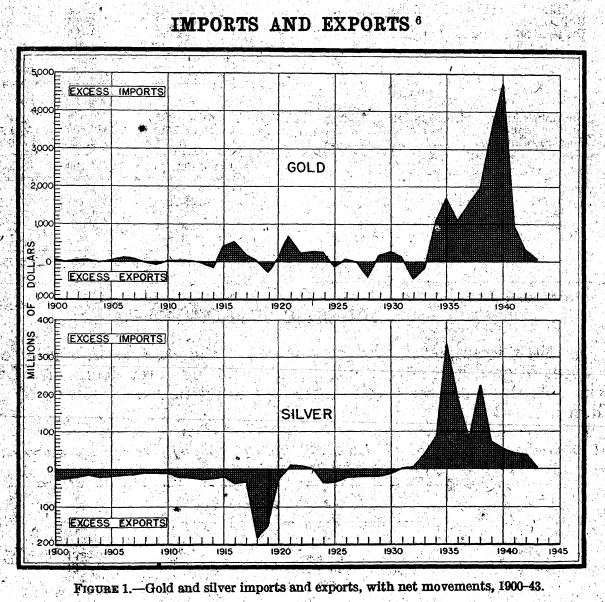 From historical USGS Mineral Yearbooks and Federal Reserve Bulletins I’ve collected all trade data and plotted a chart starting in 1932 – because before 1932 no substantial net flows occurred. 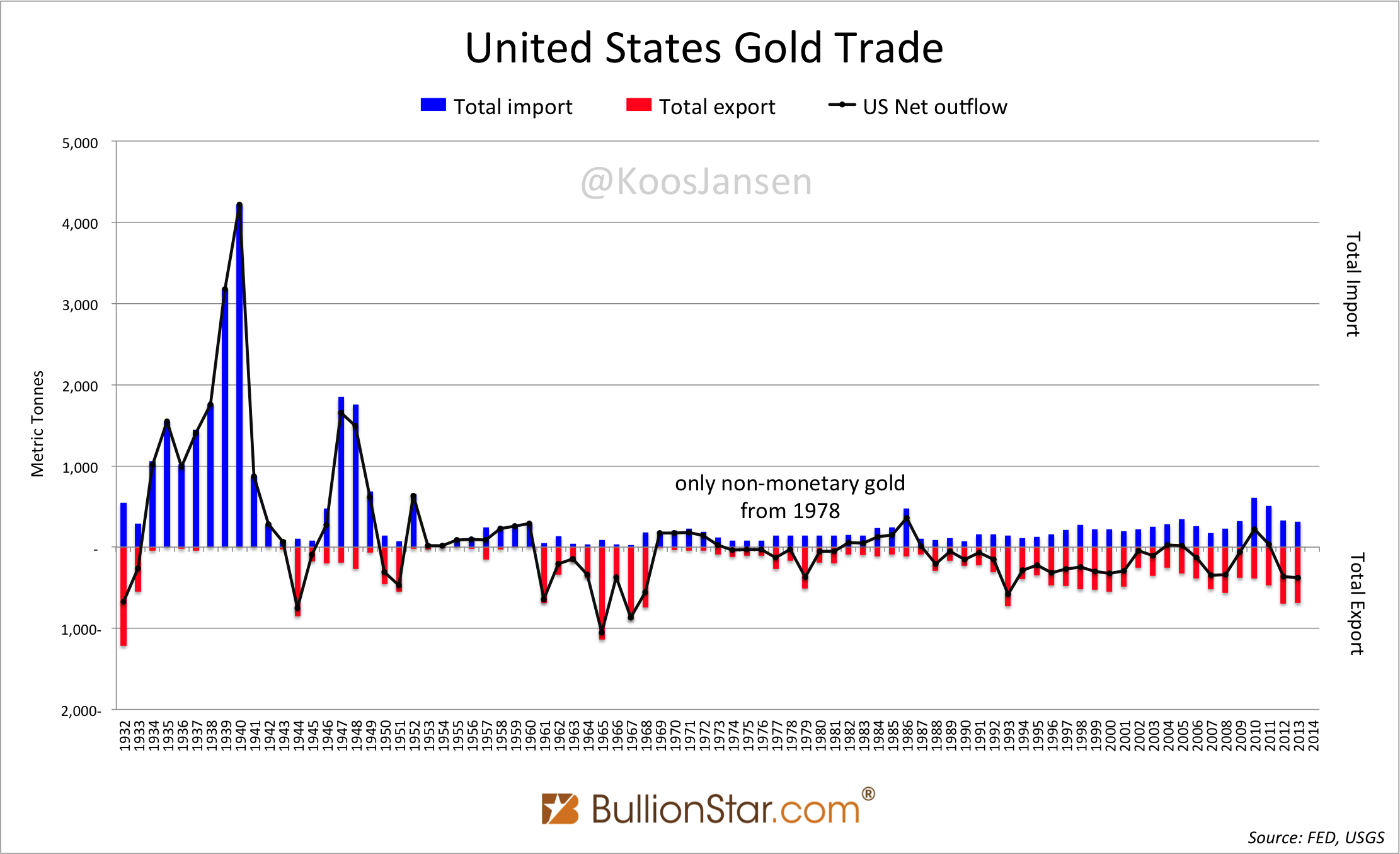 When the US dollar price of gold was raised to $35 this triggered a huge flow of gold from Europe that hit the shores of the United States. From The London Good Delivery List 1750-2010:

In 1934 United States Assay Office was instructed to buy at that price [$35] all gold offered. “A flow gold commenced … which quickly reached flood proportions,” Samuel Montagu’s Annual Bullion letter commented. “Never before has such a huge movement of gold taken place in so short a time.… Accommodation of all mail steamers was booked well ahead and many other vessels than the regular liners were pressed into service as bullion carriers …. The US Treasury officials were overwhelmed by the inrush and at first there was considerable delay in making settlement for gold tendered.” Montagu estimated that at one moment almost 1,866 tonnes was on hold in London in private holdings, by the government or individual accounts. The mélange of bar markings added to the problem.

… given the flows across the Atlantic in pursuit of $35 (which Fort Knox in Kentucky was soon being build to house). The central banks of France, the Netherlands, Switzerland and Italy sold over 2,000 tonnes before the end of 1936.

In 1939 a limited gold trade was tightly regulated by the bank of England. Gold flows continued to the US as European central banks were forced to sell their shrinking stock. 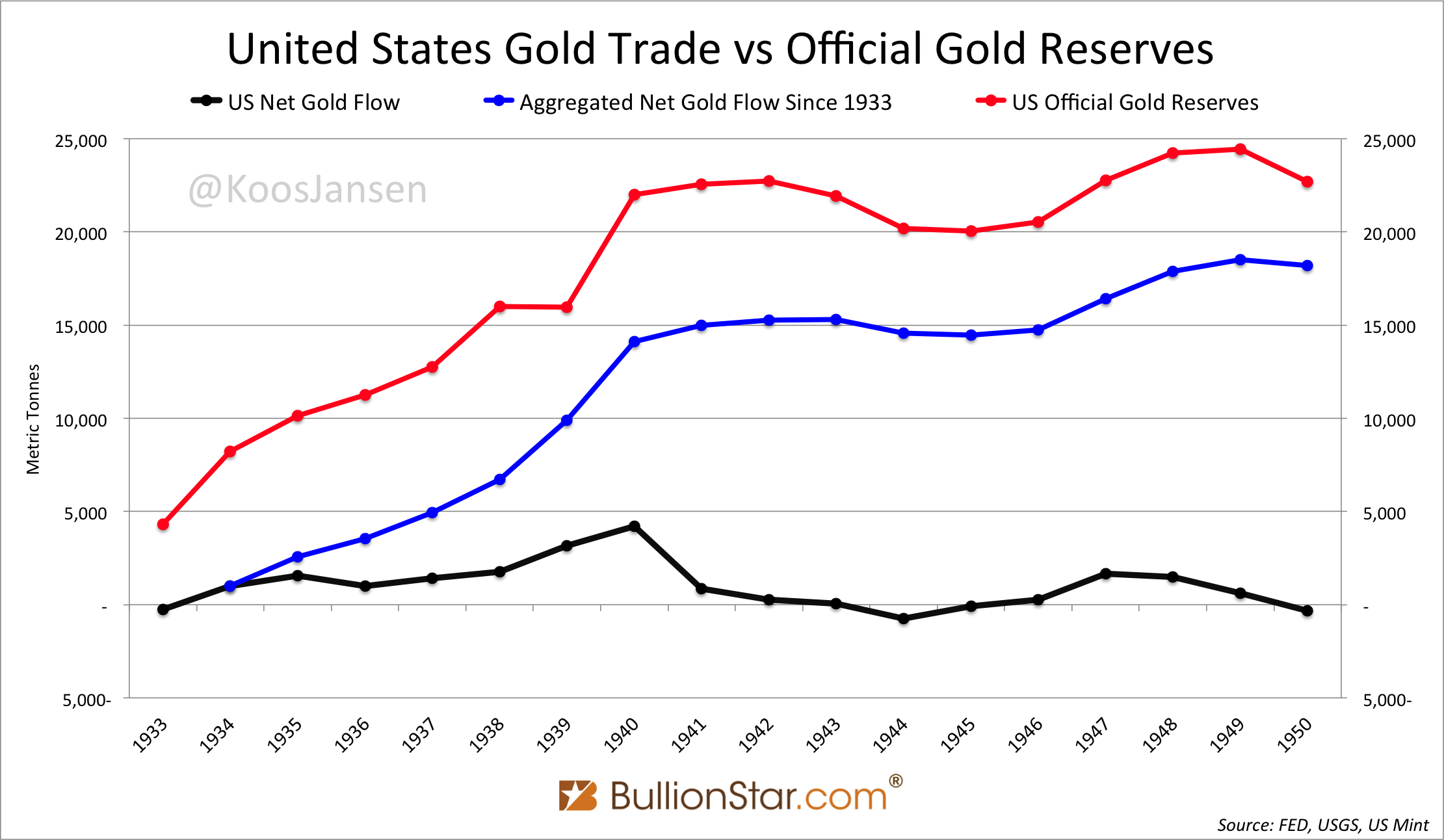 The correlation between the red and the blue line means most of the US official gold reserves were added through imports. All gold imported went straight to the Treasury, as well as US mining output, which had more than doubled from 71 tonnes in 1933 to 151 tonnes in 1940. Mining exploded after 1933 as one troy ounce’s purchasing power was increased by 70 %. 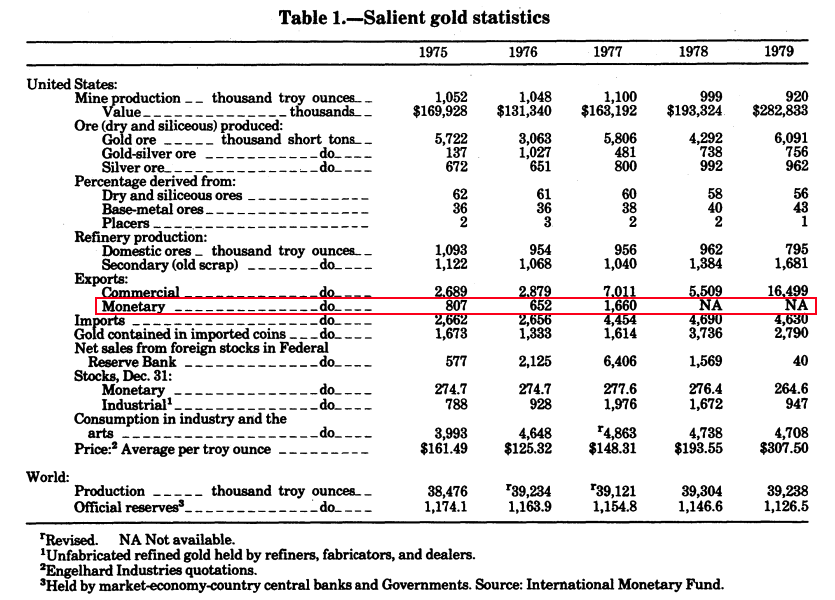 As we can see the US was still exporting gold from its official reserves in 1977. I wonder why they stopped publishing monetary export data in 1978? From 1978 to 2013 the US has net exported 4,660 tonnes in non-monetary gold.

What I’m mostly after is what kind of bullion was exactly imported since 1934, coin bars or 995 bars, as we know now the gold in Fort Knox hasn’t been supplied by US coins in circulation before 1933, though the Fort Knox bar list shows most of the gold is 900 fine.

Where US official gold reserves exactly came from and what types of bars were supplied will be examined in part two!