Belgium sold 1,098 tonnes of its official gold reserves since 1978.

For our global investigation how much physical gold central banks have stored at what location and how much is leased out, I decided to submit the local equivalent of a Freedom Of Information Act (FOIA) request at the central bank of Belgium, de Nationale Bank van België (NBB), to obtain information about the amount of Belgian official gold reserves, the exact location of all gold bars, the type of gold accounts NBB holds at the Bank Of England (BOE) and how much is leased out and to whom. The outcome of this research was not what I had expected.

History Of The Official Gold Reserves Of Belgium

Some of the questions I directed at the NBB I used a stepping stone, as this information is publicly available in part. At the end of August 2015 NBB was holding 227.4 tonnes of gold, down 0.04 tonnes from 227.44 tonnes in July, according to data from the Bundesbank that publishes the gold holdings of 19 European central banks and the ECB in compliance with the IMF’s most recent version of the Balance of Payments and International Investment Position Manual (BPM6). The Bundesbank (BuBa) publishes the fine troy ounces of the official gold reserves in ‘Gold bullion’ and ‘Unallocated gold accounts’. If we add up both categories the outcome for all countries equals the reserves disclosed by the World Gold Council. 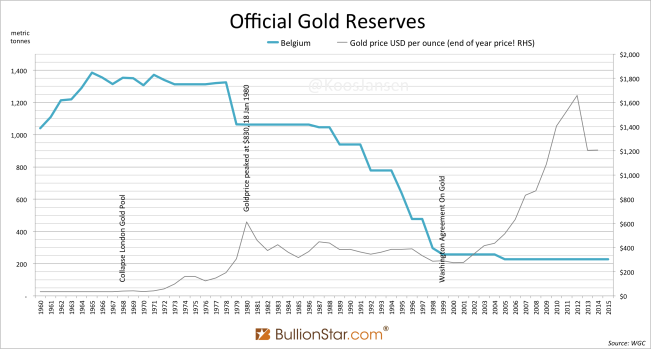 Belgium was one of the eight participating countries in the London Gold Pool, together with the US, Germany, the UK, France, Italy, the Netherlands and Switzerland, that operated from 1961 until 1968 to stabilize the gold price at $35 an ounce by selling/buying gold in the London bullion market. Eventually the pool collapsed in 1968 because the US had printed too many dollars and France was not willing to sell any more gold to defend the gold price at $35. Remarkably, Belgian official gold reserves dropped significantly after the Pool collapsed, from 1978 until 1999. Likely, NBB was partially seeking to diversify its reserves into higher yielding assets or to lower the national debt, in addition it could have sold metal to lower the price or to “equalize its holdings relative to other gold holding nations”. Let me explain that last quote. Belgium was not the only European country that has sold vast amounts of gold in the nineties and before. When the Dutch Minister Of Finance in 2011, J.C. De Jager, was questioned about the gold sales of the central bank of the Netherlands in the nineties he answered:

So, the independent central bank of the Netherlands (DNB) had decided to sell gold because “from an international perspective it owned a lot of gold proportionally”. Clearly DNB was considering the amount of gold reserves of other central banks and weighed these against its own holdings before it decided to make a downward adjustment. Was this a unilateral decision for the sake of balanced gold reserves among central banks? I don’t think so.

In 1999 the Central Bank Gold Agreement (CBGA, also called the Washington Agreement On Gold) was signed by 14 European central banks, inter alia NBB, to jointly manage gold sales. This demonstrates central banks are not unfamiliar with managing their gold reserves in concert. First there was the London Gold Pool, then the Dutch sold gold to equalize their holdings relative to other central banks and then CBGA was signed.

Maybe NBB has sold part of its reserves prior to 1999 for the same reason De Jager mentioned; to equalize the chips. Allegedly this was the idea behind the euro. GoldCore wrote on 28 May 2013:

Belgium announced another sale of 203 tons of gold on March 27, 1996, stating that the sale had reduced the share of gold in total reserves to a level which would facilitate the participation of the National Bank of Belgium [NBB] in the process of European unification and which, corresponded to the proportion of gold in the total reserves of the Member States of the European Union.

More information about the Belgian gold reserves that was perviously known: most of it is stored at the BOE in London, the heart of the global gold lease market, hence my question at the NBB regarding the type of gold accounts it has with the BOE. From searching the internet and the website of NBB I could read Belgium had leased out 84 tonnes of its gold reserves in 2011, this decreased to 37 tonnes in 2012 (lent to 5 commercial banks) and 25 tonnes in 2013 (lent to 5 commercial banks). In response to my FOIA, the NBB notified me it is exempt from any such requests regarding its gold reserves – click here to read the reply from NBB in Dutch. This response was similar to that of a FOIA request I submitted to DNB in 2013 in order to obtain the list of bar numbers of the Dutch official gold reserves, which bounced as well.

NBB wrote me that aside from the rules they aim to be as transparent as possible by disclosing all information to the public about their official gold reserves that is not sensitive. NBB wrote me (my translation):

– The storage and safekeeping abroad happens according to standards and practices that are common among central banks.

– Against a guarantee covering 101.5 % of the credit NBB had an average of 15.7 tons of gold leased out in 2014. The counterparties are commercial banks with high creditworthiness. The NBB will not enter into any new gold leases and leave the existing book until it’s fully unwound in February 2018.

Because I sensed to be in touch with an employee from NBB that knew all about the Belgian gold, I asked why they had sold 1,098 tonnes of gold since 1978? Was it to diversify reserve assets, reduce the national debt or to be accepted to the Eurosystem. NBB replied (my translation):

The sales in question took place in the context of a more balanced composition of the reserves of NBB with regard to its integration into the European System of Central Banks, although it was not the result of a legal obligation.

Next I asked what the reason was to sell the gold if there was no legal obligation, was there a verbal agreement among central banks? NBB replied (my translation):

The aspects of the management of the foreign reserves that have not been communicated by the NBB through its annual reports and press releases constitute confidential information that can not be disclosed on the grounds of professional secrecy laid down in Article 35 of the law of 22 February 1998 establishing the Statute of the NBB.

So indeed there was a secret agreement among central banks to sell gold and balance reserves, but NBB is not required to disclose this information based on “Article 35 of the law of 22 February 1998 establishing the Statute of the NBB” – a law that was passed right before CBGA was signed and the euro was launched. Actually, the details of the agreement are secondary because NBB’s statement “the sales in question took place in the context of a more balanced composition of the reserves of NBB with regard to its integration into the European System of Central Banks”, is very clear to me. Especially when we add De Jager’s statement from 2011, “DNB determined that from an international perspective it owned a lot of gold proportionally. It decided to equalize its gold holdings relative to other important gold holding nations.”

I can’t be a coincidence both central banks sold gold prior to 1999 for “more balanced reserves" while the sales would not have been executed in conjunction of each other. My conclusion is that the gold sales of European central banks prior to CBGA have been jointly managed in secret.

Here you can read the full email exchange between me and NBB in Dutch.