Only 11 % of Dutch official gold reserves, which is 613 tons in total, is stored in Amsterdam. The rest is held abroad; 20 % in Ottawa, 20 % in London and 49 % in New York. Because of my believe gold will re-enter the monetary system within a few years I’m most concerned about the safety of the official gold reserves of the Netherlands held abroad. Just like the Germans are, expressed by the repatriation of some of their gold. Germany decided to repatriate 300 tons from New York and 374 tons from Paris in a seven year period, so that at least half of their gold reserves are stored at home. The following slide is from a gold report written by the German central bank, the Bundesbank: 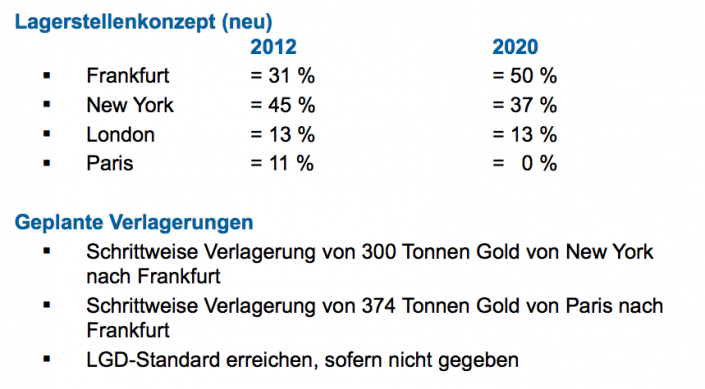 From second hand I had heard the Dutch Central Bank (DNB) and the Federal reserve (the custodian of the Dutch gold in New York) did have some correspondence in recent years about monetary gold, but the Dutch did not decide to repatriate any gold because the subject was rather sensitive, according to my source. Through which we can conclude it’s vey likely the FED doesn’t hold all the foreign gold they claim, how else can this subject be sensitive. If a friend would store a book in my home for 30 years but would like to have it back at a certain moment I would be happy to return it. Only if I would have lost or sold the book his request would be rather sensitive.

In The Netherlands we have a law called WOB (Wet Openbaarheid van Bestuur). It means the law for openness of governess, this is the Dutch version of FOIA.

On December 12, 2013 I sent the Dutch Central Bank (DNB) a WOB request to inspect all correspondence, from the past 45 years, regarding monetary gold between DNB and all other central banks, mainly the Federal Reserve.

The next day I got a call from DNB in which they told me they received the request and it would be processed, confirmed by a letter four days later. 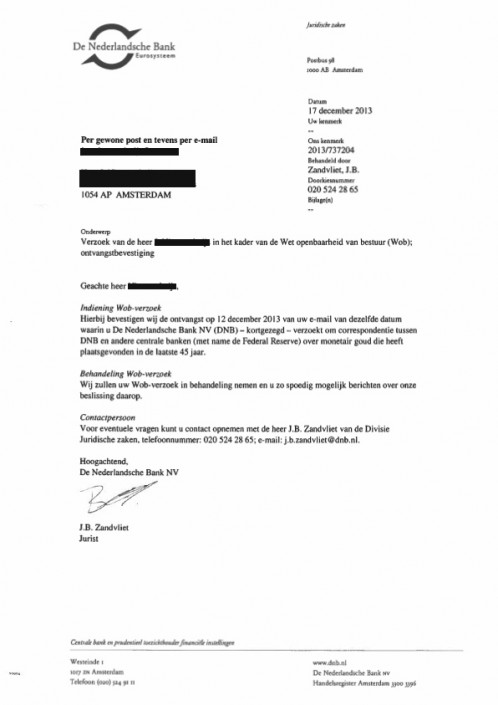 Wow, great service I thought. I was looking forward to reading the correspondence. 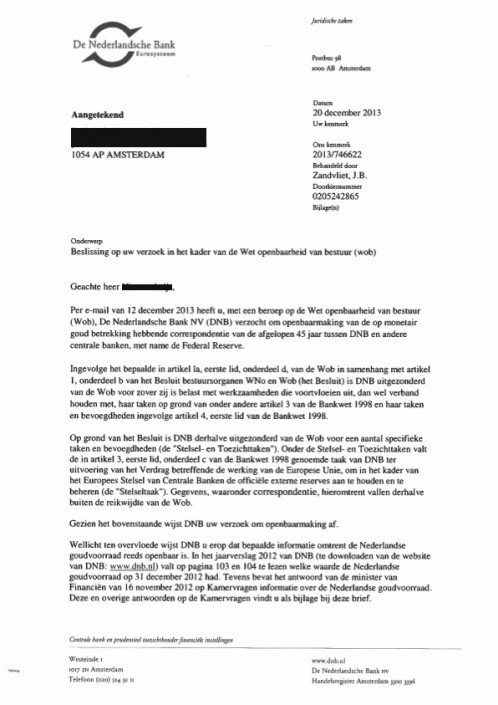 Translated in short: the WOB act applies for just about everything the government does, except its gold dealings. What a surprise..

Of course I will fight this till the end.  I would also like to encourage everybody around the world to ask his central bank about their gold allocation. Do not forget the official gold reserves of a (democratic) country are owned by its citizens, not by a few politicians. So why are we not allowed to examine our own gold?