From June 8 – 12 withdrawals from SGE certified vaults in China mainland and CME Kilobar vaults in Hong Kong accounted 76 for tonnes. 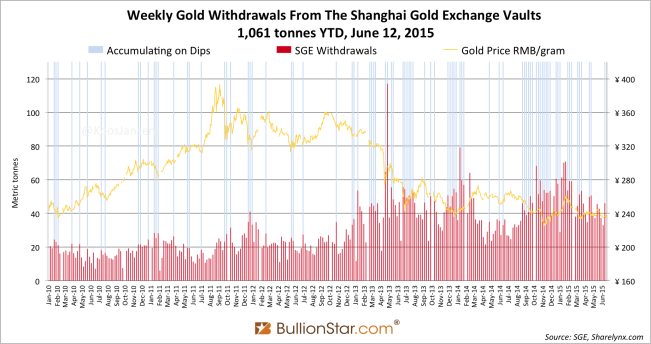 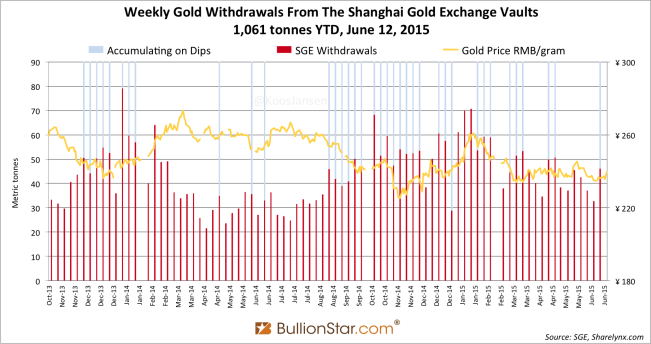 At this stage total SGE withdrawals, as disclosed by the weekly SGE reports, are difficult to analyze as we didn’t get any hints lately from the Chinese as to what is composition of the demand side of withdrawals, how much are SGEI withdrawals that are not imported into the mainland, and what is the composition of the supply side, how much gold is imported into the mainland and/or recycled to supply SGE withdrawals. Technically, all trades (volume) on the SGEI can be withdrawn and exported to, for example, India. This is not likely, but we don’t know. Attempts from my side to obtain the latest data regarding SGEI withdrawals have resulted in little intelligence. 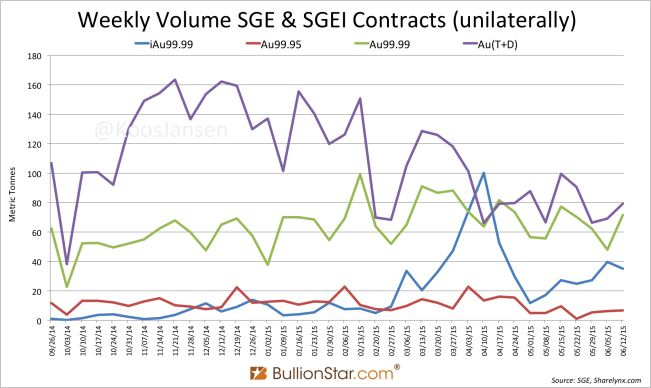 In March 2015 the Chicago Mercantile Exchange (CME) launched a gold kilobar futures contract, which can be physically delivered in Hong Kong. The contract can be traded over exchanges (CME Globex, CME ClearPort, CME Direct, New York open outcry) and in the Over The Counter (OTC) market.

The kilobar volume over exchanges is insignificant and I’m not aware if any delivery is made from these trades. However, if we look at the physical gold throughput of the Hong Kong vaults, we must conclude this contract is a popular trade in the OTC market. This has been confirmed to me by a CME representative. Note, withdrawals from the Hong Kong vaults transcend the volume disclosed by the Merc, so the physical settlements must happen in the  OTC market.

I would like to emphasize kilobar withdrawals do not have the same significance as SGE withdrawals. The mechanics of the gold market in Hong Kong are completely different from the market in the mainland. Hong Kong has been a trade hub for centuries; gold is imported and exported in vast amounts. Kilobar withdrawals do not reflect gold demand; it does illustrate how much is going through the Chinese Special Administrative Region (Hong Kong). 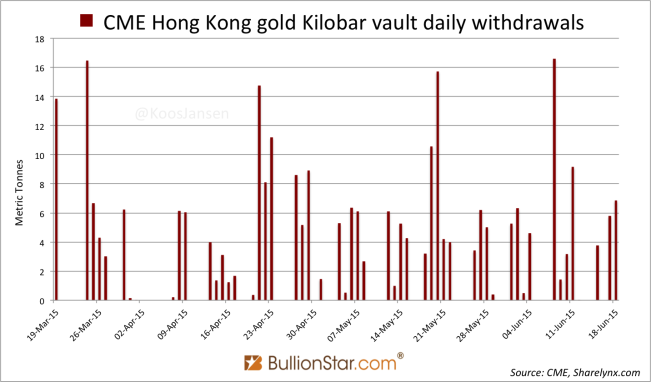 In week 23 kilobar withdrawals in Hong Kong accounted for 30 tonnes. On June 8 a record 16.61 tonnes in 9999 kilobar gold was withdrawn from the Brink’s vault in Hong Kong.