The amount of gold withdrawn from the vaults of the Shanghai Gold Exchange (SGE), which equals Chinese wholesale gold demand, accounted for 45 tonnes in the trading week that ended on 6 November. Year to date SGE withdrawals have reached an astonishing 2,210 tonnes, which is more than the full year record set in 2013 at 2,197 tonnes. With nearly two months of trading left in the Chinese gold market, SGE withdrawals are estimated to reach more than 2,600 tonnes. 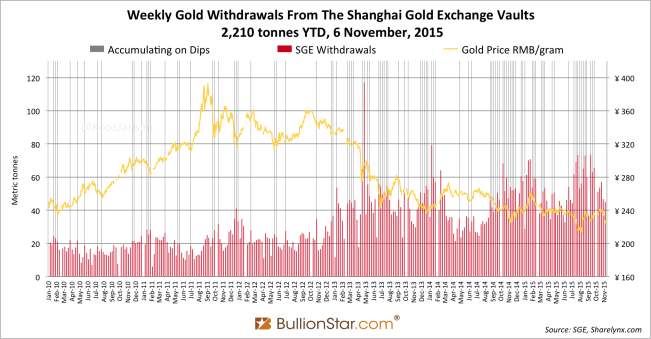 If Chinese gold import will be higher than in 2013 remains to be seen. Two years ago China imported 1,507 tonnes in standard gold bars. According to my estimates China is on track to import 1,400 tonnes in 2015. This year’s SGE withdrawals can have been supplied by more recycled gold than in 2013 that in part replaces gold import.

SGE withdrawals can only be supplied by domestically mined gold, imported gold or recycled gold (ie scrap). Because China is one of the few countries that doesn’t disclose its gold trade data we must estimate Chinese gold import from data provided by gold exporters such as the UK, Switzerland, Hong Kong and Australia. Their foreign trade statistics show China has net imported more than 1,032 tonnes of gold in the first three quarters of 2015. In addition, Chinese domestic mining output has been 357 tonnes, according to the China Gold Association, which is prohibited from being exported. Without counting scrap supply apparent physical gold supply in China was 1,389 tonnes in the first nine months of 2015, yet, the World Gold Council disclose Q1-Q3 Chinese gold demand at 736 tonnes. Again, for years in a row now, there is more than twice as much physical gold being supplied to China than what is presented as demand to the average gold investor by the authority on gold (the World Gold Council). 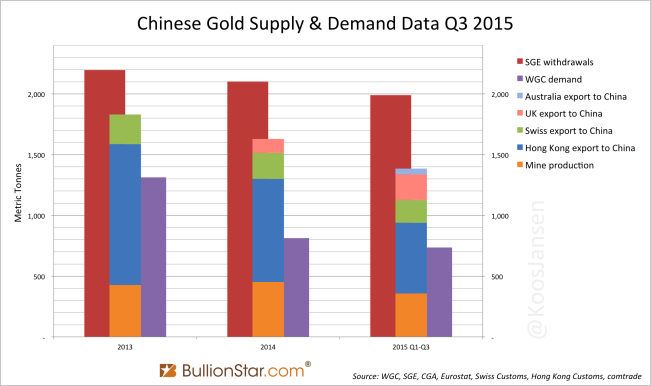 How can so much gold be supplied to China without someone buying it and thus being genuine demand? It cannot. Chinese gold demand as disclosed by the World Gold Council (WGC) is fallacious.

Does the mainstream media ever investigate this odd discrepancy? Of course not, according to them gold is just a pet rock. Nobody cares about 2,500 tonnes of gold that have vanished into a black hole somewhere in China. Whilst, coincidentally, China is the second largest economy in the world that has stated the US dollar should be replaced as the world reserve currency. At the same time the global economy is still struggling to recover from the biggest financial crisis in recent history by printing money, which seems to do nothing more than buy time. But Western media refuse to connect the dots.

Also note, none of the arguments listed above have been carefully described by the consultancy firms that presented them. A few sentences in a report from the World Gold Council were enough to convince the Financial Times to copy-paste the conclusion, although being factually incorrect. Never do the firms thoroughly describe the process of gold leasing or round tripping. Please, show me how gold leasing has inflated SGE withdrawals by 2,500 tonnes and I would be happy to further investigate the flows of gold through the SGE. The most recent sign from mainstream analysts with respect to this topic was communicated through a tweet. 140 characters achieved to set in motion a renewed wave of believe Chinese gold demand numbers make perfect sense.

Doesn’t this subject deserve a little more debate? By the way, isn’t there a contradiction in “numbers complex” and “huge gap between SGE withdrawals and demand data is simple”?

And there is more. Some analysts speculate the PBOC is the secretive buyer of the ‘surplus’ imported gold in China. I would not agree (click here, here and here for my posts on this subject) and I suppose the WGC agrees with me. From the WGC in 2014 [brackets added by me]:

China’s authorities have a range of options when purchasing gold. They may acquire some of the gold which flows into China [required to be sold through the SGE]…. but there are reasons why they may prefer to buy gold on international markets: gold sold on the SGE is priced in yuan and prospective buyers – for example, the PBoC with large multi-currency reserves – may rather use US dollars than purchasing domestically-priced gold. The international market would have a lot more liquidity too.

The WGC suggests the PBOC does not buy gold through the SGE, which implies official Chinese gold demand complements SGE withdrawals and thus the difference of 2,500 tonnes. But then the supply and demand balance from the WGC is still missing 2,500 tonnes. Or is it…?

After six year of silence China’s central bank, the PBOC, announced in July 2015 it had accumulated 604 tonnes in official gold reserves (that jumped from 1,054 to 1,658 tonnes). In the books from the PBOC the 604 tonnes were added to their reserves in the month of June. Subsequently, in July, August and September the PBOC increased its reserves by 50.5 tonnes in total.

The World Gold Council includes all official gold purchases in their Gold Demand Trends (GDT) reports. Below is the total supply and demand table from the WGC released in the GDT report released for Q3 2015. 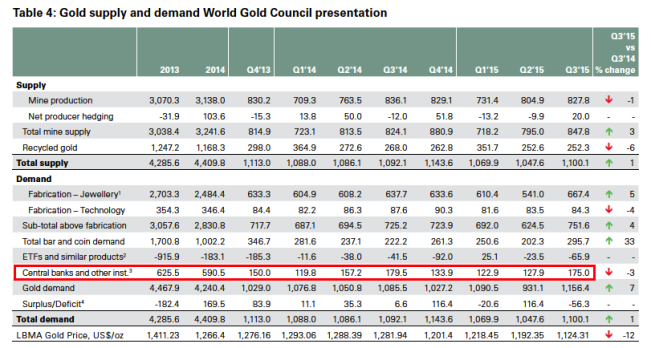 As we can see central bank purchases are included, though if we look at total official gold demand for Q2 2015 it states 127.9 tonnes (Q3 2015 is 175 tonnes). Apparently, the World Gold Council did not include the 604 tonnes increment from the PBOC in their total supply and demand balance – and likely will not in any forthcoming balance. But the PBOC must have bought it from somewhere right? 604 tonnes couldn’t have fallen from the sky, it must have been supplied by disinvestment, mining output or scraps. Shouldn’t this demand by the PBOC have been disclosed somewhere in a supply and demand overview? We were already missing 2,500 tonnes from the WGC numbers and now we have to add another 604 tonnes.

From the GDT Q3 report we can read:

The People’s Bank of China (PBoC) confirmed in July that its gold reserves had expanded by over 50% since its last announcement in 2009. At 1,658t, that put China at number six in the global rankings. Subsequently, the PBoC has begun regularly to report changes to its gold holdings and has confirmed an additional 50.1t of purchases between July and September.

Did you notice the WGC refrains from mentioning the PBOC bought 604 tonnes, but conveniently writes the PBOC had “its gold reserves … expanded by over 50 %”? This way another 604 tonnes are hidden from the World Gold Council’s total supply and demand balance, which in my opinion is nothing more than a vague mirage of true global gold supply and demand. 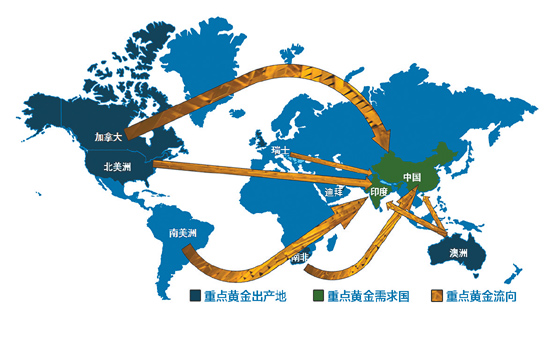