The central bank of Germany, the Bundesbank, has published the bar list of all German official gold reserves stored in Frankfurt am Main, London, Paris and New York. The list contains the bar numbers, melt or inventory numbers, the gross and fine weight as well as the fineness of the gold. German official gold reserves account for 3,384 tonnes and is the second largest after the US.

In 2012 the Bundesbank initiated its first repatriation schedule to repatriate 150 tonnes of gold from the US in three years, ending in 2015. Before one bar was brought home, this schedule was revised in the beginning of 2013 to repatriate 300 tonnes from the US and 374 tonnes from France by end-2020, to eventually have at least 50 % of German official gold reserves at home. So after January 2013 two repatriation schedules co-existed. They were not mutually exclusive – most Germany expected to see back was 150 tonnes from the US by 2015, and ultimately 674 tonnes by 2020 from both the US and France.

But at the end of 2013 only 37 tonnes of gold had reached German grounds of which 5 tonnes came from the US, and all of the 5 tonnes from the US were recast into new bars. Germany decided in February 2014 to cease repatriation schedule Plan A, and continue Plan B. Basically the Bundesbank (BuBA) was giving the Federal Reserve Bank Of New York (FRBNY) more time to ship the gold to Germany, as there were clearly some logistical problems.

Although the German repatriation schedule accelerated in 2014 and by year end it had brought home 85 tonnes from the US and 35 tonnes from France, this time 50 tonnes of the 85 tonnes Germany received from the US had been recast into new bars and the mystery as to why it was taking so long to transport the German gold was not clarified.

The mystery grew when the FRBNY disclosed on 31 January 2015 it had been drained from 176.81 tonnes of physical gold out of the foreign deposit accounts in 2014. A drop from 6,195.60 tonnes to 6,018.79 tonnes over 12 months. Whilst, DNB and BuBa had claimed to have received 207.5 tonnes (122.5 tonnes by DNB and 85 tonnes by BuBa), which is 30.69 tonnes more than what the FRBNY said to have shipped out. The only explanations could be, (i) a fourth central bank had deposited 30.69 tonnes at the FRBNY in 2014, (ii) the FRBNY had swapped gold with a foreign central bank that was supplied to DNB or BuBa, or (iii) DNB or BuBa did not receive the amount of gold they stated.

Although the German bar list is anything but complete (it misses the refiner brands, refinery bar numbers and year of manufacturing) it seems the Germans are increasing the pressure on the FRBNY by releasing the list of bars they have stored at the four locations (Frankfurt, Paris, London, New York). Leaving the FRBNY no other option than returning the exact bars that belong to Germany.

Year to date the FRBNY earmarked gold has dropped by 80 tonnes. This has likely all gone to Frankfurt as it’s not known any other countries are currently repatriating from New York. 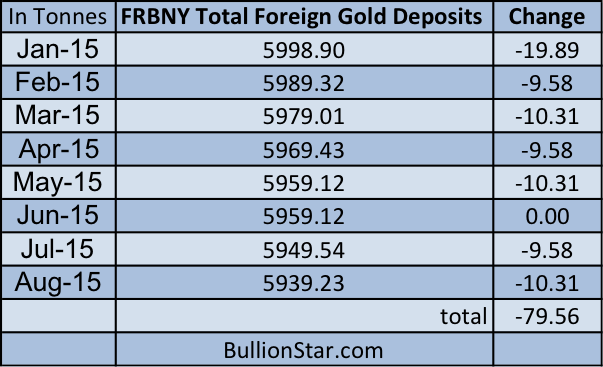