One of the initiators of the German public campaign “Repatriate our Gold” is Peter Boehringer of “German Precious Metal Society” (est 2006). After lengthy efforts together with partner the “European Taxpayers Association”, the team finally, in January 2013, brought about Bundesbank´s decision to repatriate 300 tons of gold from the US and 374 tons from France  by end-2020. Because asking your gold back from the US being quite sensitive, the repatriation would be spread over an eight year period. This was the original allocation schedule for the German official gold holdings, 3390.6 tons, set up in January 2013:

What I just found out, and what presumably few people in the English speaking world knew, was that the Bundesbank had made an earlier repatriation request in the fall of 2012, to ship home 150 tons  from the US in three years (ending in 2015).  So after January 2013 two repatriation schedules co-existed. They were not mutually exclusive – so most Germany expected to see back was 150 tons from the US by 2015 – and ultimately 674 tons by end-2020 from both the US and France. 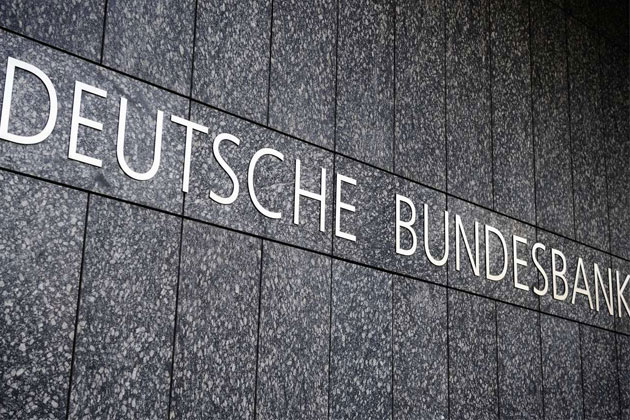 This was the plan.. But in 2013 only 37 (remelted) tons of gold reached German grounds of which 5 tons from the US. Needless to say, this lifted a few eyebrows. The Bundesbank has now withdrawn the original schedule to repatriate 150 tons from the US before 2015, but continues plan B, to repatriate 674 tons from NY and Paris by end-2020.

The following is the translation of an article written by Peter Boehringer published on Goldseitenblog (click here to read the original post). It’s a response to a full three page title story that appeared in a German newspaper (Handelsblatt Feb 6, 2014, print version only, not online) on the latest developments regarding the gold repatriation schedule discussed in German politics.

Due to new developments, the initiators of the Repatriate Our Gold action today publish a small update. The print version of the German Handelsblatt today (02.06.2014) published a substantial three page feature exclusively on the German Gold Reserves, widely known to be stored by the German Bundesbank, the Fed, the Banque de France, and the Bank of England. Under the ambiguous title “Silence is Golden," no less than four Handelsblatt editors along with Norbert Häring, a senior and competent voice in matters of Gold vs Money, delivered a piece that is in parts pretty critical against the Bundesbank and addresses questions that are familiar to the readers of this blog. Some of these are the same questions for which we have been labeled as paranoid conspiracy theorists by almost every mainstream publication from the beginning of our initiative in 2011-2012 right up to a few days ago. Questions which, from the perspective of the Bundesbank (BuBa), are apparently too delicate to be answered. But today, the usual rhetorical billy club of “conspiracy theory” is absent from the Handelsblatt piece. Apparently, the German mainstream publication is finally coming to the realization that it would make a ridiculous fool of itself, were it to continue to stick with its conspiracy theory vilification strategy in the face of such overwhelmingly critical BuBa-Gold inquiries from its very own readership, as well as from hundreds of reports from international observers and media, most recently even from the Financial Times.  By now, articles on the German gold repatriation demand of Repatriate Our Gold has even appeared in dozens of Chinese, Russian, American, Indian and African publications.  The German Gold, opaquely held in custody by the Fed & other central and currently worth more than 100 billion Euros, is not only the core component of BuBa’s balance sheet and the property of the German people, but it is also a geopolitical issue and an important founding stone of the suspected world fractional gold banking system.

The Handelsblatt writes today: “The policy makers are putting pressure on the Bundesbank."

=> To which we reply:  German “Policy makes" have done almost nothing in the past 50 years.  After David Marsh in 1992 and Bruno Bandulet in 2002, and Martin Siegel and Dimitri Speck, Martin Hohmann in 2002 was the first POLITICIAN who at least posed questions – albeit without any results. The same holds for lawyer and member of parliament (MP) Peter Gauweiler. And as a staunch trans-atlanticist, his MP-colleague Mißfelder who currently serves as the German “federal commissioner for the German-American relationship" would never have jumped on the Fed-Gold topic had there not been the mounting public pressure and a need to relieve some of that pressure. In any case, “Policy makers" have not helped us a lot. But at least, a few weeks ago, Mr Mißfelder has finally and rightfully called for the retrieval of ALL foreign holdings of the German Bundesbank (i.e., 2300 tons instead of the planned 700 tons; totally new “dimensions” for BuBa´s imagination…)!

=> Don’t let the BuBa hear that Mr. Häring, otherwise you will quickly be labeled a conspiracy theorist.  Nothing is “enigmatic” in the cellars and books of the BuBa and the Fed, absolutely nothing! We are talking (quoting BuBa) about “partner-banks whose integrity is not be questioned," much like the purity of gold itself.  Let that be heard!

Handelsblatt: “The Bundesbank no longer feels bound to the [concrete repatriation commitment time table] as they now admit for the first time [towards the HB]."

=> Interesting – because this is in fact the first time that the BuBa is partially revoking their promise, made to the German Bundestag (parliament) in 2012, for a full inventory inspection and a repatriation of “150 tons from New York by 2015". After the 5 tons retrieved from NY in 2013 and the 30-50 tons announced for 2014, the BuBa seems to already KNOW today that not even 100 tons (= 6.7 % of the portfolio) will be forthcoming from NY in 2015! Honi soit qui mal y pense.  (“Shame on him who thinks evil of it!")

=> Indeed, in January 2013 BuBa has come up with a new (less specific) repatriation concept that would retrieve 300 tons from NY & Paris by the end of 2020. However, the concrete repatriation time table from the Bundestag hearings of 2012 had thus far not been withdrawn – which is why the above quoted admission of the unfeasibility of repatriation by 2015 is quite remarkable!  And which naturally feeds our mistrust of the Fed’s ability and willingness to deliver the gold.

Handelsblatt: “Due to ‘logistical challenges,’ the BuBa no longer feels bound to its promise to the Bundestag."

=> We have already dealt exhaustively with this issue in previous articles.  If even the ridiculously low amounts of 80-100 tons of gold per year are too challenging for the Fed and BuBa to transport (and that despite Weidmann’s request for help from the BIS), then one must wonder how back in 2000-2002 nearly 1000 tons of gold were delivered from the Bank of England to Frankfurt without all this fuss and public whining.  The BuBa itself has been claiming this successful transportation performance of the early 2000s since 2012.

=> And quite apart from that, the BuBa is of course free to simply ask the Fed for a swap of their bullion with a European gold holder or international dealer, upon which the bars would simply be retrieved from London, Zurich, or even Frankfurt. No physical transatlantic transport required – and everything guaranteed to be LGD compliant!  The disadvantage would be that we paranoid gold historians would never get to see in Frankfurt the old German bullion from the 1950s and 1960s that are held at the Fed (since they would be swapped with European gold). But that would be a small disadvantage given that the BuBa has already refused publication of any photos or number lists of the already allegedly repatriated and supposedly already re-melted original Fed bullion, due to “security reasons." In fact, from the perspective of the BuBa, the swap solution would have the great advantage that we would finally have to put to rest the silly and delicate questions about the whereabouts of our original German bullion bars.  But no – even such logistically and legally simple options, by which 2300 tons of overseas gold could be “home by Christmas" are not good enough for BuBa. Honi soit qui mal y pense. (“Shame on him who thinks evil of it…")

Handelsblatt: “Peter Gauweiler will no longer accept these delay tactics.  He calls for the ‘immediate on-site inspections of the gold stocks and their immediate delivery to Germany’."

=> Dear Mr. Gauweiler, we happily extend our invitation to you once again to sign the Repatriate Our Gold initiative. Your clearly formulated demands are the same as ours.  Since 2011.  Let us finally reinforce our demands with the will to actually implement them!

Handelsblatt: “In 2012, the auditors of the Bundesbank could visually inspect the German bullion."

=> It’s Groundhog’s day again.  This statement is not new.  And it remains utterly blank and vague. Furthermore, the BuBa refuses to say anything about who these ominous auditors were (names), when and what exactly they audited, what “visually inspect" exactly means, what inspection reports have been produced and who signed them – in other words, why all this information is being held “confidential"?

=> But wait – we learn some more:  BuBa board member Thiele “personally visually inspected" the German gold stocks in June 2012 in NY.  Well, Mr. Thiele, did you arrive at any counts and inspection results?  And apparently “beyond that" you have also been “in the vaults in London and Paris."  Did you indeed meet the Queen there during a walk in the depths of the BoE?  Everything was fairy-tale-fabulous there, was it not? And your spokesman also tells us more: “Mr. Thiele could see everything that he wanted to see."  There is but one question that arises:  what did he WANT to see?  Ninety years ago your predecessor Hjalmar Schacht explicitly wanted to see NOTHING, although at the time the former Fed chairman B. Strong simply could not find any German gold at the Fed (for “fans” of the German Reich’s gold: these were NOT the 3400 BuBa-tonnes of today!).  At that time Schacht had said succinctly: “It doesn’t matter Mr. Strong – I know you are good for it (the replacement gold)."  Hmm – we wonder whether Janet Yellen is also “good for it" in the year 2014?

Handelsblatt: “In addition, an external expert has observed the re-melting of the gold bars."

=> Oh yeah, baby.  That sounds very good, Mr. BuBa Speaker (anonymous).  If you would now kindly provide and publish a NAME of this “expert", his exact procedure for the “counting observation", his signed report and his expertise – after your recent refusal to provide this information to the Handelsblatt upon their request.  Honi soit qui mal y pense.  (“Shame on those who..")

Let us close this small update today not with our own conclusion, but with these “no-longer-conspiracy-theoretical” findings from the mouth of MP Gauweiler:

“I wonder why the Bundesbank cannot repatriate the gold and then allow it to rest in an appropriate form [as reported by GS Blog from 25.12.2013 ].  My suspicion: Apparently the bars are no longer untouched and available.  This [leads to] the presumption that the gold bars, while in storage, have been used in a manner that lacked transparency."

=> Conclusion of the Handelsblatt: “Transparency as promised by Bundesbank looks different."  To be continued.

******
An old piece of advice – relevant both for individuals and for our Federal Bank board managing our gold.  The convenience of naive ignorance will soon cease to work:

“There are two ways to sleep well at night: be ignorant or be prepared."