Written by Peter Boehringer, initiator of the German campaign “Repatriate our Gold”.

Frequent followers of the German public campaign “Repatriate our Gold“ already know how intensively we have been struggling since 2011 (and longer) with Deutsche Bundesbank to finally – after more than 50 years of external storage of Germany’s gold – get credible transparency regarding this matter. Some progress was brought about recently (2012 disclosure of the whereabouts of Germany´s gold by BuBa; 2013 partial repatriation plan announced by BuBa; 2013 and ongoing through 2015 alleged physical repatriation of approximately 200 tons to date – equaling approximately 10% of Germany’s gold abroad). But real proof and transparency is still lacking from Bundesbank’s side!

One of the oldest demands from our campaign has been (and still is!) the publication of BuBa’s gold bar number lists from all four storage locations. Lists that should have been static (i.e. unchanged) since 1968 when Germany’s gold accumulation (was) ended; a full three years before the official end of the underlying Bretton Woods system. Yesterday, October 7, 2015; a full 47 years later and after five years of our heavy lobbying against BuBa’s ridiculous “security concerns” regarding the publication of the lists, the Deutsche Bundesbank officially and finally did publish a so-called “gold bar list”. The “list-to-end-all-conspiracy-theories” was celebrated both in a BuBa press release “Bundesbank publishes gold bar list” as well as in the (naïve) mainstream media. Confer e.g. Bloomberg “Bundesbank to Doubters: Here Is Our Gold. Every. Single. Bit of It.”

This article is intended to dismiss the impression which writers from both BuBa and its “external media department” at Bloomberg are clearly and provocatively trying to give: “Bundesbank to Doubters: Here Is Our Gold. Every. Single. Bit of It. Germany’s central bank has listed all of its gold.”

For the umpteenth time in 47 years, BuBa yesterday pretended to give transparency regarding Germany’s gold – but again failed miserably. I hereby challenge both BuBa’s Mr Weidmann and Mr Thiele and Bloomberg’s Mr Lorcan Roche Kelly to either withdraw their apodictic and loud but still completely unproven propaganda statement “Here is our gold – finally do believe it you stupid gold bug nutcases!!” – or to prove their so far unfounded and factually wrong statement!

1. No bar number list was made available by Bundesbank

Firstly, I am asking journalists and interested readers to open the 2,300 page long “custodian gold holdings – bar list” document : Everybody can see at first glance that the very first column of the “gold bar” list starting on page 7 is headlined “INVENTORY number” rather than “Producer’s Bar number”. An “INVENTORY number” however is something COMPLETELY different than the “Producer’s bar number”! It is a number artificially created on paper or a plastic sticker by the respective central bank which has nothing to do / no connection with the unique producers’ bar number pressed on the bars physically by the refineries when a bar is cast! The difference is absolutely CRUCIAL in that the very point of having a REAL gold bar number list is to enable a critical global public of gold experts and independent auditors as well as us-the-people and owners of the gold to check every individual bar not only regarding its physical existence but also to detect double countings on OTHER balance sheets (from central banks, Gold-ETFs, etc.)! The artificial and highly unusual “INVENTORY bar number” method Bundesbank has chosen to now publish “a gold bar list” completely fails in that respect. This list is worthless as a basis for sound, physical and worldwide auditing and counterchecking of all available global bar lists in order to detect and avoid double countings. We hereby claim that this approach by BuBa and its “sub-custodians” (Banque de France, Bank of England and Federal Reserve) was a DELIBERATE smokescreen chosen to confuse the worldwide public without providing transparency! This approach cannot be excused in any way by Bundesbank’s very “honest” fine print for the list: “The Bundesbank, the Bank of England and the Banque de France use internally assigned inventory numbers, whereby the Bank of England and the Banque de France only allow part of this internal number to be published. The gold bar list therefore only shows the last three digits for its gold bars stored at the Bank of England and the Banque de France.” This is NO industry-standard bar number list – individual bars could only be unambiguously identified if Bundesbank had provided the producer’s bar numbers as well as the name of the producing refinery as well as the year the bars have been cast! “Repatriate our gold” hereby officially demands this additional information which should be very easy for Bundesbank to publish!

Secondly, we challenge the Bundesbank to explain why with almost 100% certainty the REAL bar number list as detailed under 1. would NOT exclusively consist of bars produced in the 1950s and 1960s – ending exactly in 1967 or 1968 latest. Since 1968, Germany’s gold hoard should have been completely untouched with one or two possible exceptions due to lendings on a very small scale according to BuBa’s own statements in the past. We-the-owners of the gold demand to know whether, why, and how many of Germany’s bars (if actually existent and uncompromised) are younger than 1968 in BuBa’s vaults or the vaults of our sub-custodians. And how it is possible that (according to the list released yesterday) almost all bars are of 995 or higher fineness – even though pre-1967 this fineness had been rather uncommon especially in the US. And why – since obviously LBMA-standards are now met by practically all bars in the new list – Bundesbank still chose to melt down bars allegedly repatriated from the US in 2013-2014 (thereby destroying old bar numbers) without any photo / video proof of this process?

3. Audit the Fed – and the BuBa and the Banque de France and the Bank of England

Once all of these very valid and justified questions are not only answered verbally but backed up by clear evidence (i.e. a REAL bar number list!) – the work will only have to begin: The Federal reserve has not published any information regarding a real audit in its vaults (US-gold or custodial gold) since 1953 – one might even say since the 1930s! Similar story at the BoE and BdF vaults and even in Frankfurt! “Holt unser Gold heim” / “Repatriate our Gold” continues to demand physical and external audits performed by sworn-in auditors independent from the central banks – with all detailed results publicised. In addition, we demand the acceleration of Bundesbank’s “repatriation scheme” announced in 2013 – which is way too intransparent, too slow and not ambitious enough (only 50% of Germany´s gold in Frankfurt by end-2020)!

In summary – we have to strongly dismiss Bloomberg’s completely unfounded conclusion: “Here Is The Gold. Every. Single. Bit of It. Germany’s central bank has listed all of its gold”. We call on both Bundesbank and on an independent, investigative international media to have a second and third look into the matter – and then to definitely come to a much more critical conclusion! Bloomberg’s conclusion is either ridiculously ill-founded and / or has been pre-written by the Bundesbank itself in a vain effort to finally and for good end all gold debates: “[Obviously], Bundesbank has become tired of people asking and decided to give the doubters enough [gold] data to keep them busy for a very, very long time.” Wrong and wishful thinking: The case of the whereabouts and the physical and (un-?)compromised status of Germany’s gold has NOT been closed yesterday by Deutsche Bundesbank! The work has barely begun – but without REAL bar number lists and REAL audits, it CANNOT even BEGIN in earnest. The struggle will have to continue – Bundesbank leaves no other choice to the owners of the gold. And the issue will not go away from the desks of Mr Weidmann and Mr Thiele. “We. Demand. A. Real. Bar. List. Not. Yet. Another. Paper. Trail. Without. Any. Evidence.” 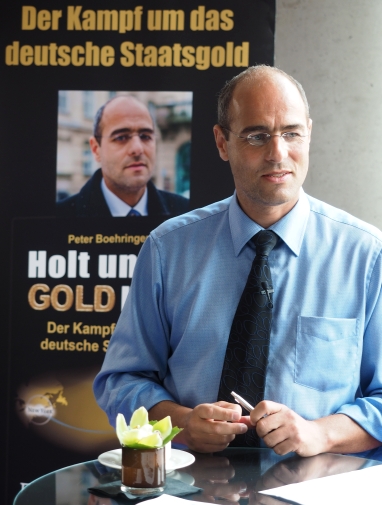 Peter Boehringer is founder and president of “German Precious Metal Society” – an NGO established in 2006. He is also the most widely read writer on gold matters in German language countries, a frequent speaker on precious metal conferences and the initiator of the German and international campaign “Repatriate our Gold” which has prompted similar public campaigns for gold repatriation in more than a dozen countries. He is the author of the Book “Holt unser Gold heim” / “Repatriate our Gold”, published in 2015 in German in renowned “Finanzbuchverlag” editing house. https://www.facebook.com/Holt.unser.Gold.heim.PeterBoehringer