From January to December 2014 the Federal Reserve Bank Of New York (FRBNY) has been drained from 176.81 tonnes of physical gold out of the foreign deposit accounts. A drop from 6,195.60 tonnes to 6,018.79 tonnes over 12 months, FRBNY data published on Friday showed. The FRBNY doesn’t disclose how much is withdrawn by which central bank. 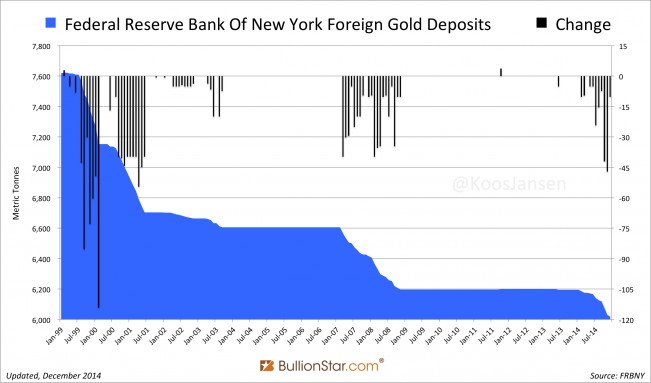 These numbers do not match the claims made in Europe about gold repatriated from the US. This is bad news.

On November 21, 2014, the Dutch central bank, De Nederlandsche Bank (DNB), surprised the world by stating they had in utmost secret repatriated 122.5 tonnes from their gold deposit at the FRBNY. Although not specifically disclosed by DNB, all the gold must have been repatriated in 2014.

January 19, 2015, the German central bank, the Bundesbank, announced they had successfully repatriated 85 tonnes from New York and 35 tonnes from Paris in 2014. Of the 85 tonnes from the FRBNY 50 tonnes were recast according to the London Good Delivery (LGD) standard.

Some simple math: 122.5 tonnes plus 85 tonnes is 207.5 tonnes; this is the amount DNB and the Bundesbank claim to have withdrawn from the vaults in New York. The FRBNY states it only delivered 176.81 tonnes to their European allies across the pond. The gap accounts for 30.69 tonnes; this is “the problem” the three central banks are now facing.

“The problem” adds to a range of events that happened since 2011 and fueled speculation about whether the FRBNY can fulfill all their gold obligations to foreign depositors.

The list goes on and on. Perhaps the latest data released by the FRBNY is a typo, perhaps 30.69 tonnes was shipped to Germany early January 2015 and the Bundesbank counted this as repatriated in 2014 to make the tonnage shipped home in 2014 look less worrisome compared to the tonnage DNB got back, perhaps there is a explanation for the gap in tonnage reported by both sides of the Atlantic. I surely hope so. In any case it’s very alarming the three central banks didn’t even take the simple effort to make it seem all the numbers add up.

I will call and email all three central banks on Monday to confront them with the current situation, although I doubt either will change any of their numbers. In my opinion there can only be three causes for “the problem”: