The central bank of Germany, BuBa, has just released the numbers of their gold repatriation activities in 2014. More than expected the Germans shipped home 85 tonnes of gold from the Federal Reserve Bank of New York (FRBNY), previously BuBa hinted at withdrawing 30 to 50 tonnes from New York in 2014, from France 35 tonnes were returned. Below we can see an overview from BuBa of all repatriation activities since 2013:

There has been a lot of fuzz about the German gold repatriation schedule, which in 2013 was set to return 674 tonnes before 2020, when only 37 tonnes reached German soil in the first year. Many eyebrows were lifted in the gold space; is there any gold left in New York? Why is it taking seven years to repatriate a few hundred tonnes? Especially the fact only 5 tonnes were returned from the FRBNY in 2013 was suspicious. In my opinion it’s very strange only 5 tonnes returned in the first year, but as far as my intelligence goes this wasn’t unilaterally obstructed by the Fed.

More speculation went round when in November The Netherlands announced they had secretly repatriated 122.5 tonnes from New York. The FRBNY publishes on a monthly basis how much gold they hold in total as foreign deposits. When we learned The Netherlands had repatriated 122.5 tonnes somewhere in between January and November 2014, some suspected most of what was drained from the FRBNY, as published by year to date FRBNY data, was brought to The Netherlands and Germany wouldn’t meet its schedule for 2014. But because the FRBNY data lags a few months analysts could only speculate as they didn’t have the total numbers of 2014.

At this moment we have FRBNY data up to November. 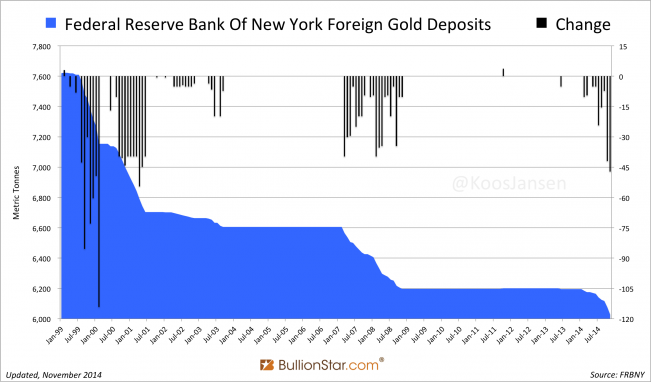 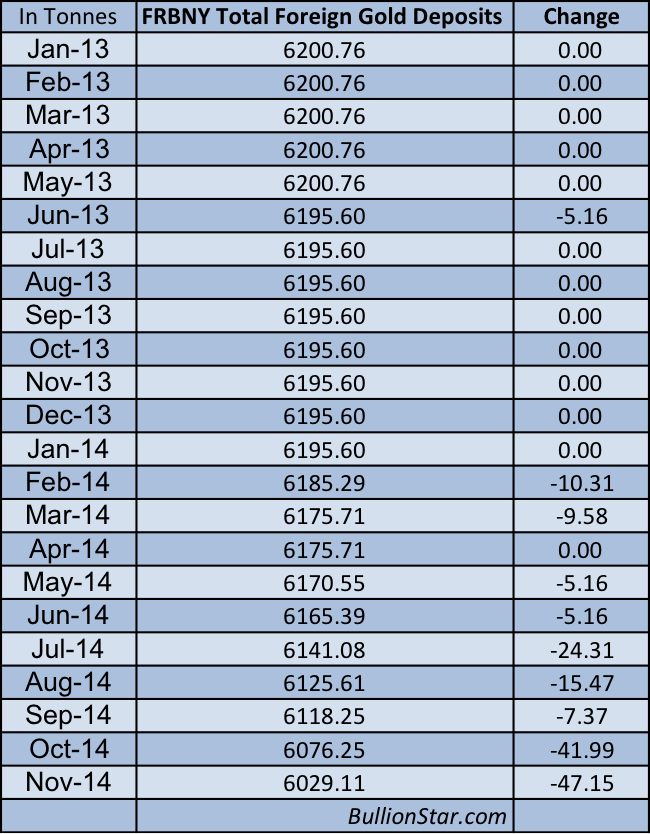 January till November 2014 the FRBNY was drained for 166 tonnes, if we subtract 123 tonnes The Netherlands got out that leaves 43 tonnes for Germany. The fact Germany claims to have repatriated 85 tonnes from New York in 2014 means they must have pulled 42 tonnes from the Manhattan vaults in December. By the end of this month (January 2015) the FRBNY will release the foreign deposit data of December and we’ll see if the numbers match. If not, there obviously is “a problem”. Otherwise, everything is going to plan and we are only left to think about what reasons BuBa has to take seven years to repatriate 674 tonnes. Perhaps this time is needed for out great leaders to shape a new international monetary system. Who knows? It can’t be because of logistical reasons as hundreds of tonnes of gold are shipped around the world every year – for example, Switzerland exported 2,777 tonnes of gold in 2013.