As always, please make sure you’ve read The Mechanics Of The Chinese Domestic Gold Market before continuing.

Finally last Friday the People’s Bank Of China (PBOC) updated its official gold reserves, from 1,054 tonnes, a figure reported since 2009, to 1,658 tonnes. Most gold analysts expected a number substantially higher than what was just disclosed. In this post we’ll analyze the 1,658 tonnes figure.

Before diving into the analysis, I like to share that I think it’s possible the PBOC hasn’t been completely honest by stating their gold reserves have grown by only 604 tonnes since 2009. I think in reality they have more than 1,658 tonnes, but let’s discuss that later on. In my analysis, I always try to start with official data and work my way from there, instead of start with speculative data and work backwards. It’s very easy in the gold space to rebut all official data, mainly because there is so much speculation. Therefor, I would like to start with the figure just disclosed, then I’ll try to answer, why 1,658 tonnes?

With regard to the update in gold reserves, the PBOC has stated on its website (in Chinese):

Based on our assessment of the asset value of gold and analysis of price movements, on the condition of not impacting or influencing the market, through various domestic and international channels, we gradually accumulated this part of gold reserves. The major channels of accumulation include: purifying domestic gold scraps and gold of various grades [杂金 in Chinese usually means non-standard gold including scraps so I have to paraphrase it], direct purchase of production, transaction in domestic and foreign markets, etc.

The official narrative is that the PBOC has bought 604 tonnes of gold in the domestic and international market. From my perspective, however, I think the PBOC has mainly been buying gold in the international market, as that’s where superfluous US dollars can be exchanged for gold. In the Chinese domestic gold market, physical gold is settled in renminbi. Gold the PBOC potentially has obtained in the mainland would be from state owned mines that not sell their gold through the Shanghai Gold Exchange, but have the gold directly transported to central bank vaults.

Not so long ago I wrote a lengthy post on PBOC gold reserves, it was titled PBOC Gold Purchases: Separating Facts from Speculation. The article contained a few concepts I still believe in:

According to the China Gold Association (and global trade data), mainland net gold imports from 2010 until 2014 accounted for 3,967 tonnes and domestic mining output over this period totaled 1,979 tonnes; a combined 5,964 tonnes.

To summarize we know that:

(2) Chinese private gold demand is all supplied through the SGE

With this knowledge, it’s easy to understand the PBOC did not buy the 5,964 tonnes of gold that was supplied to China 2010-2014 through import and mining. The 5,964 tonnes was consumed by private gold buyers at the Shanghai Gold Exchange. To repeat myself, PBOC gold purchases cannot be traced from global trade data or SGE withdrawals, as these occur in the realm of the private Chinese gold market.

One more reason why the gold exports to China we can see – for example in Hong Kong customs reports – are not addressed by the PBOC is that it can be observed  that gold bullion is being declared as either non-monetary or monetary gold when studying customs data from any country. If the PBOC can choose how to declare their bullion, they’ll choose monetary. These are typically the options available when making a gold customs reporting:

The essential difference between these four categories is that “monetary gold” is always blank; this category is never disclosed publicly! As we know, the PBOC prefers to buy gold in secret, so their gold transport surely is hidden in the eclipsed category “monetary gold”. It’s thus pointless to try to measure PBOC gold reserves from available customs data on gold, as this data doesn’t show gold monetary shipments. From trade data we can only see what’s entering China for private gold demand sold through the SGE.

From this perspective all official gold data presented above makes sense; all these thousands of tonnes of gold we could see entering China fell into the hands of private hoarders.

My supposition can be further strengthened if we re-read translations from Chinese gold industry officials I’ve published over the years. From Sun Zhaoxue, President of the China Gold Association in 2012:

We should advocate to ‘store gold among the people’ and guide a healthy positive development in this segment. In recent years, the domestic gold industry’s rapid growth provided good conditions for various uses of gold, as well as create space for this business to grow faster. China … has to catch the opportunity, while increasing its supply capacity, to push the ‘store gold among people’ strategy, actively extend the business value chain, increase gold investment types, encourage and promote individuals’ gold investment and consumption. Foremost, maximize the utilization of … gold retailers, increase sales channels, optimize sales network, strengthen branding and achieve to ‘store gold among the people’ and thus ‘store wealth among the people’. This is the objective under our gold strategy.

From an internal memo (only published in Chinese) from the PBOC on how to develop the gold market, 2012:

The tradition of gold investment and consumption is with our people/citizens. As the private sector grows at speed and living standard upgrades, private demands for gold jewelry, coins and investment gold are also growing quickly. A gold market with a rich diversity of products will help develop new investment channels, satisfy the varied demand, help investors make appropriate asset allocations, raise investment returns and protect our wealth assets.

There have been many clues the PBOC was buying gold as well, next to Chinese private demand, but for now we’re confirmed the gold we could see going into China over the years has been from the private sector. 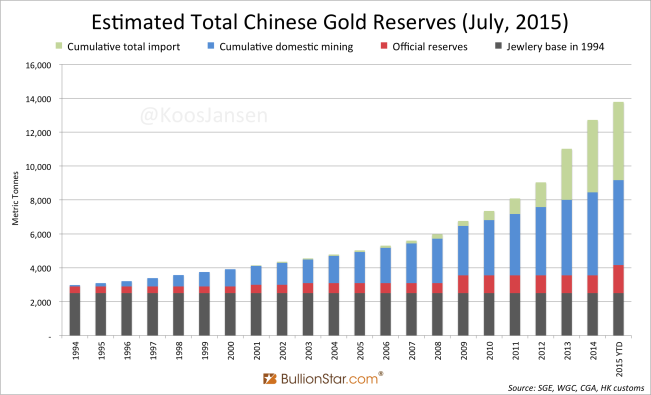 If I’m right in my analysis that the PBOC has mainly been buying gold abroad since 2009, there are currently 13,781 tonnes of gold in China, of which 1,658 tonnes are (confirmed) official gold reserves and 12,123 tonnes are private reserves. Needless to say, everything the PBOC potentially holds in addition to 1,658 tonnes official reserves must added to these estimates. (I do not rule out the PBOC is able to buy gold in the domestic market.)

The PBOC’s decision to disclose their official gold reserves at 1,658 tonnes cannot be viewed in isolation from global monetary affairs. Since the financial crisis in 2008, Europe and Asia have been very clear in their preference to gradually decrease the emphasis of the US dollar as reserve currency in the international monetary system. China’s strategy is to play multiple hands at the same time of which one is the SDR.

For the development of their economy, China aims to internationalize the renminbi. The composition of the SDR will be reviewed later this year. A requirement for a currency to be included in the SDR is that it’s freely usable. China will thus be required to disclose its reserves at least once yearly by groups of currencies. If we read the official statement on the gold reserves by the PBOC in Chinese, this is apparent from the part containing info about IMF’s Special Data Dissemination Standard (reserves disclosure).

With the US having the power to obstruct renminbi inclusion into the SDR, the Chinese have to play it safe. They are required to be transparent about their true gold reserves, but may not want to upset the US by disclosing an official gold reserve figure at 3,500 tonnes. The 1,658 tonnes figure, which is too little to rock the global financial order, though a sign that China assesses gold to be “an important element of international reserve diversification” may thus be an appropriate figure. It’s not in China’s interest to rush into a new international monetary system as they continue to diversify away from the US Dollar. 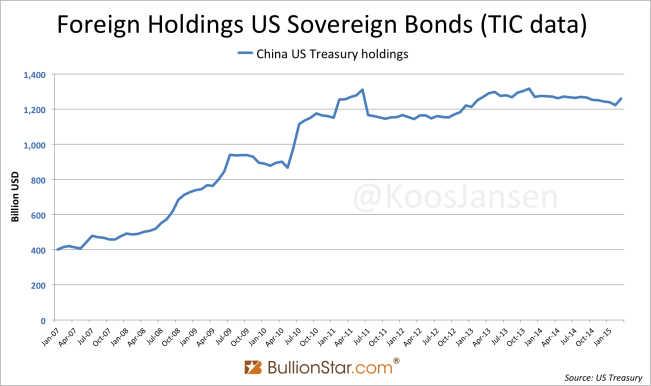 From the above chart, we can see China is not net selling US treasuries, but that they have stopped increasing their accumulated holdings since 2010. The Chinese aren’t ready for a major shift in the international monetary system yet. They are still working on further internationalization of the renminbi, the SDR inclusion, developing their financial markets and opening up their capital account. Only then will they unwind the US dollar. Until then, China will continue to adopt a slow step by step approach.