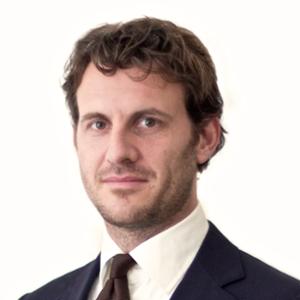 I wrote Scotiabank had released an unveiling report  on Chinese gold demand, written by Na Liu of CNC Asset Management Ltd.. In the report Na stated what I’ve been publishing for over a year: the amount of gold withdrawn from the vaults of the Shanghai Gold Exchange equals Chinese wholesale gold demand. This report put a little smile on my face as it was another confirmation of my research (SGE chairman Xu Luode previously confirmed the relationship between withdrawals and demand, at the LBMA forum in Singapore).

Soon after, I reached out to Na asking if he would like to share some of the details of his research. He was happy to tell me what he had found during his trip to Shanghai meeting the President of the SGE Transaction Department. Additionally he told me he was perplexed by the difference between actual Chinese demand and the numbers from the World Gold Council and China Gold Association. The discrepancy was such wide it made him doubt if he wasn’t missing anything. I told him I walked the same trail. I can remember when I first read the Chinese SGE weekly reports and couldn’t believe the tonnage being withdrawn from the vaults. Later on, when I discovered these amounts equal wholesale demand I spent quite a few weeks thinking through all data and evidence I’d collected. How can the Wold Gold Council be so wrong?

Ok, I was ‘a little’ off in predicting when mainstream media would find out about actual Chinese gold demand.

I sent Na all in-depth analyzes I’ve written on In Gold We Trust and BullionStar.com (I, II, III, IV, V, VI), which strengthened his understanding of the Chinese gold market even more. He was no longer hesitant to publish an additional report on the Chinese gold market, disclosing exactly what he found out in Shanghai. On September 29 The Mystery of China’s Gold Demand was released [brackets added by me for in-depth analyzes]:

The Mystery of China’s Gold Demand

Over the years, we, like most investors, track China’s gold demand by following the estimates made by the China Gold Association (CGA) and the World Gold Council (WGC). For instance, the China Gold Association said China’s total gold demand in 2013 was 1,176.4 tonnes and the World Gold Council said China’s total “consumer demand” was 1,065.8 tonnes. So, in 2013, China’s gold demand was slightly over 1,000 tonnes, we initially concluded.

This is why we were shocked by what the Shanghai Gold Exchange (SGE) told us earlier this year. Back in May, we participated in a Canadian institutional investors’ trip to China organized by Scotiabank. The Canadian delegation visited the Shanghai Gold Exchange and met with President of the SGE Transaction Department and other senior officials. The delegation was told by our Chinese host that China’s gold demand was about 2,200 tonnes in 2013, judged by the withdrawal amount from the SGE vaults.

Apparently, the SGE’s estimate of Chinese demand is much higher than the estimates made by CGA and WGC. If China’s actual gold demand is over 2,000 tonnes rather than slightly over 1,000 tonnes, then the gold market could be a lot tighter than thought. As such we asked a lot of questions to the SGE executives in the meeting and when we were back, we carefully reviewed the trading mechanism of the SGE in the past few months.

After all our work, as we wrote on September 25, we are now of the view that to understand China’s real physical gold demand, investors should simply look at the weekly withdrawals from Shanghai Gold Exchange vaults (Exhibit 1). The weekly withdrawal figures provide a much more accurate data series that reflects China’s aggregate wholesale demand in a timely way. This is because for tax purposes all gold imported into China and all gold produced within China must pass through the vaults once, and only once, before reaching jewellery makers, investors, industrial users, and consumers.

We hesitated over the past few months in publishing our findings from our May meeting with the SGE as these findings are non-mainstream. Now, as we are becoming more convinced, we want to share the following comments made by the SGE executives to the Canadian delegation.

[as I’ve written in Is The World Gold Council Clueless On Chinese Gold Demand?]

Second, none of the 2,200 tonnes of gold was bought by the Chinese central bank. The President said: “The PBOC does not buy gold through the SGE.”

Fourth, in response to our question about the source of the 2,200 tonnes, he replied: “About 1,500 tonnes from imports, some 400 tonnes from domestic mine output, and the rest is recycled gold.”

And last, when we asked why the China Gold Association’s number is so low, the President said: “They mainly cover the gold sales through the gold shops. This is their main source of information. And their number is quite useful in that way. However, our system has broader coverage.”

So here is our current conclusion after several months of deliberation. We think the SGE withdrawal data is a fair representation of China’s wholesale gold demand. Again, this is because for tax purposes all gold imported into China and all gold produced within China must pass through the vaults once, and only once, before reaching jewellery makers, investors, industrial users, and consumers.

Lastly, we do note that in recent weeks, the withdrawal number is getting bigger (Exhibit 1). This might indicate the de-stocking process is coming to an end. We maintain our relatively cautious “market weight” call for the gold sector from a China perspective for the time being. In the meantime, we will closely monitor the weekly withdrawal data to decide whether we should turn more positive. 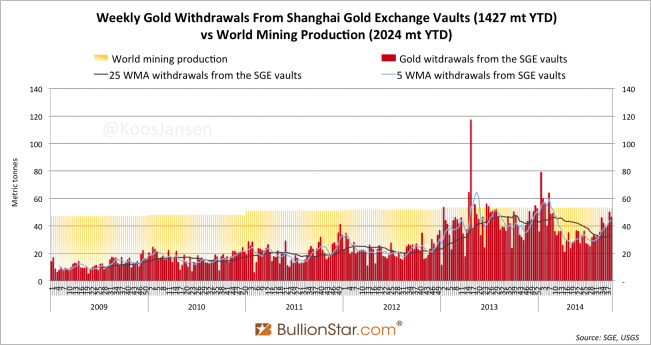 Not only does this, again, confirm SGE withdrawals equal Chinese wholesale demand, additionally it confirms that the PBOC does not buy 1 gram of gold through the SGE (as I’ve explained in this post).

Two more important statements for me to make:

1) Because we have additional consolidation about the workings of the SGE, Chinese import and PBOC purchases, the next chart is now confirmed to be fairly accurate. China holds (including September 2014) approximately 11,224 tonnes in non-government gold reserves and officially 1,054 tonnes in reserves at the PBOC. However, from various high ranking Chinese officials we know the PBOC has been steadily accumulating gold since 2009, which make current PBOC reserves likely to be 4,000 tonnes. In total there are about 15,224 tonnes of physical gold reserves in China mainland. 2) There is now so much evidence the demand numbers from the World Gold Council are erroneous the WGC is obligated to either revise their numbers upwards, or cease reporting on the Chinese gold market all together. Until then their numbers on Chinese demand are completely unacceptable.