Another piece of the puzzle

The more I read about it the more clear it becomes that the euro, at first a monetary block in Europe, was spawned right after the US abandoned gold in 1971. The European Community (EC) block was the biggest threat for the US hegemony in the seventies, if Europe would unite it could break the USD. Europe’s aggregated gold reserves were (and still are) greater than US holdings, a crucial reserve asset when fully utilized.

Soon after the inception of the Bretton Woods system in 1944 the US needed to suppress the price of gold because they printed far more dollars than they had gold to back it up, finally the suppression failed in 1968 when the London Gold Pool collapsed. What followed was a two-tier system; monetary gold was valued at a fixed price far below the free market price of gold.

The two-tier system created by the American monetary wizards was anything but sustainable; foreign central banks could buy gold at the US Treasury for dollars at a discount, subsequently selling the gold on the free market for a higher price, though the agreement was central banks would not trade with the private market.

Because the dollar was overvalued (against gold) European central banks exchanged billions of dollars for thousands of tonnes of gold, draining US gold reserves. 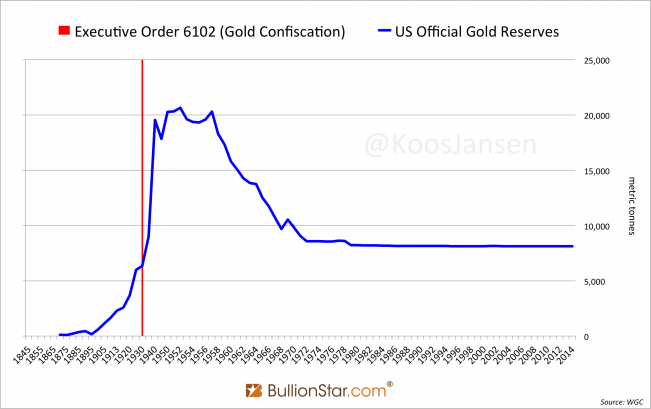 That’s when Nixon temporarily suspended convertibility of dollars into gold on August 15, 1971.

Next up for the US was to completely remove gold from the international monetary system. Having the dollar as the sole monetary anchor would ensure the US from world domination. Europe, on the other hand, tried to re-introduce gold into the system at the free market price.

In the next quotes we can read how Henry Kissinger, National Security Advisor and Secretary Of State at the time, was discussing the matter with his team.

Mr Enders to Mr Kissinger about the proposal (re-introduction of gold) from Europe (EC).

…Mr. Enders: Both parties [US and EC] have to agree to this. But it slides towards and would result, within two or three years, in putting gold back into the centerpiece of the system—one. Two—at a much higher price. Three—at a price that could be determined by a few central bankers in deals among themselves.

…They would determine the value of their reserves in a very small group.

Mr Kissinger: And we would be on the outside.

Mr. Enders: The policy we would suggest to you is that, (1), we refuse to go along with this—

…Secondly, Mr. Secretary, it does present an opportunity though—and we should try to negotiate for this—to move towards a demonetization of gold, to begin to get gold moving out of the system.

…It’s against our interest to have gold in the system because for it to remain there it would result in it being evaluated periodically. Although we have still some substantial gold holdings—about 11 billion—a larger part of the official gold in the world is concentrated in Western Europe.This gives them the dominant position in world reserves and the dominant means of creating reserves. We’ve been trying to get away from that into a system in which we can control—

…If they have the reserve-creating instrument, by having the largest amount of gold and the ability to change its price periodically, they have a position relative to ours of considerable power.

… I think we should look very hard … at very substantial sales of gold—U.S. gold on the market—to raid the gold market once and for all.

The US was against any form of European monetary cooperation. The next quotes are from a phone call between Kissinger and Under Secretary Simon:

In this political battle the US and Europe remained on speaking terms (both not showing their hand). But the EC was occasionally poking the US; if necessary they would trade gold in secret at the free market price.

1. IN A CONVERSATION WITH ECON MIN, FREYCHE, ECONOMIC AND FINANCIAL ADVISOR TO PRESIDENT POMPIDOU, SAID GOF FULLY UNDERSTANDS OUR VIEWS ON PURCHASES OF GOLD BY CENTRAL BANKS AT A PRICE ABOVE THE MONETARY PRICE. FREYCHE SAID THAT, ALTHOUGH THERE ARE PRESSING TECHNICAL REASONS WHY THE CENTRAL BANKS OF THE EC MIGHT WANT TO BUY AND SELL GOLD AMONG THEMSELVES AT A PRICE ABOVE THE MONETARY PRICE, THE GOF AS WELL AS ITS EC PARTNERS WERE VERY RELUCTANT TO DO THIS, PRIMARILY BECAUSE THEY

HAD NO DESIRE TO TAKE A STEP WHICH MIGHT BE INTERPRETED AS AN ATTEMPT TO CREATE A MONETARY BLOCK IN OPPOSITION TO OR RIVALRY WITH THE U.S. IN OTHER WORDS, HE SAID, FRANCE WAS HOLDING BACK FROM SUCH A DECISION BECAUSE OF A DESIRE TO DEMONSTRATE GOODWILL TOWARD THE U.S. NONETHELESS, HE CONTINUED, THE EC MIGHT EVENTUALLY BE FORCED TOTAKE THIS STEP. SIXTY-FIVE PERCENT OF ITALY’S RESERVES AND 40 PERCENT OF FRANCE’S WERE IN GOLD. IT WAS WELL KNOWN THAT NEITHER ITALY NOR FRANCE WAS WILLING TO PART WITH ANY OF THIS GOLD AT THE MONETARY PRICE WHEN THIS PRICE WAS SO MUCH LOWER THAN THE FREE MARKET PRICE. THUS, A LARGE PART OF THE RESERVES OF THESE TWO COUNTRIES WAS IN EFFECT FROZEN AND COULD NOT BE USED IN THE SETTLEMENTS AMONG THE “SNAKE" COUNTRIES REQUIRED TO MAINTAIN THE SNAKE. THIS, OF COURSE, WAS ONE OF THE REASONS WHY ITALY HAD SO FAR BEEN UNWILLING TO ENTER THE SNAKE. IF THIS PROBLEM BECAME SERIOUS ENOUGH SO THAT THE EUROPEAN CENTRAL BANKS FELT OBLIGED TO BEGIN EXCHANGING GOLD AMONG THEMSELVES AT A PRICE ABOVE THE MONETARY PRICE, FREYCHE SAID THAT THIS DECISION WOULD NOT BE TAKEN WITHOUT FULL PRIOR CONSULTATION WITH THE U.S. AUTHORITIES. HE ALSO SAID THAT EXCHANGES OF GOLD AT SUCH A PRICE WOULD BE RESTRICTED TO EC CENTRAL BANKS AND IT WAS POSSIBLE THAT THE PRICE AT WHICH THESE TRANSACTIONS WOULD BE CARRIED OUT WOULD BE KEPT SECRET.

2. COMMENT: FREYCHE’S CONCILIATORY ATTITUDE ON THIS MATTER IS WELCOME. NONETHELESS, WE BELIEVE, PARTICULARLY IN VIEW OF THE MANY PUBLIC STATEMENTS BY SENIOR FRENCH OFFICIALS ON RIGHT TO BUY AS WELL AS SELL GOLD AT MARKET PRICE, THAT FRANCE’S OBJECTIVE CONTINUES TO BE PRESERVATION OF SIGNIFICANT ROLE FOR GOLD IN MONETARY SYSTEM AND, IN THAT PERSPECTIVE, TO OBTAIN AGREEMENT WITH EUROPEAN PARTNERS TO SELL GOLD IN INTRA-EUROPEAN SETTLEMENTS AT VALUE NEAR TO MARKET PRICE. THIS BEING THE CASE, FREYCHE’S ASSURANCE NO SUCH DECISION WOULD BE REACHED WITHOUT PRIOR CONSULTATION WITH U.S. IS IMPORTANT AND USEFUL. IRWIN

1971, December 13, negotiations between Nixon, Pompidou and Kissinger about the value of currencies and gold