The End Of Bretton Woods And The Race To The Bottom, 1971

I stumbled upon a few interesting reads about the end of the Bretton Woods system in August 1971. In those years there was a lot of monetary turmoil, just like now. Before 1971 the US dollar was pegged to gold, and foreign countries held dollars in reserve because the US had promised they were “as good as gold". The dollar came under pressure because the US money supply grew, but they insisted to keep the gold price at $35. Many European countries were redeeming their dollars for gold, because the dollar was overvalued relative to gold. 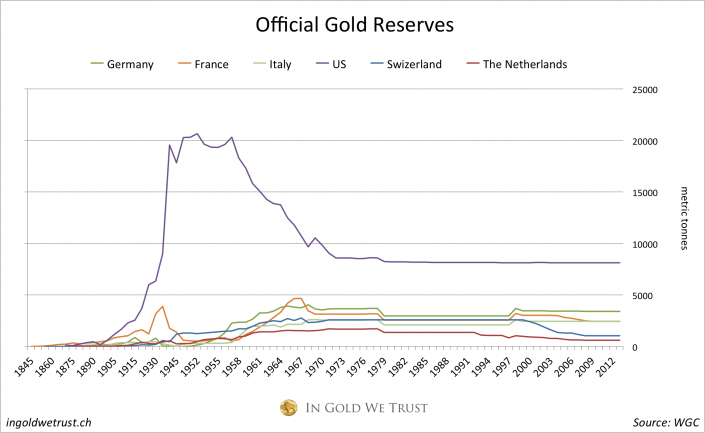 This led to a drain in US official gold reserves (I you are wondering were the rest of the US gold stock went, consider reading this)

Note, due to technical reasons from here on this post might cause errors on tablet devices and mobile phones. I hope to solve this issue within 24 hours. In the meantime you can read this post on desktop/laptop browsers.

The US wished to devalue the dollar against all currencies (in the hope to boost export and stimulate domestic industries) except gold. A higher gold price in dollars would increase the dollar value of European gold holdings. Additionally it would hurt the credibility of paper money in general and thus could destabilize the US dollar Hegemony. The US was keen to exploit the advantages of issuing the world reserve currency, without limitations being imposed by gold.

The French were the most critical on US’ monetary policy, in 1965 the French president De Gaulle made a speech in which he stated gold should be the base in the international monetary system, not the dollar.

The London Gold Pool, a group of nations controlling the price of gold at $35, collapsed in March 1968. Hereafter a two-tier system existed; a free market gold price and an international payment price under the Bretton Woods system (at $35). Central banks could actually buy gold from the US Treasury at $35 and sell it on the open market at $40. Subsequently the gold window was closed by Nixon in August 1971 – after pressure from his Treasury Secretary John Connally. In a TV presentation he announced to temporarily suspend the convertibility of dollars into gold (because “evil speculators" were attacking the dollar), and so the Bretton woods system came to an end.

Nixon also announced an import surcharge of 10 %, which made foreign goods 10 % more expensive for American consumers, to boost domestic growth. After the Nixon Shock negotiations started between the biggest economies about the value of their currencies relative to each other and gold. I will publish a few historical diplomatic documents from this era. Below you can read a phone call Nixon made with Kissinger on October 28, 1971.

Arthur Burns: US Chairman Of The Federal Reserve

Peter Peterson: US Assistant To The President For International Economic Affairs

George Shultz: US Director Of The Office Of Management And Budget

Paul McCracken: US Chairman Of The President’s Council of Economic Advisors

Two months later Kissinger, pretending not to know anything about economics, negotiated these monetary affairs with Georges pompidou. On December 13 at Azores at Mr Pompidou’s residence.

And another meeting the next day at Azores between Kissinger and Pompidou.

Eventually, after the currency war, the dollar had lost more than 50 % of its value in 1981. Devaluation can be a short term fix but, but causes long term problems.