Zooming In On The Chinese Gold Lease Market

The primary reasons mainstream gold analysts (and the media) don’t use Shanghai Gold Exchange (SGE) withdrawals as an indicator for Chinese wholesale gold demand, are – after a few others have been tested – Chinese Commodity Financing Deals (CCFD). Regarding gold these financing operations can be be conducted through round-tripping or gold leasing. Because of the structure of the Chinese gold market round-tripping gold flows are completely separated from the Chinese domestics gold market – the SGE system, and thus SGE withdrawals. There is no need to further investigate round tripping for our understanding of the Chinese domestic gold market.

Turning to gold leasing. The Chinese gold market is structured as such that gold leases are settled on the SGE; lessor and lessee come to an agreement after which gold is transferred from the lessor’s SGE Bullion Account to the lessee’s SGE Bullion Account. As I’ve stated previously lessees will only withdraw gold from the vaults of the SGE when the leased gold will be used in genuine gold business (The World Gold Council agreed with me in email correspondence), as a lessee that is merely seeking cheap funds has no interest in obtaining physical gold, he prefers to sell the leased gold spot at the SGE for its proceeds. Therefor, leasing gold for acquiring cheap funds adds little distortion to total SGE withdrawals when used as wholesale gold demand indicator.

However, to get to the bottom of this, which seems to be my mission in life, we must zoom in on the Chinese gold lease market. Below I present an article written by Minsheng Banking Corp in 2014, translated by Soh Tiong Hum and BullionStar’s Sales Executive See Hong Kang. The article provides essential data on the Chinese gold lease market, for the first time we can read how total lease volume is compounded, what industry segments are leasing how much gold and in what tenors total volume is divided. In a separated post we will analyze these numbers, as I’m still talking to SGE staff and Chinese banks to be positive on the meaning of all numbers.

If you are confused about what the article states as being Chinese consumer gold demand (1,170 tonnes in 2013), consider this China Gold Association (CGA) estimate is measured at retail level and likely only from sales by CGA members. To familiarize with all demand metrics used in the Chinese gold market read this post. 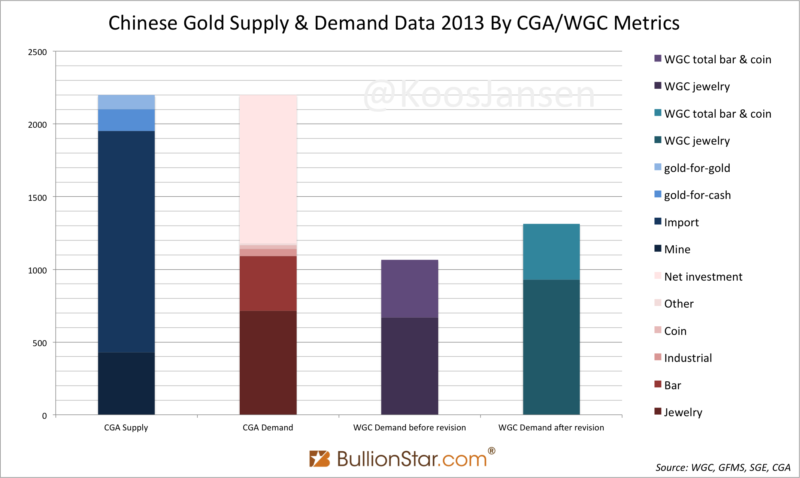 Abstract: In 2013, domestic consumer demand for gold reached a record high of 1,170 tonnes for the first time, more than 35 % over 2012. As rationality returns to consumers, 2014 domestic gold demand may retrace back to normal levels after being depleted by last year’s explosive growth. As imports are able to meet gold demand, China’s gold market shall move from shortage to balance. We expect this year’s first quarter gold and jewelry spending year on year growth will drop to 10 – 20 % of the normal level, while second quarter gold consumption demand will slow further. Expected 2014 domestic gold demand should stay between 900 – 1200 tonnes.

2013 ushered in explosive growth in the gold lease market. The domestic gold lease volume grew substantially to 1,070 tonnes, an increase of 268 % y/y. Based on demand, 2013 gold leasing by enterprises and brand makers reached 781.1 tonnes, 73 % of the year’s total volume, which shows that China’s jewelry market is the most important customer segment. From the rate of growth, interbank gold loans grew rapidly. 2013 interbank leasing increased 439 % y/y which indicates that financialization of gold between China’s banks have strengthened.

Because China’s economy and credit market both face risk of deleveraging this year, gold leasing can satisfy banks’ need to expand their business as well as meet financing needs of gold enterprises when there is a credit crunch in the background. Therefore deleveraging is conducive to the growth of the gold lease market. 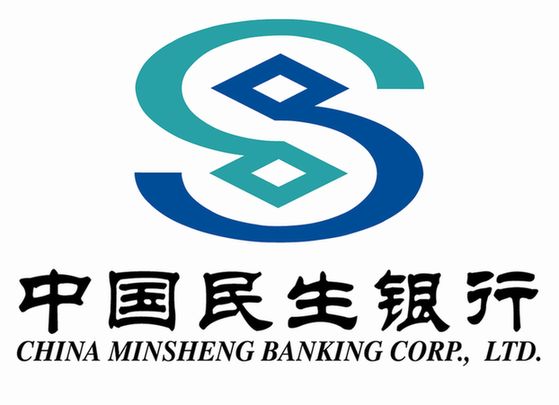 Domestic gold demand in 2013 grew enormously due to substantial fall in the gold price. National gold consumption grew to all-time high of 1,170 tonnes, a 35 % increase y/y. Although last year’s gold demand was not evenly distributed, volatile fluctuation between domestic and foreign gold prices reflected the fluctuation in demand. Large increases in gold imports were able to satisfy this sudden increase in demand. We expect this year’s jewelry consumption growth to retrace to normal levels. Gold consumption in 2014 shall maintain between 900 – 1200 tonnes. Following a rise of gold inventory in recent years, gold leasing enters a phase of explosive growth. 2013 gold leasing reached 1,070 tonnes worth RMB 300.6 billion, 268 % higher y/y. With deleveraging going on in 2014, both banks and clients have stronger interest to push gold leasing. Therefore gold leasing should maintain the trend of high-speed growth, hopefully becoming a bright spot when banks are going through downturn.

After explosive growth in 2013, domestic gold demand should retrace to normal this year

As gold imports increased, the ability of commercial banks to supply the gold market increased visibly. Since 2012, China’s import from Hong Kong and SGE’s settlement volume on a monthly basis appeared to be consistent. The logic is really simple: The more gold the commercial banks are able to import, the stronger the ability of other participants in the gold market to provide gold liquidity. Conversely, if the banks lower the volume of gold imports, the ability of participants in the market to provide liquidity for gold would weaken. This year, the banks operating in the gold market have seen a test of their ability to react to a demand growth explosion.

After rise in demand, domestic gold demand will retrace to normal

It’s noteworthy that 2013’s explosive demand may be ‘abnormal’ consumption because it was triggered by the major correction in the international gold price since many years. As rationality returns, it is difficult to sustain this demand this year. Fact is consumption demand in the second half of 2013 already began weakening. China’s gold jewelry consumption growth y/y already weakened from July’s 44.7 % to 33.9 % at year-end. Demand at the SGE also weakened visibly. SGE’s monthly spot gold transactions fell from a year-high of 358 tonnes in July to 210 tonnes by October. In addition, SGE’s monthly withdrawals fell from 235 tonnes in July to 139 tonnes in October. We estimate that both figures will continue to slowdown and we should see the growth rate return to its’ normal 10 – 20% and gold demand at between 900 – 1200 tonnes.

The scale of gold lease market will continue to grow quickly

Over the past few years, the gold lease market has developed from nothing till the scale it is today. At last count in 2013, 23 commercial banks have gold leasing operations and the businesses participating in leasing have mushroomed to close to a thousand. In terms of scale, last years leasing market grew explosively with leased volume reaching 1,070 tonnes, a 268% increase y/y. Based on demand, 2013 gold leasing by enterprises and brand makers reached 781.1 tonnes, 73% of that year’s total volume, which shows that China’s jewelry market is the most important customer group. From the rate of growth, interbank gold loans grew rapidly. 2013 interbank leasing increased 439% y/y, which indicates that financialization of gold between China’s banks has strengthened. Because China’s economy and credit market both face risk of deleveraging this year, gold leasing can satisfy banks’ need to expand their business as well as meet financing needs from gold enterprises when there is a credit crunch in the background. Therefore deleveraging is conducive to the growth of gold leasing.

The gold leasing volume reached 398.06 tonnes in 2012. The breakdown of the lease volume:

Based on growth, gold lease demand in 2013 increased by more than 100%. Interbank lending grew by 439 %, refining companies leasing grew 135 % and brand name companies leasing increased 116 %. Increase in loans between commercial banks indicate that rise in demand pushed the growth in activity between commercial peers as well as increasing financialization of gold in China’s banks. Based on demand, 2013 gold leasing by enterprises and brand makers reached 781.1 tonnes, 73% of that year’s total volume, which shows that China’s jewelry market is the most important customer group.

China’s economy and credit market are facing risk of deleveraging this year. In the deleveraging process, ‘big’ business drivers that banks enjoyed in the past few years are consolidating whereas ‘small’ drivers that have unique proposition have the prospects to become a bright spot.

Firstly, first quarter economic statistics came in below market expectations. Important economic numbers like manufacturing value added, retail sales and investments look weak which leaves hints that first quarter economic growth is likely to come in below government target. Secondly, this year’s M2, new loans, financing numbers are evidently slowing down which indicate that China is undergoing deleveraging. In this macro environment, banks are trapped in a dilemma. On one hand, deleveraging forces banks to be wary of risks associated with ‘big’ businesses that have been expanding tremendously. On the other, banks are pressured to deliver profits. Under pressure from such concerns, banks are more willing to develop businesses that are not constrained, not high-risk and have unique propositions. Gold leasing can satisfy banks’ need to expand their business as well as meet financing needs of gold enterprises when there is a credit crunch in the background. Therefore deleveraging is conducive to the growth of gold leasing.

Along with the flow, Shenzhen has best competitive advantage to develop gold market 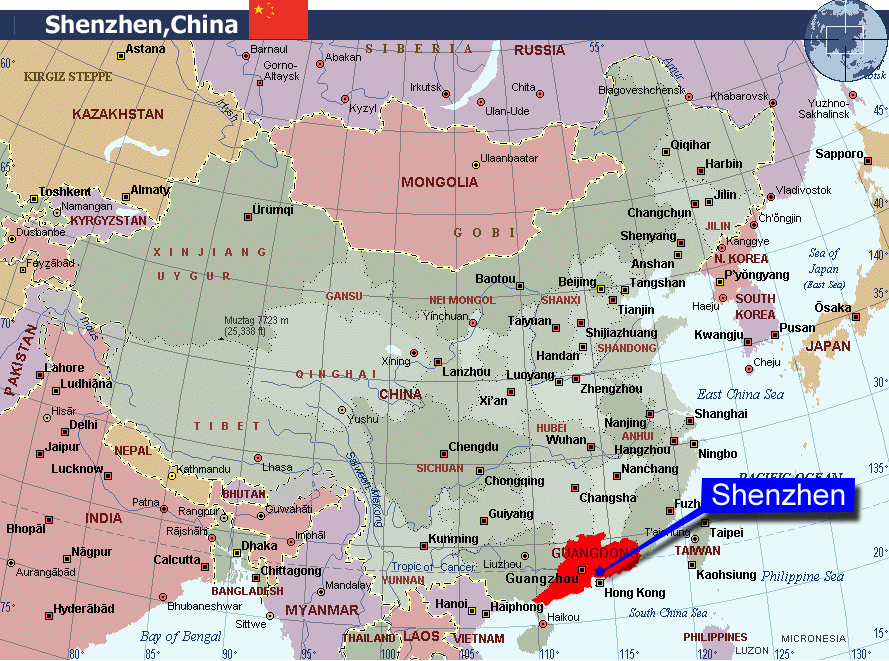 At the moment the Shenzhen gold market has SGE membership system, commercial banks and OTC gold trading. Products include jewelry, physical gold, paper gold as well as gold leasing. SGE’s historical data shows that Shenzhen physical gold delivery is 45% of national total that makes it the largest delivery location. Data from the Shenzhen Gold and Jewelry Association states that gold usage in Shenzhen city is 90% of national total. Shenzhen is therefore China’s largest spot gold market driven by trading in physical gold. Based on incomplete data, there were 921 finished gold lease deals in Shenzhen in 2013, with an accumulated gold lease volume of nearly 110 tonnes. This number was 26.36% of the total gold lease volume of gold-using enterprises in China. Additionally, Shenzhen has a massive OTC market but lacks sufficient data for evaluation. Based on estimates, OTC market volume in Shenzhen is comparable to spot trading on the SGE. The OTC market comes in 2 parts:

Shenzhen is already China’s most important gold market. It is the largest jewelry-processing base, the largest demand for spot gold, the largest wholesale center, the largest physical gold delivery location and the largest OTC market. Shenzhen has the most competitive advantage to develop gold business. Backed by strong gold demand and manufacturing, gold leasing in Shenzhen also has tremendous potential and room for development.