At the LBMA conference in Vienna, which was held from 18 – 20 October 2015, the Executive Director of the Austrian central bank, Peter Mooslechner, was interviewed by Editor-in-Chief for Kitco News, Daniele Cambone. You can watch the interview here. This particular interview is interesting because the central banker from Austria made some exceptional remarks about repatriating gold and indirectly about gold management by central banks around the world in our current economic climate. Central bankers have a long history of keeping silent about anything related to their gold policy, and this interview suits the tradition in part, though Mooslechner by accident told us what’s happening behind the scenes.

Many central banks around the world are aware the international monetary system is moving away from the US dollar and that the role of gold will (officially) be much greater in the future. In this development central banks benefit from a smooth and slow transition to a new system, as sudden shocks will bring the global economy in a free fall and more time provides better preparations. Central bankers prefer slow and attentive change. Signs of the slow development towards gold by central banks can be seen across several continents. In Europe slowly more and more countries are repatriating their gold from the UK (Bank Of England) and the US (Federal Reserve Bank Of New York). Certainly not all their gold but weighed amounts and in the case of Germany and Austria the gold is repatriated over several years. If all European countries would repatriate all their gold at once it would cause a panic in financial markets. In the East, Russia and China are increasing their gold reserves every single month by relative small amounts, respecting the slow development towards gold. Asian central bankers differ from their European colleagues because they verbally acknowledge the role of gold in finance. In 2004 Zhou Xiaochuan, governor of the People’s Bank Of China, said:

… China’s gold market should move from commodity trade to financial product trade. Gold is a commodity that combines the attributes of a currency, financial commodity and general commodity. … gold still has a strong financial nature and remains an indispensable investment tool. In financial centers in the world, the gold market – together with the money market, securities market and FX market – constitutes the main part of the financial market.

Obviously all these central banks are aware what the future will hold. How else can we explain Europe’s repatriating gold policy and Asia’s buying gold policy?

Candid statements from European central bankers regarding their gold policy are scarce. The slow development towards gold previously described is usually covered in excuses by European policy makers. I can recall the Dutch Minister Of Finance, Jeroen Dijsselbloem, was asked in a television interview why the Dutch central bank (DNB) had covertly repatriated 123 tonnes of gold from the Federal Reserve Bank of New York in 2014. Dijsselbloem answered with a condescending smile, saying, “ the decision was made by DNB to spread its gold stock in a more balanced way, but it was of little importance”. Of course the military operation that DNB had carefully planned and executed over the course of two years was of utmost importance for the financial well being of the Netherlands, but Dijsselbloem could not openly acknowledge this importance because of the sensitivity of the subject. Just like Jean-Claude Juncker said in 2011:

With the slow development towards gold in mind, let us analyze the interview with Mooslechner in order to distil the genuine reason why Austria is repatriating its gold from London. Below is the transcript of the interview supplemented by my comments.

I think it differs a lot. For a small central bank like we are, and we have joined the Eurosystem some time ago, the role of gold has significantly changed. It was of big importance during the period of the Bretton Woods System, it played a vey active role also in the management of our over all reserves. But having become now part of a much greater monetary and economic area, it has transformed into something like the basic part of reserves to be hold for as a liquidity buffer or for security reasons, but not so much an active part of management of gold reserves anymore.

Interesting. Mooslechner states that his central bank views its 280 tonnes of gold as “the basic part of reserves”. This is in line with the Balance of Payments and International Investment Position Manual (BPM6) drafted by the IMF, in which gold is regarded as “the only case of a financial asset with no counterpart liability” and is therefor listed at the top of all reserve assets – above SDRs.

Does the Austrian central bank have plans to increase its gold reserves? Last estimates were 43.9 %.

We don’t think so that we have to increase, because we are now part of the much bigger intervening power of the Eurosystem and the ECB. But what we have decided in the last strategic …. uhm … documents, is to keep the share of gold and the amount of gold constant for the time being.

Apparently, the Austrian central bank’s gold policy is communicated in strategic “uhm… … documents". I wonder if these documents are publicly accessible? I guess not.

You want to repatriate 3.5 billion pounds of the gold, which is currently in the UK, moving it back to Austria over the course of five years. Why did you decide on this move?

One aspect of the genuine reason for the Austrian central bank to repatriate gold from the UK was passingly disclosed by the Austrian general court of auditors in February 2015:

The OeNB had no appropriate concept to perform audits of its gold reserves. … The lack of audit measures represented a gap in the internal control procedures of the OeNB.

The problem was not the concentration risk of gold in London, but the fact OeNB couldn’t audit its gold abroad.

Carry in your mind, a few years before the report by the general court of auditors was published in 2015, the Austrian central bank started to unwind its gold leases. Its conventional gold leases to commercial banks stood at 116 tonnes in 2009, but was brought down to 24 tonnes in 2013. 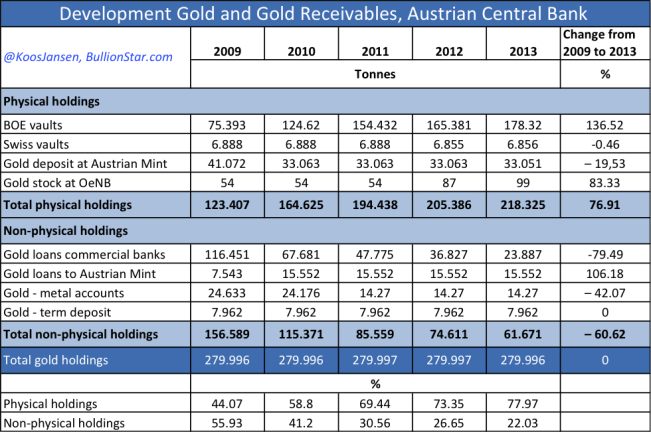 The fact Austria started securing its gold bullion in 2009 indicates the decision by OeNB to repatriate was not simply because the general court of auditors saw a concentration risk in 2015. The decision to repatriate was taken a long time ago, likely when the global economic crisis and the eurocrisis erupted – Germany and the Netherlands decided to repatriate in 2012.

Mooslechner used the concentration risk argument by the general court of auditors as an excuse. As we know now, there have been safety issues with the Austrian gold in London, one example that we know of is that OeNB was not able to audit the gold until 2013. But if Mooslechner would have used this argument in the interview as the sole reason to repatriate all hell would break loose. And so he used an excuse, the concentration risk.

Note, the concentration risk excuse was also used by the Netherlands. Apparently this was communicated among European central bankers. Nice teamwork.

It seems that Germany started the movement one day asked for the gold back that was held in New York, you think that had anything to do with it? Because we so many other countries follow suit after Germany’s announcement.

Yes, Daniela ask him! In 2011 Germany’s central bank Executive Board Member Carl-Ludwig Thiele testified to the German parliament’s budget committee, “We’re in negotiations with our partner central banks [the Federal Reserve Bank of New York and the Bank Of England] to develop auditing rights”, according to Bloomberg. This sounds like the exact same problem the Austrians ran into in London. Maybe, just maybe, this is all connected. Let’s read what Mooslechner answered:

Perhaps this could be also be labeled as some sort of economic nationalism, which has risen politically in I think a lot of countries. …

A few seconds ago Mooslechner stated OeNB is repatriating because the Austrian general court of auditors observed concentration risks at the BOE. Now, he turns around and states Austria is repatriating because of economic nationalism. If we take into account OeNB has been working on securing its gold bullion since at least 2009 and tried to audit its gold in vain, economic nationalism sounds more like the genuine reason to repatriate than concentration risks. Mooslechner is actually saying OeNB prefers to store its gold on its own soil, instead of storing it abroad and risk a foreign institution (BOE) to use the gold at its own discretion. If the BOE would be capable of doing such things no wonder OeNB was not granted any auditing rights.

If we see continued easing in Europe however, what impact do you feel that would have on gold?

It depends, if uncertainty increases in parallel, for whatever reason, for example reasons which are situated in Asia in the Chinese situation, then perhaps gold might become more attractive even in Europe. On the other hand if Europe, as it’s the view form the US for example, at the moment if Europe can improve its economic situation as planned in our forecast, then this might not have a big impact on the situation of the gold market.

Peter, thank you so much for your thoughts today.

Thanks indeed Peter, that’s very honest, but in fact common knowledge, when the shit hits the fan “gold might become more attractive even in Europe”. Let’s hope Austria has a fair share of its gold repatriated in due time.

In conclusion, European countries are repatriating gold from the UK and US simply because the abroad depositories are not considered safe. Therefor, gently the gold is being repatriated in segments, respecting the slow development towards gold.