Austria Expresses Concern Over Their Gold At BOE

The report is written in German, but from being Dutch (my native language is similar to German), using Google Translate, having spoken to Peter Boehringer about this and using the English introduction from the Rechnungshof’s report, we can squeeze the essential bullion points from the report.

I will sum up the highlights. Let’s start with a quote from the English introduction:

The Austrian Court of Audit expresses great concern about the disproportionate amount of official gold reserves (229.6 tonnes) stored at the Bank Of England (BOE), which will be the Austrians excuse for repatriating, “the gold depository contract with the depository in England contained deficiencies" and, “gold reserves stored abroad, internal auditing measures were lacking". They’re putting it blunt for an official source on a topic so sensitive as gold. 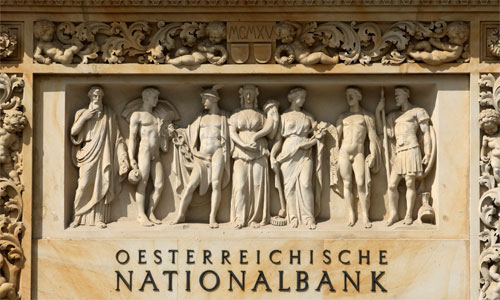 The OeNB didn’t have any proper auditing rights or access to their own gold at the BOE until 2013. This is line with what Bundesbank executive board member Carl-Ludwig Thiele said in 2011, “We’re in negotiations with our partner central banks [FRBNY] to develop auditing rights.” Apparently, foreign central banks had no rights whatsoever to audit their own gold at the BOE or Federal Reserve Bank of New York (FRBNY) until 2013.

Though it hasn’t been only imprudent policy from the BOE; between 2009 and 2013 there had been no audit protocol for the Austrian gold by the OeNB itself. From the February 24, 2015, report:

The OeNB had no appropriate concept to perform audits of its gold reserves. … The lack of audit measures represented a gap in the internal control procedures of the OeNB. The OeNB started in March 2014 with the development of an ​​audit program, which included all the gold holdings of the OeNB.

In May 2014, for the first time, a delegation from the Austrian accountability office travelled to London in order to check on Austria’s gold reserves stored in vaults at the BOE.

Strikingly the Bundesbank’s current gold repatriation schedule was released January 16, 2013. The Austrian central bank decided on January 17, 2013, to “adopt measures … in terms of the management of gold stocks … that should reduce the risk of asset losses of the OeNB”. Repatriating gold is highly contagious at the moment.

What European country will be next in the repatriating? Austria?

After Germany received its first gold bars from the US in 2013, the Dutch central bank surprised the world on November 21, 2014, by stating they had successfully repatriated 122.5 tonnes from New York (which according to me was planned long before), on December 5, 2014, the Belgian central bank announced they were investigating to repatriate their gold reserves, followed by the Austrians on December 12, when newswire Der Standard stated:

…In Austria, the Court of Auditors has adopted the gold concept in its recent OeNB examination. In its draft report it provides the OeNB diverse recommendations. One of the key points: Given the “risk of a high concentration at the Bank of England”, the examiner advises to “rapidly evaluate all possibilities of a better dispersion of the storage locations”. Not only the parties should be diversified, but also the “actual spread of storing among locations”.

The central bank has not ruled out such a relocation. The existing gold storage concept would be reviewed, potentially it will bring parts of the stored gold in the UK to Austria, OeNB experts have stated. Any changes will be decided upon security and economic criteria, according to the OeNB.

A brief orientation on the current gold concept: Austria has 280 tonnes of official gold reserves, only a small part of (17 %) is kept in Vienna. 80 % of the reserves are located in London, the most trading partner in gold, 3% percent is stored in Switzerland.

What more can we learn from the latest report from the Austrian Court of Auditors. Quite a lot, apparently the OeNB has been allocating gold and unwinding leases at a rapid pace since 2009. Have the Austrians been preparing repatriating a few years ago? Just like the Dutch? From the report February 24, 2015:

Currently all gold loans ran out no later than September 24, 2014.

In the report there is a table of all gold holding compositions from 2009 to 2013. Here’s my best translation: 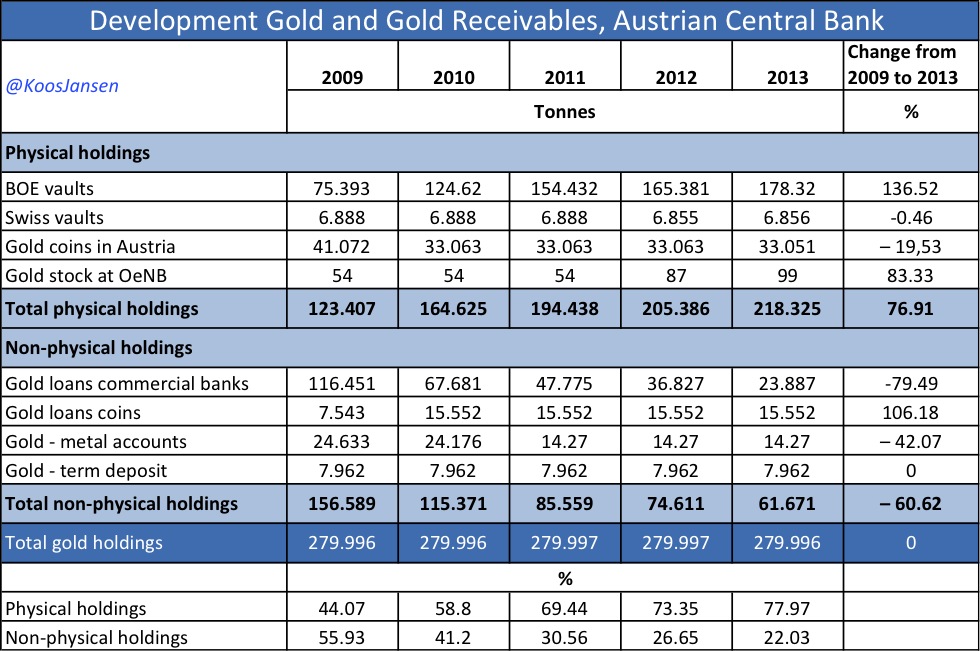 If I compare these numbers with previous research I did on the gold holdings of the Austrian central banks, the similarities are not hard to find. It seems the Austrian Court of Auditors has labeled unallocated gold as non-physical, which is probably the best way of putting it, as unallocated gold represent a claim on gold, though the holder does not own specified bullion. From the LBMA:

UNALLOCATED ACCOUNT An account where specific bars are not set aside and the customer has a general entitlement to the metal. … The holder is an unsecured creditor.

The next chart demonstrates the composition of Austrians allocated versus unallocated gold. We can see that by end 2013 unallocated gold accounted for 61.68 tonnes, the same as the total non-physical holdings in the chart above. This chart reaches to December 2014, when Austria only had 15.58 tonnes of unallocated gold versus 264.41 tonnes allocated – nearly fully allocated.

There is more information in the report that I don’t feel comfortable publishing as I haven’t discussed it with a native German speaker.

Austria’s allocation policy has been the main reason the Eurosystem’s total unallocated gold dropped to from 232 tonnes in 2013 to 183 tonnes by the end of 2014 (France and Malta also helped). 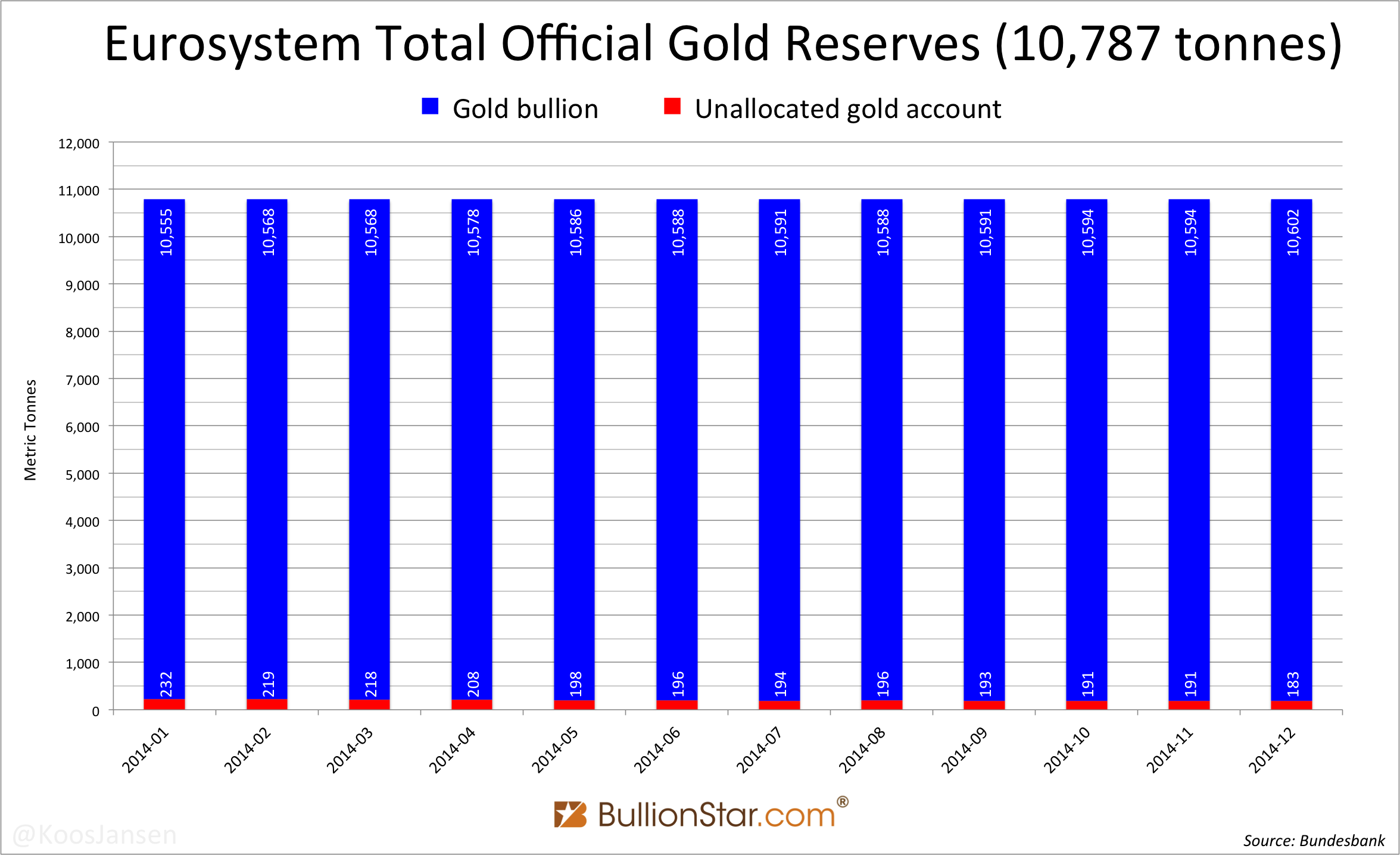 Reuters released an article on February 24, stating the Eurozone has increased its gold holdings by 7.437 tonnes to 10,791.885 tonnes in January 2015. I can’t verify this from the numbers I have. Perhaps it has got something to do with Lithuania joining the Eurosystem on January 1, 2015, though Lithuania holds only 5.8 tonnes (fully allocated). The article also notes Turkey has decreased its official holdings, though this is due to changes in Reserve Requirements commercial banks hold at the Turkish central bank (CBRT), not because the CBRT is trading on the open market – read this post for more details on the Turkish gold market. 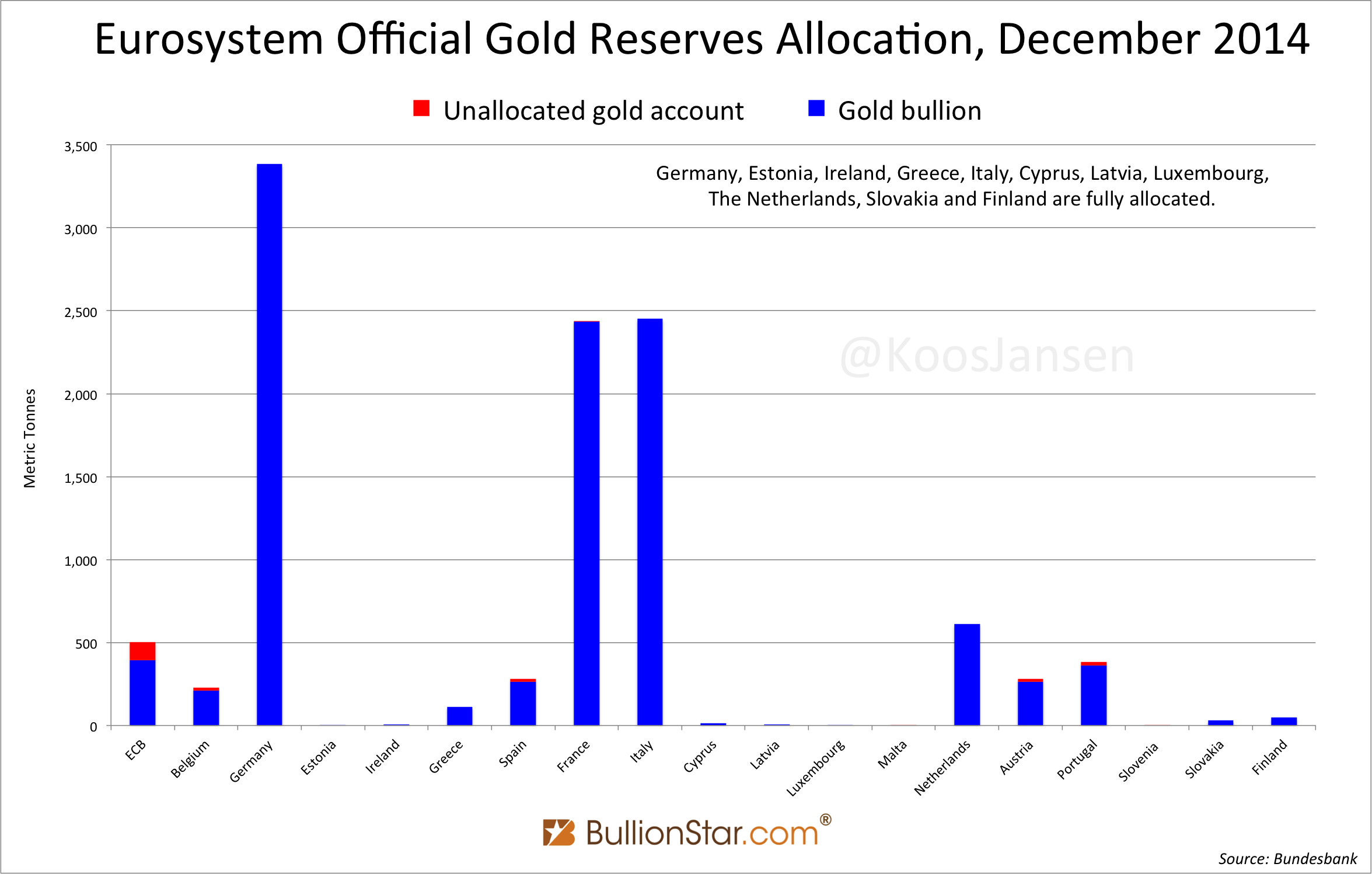