When Will China Disclose Its True Official Gold Reserves And How Much Is It?

Things are heating up in the Chinese gold market

First let’s go through the latest Shanghai Gold Exchange data and then we’ll continue to discuss the most recent developments regarding Chinese official gold reserves.

Friday the Shanghai Gold Exchange (SGE) released its trade report of week 11, 2015 (March 16 – 20). Withdrawals from the vaults, which equal Chinese wholesale demand, accounted for 53 tonnes, up 3.91 % from the prior week.

Year to date total withdrawals have reached a staggering 561 tonnes, up 7.3 % from 2014, up 33 % from 2013. When using the basic equation for the Chinese gold market to estimate import, we learn that up until March 20 China has net imported 412 tonnes. Add to this India has net imported about 230 tonnes over the same period, that’s 642 tonnes combined. I wonder how long the Chinese can keep up this pace of importing before physical supply from Western vaults runs dry. 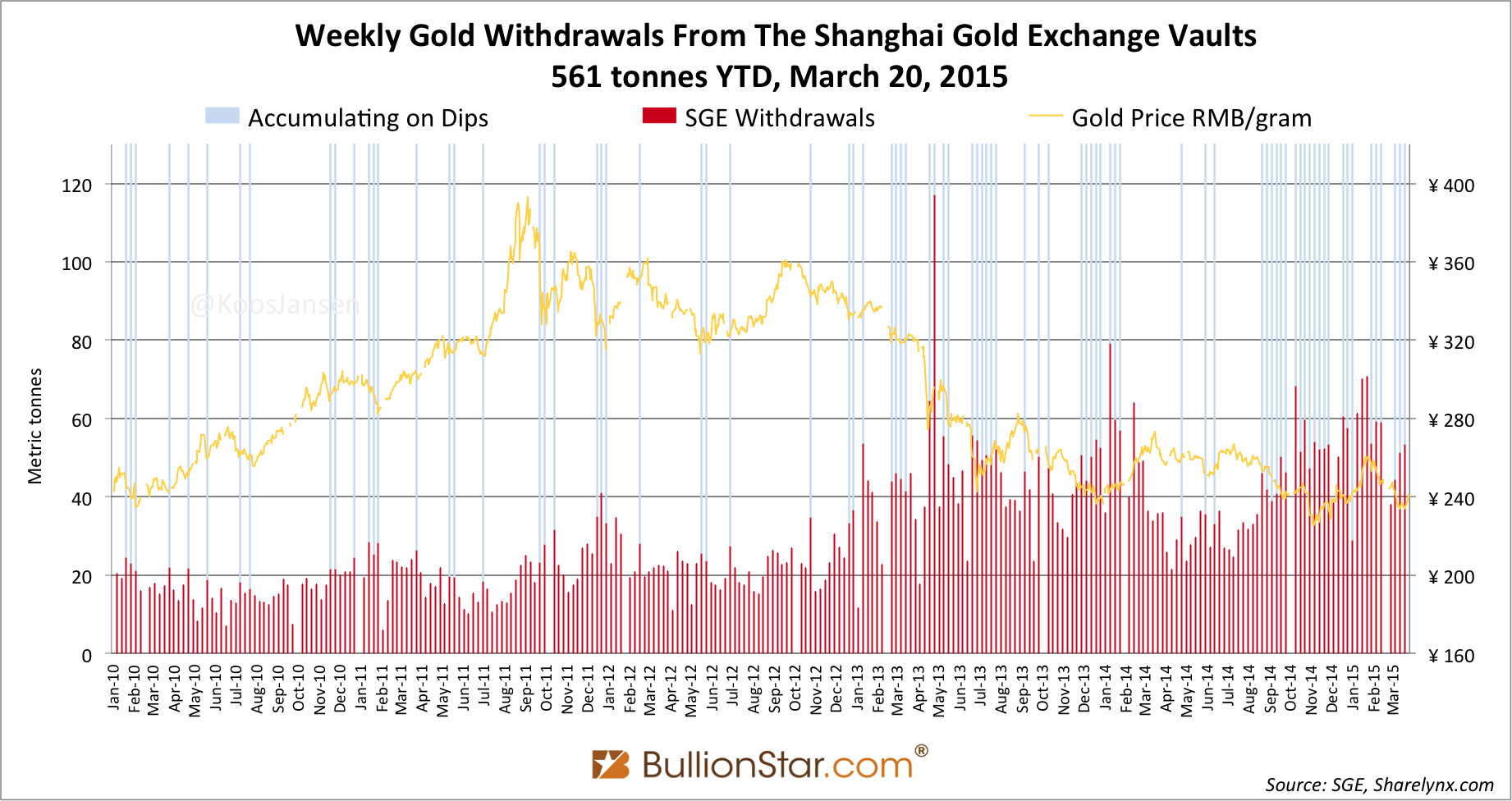 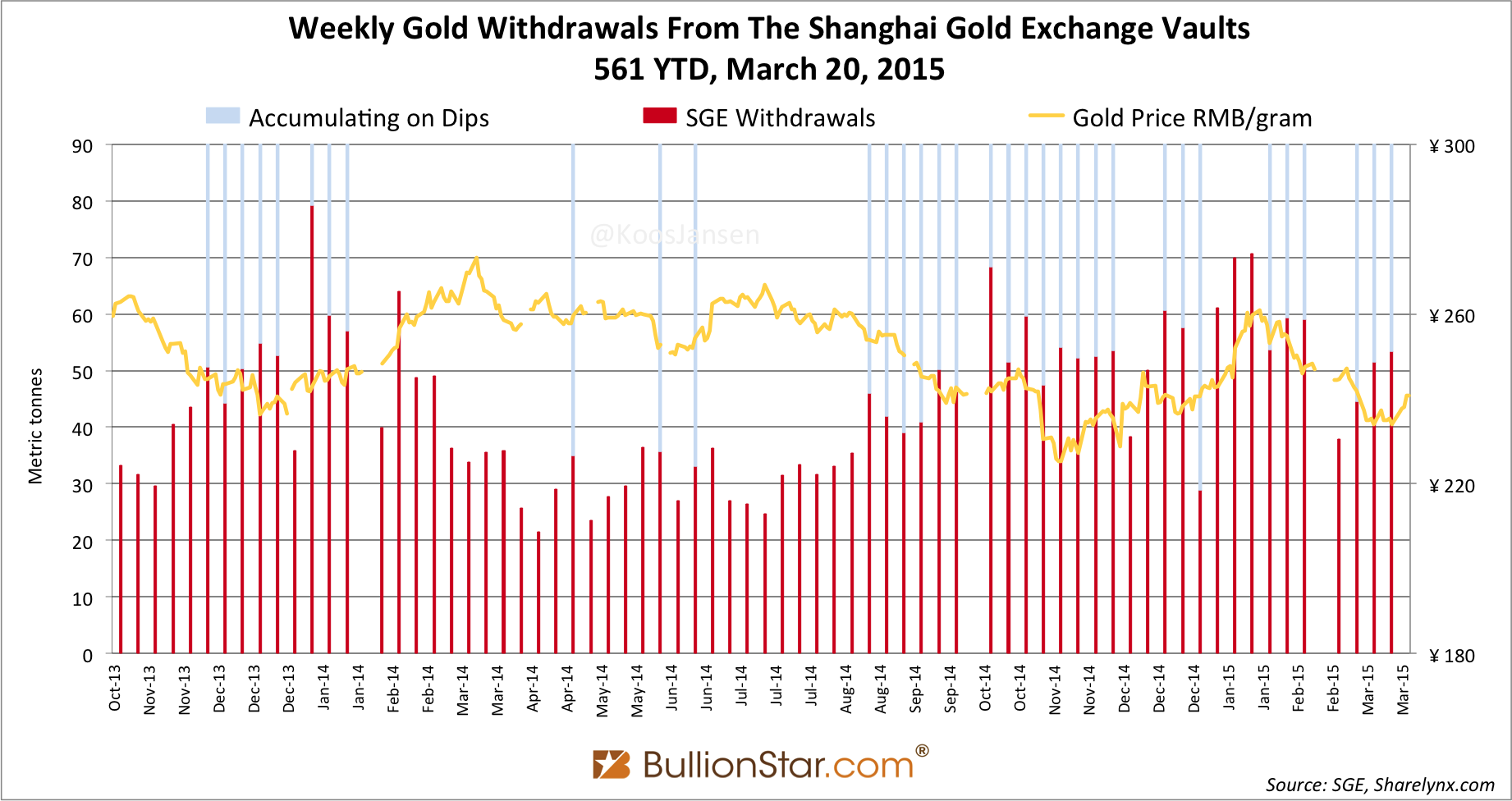 When Will China Disclose Its True Official Gold Reserves And How Much Is It?

As most readers who are interested in gold will know, China’s official gold reserves are small in proportion to the size of their economy and their foreign exchange reserves. This disproportionate position has been difficult for China to escape from. Any slight move from their immense stock of US dollars into gold could disrupt the gold market, and thus the US dollar, spoiling the party for everybody.

China is forced to buy in secret. The latest update on the size of their official gold pile was in April 2009, when they disclosed to have 1,054 tonnes, up 454 tonnes from 600 tonnes, which they claimed to have since 2003. Common sense indicates the PBOC did not buy 454 tonnes in a few months; most likely they bought this amount in secret spread over six years (2003 – 2009). More common sense suggests they continued to buy in secret since 2009 and they hold at least twice the weight they currently claim.

Last week I reported it’s very likely the renminbi will be adopted into the SDR basket this year and before inclusion China will announce their true gold reserves. All arrows point in the same direction, IMF chief Lagarde stated:

China’s yuan [renminbi] at some point would be incorporated in the International Monetary Fund’s Special Drawing Right (SDR) currency basket, IMF Managing Director Christine Lagarde said, …”It’s not a question of if, it’s a question of when,”

The SDR basket is reconsidered every five years, in 2010 there was no adjustment made, as the renminbi was not considered eligible at the time. But the renminbi has made significant developments since then; this year will be appropriate for adoption.

Next to what Lagarde and the IMF have stated, more “official” channels are hinting at changes to come regarding China in the international monetary system. Roland Wang, China managing director at World Gold Council, told Reuters on March 26:

“The ideal amount should be at least 5 percent of its total forex reserves," Wang told Reuters in an interview in Hong Kong.

If China would announce on Monday they hold 5 % of total reserves in gold, this would translate into roughly 5,000 tonnes.

Gold accounts for only 1.6 percent of China’s forex reserves. This is only a fraction of the figure in the United States and many other developed countries. If China ever increased the level to 5 percent, it would have an enormous impact on global demand for gold.

Li mentions the exact same numbers as Wang from the World Gold Council: 1.6 % and 5 % of total reserves. Coincidence?

I think that if China will update us on their gold reserves, the total will be less than 5,000 tonnes. For clarity, I have little hard evidence on the amount of gold the PBOC or its proxies hold in reserve. However, the reason I think it will be less is because of what Song Xin, Party Secretary and President of the China Gold Association, wrote at Sina Finance on July 30, 2014:

Gold Will Support Renminbi As It Moves To Join World

…For China, the strategic mission of gold lies in the support of RMB internationalization, and so let China become a world economic power and make sure that the “China Dream” is realized.

…Though China is already the world’s second largest economy, there is still a long way to go to become an economic powerhouse. The most critical part to this is that we don’t have enough say in matters such as international finance and matters regarding the monetary system, the most obvious of which is the fact that the RMB hasn’t fully internationalized.

Gold is a monetary asset that transcends national sovereignty, is very powerful to settle obligations when everything else fails, hence it’s exactly the basis of a currency moving up in the international arena. When the British Pound and the USD became international currencies, their gold reserve as a share of total world gold reserves was 50% and 60% respectively; when the Euro was introduced, the combined gold reserves of the member countries was more than 10,000 tonnes, more than the US had. If the RMB wants to achieve international status, it must have popular acceptance and a stable value. To this end, other than having assurance from the issuing nation, it is very important to have enough gold as the foundation, raising the ‘gold content’ of the RMB. Therefore, to China, the meaning and mission of gold is to support the RMB to become an internationally accepted currency and make China an economic powerhouse.

According to Song step one is to reach the 4,000 tonnes mark to surpass Germany and become the second largest holder in the world, which would be in line with being the second largest economy (in terms of GDP). We can also read China’s aspirations in international finance that is currently, among other deveopments, to be established through the inclusion in the SDR basket. Bear in mind, Song is a Party Secretary, he wrote his article with permission, or on behalf of the Communist Party of China (CPC).

To finish please read the last bit of the article from Caixin, a must read and it has similarities with Song’s article:

…Since the global financial crisis that started in 2008, there has been consensus that an excessive issuance of U.S. dollars, driven by the U.S. Federal Reserve’s need to protect the U.S. economy, was partially to blame for causing havoc. Since the Bretton Woods system collapsed in 1971, the United States has been freed from having to restrict its money supply to the size of the gold reserve its central bank holds.

What does that say about the attitude China should take toward gold?

The boom years for gold between 2008 and 2012 were, of course, driven to a large extent by the United States’ easy monetary policy and an economic recovery in many countries. Yet, China played a part in it as well.

Its push since 2010 to promote the use of the yuan globally and diversify its foreign exchange investment away from U.S. Treasury bonds and U.S. dollar-denominated assets has made investors expect the demand for gold to rise because the Chinese central bank will need a greater reserve to support its currency.

Gold accounts for only 1.6 percent of China’s forex reserves. This is only a fraction of the figure in the United States and many other developed countries. If China ever increased the level to 5 percent, it would have an enormous impact on global demand for gold.

The price of gold started plummeting in early 2013 as the U.S. economy became stronger and the market expected the Federal Reserve to stop its policy of so-called quantitative easing. Meanwhile, China’s demand for gold soared. In the first half of 2014, imports skyrocketed, prompting speculation that the central bank was secretly beefing up its gold reserve.

Buying more gold seems to be a good choice for both the government and individual investors, given the new domestic and international circumstances. The yuan has been relatively stable throughout the most troubled times of the financial crisis, but its peg to the U.S. dollar means it will always fluctuate in sync with the latter, depending on the Fed’s moves.

That is why it is extremely important that we have an “anchor" ourselves.

Gold is a currency that supersedes sovereignty issues, is politically neutral, and is not easily manipulated by monetary policy. Gold may not be able to compete with the currencies of the world’s major powers, but it can certainly be used as an anchor.

In the past year or two, enormous changes have occurred to the structure of China’s economic growth, to the degree of social wealth accumulation, and to the investment and wealth management habits of ordinary people. It is important and urgent that we revisit certain issues, including the relationship between the yuan and gold, under these new circumstances.

The party came to power not only because it won the war but also, and more importantly, because it represented the right thing to do economically and financially. The relative advantages of its monetary system back then have been fully demonstrated, but it will not be long before they turn into obstacles to progress if the authorities reject reform and refuse to evolve along changing times.

The emphasis on material goods over gold and silver in the yuan system may have been superior in wartime and when supplies were insufficient, but it has increasingly become incompatible with today’s needs.

If it was necessary to use all means necessary to secure enough supplies of goods in the old days, today’s priority should be how to fairly distribute them. The emphasis should be on developing a fair market and protecting the ownership of private assets.

In a 1966 essay, former Fed chairman Alan Greenspan wrote that gold is “a protector of property rights." This is true, but only in times of peace and in an open environment. The old wisdom of hoarding gold in troubled times is applicable only to eras of strife and war. In China in the 1960s, in Nazi-controlled Europe and in the Soviet Union under Stalin, gold could not buy one food, let alone protect property.

So instead of trying to peg the yuan somehow to gold to increase its credibility internationally, the government might as well work to establish rule of law and create a system where private property ownership is respected and the public believes in the strength of the monetary system. Confidence is more important than gold.

But that does not mean the yuan system does not need gold. It can be an anchor that stabilizes the yuan and increases people’s confidence in it. It can also serve as a check to the power of any one major currency.

Increasing private savings and investments of gold, or – as the Chinese government likes to call it – “storing gold with the people," is not only about the diversification of investment channels. It is also an inevitable path that the yuan must take from being a currency supported by reserves of material goods to one based more on credit.

The government should be pleased to see this trend gaining momentum. Increasing its gold reserves at the same time can also strengthen the public’s confidence in the yuan and promote its use globally.