According to the most recent data from Eurostat the UK has net exported 37.6 tonnes of gold to China in September, an all-time record. This figure is up 25 % m/m and up 280 % y/y.

The UK started exporting gold directly to China in April 2014 when it shipped 5 tonnes to the mainland while for the first time bypassing Switzerland and Hong Kong. In total the UK net exported 114 tonnes to China in 2014. Year to date the UK has already net exported 210 tonnes of gold to China, annualized a whopping 280 tonnes – which would be 146 % more than last year. The exodus of gold from the West to the East is still in full swing. 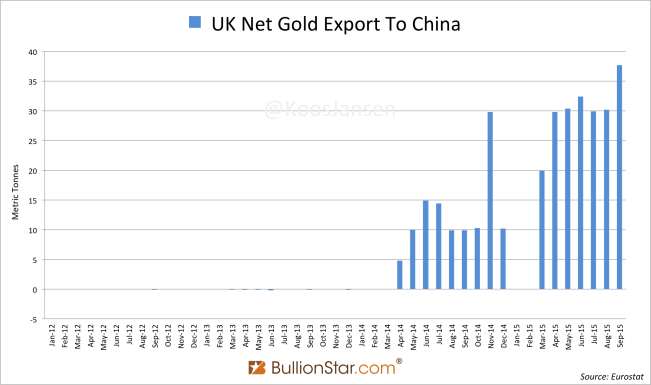 Net export from the UK to Switzerland in September accounted for 44 tonnes, which is 45 % less than in August. Year to date the UK has net exported 417 tonnes of gold to Switzerland, down 0.3 % from 2014 and down 62 % from 2013 – all due to direct gold export to China instead of transshipping it through Switzerland for refining.

Overall the UK was a net exporter in September at 47 tonnes, which is 64 tonnes less than in August. Year to date the UK has net exported 334 tonnes in total – it has also imported gold, explaining total net export can be lower than what was net exported to China and Switzerland.

One of the greatest gold hoards on earth is located in London. The capitol of the UK has been the epicenter of the global wholesale gold market for centuries, hence many bullion banks and central banks have their physical gold stored within the M25 London ring way. It was estimated by a team of gold researchers (Ronan Manly & Nick Laird) that in early June 2015 approximately 6,256 tonnes of gold were stored in London. The composition of these holdings at the time was:

Because central banks were (are) not likely to sell their gold in significant quantities, what was potentially available for sale is the residual at the BOE (1,355 tonnes), the ETF gold (1,116 tonnes) and the residual outside the BOE and the ETFs (6 tonnes). Totalling at 2,477 tonnes, of which 1,116 tonnes is in ETFs and 1,361 tonnes in unknown holdings.

By tracking gold export from the UK we can grasp what is happening to these stocks of gold in London. From 1 June until 30 September 2015 the UK net exported 181 tonnes in total, and GLD (the largest ETF in London) lost 27 tonnes over this period. Consequently, total ETF stocks must have declined to roughly 1,089 on 30 September, and unknown holdings in London down to 1,207 tonnes.

Here at BullionStar we have been writing withdrawals from the vaults of the Shanghai Gold Exchange (SGE), which equal Chinese wholesale gold demand, have been explosive in recent months. After the Chinese stock market plunged in June SGE withdrawals made an exceptional run up for the time of year. But, as SGE withdrawals skyrocketed we had to wait for foreign trade statistics to learn what the ratio was between recycled gold and import supplying the SGE (domestic mining supply being fairly constant), to get the best overall view on Chinese gold demand. High exports from the UK to China confirm Chinese demand has indeed been very strong this year. Although, it can still be there is more recycled gold flowing through the SGE relative to withdrawals than in previous years, because withdrawals are so exceptionally high this year.

Remember when in 2013 the gold price went down sharply and Chinese gold demand exploded? Back then Hong Kong net gold exports to China were dominating the headlines as these were thought to be the main indicator for gold going into China mainland. At the time China was importing large amounts of gold through this route, sometimes above 130 tonnes a month. More than a year later the Swiss customs department opened its gold cross-border trade book by deciding to publish gold trade statistics country specific. When we added these numbers to Hong Kong trade statistics we learned Chinese gold import had been (occasionally) more than 160 tonnes a month in 2013. Currently, we’re back at those levels. Aggregated net gold export from Hong Kong, Switzerland and the UK to China was 156 tonnes in September, which excludes gold export from Australia. The most recent data from Australia is from July and shows they have net exported 13 tonnes of gold directly to China (a record). SGE withdrawals were strong in July, but they were strong in August and September as well. I would not be surprised if Australia has exported over 10 tonnes of gold directly to China in August and September. If that appears to be true in the coming months China is importing at a tune of 166 tonnes a month. Let’s have a look at some charts. 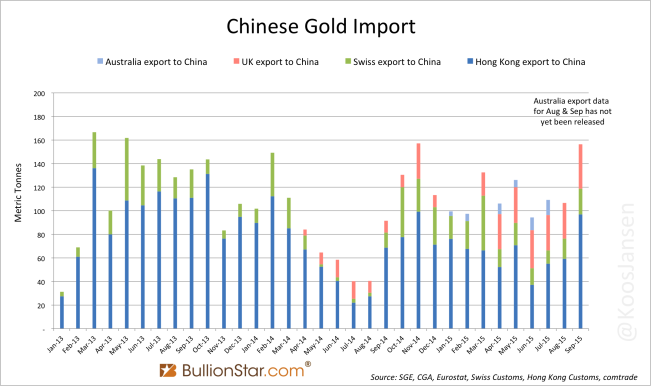 In the chart above Australia’s gold export to China is not included for August and September, yet total Chinese gold import (derived from the countries of which I have access to the export data) has already reached 156 tonnes in September 2015.

In the chart below we can see strong SGE withdrawals from June until September have depleted the SGE vaults, which are being replenished by gold imports. 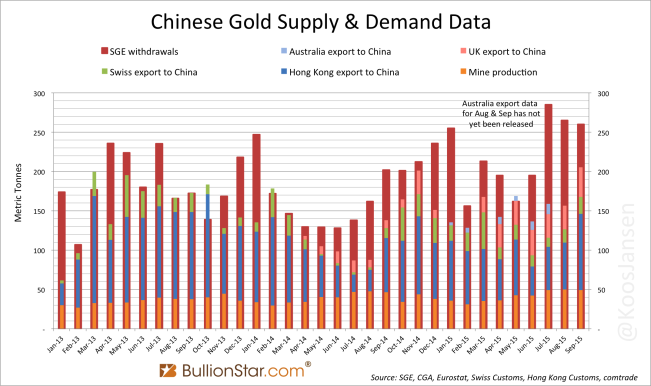 Yes, it’s safe to say Chinese gold demand is very strong in 2015. We will compare these numbers with Chinese consumer gold demand as disclosed by the World Gold Council in a forthcoming post.