The Chairman of the China Gold Association and General Manager and Party Committee Secretary of China National Gold Group Corporation, the latter being China’s largest gold mining enterprise, is Song Xin and happens to be one of my favorite commentators in China. This gentleman made waves in July 2014 when he candidly wrote on Sina Finance that the People’ Bank Of China (PBOC) should slowly raise its official gold reserves to 8,500 tonnes, more than what the US Treasury claims to hold. The article was published in Chinese but translated by BullionStar to share the views by Song Xin with the English speaking world:

For China, gold’s strategic mission lies in the support of renminbi internationalization, and so let China become a world economic power and make sure that the China Dream is realized. … gold forms the very material basis for modern fiat currencies.

In the next translation further below you will read more on how Song Xin views gold’s role in China’s financial strategy. The bullet points from the article:

What he didn’t mention is that China is striving to boost gold trade along OBOR to be settled in renminbi through the Shanghai International Gold Exchange.

Is The SDR A Means Or And End For China?

In the mainstream media we often read China wants the SDR to replace the US dollar as the world reserve currency, based on statements from PBOC Governor Zhou Xiaochuan – among others:

Special consideration should be given to giving the SDR a greater role. The SDR has the features and potential to act as a super-sovereign reserve currency.

Since 2009 China has vigorously pressured the IMF for renminbi inclusion into the SDR. Finally, in 2015 the IMF decided the renminbi would be added to its currency basket in October 2016.

Zhou and other prominent economists at the PBOC are clearly pushing the SDR, but what’s China’s exact strategy?

In advance of the official inclusion of the renminbi into the SDR, which will take place on October 1, 2016, developments regarding the International Monetary Fund’s synthetic reserve currency are unfolding rapidly.

Author of the Big Reset, Willem Middelkoop, reported this August a “Substitution Fund” is being discussed in the higher echelons of the monetary elites, to facilitate dollar exchange for SDRs outside the market, and thus creating an escape from dollar reserves without putting downward pressure on the dollar.

Also in August, The PBOC allowed a division of the World Bank (the IBRD) to issue bonds denominated in SDRs in the Chinese market. The bonds worth $2.79 billion dollars can be created “soon” – presumably within a month. In addition, the Chinese government-linked China Development Bank will issue SDR notes worth somewhere in between $300 million to $800 million dollars. Both issues are “SDR-denominated financial market instruments” called M-SDRs by the IMF. Though experts think the M-SDRs will encounter many practical challenges when implemented and demand will be tepid, nevertheless the intention by the PBOC to launch these instruments is clear.

On the surface we can observe China has a vast interest in the SDR, but is the SDR a means or an end for China? What if China is simply using the SDR as a vehicle to achieve other objectives? For example:

I think for China the SDR is just a means to an end. The end being to internationalize the renminbi, which of course is connected to the dollars retreat. And as Song Xin clearly states, “gold forms the very material basis for modern fiat currencies” and, “gold reserves should become the cornerstone … for renminbi internationalization”.

In my humble opinion the financial crisis has shown (once again) the inherent flaws of all fiat currencies. A bundle of some of these currencies will not solve the problems ahead of us; at best provide tools or a next level printing press. I still prefer gold as a store of value.

I find it interesting that Song Xin mentions the importance of the ratio between China’s official gold reserves and GDP. This concept was also brought forward by Jim Rickards. If the PBOC would have 5,000 tonnes of official gold reserves their “gold to GDP ratio” would be roughly on par with to the US, Europe and Russia.  One of the theories about our current international monetary system – that was detached from gold in 1971 – is that it can shift to a new gold anchored system when the power blocks have equalized the chips (Jim Rickards). In other words, if the US, Europe, Russia and China all have a roughly equal ratio of official gold reserves to their GDP, the international monetary system could make a transition towards gold. 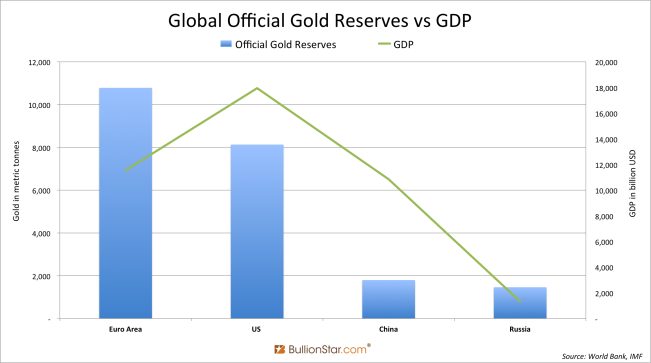 According to my estimates the PBOC has roughly 4,000 tonnes in official gold reserves, in contrast to what is publicly disclosed at 1,800 tonnes. Perhaps the PBOC is “nearly there".

Song Xin who was also a speaker at the “Renminbi Internationalization and China’s Gold Strategy Seminar” in Beijing on 18 September 2015.

Original source of the article below is the China Gold Association website. [Brackets added by Koos Jansen]

As the sole central enterprise in the gold industry, China National Gold Group Corporation is a firm defender of renminbi internationalization, pioneering demonstrator of the country’s “One Belt and One Road”, and faithful guardian of a happy life for people. It’s the direction that we should strive for.

On March 10 during the two assemblies, Song Xin, Chairman of the China Gold Association, General Manager and Party Committee Secretary of the China National Gold Group Corporation, was the guest in Xinhuanet’s 2016 two assemblies special Interview. In the program Dialogue with New State-owned Enterprises and Cheer up in the “13th Five-Year Plan”, he proposed the conclusions above. Besides, in the in-depth dialogue, Song Xin systematically illustrated topics including the functions of renminbi internationalization, effectively enhancing gold supply, realizing improved quality and efficiency of enterprises, practicing the central party’s “Five Development Theories”, and fulfilling the responsibilities of central enterprises.

When the credit lines of paper currency declines and there are enough gold reserves, people can be less worried about the existing credit system and enhance their confidence in the currency.

Song Xin pointed out that the renminbi is closely related to gold. Gold is priced in US dollars throughout the world and in renminbi in China. There is a special relation between the renminbi and gold. We have continuously increased gold reserves since China strove to join the SDR basket of currencies. By the end of February this year, our gold reserves have increased to 1788.45 tonnes. In other words, China has continuously increased its official gold reserves and publicized the amount to the world, keeping a close relation with renminbi internationalization and joining the SDR. 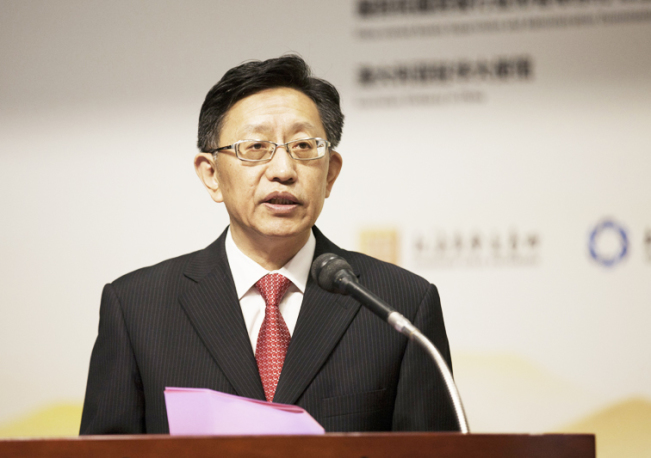 China’s existing gold reserves are only about 1/5 of America’s. With the acceleration of renminbi internationalization, the renminbi should further increase its gold reserves in order to reach a level matching the national economic aggregate [GDP], especially if the renminbi wants to become a global currency.

Song Xin mentioned that China’s gold reserves once maintained around 1,054 tons. In the second half of last year, it started to increase these reserves substantially. Now, it has been increased by 70%. The increase range is big, but small compared to that of developed countries. At present, our economic aggregate [GDP] reaches second place in the world, but our gold reserves only reach the sixth place in the world. If the IMF’s reserves are excluded, China’s reserves rank in fifth place according to national rankings.

Possessing sufficient gold can strengthen confidence in a currency

Song Xin believes that it has a relation with the global governing system. When the global economic aggregate was not so big, the gold standard had a certain advantage. With the expansion of the economic aggregate, the Bretton Woods system was disintegrated, and gold was disconnected from the US dollar. America announced that gold was unimportant then under this circumstance. However, in fact, when a financial crisis happens in America, its gold reserves don’t reduce at all. Americans firmed up people’s confidence in the US dollar by sufficient gold reserves.

Talk about supply reform: increase the effective supply of gold to boost quality and efficiency of enterprises rather than excess capacity, the gold industry needs to increase supply

Regarding how to increase the effective supply of gold, Song Xin believes that enterprises in the gold industry should offer more suitable marketing paths, especially customers’ favorite gold jewelries and gold investments with cultural connotation and innovation.

“The political responsibility of the China National Gold Group Corporation is to make enterprises strong, excellent and big. Besides that, it is also to allow staff to enjoy the achievement of enterprise development. More importantly, it is to increase the effective supply of gold, to satisfy the demands of people and country for gold products, and to maintain the healthy and harmonious development of the industry”, said Song Xin.

Song Xin introduced that gold played a very important role in different historical periods. In the revolutionary war period, the underground party delivered abundant gold to Yan’an from the Jiaodong base area in order to get medicine and materials, playing a positive role for the Communist Party to gain victory. In the beginning of reform and opening up, the country’s foreign exchange was in a shortage and our country vigorously increased gold productivity, once amounting to 70% of the whole country’s foreign exchange reserve which is mainly for gold swap transactions and purchasing devices, etc. and guaranteeing foreign exchange demand of economic development. In the new era, gold has played an important role in resisting economic risk, maintaining the country’s financial safety and assisting with renminbi internationalization.

Song Xin thinks that the China National Gold Group Corporation shoulders the important mission of increasing gold reserves and production and adding trust for renminbi internationalization for the country. He said, “Gold reserves should become the cornerstone or ballasting stone for renminbi internationalization, which can improve the gold content of renminbi. In these aspects, the China National Gold Group Corporation is obligated to fulfill its own political duty.” Make achievement in the “One Belt and One Road”