Welcome back to my weekly post on the Chinese gold market, usually centered around data regarding Shanghai Gold Exchange (SGE) withdrawals from the vaults. I’ve been away for a short while because I had some health issues – I’ll be fine, I just need a little time. The good news is I slowly started working a few days ago! Let’s see what I didn’t cover in recent weeks in terms of SGE withdrawals, trading volume and Chinese gold imports. I’ll try to catch up in a few post that cover important developments.

SGE withdrawals from May 4 until May 8 (week 18) accounted for 37 metric tonnes. As a rule of thumb this amount of gold is equal to Chinese wholesale gold demand – read this post for a comprehensive analysis of the mechanics of the Chinese gold market and all metrics used to measure demand. Year to date an incredible 858 tonnes has been withdrawn from SGE designated vaults, up 9 % y/y from 2013, up 19 % y/y from 2014. 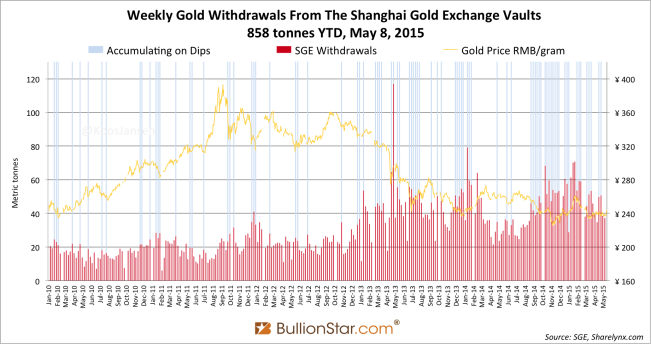 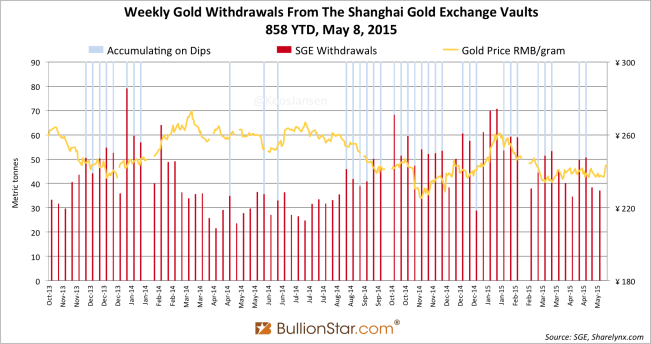 To get a better grip on SGE withdrawals let’s have a look at trading volume on the Shanghai International Gold Exchange (SGEI), as this can distort Chinese wholesale gold demand measured by SGE withdrawals – read this post for an analysis on SGEI volume in relation the SGE withdrawals. 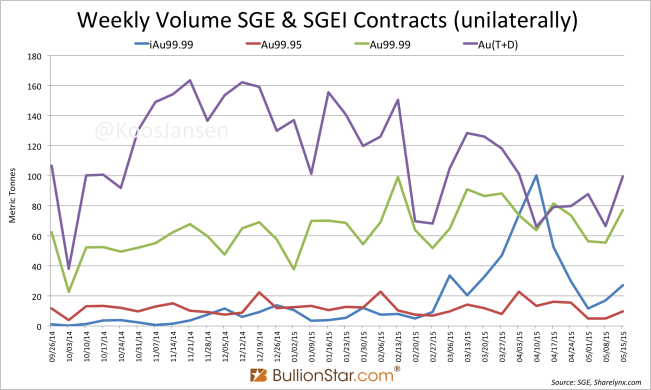 We learned on April 11, trading volume of the most popular contract on the SGEI (iAu99.99) transcended all other SGE contracts. However, this appeared not to be sustainable in the succeeding weeks; SGEI volume dropped to low levels. I would say the potential impact of SGEI volume on SGE withdrawals is limited at this stage.

Capturing Chinese wholesale gold demand and mainland import derived from SGE withdrawals for Q1 2015 gives, roughly, 600 tonnes and 400 tonnes, which are both conservative. Total withdrawals in Q1 were 625 tonnes, but let’s assume some of this was exported through the SGEI – read this post for an analysis on the workings of the Shanghai International Gold Exchange.

According to the China Gold Association domestic mine output was 111 tonnes in Q1. If we use the basic equation (SGE withdrawals = mine + scrap + import) to subtract 111 (mine) and 89 (scrap) from withdrawals (600), this leaves 400 tonnes (import).

Record Q1 SGE withdrawals and strong import numbers are very significant data points for the gold industry (if not the global financial system). Did the World Gold Council publish anything about extraordinary Chinese gold demand? Nope. To get a more clear view on Chinese gold demand, I have collected gold export data from three major gold hubs; Hong Kong, the UK and Switzerland. Hong Kong has net exported 210 tonnes of gold to China mainland in January – March 2015. The UK has exported 20 tonnes directly to China in Q1. 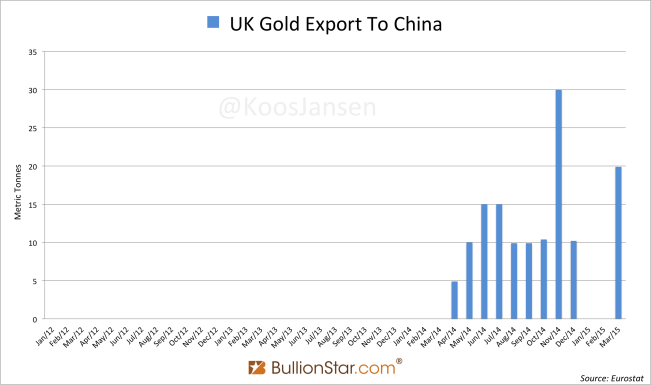 The UK’s direct export to China YTD is not a shocking amount, though, most gold in China is still supplied by the UK – home of the London Bullion Market. In the next chart we can see UK total net gold trade and UK net gold trade with Switzerland versus SGE withdrawals. It’s not hard to see the correlation between demand in China (SGE withdrawals) and net export from the UK, which is send through Switzerland and Hong Kong to China mainland. So, just three countries have exported 320 tonnes to China in three months. Chinese gold import added by mine supply (111 tonnes) and a little scrap easily exceeds 460 tonnes. So, 460 tonnes is the minimum of Q1 total supply for China, yet, demand as disclosed by the World Gold Council (WGC) was 273 tonnes; the mystery continues.

From what I’m seeing Chinese gold demand in Q1 was 500-600 tonnes, though the WGC wants us to believe it’s only slightly more than half of this (273 tonnes). The gap, as I’ve previously called it, has mushroomed to over 3,000 tonnes of gold in total since 2009!

Technically, the only way the gap between SGE withdrawals and import – from Hong Kong, the UK and Switzerland – and WGC demand can be filled is by scrap supply or additional imports. However, in my opinion scrap (/recycled gold) couldn’t have supplied the SGE to such an extent, which leaves the question; what country is supplying vast amounts of gold to China? 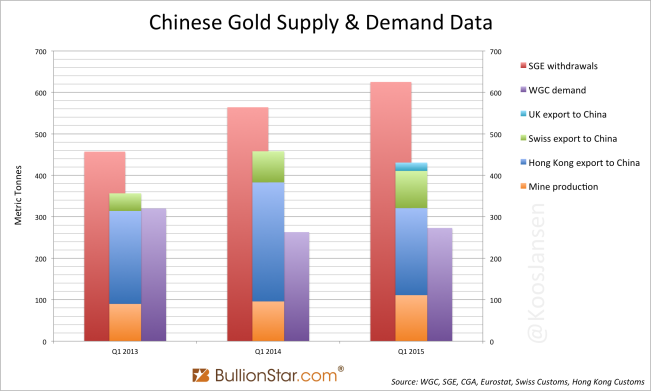 That’s it for now. In upcoming posts we’ll continue to analyze international gold trade and the gap between WGC demand and SGE withdrawals.