The latest numbers from the Shanghai Gold Exchange (SGE) demonstrate a little over 59 tonnes have been withdrawn from the vaults in week 6 of 2015, down 0.35 % w/w. SGE withdrawals, which are often used as a proxy for Chinese wholesale gold demand, account for an amazing 374 tonnes year to date, up 17 % y/y.

Corrected by the volume traded on the Shanghai International Gold Exchange (SGEI), withdrawals in week 6 were at least 51 tonnes (read this post for a comprehensive explanation of the relationship between SGEI trading volume and withdrawals). Year to date withdrawals corrected by SGEI volume were at least 333 tonnes.

I can’t proof it at this stage, but I think domestic withdrawals are more likely to be 374 tonnes year to date than 333 tonnes. The Chinese import huge amounts of gold which obviously is not going through the SGEI. In addition, it seems unlikely every trade on the SGEI is withdrawn from the vaults in the Shanghai Free Trade Zone to be exported. The SGEI is not yet the place to buy gold. 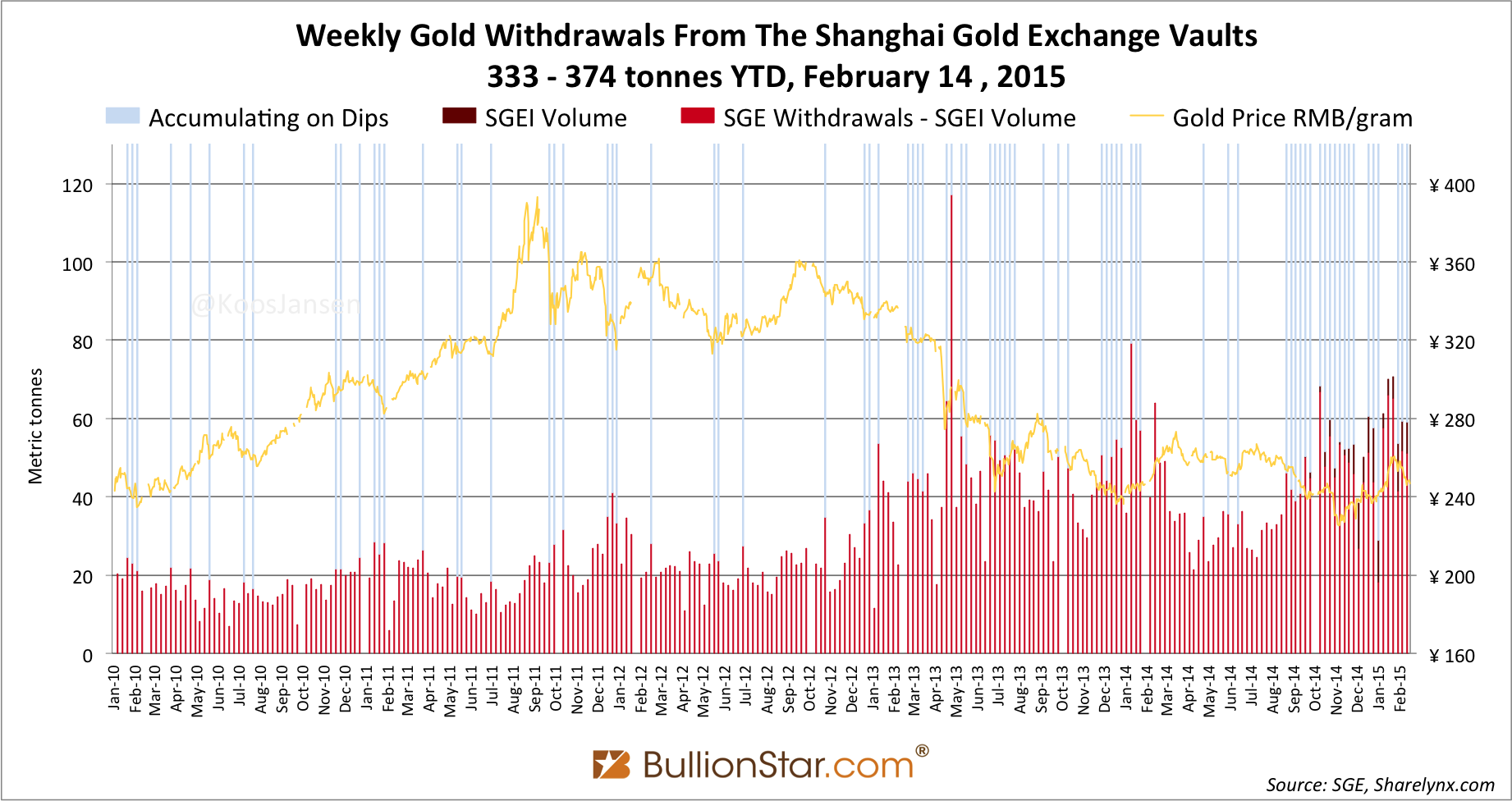 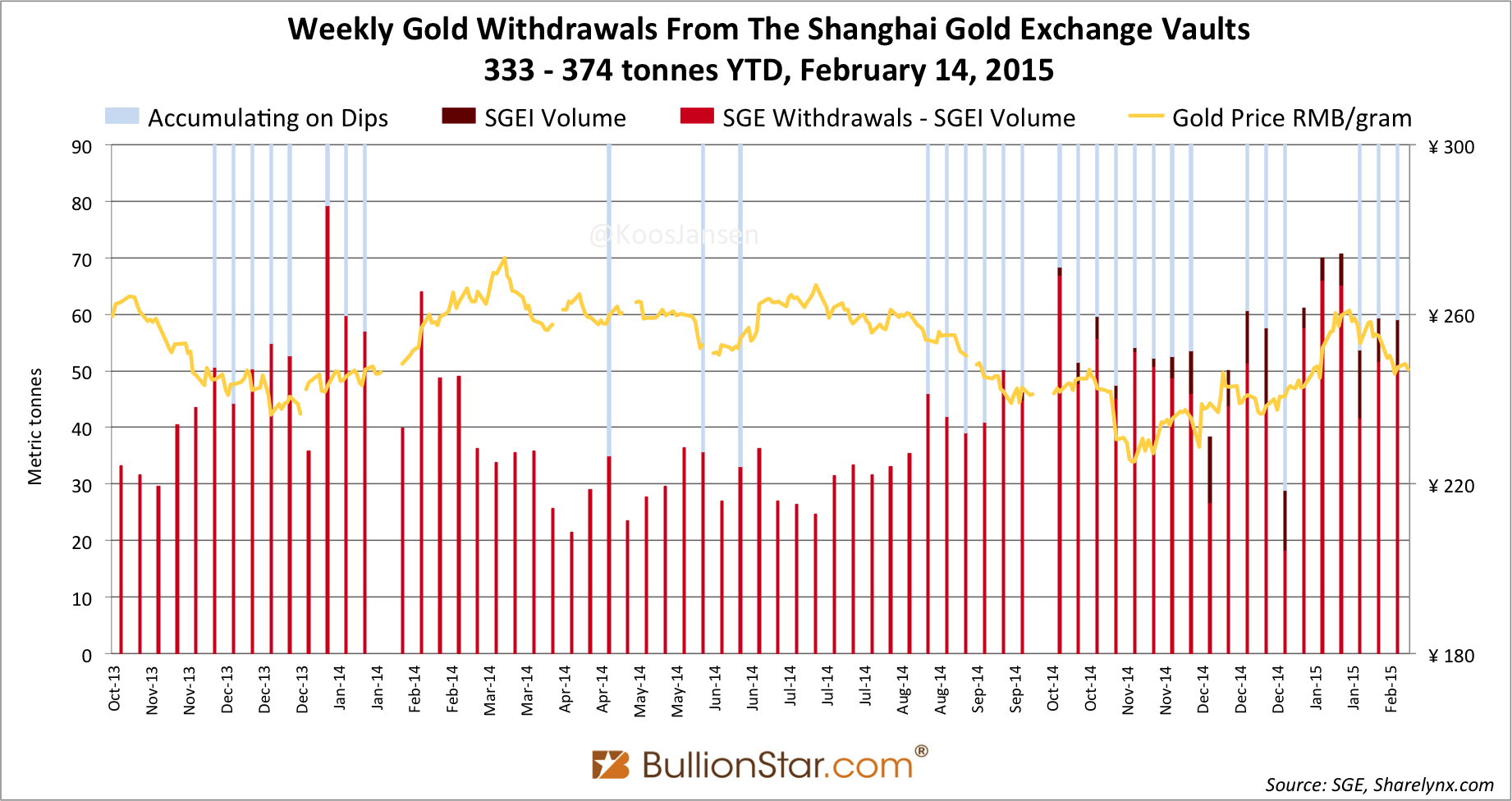 According to my estimates China has imported 280 tonnes year to date (until February 13).

Here’s some more perspective; SGE withdrawals year to date are definitely not less than last year when we experienced how Chinese people can storm their local malls on a mission to buy as much gold as they can (perhaps that’s why this year lifeguards were on the scene to control the shoppers).

Yes, demand has been huge in China, but not according to the price of gold. Technically speaking it doesn’t matter how much gold is bought to qualify demand, if supply is outstripping demand the price will go in one direction only, down. Officially, by tracking the price this should tell us everything about supply and demand of gold. A declining price means supply transcends demand, until a new price equilibrium is found, and vice versa.

If the price of gold is determined by physical supply and demand of gold we are supposed to believe that since April 2013 (see chart 1) there has been far more supply than demand as the price has come down substantially. Supposedly there has been so much supply, that Swiss refiners expanded their plants and worked in three shifts 24 hours a day to refine all this gold, which they fortunately could dump in China. The decline in the price was an enormous flood of supply and feeble demand!

Perhaps you can read my cynicism between the lines, as in my opinion there is more going on than the official story; for example, all leading Western consultancy firms have underreported 2013 and 2014 Chinese gold demand in both years by roughly 1,000 tonnes. As I have written a few hundred times on these pages: why the mainstream media isn’t covering this remains a mystery.

Just explained my brother 1,000t of gold are missing each year in China. He asked me why the FT wasn’t writing on this. Couldn’t answer him

Most of the big potatoes in the gold realm sort of deny the amount of gold China is accumulating or present inaccurate arguments to defend their understated demand numbers.

Harvey: The period in the run-up to the Lunar New Year is considered a peak season for gold demand in China. From what you have seen, how has buying been this year, compared to last year and the year before?

Klapwijk: In terms of the YoY, my sense is that 2015 is up moderately on 2014 but well below the exceptional demand seen in the same period in 2013.

Harvey: What sort of consumer trends have been noticeable this year – what sort of products are people favoring, and is gold buying overall as widespread as it has been in the past?

Klapwijk: This is partly a price and timing related phenomenon but also I think speaks to – by Chinese standards – a somewhat ‘soft’ environment for retails sales of jeweler this New Year.

I wrote a lengthy piece a couple of days ago stating retail sales do not make up the majority of gold sales in China.

Harvey: Do you consider withdrawals from the Shanghai Gold Exchange to be a useful measure of demand?

Klapwijk: The withdrawals show what the big picture is for physical “demand". They are not per se an indication of the total demand for jeweler, investment products or industry.

This is because a good part of the withdrawals represent gold that is used purely for financing and other end-uses that are not equivalent to real consumption.

Wagner: Is financing with Gold a big deal in China?

Klapwijk: Therefore relying on SGE withdrawals to measure the size of and change in true demand is highly misleading. For example, withdrawals in 2013 came to 2,197t and in 2014 to 2,102t. This both overstates the true size of demand and, of course, completely understates the drop in jewelry and especially bar demand last year.

Yes, the difference is mainly the use of gold for financing.

Harvey: How has that side of the market developed over the last few years? Is it still a growing area of business?

Klapwijk: The use of gold for financing… a kind of “gold carry trade"….has developed tremendously in recent years. Essentially borrowers in the shadow banking milieu are taking advantage of the availability of gold at comparatively very low rates of interest compared to straight forward RMB loans.

An indication of this is that at end 2013 the SGE reported gold loans by members totaled over 1,100 tonnes. My understanding is that number will have grown quite a bit in 2014.

There it is again, the amount of gold tied up in financing deals (CCFD’s) used as an argument to explain elevated SGE withdrawals. In my latest in-depth article on the Chinese gold market I expanded on why this can’t be the explanation as these deals only show up as SGE withdrawals if used for genuine gold business; jewelers leasing gold for production.

In a report the World Gold Council (WGC) released April 2014, China’s gold market: progress and prospects, it was stated:

… No statistics are available on the outstanding amount of gold tied up in financial operations linked to shadow banking but Precious Metals Insights believes it is feasible that by the end of 2013 this could have reached a cumulative 1,000t…

Right, so we’re talking about the same gold, 1,000 tonnes has grown into 1,100 tonnes, but now the source of this number (Precious Metals Insights, Phillip Klapwijk, February 17, 2015) says this is simply the amount leased at the SGE (not disclosing what is withdrawn or not). When I emailed the WGC in 2014 to ask what kind of “financial operations” the 1,000 tonnes actually were, they replied:

Here the WGC admits leased gold that is withdrawn from the SGE vaults is used for genuine gold businesses and only a small part of total leases is used in shadow banking! I rest my case.