Last week the Shanghai Gold Exchange (SGE) launched a new English website to offer international customers more information and tools on trading gold in renminbi through its subsidiary in the Shanghai Free Trade Zone the Shanghai International Gold Exchange (SGEI). BullionStar took the opportunity to translate a speech by a Teng Wei, Deputy General Manager of the SGEI, named “How China’s Gold Market Can Help The RMB Achieve International Status” that was held at the Renminbi World summit in Beijing on the 29th and 30th of November 2016. In the speech Teng Wei outlined his vision for the SGEI going forward regarding renmibi (RMB) internationalization, connecting the onshore and offshore renminbi market and increasing gold market share.

1) In the financial blogosphere the general perception is that the SGEI has been a failure since it was launched in September 2014. This analysis is based on the assumption that the trading volume of the most popular SGEI contract (1 Kg 9999 – iAu99.99) has been tepid for two years now. But this analysis neglects two important elements. 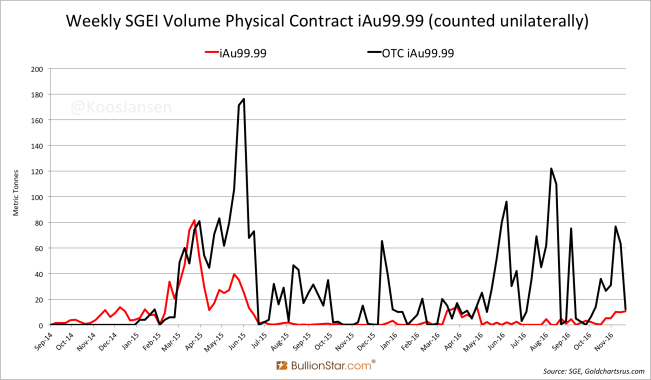 When observing total trading of all SGE(I) gold contracts, there is a clear rise in volume since the SGEI was launched. Up till now international customers are mainly trading SGE contracts. The significant rise in trading volume of all SGE(I) contracts since September 2014 is due to the inception of the International Board (SGEI). In the second week of November 806 tonnes was traded on the SGE(I), the highest amount ever.

So the launch of the SGEI has not been a failure in my opinion – it has elevated gold trading in (offshore) renminbi.

For more information please read my post The Workings Of The Shanghai International Gold Exchange or have a look at the graph below.

The 2016 RMB summit was held in Beijing on the 29th and 30th of November. Deputy General Manager of the Shanghai International Gold Exchange Center Teng Wei participated in the forum and discussion on “How China’s Gold Market Can Help the RMB Achieve International Status”. He expressed that using Shanghai’s free trade zone status, investors can open trading accounts denominated in RMB and participate in trading directly through the Exchange’s international board [SGEI] that allows access to most of the precious metal products that are traded in China. The international board has developed relatively well since establishment with active participation from international members and steadily increasing trading volume.

Gold on the international board is quoted and settled in RMB, which effectively connects the RMB onshore market and offshore market. This will extend the scope of RMB usage across borders and provide a new channel for inward capital flows. It is a move that is beneficial to expand the RMB usage to steadily promote internationalization of the RMB.

Ladies and gentlemen, good afternoon, I am Teng Wei from the Shanghai International Gold Exchange. I am delighted to participate in this forum organized by the Asian Bankers Association to have a chance to speak and interact with everyone about opening China’s gold market to the world and how that can help the internationalization of the RMB.

This afternoon, I would like to touch upon on three topics. The first topic is the new pattern of the internationalization of the RMB and the global gold market. China’s gold market was established in 2002 with the launch of the Shanghai Gold Exchange. If anyone is familiar with the history of China’s gold market, you will know that before the year 2002 the Chinese gold market was entirely ran by the People’s Bank of China, including the process of purchasing, allocating and storing of gold. There wasn’t a single unified market where all participants could trade at the same time. Since the year 2002, with approval of the State Council, the People’s Bank Of China developed gold spot trading on the Shanghai Gold Exchange, as well as gold futures trading and over-the-counter trading via commercial banks, etc, which formed the basis for a multi-level diversified gold market system.

While the Chinese gold market was developing rapidly, the pattern of the global gold market was also having a dramatic change. As time passed, the international gold spot market was heavily concentrated in London and the international gold futures market has been concentrated in New York. However, in recent years, with the rise of gold demand in China, India and other Eastern nations, and with the exit of European and American banks from the precious metals market, it’s clear that Western gold is moving to the East. In 2015 gold demand in China and India was at 985 tons and 849 tons respectively. These figures alone account for 45% of global [consumer] gold demand. With gold demand from other markets dipping to various levels, China is not only the world’s largest gold producer and importer of gold, but has also become the world’s largest gold consumer.

Just now, I mentioned that the two main centers for gold trading are London and New York, and the current situation is Western gold flowing to the East. Everyone, have a look at some statistics that I have here, showing that just China and India alone make up over 45% of global gold demand. This was last year’s data.

The Shanghai Gold Exchange provides the important infrastructure for China’s gold market. ECB officials have mentioned that an important part of promoting the internationalization of the RMB is having a good financial market infrastructure. The exchange is also an important “all-in-one” foundation for gold transactions, clearing, delivery and storage. It serves with the commitment to provide gold investors with efficient and convenient market services. It has been 14 years since establishment of the exchange in the year 2002 and development has been rapid with annual trading volumes increasing 40% on average.

At the end of 2015 there were over 8.6 million individual accounts, over 10,000 institutional accounts and the total gold trading volume for the year reached 17,000 tonnes. The exchange was ranked as one of the largest and we firmly grasped an important opportunity for the internationalization of the RMB with the profound changes happening in the gold market. At the same time, we want to build a harmonious ecological gold market that sets a new path for the global gold market and achieve the status of being a global gold power from a large gold holding nation.

As of now, the exchange has 67 international members, including most of the world-renowned gold suppliers and traders like Mr Thomas McMahon, who is also our Exchange’s member. At the end of the third quarter of 2016, the international board had recorded a total of 7,837 tonnes of gold traded, with a turnover valued at nearly 200 billion RMB. The Shanghai International Gold Exchange is the test pilot and pioneer for opening up China’s gold market to the world. It is significantly important for further increasing the capacity, expansion and international influence of China’s gold market. In addition, the international board uses RMB for settlements, producing an effective convergence of the RMB offshore and onshore markets, expanding the cross-border use of the RMB and providing a new channel for return of funds. All these points steadily promote the internationalization of the RMB and serve as a useful exploration.

For RMB denominated gold products to gain popularity outside of China, we think the prerequisite is to provide a fair offering for global gold market transactions, with reliable gold benchmark pricing in RMB, using the Shanghai Gold Exchange benchmark pricing mechanism [Shanghai Fix] for our trading platforms. The weight of the gold traded is 1 kilogram, with a fineness of no less than 99.99%. Using a price inquiry method and market volume, a balance is reached to form the benchmark price of gold measured in RMB. The price announcements will be released externally each trading day at 10:15 and 14:15.

Overall, for the internationalization process, we have three steps to take. The first step is to be open and inclusive, actively inviting foreign investors to come in. Just now, we have introduced our international board after the establishment of the Exchange and we will continue to increase publicity efforts. In accordance to high standards and multifaceted principles, we will continue to increase and expand international membership of the Exchange. Accordingly, we have carried out a variety of promotional activities in major financial hubs and countries and regions along the new Silk Road to allow more international market participants to hear the sound coming from the Chinese gold market. The exchange also takes the opportunity to actively learn from the experience of advanced international markets in the optimization of various trading systems and innovation of all kinds of trading products.

For the second step, since we have invited guests inwards, we also have to step outwards. Through cooperation and win-win situations, the gold Exchange can be promoted and step out of China. The Shanghai gold benchmark price has now taken a first step with the Dubai Gold Exchange agreement. This can be considered an ice-breaking move and serve as a cooperation model for other overseas markets and improve the recognition, branding and acceptance of the Shanghai gold benchmark price. Taking this as an opportunity, the Shanghai Exchange, together with the Chicago Mercantile Exchange (CME, COMEX), the Hong Kong Stock Exchange, the Malaysian Stock Exchange and a number of foreign exchange markets explored on long-term cooperation mechanisms that will allow foreign investors to directly participate in our gold market, in RMB denominated gold trading, standard gold settlement, and many other aspects and modes of cooperation that will increase the Shanghai Gold Exchange’s international market influence.

The third step is to realize RMB internationalization and increase global transaction on the exchange through integration and upgrades. As the international financial markets continue to merge and develop, market boundaries are increasingly blurred and we believe that market fragmentation will be removed gradually. In recent years, we can all notice that there are more and more mergers and acquisitions among major exchanges in the world. We hope to learn from the experiences of such joint stock mergers and acquisitions between global exchanges and explore the different modes of industry integration with overseas exchanges. By offering a wide range of local and overseas products through an open platform [SGEI], we hope to create a world class exchange group. The journey of the internationalization of the Shanghai Gold Exchange will epitomize the opening of China’s financial markets to the outside world and play an important part in the internationalization of the RMB. With Shanghai becoming the third most important market in the world after London and New York, the Chinese gold market will make a great contribution to the internationalization of the RMB. Thank you everyone.