Withdrawals from the vaults of the Shanghai Gold Exchange (SGE) in week 2 of 2015 (12 – 16 January) accounted for an incredible 70 metric tonnes. Aggregated withdrawals in the first two weeks of this year stand at 131 tonnes. 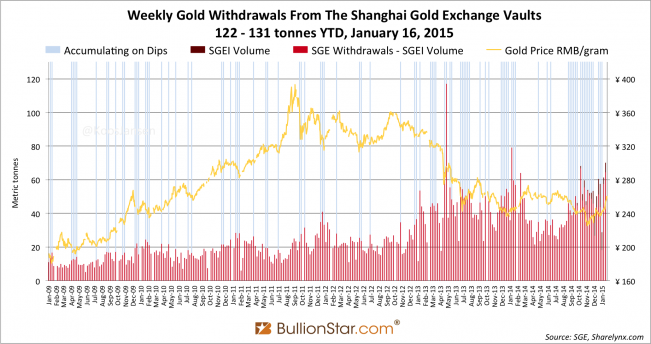 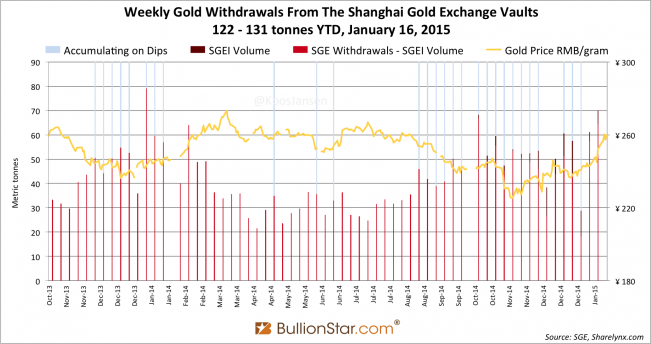 Corrected by the volume traded on the Shanghai International Gold Exchange (SGEI), withdrawals in week 2 were at least 65 tonnes (read this post for a comprehensive explanation of the relationship between SGEI trading volume and withdrawals). Year to date withdrawals corrected by SGEI volume were at least 122 tonnes.

The numbers just mentioned are truly amazing, 70 tonnes withdrawn in one week is the third highest amount ever. Only in January 2014 when the Chinese were also buying gold for the Lunar year – but the gold price in renminbi was lower, and in April 2013 when the price of gold fell of a cliff, were withdrawals stronger than last week. This is important, as illustrated in the charts above the Chinese tend to buy gold when the price is declining, last week they bought like there was no tomorrow while the price was rising sharply. Now that’s strong demand! Perhaps some investors in the mainland read the recommendations from ICBC, world’s largest bank, regarding physical gold hoarding:

In perspective; 65 tonnes demand (the bottom limit) can only have been met by mine supply, scrap supply or import supply. Domestic mine production was 8.7 tonnes; gold was not trading at a discount, but at a premium to London last week, which means scrap couldn’t have been abundant; estimating scrap that supplied the SGE at 4 tonnes leaves import to have been at least 52.3 tonnes (in one week). Nothing unusual if this would occur sporadically, but since 2013 China has net imported 2,838 tonnes for just non-government demand, continuously draining global above ground gold inventory – as world mine production is not sufficient. How long can this go on? Deutsche Bank estimates the PBOC imports an additional 500 tonnes a year, according to a report released in November 2014:

…But there have been a number of examples of publicly flagged large-scale official gold transactions that have had a limited market impact. In the IMF example above, gold prices rose steadily despite the IMF being a reliable seller of almost 20 tonnes each month. In another example, the Chinese government’s open market purchases of roughly 500 tonnes per year have not prevented the gold price from plummeting in recent years.

The world Gold Council (WGC) estimates there is about 170,000 tonnes of above ground gold. In my opinion it’s impossible to know how much gold has been mined in the history of humanity, though I suspect it’s more than 170,000 tonnes, also because of what we are witnessing these years regarding amounts of gold moving from West to East – the WGC started counting from 10,000 tonnes since the Californian gold rush.

To my advantage for estimating Chinese wholesale demand (that equals SGE withdrawals), SGEI trading volume has been insignificant since the SGEI was launched in September 2014. SGE management of course was aiming for substantially more volume at their new subsidiary. In order to boost liquidity they took a bunch of measures. On December 29, 2014, the SGE announced free storage and no load-in and load-out fees from January 1 to June 30, 2015.

All international members and customers:

With a view to encouraging international members and customers’ participation in trading and delivery activities on the International Board and meanwhile reducing their cost, the Shanghai Gold Exchange determines to further exempt international members and customers from fees including inventory fees, load-in and load-out fees, vault transfer fees and other service fees generated from trading contracts listed on the International Board. The exemption period shall be valid from January 1st to June 30th, 2015.

With a view to promoting the liquidity and enhancing the investment function of Au(T+N) products, the Shanghai Gold Exchange (the “Exchange”) determines to reduce the transaction fees of Au(T+N1) and Au(T+N2) by 50%, from the current 2‰ to 1‰. In addition, the Exchange shall also exempt all its members from transaction fees of contracts listed on the International Board including iAu99.99, iAu99.5 and iAu100g, so as to boost the trading activities on the international board.

The above-mentioned preferential policies shall be valid from January 1st to June 30th, 2015.

Then on January 15, they decided to collaborate with the WGC to promote SGEI trading:

Today, the Shanghai Gold Exchange and the World Gold Council, the market development organization for the gold industry, signed a ‘Memorandum of Understanding’ regarding a ‘Comprehensive Strategic Cooperation Agreement.’ The Shanghai Gold Exchange is the largest physical gold exchange worldwide and the World Gold Council is the global authority on the gold industry. Together, these two organizations are joining hands to support the development of both domestic and international gold trading in China by leveraging the opportunity provided by the internationalization of the Chinese gold market, through the Shanghai Free Trade Zone, to support market expansion. The agreement will support the development of gold investment products and solutions for the industry and investors both regionally and globally.

I’m holding my breath on the collaboration with the WGC. In my experience they could have started by making the SGEI more accessible. Since September I was trying to become a customer through a number of Chinese banks, but I didn’t succeed. Enrollment wasn’t particularly easy. 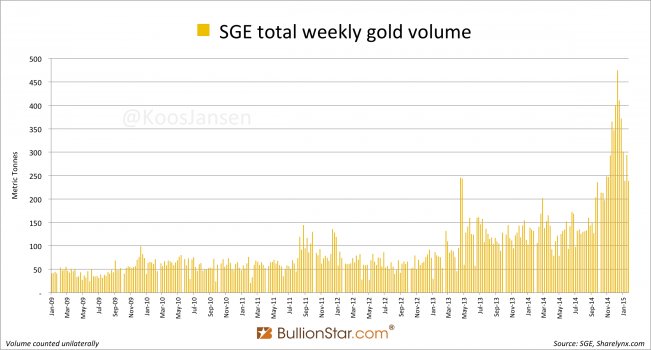 Volume on the Shanghai Futures Exchange is moving in the opposite direction, volume has been increasing since December 26. In week 3 volume was 778 tonnes, up 10 % w/w. The open interest closed at 124 tonnes at the end of the week. 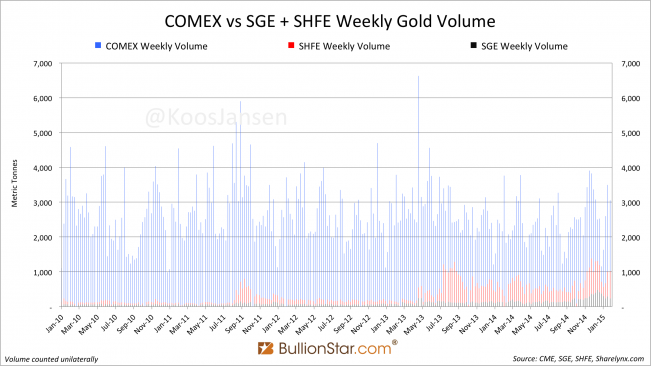