First let’s have a look at the latest SGE trade report of week 52 (December 22 -26). Total SGE gold withdrawals was a staggering 58 tonnes in week 52, year to date (until December 26) SGE withdrawals have reached 2,073 tonnes. With three trading days left (December 29 – 31) total withdrawals are 124 tonnes shy of the 2013 record (2197 tonnes). The possibility 2014 withdrawals will transcend 2013 is small, though 2014 has once again been an incredible strong year for Chinese gold demand.

Regular readers of this blog are used to the tonnage being withdrawn from the SGE vaults every week, often more than 40 tonnes (in one week). The fact the mainstream media, or the World Gold Council, CPM Group or Thomson Reuters GFMS, still don’t report these numbers is getting weirder by the day.

Because gold bullion export is prohibited in china, we know by tracking SGE withdrawals, fairly accurate, how much gold is being added to Chinese non-government gold reserves. This year that amount will be about 1,700 tonnes.

Some SGE data lags one week, some not; in this post all gold data is up to week 52 (December 26). 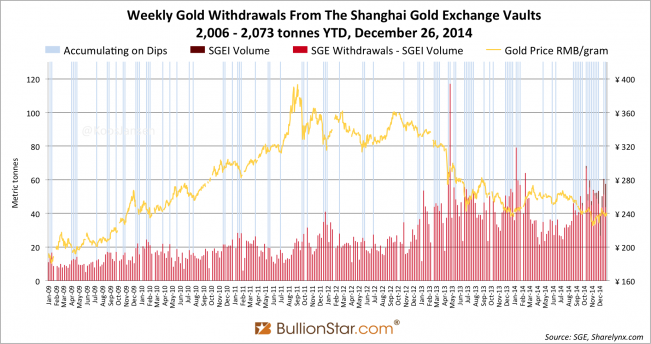 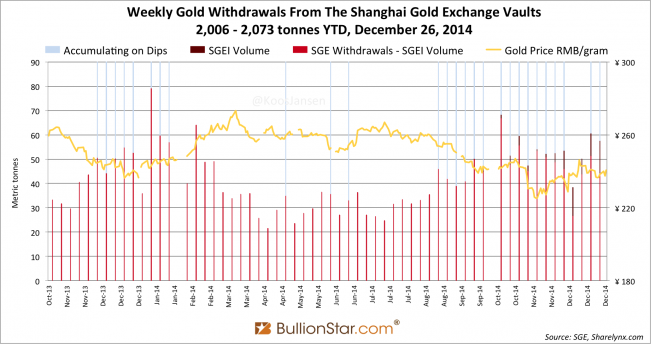 My best estimates for the supply side of SGE withdrawals (2,006 tonnes):

Let us have a look at size of the precious metals (paper) markets in China relative to the COMEX.

SGE gold trading volume saw a remarkable lift-off this year, most likely because 8 SGE contracts were allowed to be traded by foreign investors. 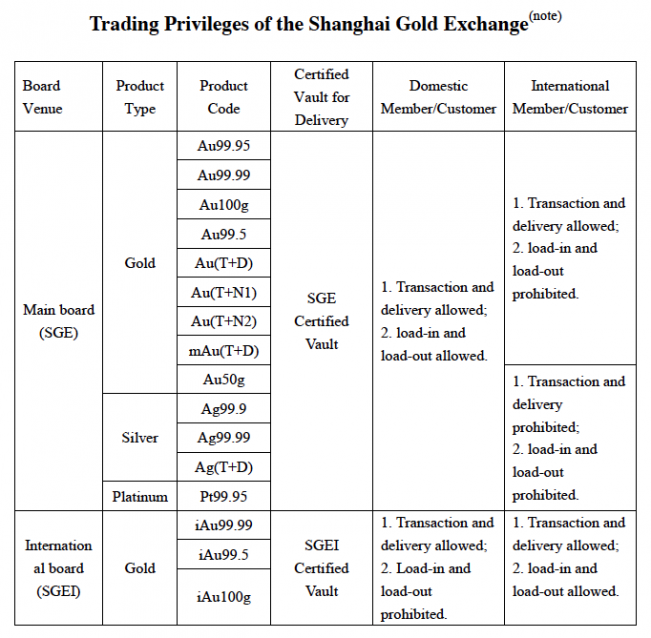 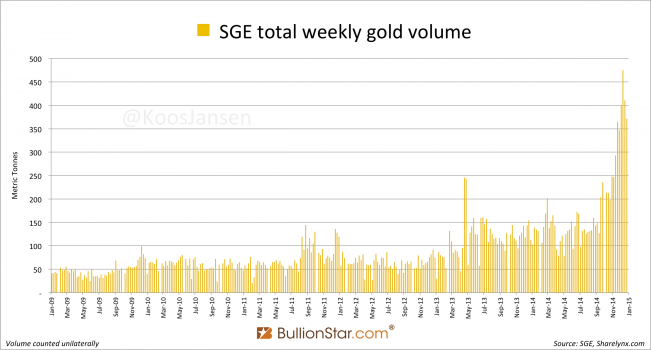 Volume on the two largest gold futures exchanges on earth (COMEX and the SHFE) have been low in week 52. On the Shanghai Futures Exchange (SHFE) volume in week 52 dropped 56 % w/w, to 344 tonnes. On the COMEX weekly volume dropped 54 % w/w, to 1,152 tonnes (the COMEX trading week counted only four days). 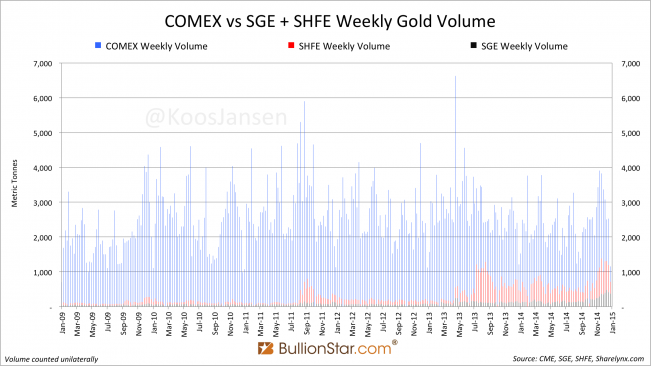 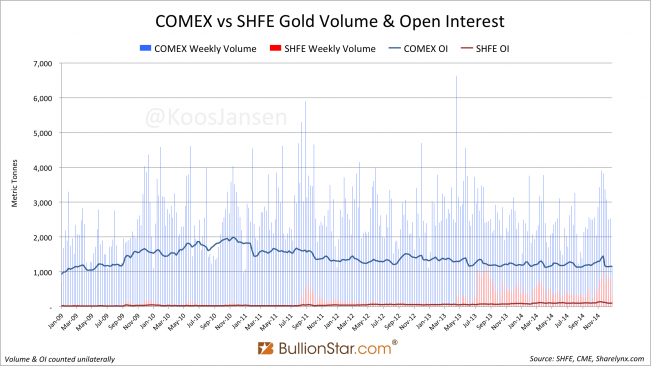 Let’s have a look in the silver pit. For silver we have all the data of all exchanges (SGE, SHFE, COMEX) for 2014 complete. 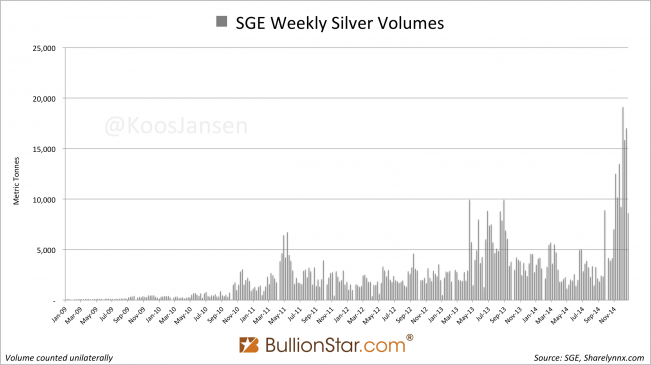 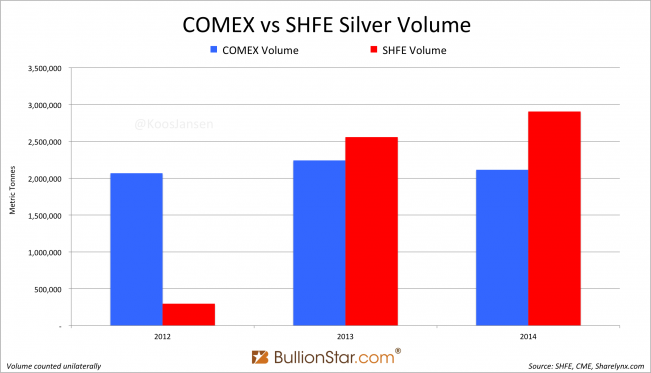 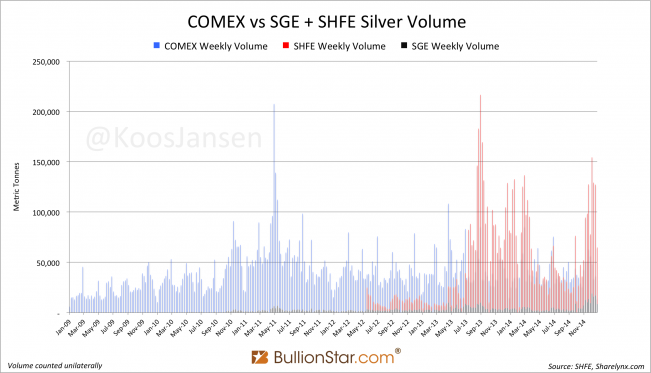 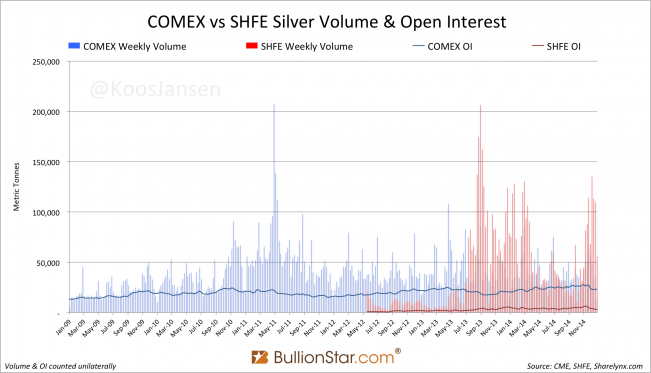 Silver inventory at the SGE dropped 8 % y/y, to 103 tonnes. Silver inventory on the SHFE dropped 71 % y/y, to 123 tonnes. Note, there are many other (spot) silver exchanges in China, these inventories don’t mean that much. SHFE inventory has been emptied because the cash and carry trade closed (read this post for a simplified explanation) when the silver futures curve on the SHFE went from contango to backwardation. 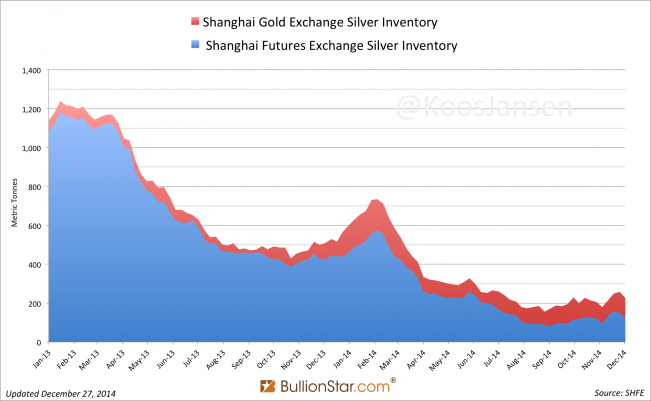 Currently the futures curve on the SHFE is in contango, 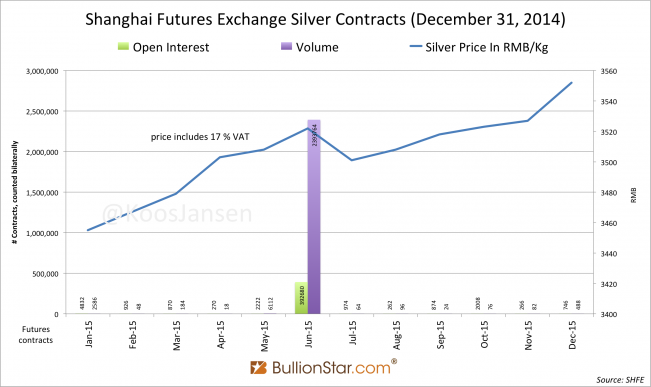 …which caused the discount of silver in the mainland to increase relative to London spot. 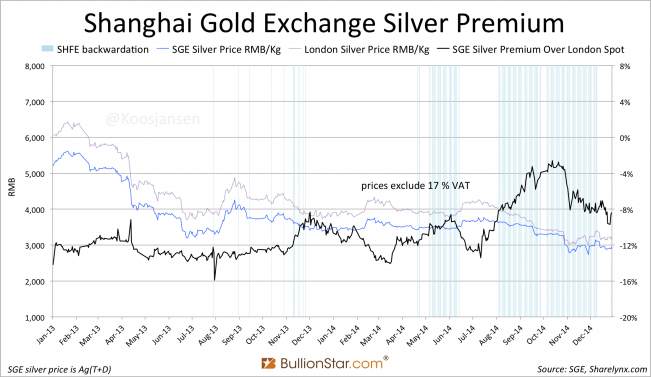 Silver export from China enjoys 17 % VAT, hence the discount is not arbitraged. (for more information on the structure of the Chinese silver market read this post).