Willem Middelkoop: A New Gold Standard In The Making

“Putin is the biggest gold bug”, was the title of a recent Bloomberg op-ed by Leonid Bershidsky the founding editor of Vedomosti, Russia’s top business daily. He explains why the Russian central bank has accumulated almost 100 tons of gold in the last four months of 2014. It is an acceleration of the gold buying program which started in 2007, a year before the Lehman collapse. 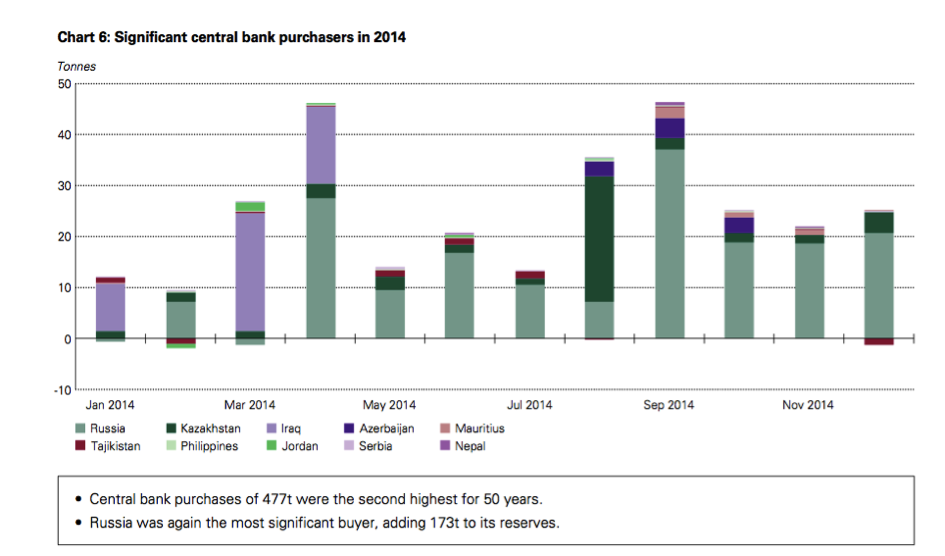 Besides accumulating gold the Russians have been quite active sellers of US Treasuries. Between November 2013 and December 2014 they have sold around $30 billion of US government bonds while they grew their gold reserves from $43 to over $50 billion in a clear effort to de-Americanize the Russian economy. Just like the Chinese they as well signed bilateral currency-swap-deals in a move away from the dollar. 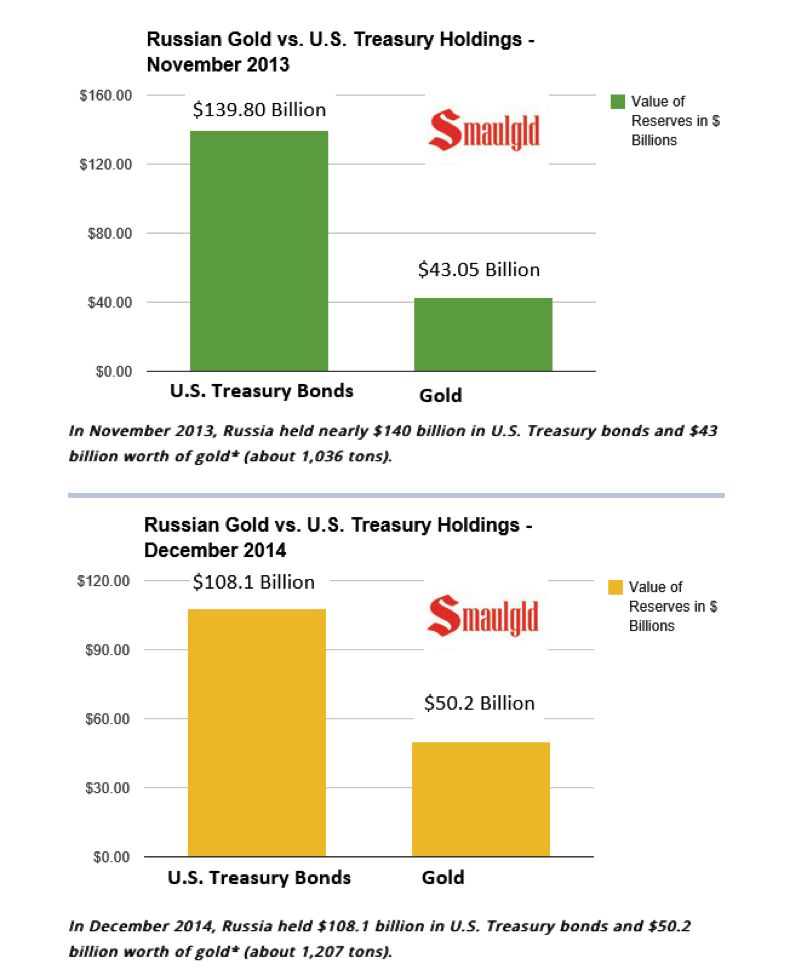 The Russian activities can be seen as part of an all-out financial war between Russia and the West as best described by Putin’s economic advisor Sergei Glazyev in a recent interview:

I believe that in a situation of growing military and political confrontation the gold price will move up again. And let’s not forget that America’s refusal to honour their debt will undermine trust in the dollar not just in this country but also in others. It will be a step towards the end of the American financial empire. It will give us a chance to be among the first to suggest a new configuration for the world financial system, in which the role of national currencies will be significantly higher.

The Chinese, who have shown all kind of financial and economic support for Russia in recent months, have been on a gold buying spree as well. In the last ten years Chinese buyers have accumulated over 10,000 tonnes of gold. 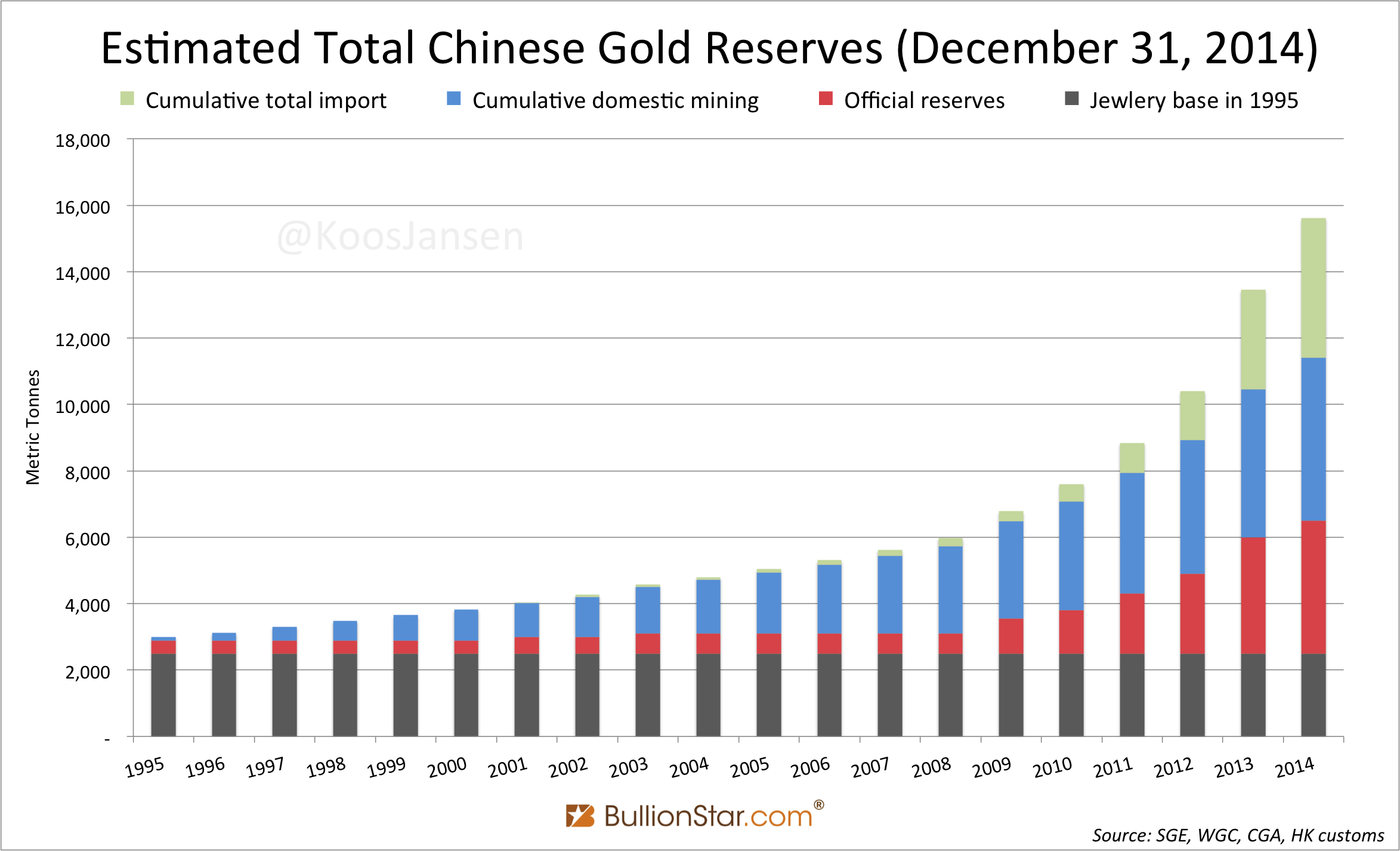 While Western banks are trying to scare customers away from buying gold, the Chinese have opened up over 100.000 retail outlets to promote gold and silver among the public. In my book I quote from an article by Sun Zhaoxue, the former president of both the China National Gold Corporation (CNG) and China Gold Association (CGA), first published by gold analyst Koos Jansen:

Individual investment demand is an important component of China’s gold reserve system; we should encourage individual investment demand for gold. Practice shows that gold possession by citizens is an effective supplement to national reserves and is very important to national financial security. Because gold possesses stable intrinsic value, it is both the cornerstone of countries’ currency and credit as well as a global strategic reserve. Without exception, world economic powers established and implement gold strategies at the national level.

Mr Sun outlines why substantial national gold reserves are so important for countries like China:

In the global financial crisis, countries in the world political and economic game, we once again clearly see that gold reserves have an important function for financial stability and are an ‘anchor’ for national economic security. Increasing gold reserves should become a central pillar in our country’s development strategy. International experience shows that a country requires 10% of foreign reserves in gold to ensure financial stability while achieving high economic growth concurrently. At the moment, the US, France, Italy and other countries’ gold accounts for 70%  of forex reserves. After the international financial crisis erupted, (our) gold reserves were increased to 1054 tons  but gold reserves account for less than 1.6% of financial reserves – a wide gap compared to developed countries.

According to him, the Chinese government is intent on accumulating additional high quality (gold) assets:

The state will need to elevate gold to an equal strategic resource as oil and energy, from the whole industry chain to develop industry planning and resource strategies… increasing proven reserves, merger and acquisitions, base construction and opening up offshore gold resources to accelerate increase of national gold reserves. Concurrently, actively implement a globalization strategy that will exploit overseas resources and increase channels to grow China’s gold reserves. We should achieve the highest gold reserves in the shortest time.

According to Bloomberg the Chinese have stopped buying US Treasuries as well. Instead the Chinese have signed contracts worth $100’s of billions with Russia; this is a strong diplomatic sign of support for Russia. The two countries even signed a contract for a $240 billion investment for a 7000 km high-speed link between Beijing and Moscow.

These developments illustrate a growing divide between the financial interest between East and West. Now sovereign bond and deposit yields at or below zero we have reached the financial endgame, as the Saxo bank and Deutsche Bank have been writing recently. The IMF has published a report in which the economists Rogoff and Reinhart point to the need for debt restructurings in advanced economies. Debt restructurings and finding a new world reserve currency are the main aspects of a coming Monetary Reset.

Recently we have seen some more confirmation major countries are preparing for a new phase of the international monetary system. During two conferences in China last year, a coming financial reset has been discussed. At the 2014 edition of the Chinese International Finance Forum (IFF) “[..] a new global financial order has been discussed with China." According to the former ECB President Jean-Claude Trichet. Chinese media reported the three days the forum (including U.N., World Bank, IMF participations) discussed “the new framework for the global financial and economic system".

Preparations for a monetary reset were also confirmed by Zhou Ming, General Manager of the Precious Metals Department at ICBC during the LBMA Forum in Singapore;

With the status of the US dollar as the international reserve currency being shaky, a new global currency setup is being conceived.

In 2012 the former Bank of England Governor Mervyn King already predicted advanced economies would probably not be able to get out of the current crisis without large debt restructurings and a recapitalization of the financial system (banks):

I am not sure that advanced economies in general will find it easy to get out of their current predicament without creditors acknowledging further likely losses, a significant writing down of asset values and recapitalization of their financial systems…. Only then will it be possible to return to a more normal provision of the vital banking services so crucial to an economic recovery.

Yes even Alan Greenspan acknowledged that, ‘It is mathematically impossible to cover future government promises’. The US unfunded liabilities (pension and health costs) are as high as $128 trillion.

Japan is the best and most worrying example of the sheer magnitude of public debt, which will reach 250% of GDP in 2015. At the end of 2014 the architect of Japan’s radical economic policies, often describe as ‘Abenomics’ Koichi Hamada called the aggressive moves by the Japanese central bank a Ponzi-scheme:

In a Ponzi game you exhaust the lenders eventually, and of course Japanese taxpayers may revolt. But otherwise there are always new taxpayers, so this is a feasible Ponzi game, though I’m not saying it’s good.

One more insider who is very vocal about the need for a monetary reset and who’s views we shouldn’t ignore, is the legendary hedge fund manager George Soros:

The system we now have has broken down, only we haven’t quite recognized it. So you need to create a new one and now is the time to do it… You need a new world order where China has to be part of the process of creating it. They have to buy in [which they are doing by buying gold] … And I think this would be a more stable one where you would have coordinated policies. I think the makings of it are already there because the G20 effectively is moving in that direction… So there is a general lack of confidence in currencies and a move away from currencies into real assets…. Especially in the area of commodities.

The gold repatriation by several European countries is another sign we are reaching an end of a monetary calm period of over 40 years. The Europeans follow in the footsteps of other countries to repatriate their physical gold holdings from the US. According to a former Director of the United States Mint:

More countries are repatriating their gold. For them, an audit is not enough. They would like their gold back. Azerbaijan, Ecuador, Iran, Libya, Mexico, Romania and Venezuela is a short list of countries that have requests into their custodians to transfer some or all their gold back to their countries.

We can only conclude gold is making a remarkable comeback into our financial system and even that a new gold standard is being born without any formal decision. At least that’s how Ambrose Evans- Pritchard, an influential international business editor of The Telegraph, described the on-going efforts by countries to lay their hands on as much physical gold as possible:

The world is moving step by step towards a de facto Gold Standard, without any meetings of G20 leaders to announce the idea or bless the project… Neither the euro nor the dollar can inspire full confidence, although for different reasons. EMU is a dysfunctional construct, covering two incompatible economies, prone to lurching from crisis to crisis, without a unified treasury to back it up. The dollar stands on a pyramid of debt. We all know that this debt will be inflated away over time – for better or worse. The only real disagreement is over the speed… The central bank (gold) buyers are of course the rising powers of Asia and the commodity bloc, now holders of two thirds of the world’s $11 trillion foreign reserves, and all its incremental reserves. It is no secret that China is buying the dips, seeking to raise the gold share of its reserves well above 2%. Russia has openly targeted a 10% share. Variants of this are occurring from the Pacific region to the Gulf and Latin America. And now the Bundesbank has chosen to pull part of its gold from New York and Paris. Personally, I doubt that Bundesbank had any secret agenda, or knows something hidden from the rest of us. It responded massive popular pressure and prodding from lawmakers in the Bundestag to bring home Germany’s gold. Yet that is not the story. The fact that this popular pressure exists – and is well organised – reflects a breakdown in trust between the major democracies and economic powers. It is a new political fact in the global system.

These latest development can have big repercussions in the future, just like the repatriation of gold in the 1960s lead to the implosion of the London gold Pool in 1968 and the rise of the gold price from $35 in 1969 to over $800 in 1980.

These indications about the coming changes for our monetary system don’t mean we have to expect a monetary reset earlier than previously expected. The planned changes will take time to discuss and to prepare. But we will experience them in the next decade for sure. They could be introduced as one worldwide monetary reset or in a series of smaller steps.

Willem Middelkoop is founder of the Commodity Discovery Fund and author of The Big Reset.