The day after the World Gold Council (WGC) released Gold Demand Trends Full Year 2014 in which they audaciously pretend Chinese gold demand last year was 814 tonnes, we can read from the Chinese SGE trade report of week 5 withdrawals from the vaults have been 59 tonnes. Year to date (– February 6) withdrawals from the vaults of the central bourse in China stand at 315 tonnes. In perspective, during the first five weeks of 2015 Chinese wholesale demand has been 39 % of what the WGC disclosed as total consumer demand in all of 2014. 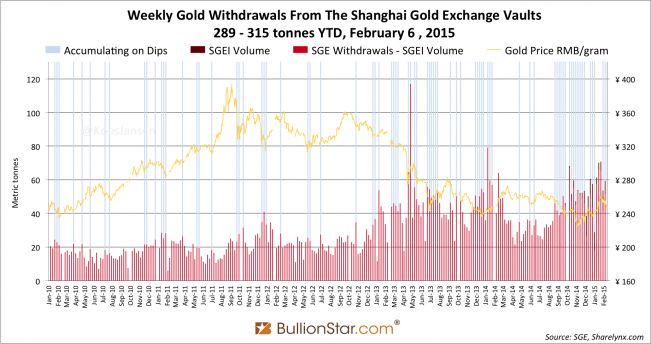 Because of the importance of clarifying the mysterious gap between what the WGC discloses as Chinese gold demand in 2014 (814 tonnes) and the amount of gold we saw being supplied to China (at least 1,200 tonnes import, 452 tonnes mine output and 182 scrap supply = 1,834 tonnes), I would like expand on this subject in a separate post.

One quote I wish to share here; when I was researching Chinese market and reading through an old Alchemist copy (#75, page 11), my attention was drawn to a transcript from a keynote speech delivered by Jeremy East at the LBMA Bullion Market Forum in Singapore on 25 June, 2014. He made a remarkable comment we shouldn’t neglect when analyzing the Chinese gold market:

Why are the Chinese Buying?

So what is going on in China? Why are the Chinese buying? It only seems to have been happening over the last few years. What is going on?

I was at the Shanghai Derivatives Forum at the end of May and one of the speakers was a representative of the [China] Gold Association. He gave us quite an interesting insight into the flavor of what is going on in China from a strategic perspective. Some of the things he talked about included that China planned to change the landscape of world gold markets. He talked about having a strong currency and about having that currency backed by gold, like the US dollar. He also talked about people holding more gold and encouraging more people to hold gold. That is not just individuals, but also the central bank. From that perspective, it is also getting gold into the country in terms of encouraging domestic gold production, but also investing in international mining companies and sourcing the product from them. China has got a very friendly gold strategy.

There you have it, China is planning to change the landscape of world gold markets and strengthening the renminbi through supporting it by gold. Therefor it’s in the interest of the People’s Republic Of China not only Chinese individuals hoard gold, but the central bank as well. To achieve this mining and import is stimulated by the State Council.

Remember what Zhou Ming, General Manager of the Precious Metals Department at ICBC, said at the same conference?

…a new global currency setup is being conceived.

Mr East’s statement fits right into what we see the Chinese are doing; accumulating massive amounts of gold, developing their gold market, internationalizing their gold market and the renminbi. This little peak at the China Gold Association’s chessboard is more confirmation of where we’re going! Gold is making its way into the international monetary system.