Chinese wholesale gold demand can be slightly less than what is disclosed because of withdrawals from the Shanghai International Gold Exchange. My best estimate is SGE withdrawals could be 3 tonnes less at 505 tonnes. However, I have no hard evidence any foreign traders are withdrawing gold from the Shanghai International Gold Exchange. I’ve made an inquiry at the SGE if they can shed some light on this. Hopefully, next week I know more. 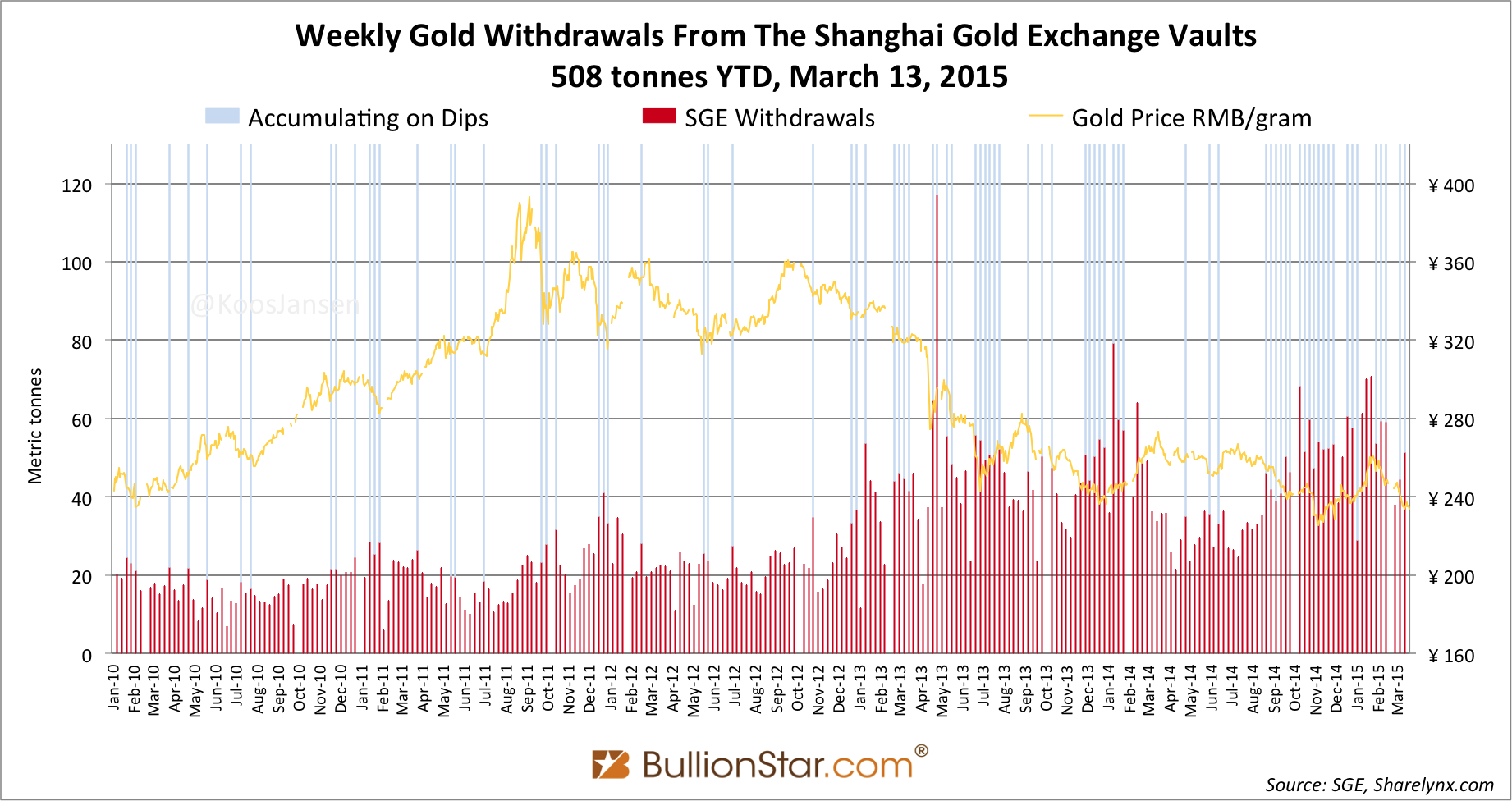 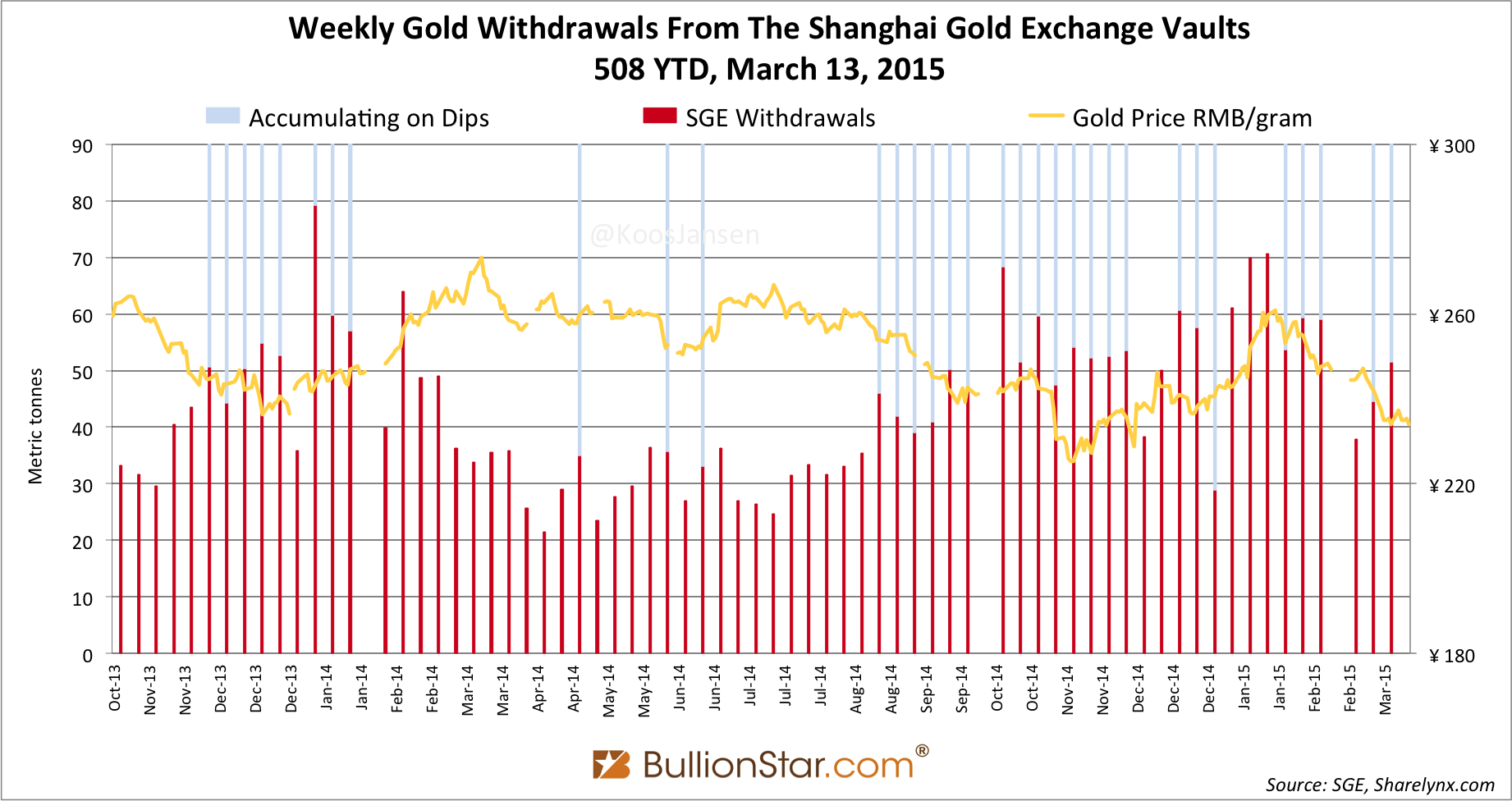 Week 10 was a clear example of a falling gold price in renminbi, which spurred the Chinese to purchase gold at the SGE and subsequently withdraw from the vaults.

BullionStar has a new unique feature online; a chart widget to measure anything in anything (stock indexes, precious metals, fiat currencies, commodities and stocks). For example Gold in Euros, the S&P 500 in Crude Oil, or US dollars in Renminbi. The next screenshot is an example of the price of gold in renminbi in week 10, 2015. 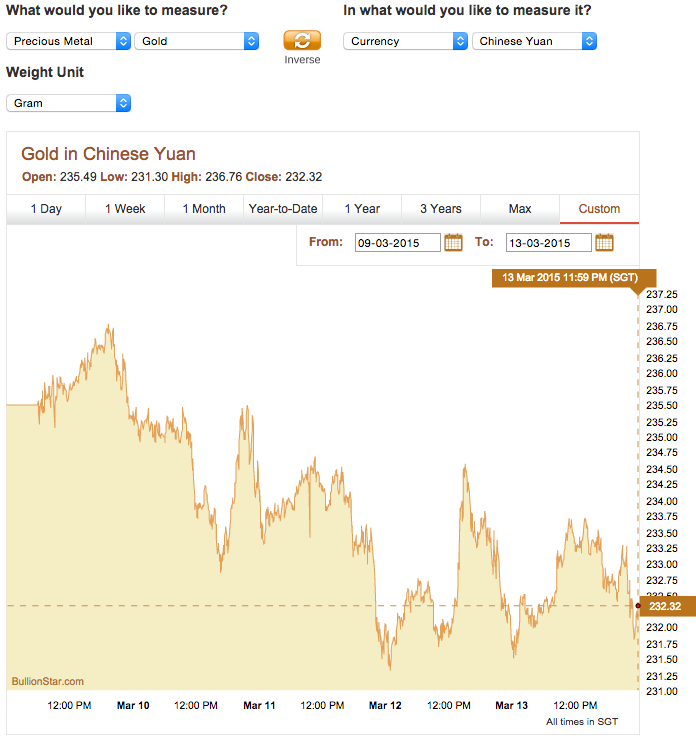 Because of the mechanics of the Chinese gold market,

Over the first ten weeks in 2015 domestic mine supply has been roughly 85 tonnes, SGE scrap supply (at a yearly rate of 250 tonnes) approximately 45 tonnes.

From January 1 until March 13, in just over two months, China has imported an estimated 378 tonnes.

A rough estimate suggests SGE withdrawals are set to reach 600 tonnes in Q1; net import 450 tonnes, domestic mining 100 tonnes and scrap (gold-for-gold and gold-for-cash) 50 tonnes. Depending on what metric used, Chinese gold demand will be somewhere in between 570 and 600 tonnes. Let’s wait what the World Gold Council (WGC) will publish as Chinese gold demand Q1. Probably about half of this, just like they did last year.

VietNamNet Bridge – The World Gold Council (WGC) has reported that Vietnam consumed 69.1 tons of gold in 2014. However, Vietnamese experts disagree with that assessment.

“It is unclear where WGC sought information to make report. But I can say for sure that the total revenue of all Vietnamese gold companies could not make up such a figure,” he said.

Trong said a large jewelry company needs about 200 kilos of materials a month to make jewelry.

The number of large jewelry companies can be counted on one hand or two, and the actual volume of gold materials is not high.

Other goldsmith shops mostly process finished products they buy from customers, and do not have demand for gold materials.

“12.7 tons of jewelry gold consumed in 2014 was reasonable, if counting the jewelry illegally imported from China. The jewelry market last year was very gloomy,” he noted.

“The remaining 56.4 tons of gold was listed as bullion gold for investment. However, it’s unclear where the imported bullion gold has gone,” he said.