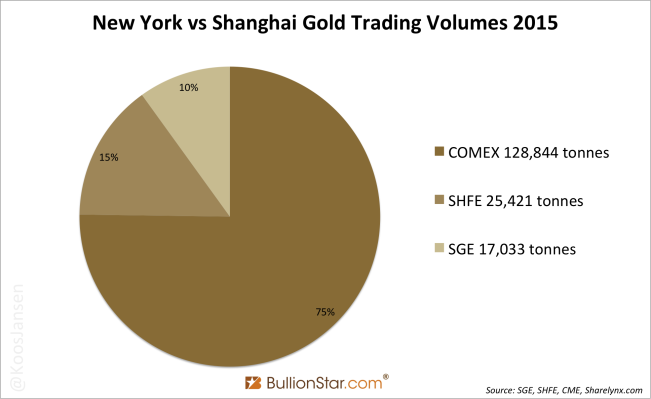 It’s unknown how much gold is traded in the Over-The-Counter London Bullion Market. However, a survey conducted by the LBMA in 2011 pointed out approximately 680,783 tonnes of gold per year change hands through the London based market.

All tonnages mentioned in this post are counted single-sided.

There are a few more interesting data points to be found in SGE trading for 2015 when examining the developments of the specific contracts.

At the SGE two types of gold products (/contracts) can be traded: physical products and deferred products. The physical contracts traded on the Main Board (SGE / domestic market) are:

The physical contracts traded on the International Board (SGEI / international market) are:

The contracts above cannot be traded on margin and are settled (/delivered inside SGE(I) designated vaults) immediately (T+0), therefor they embody pure physical trading.

The deferred contracts (only traded on the Main Board) are:

Because the deferred contracts are traded on margin and there is no fixed delivery date, these derivative products embody paper trading.

All SGE contracts can be traded competitively over the Exchange, but the physical contracts can also be negotiated bilaterally in the Over-The-Counter (OTC) market and then settled through the SGE system. The SGE publishes the volume of these OTC trades. 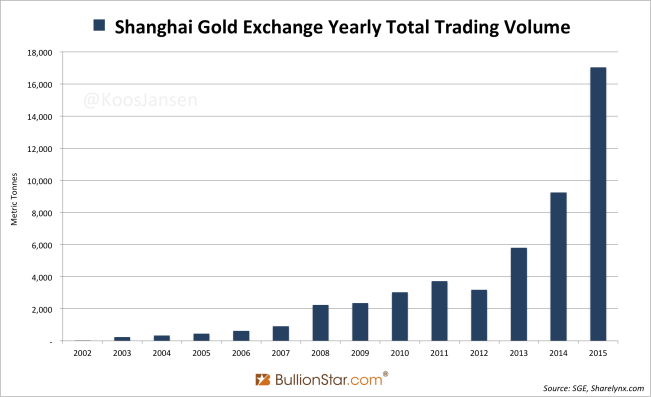 The growth in total gold trading at the SGE in 2015 was the strongest since the financial crisis erupted in 2008. According to my analysis one reason for this has been the opening of the Shanghai International Gold Exchange (SGEI) in September 2014.

The SGE system services gold trading for the domestic Chinese gold market. This gold traded over the SGE system is prohibited from being exported. The SGEI is a subsidiary of the SGE located in the Shanghai Free Trade Zone, where international members of the Exchange can import, trade and export gold. In terms of physical gold flows the SGE and SGEI are separated venues. For more information please read my previous post, “Workings Of The Shanghai International Gold Exchange”.

On the surface it looks as if the SGEI has been a failure. The most traded contract at the International Board is iAu99.99. At the start of 2015 iAu99.99 trading was weak and after a short peak in April, volume came down to practically nil throughout the middle and the end of the year. Hence, most analysts stated the SGEI was dead. There are two important points that undermine this statement. 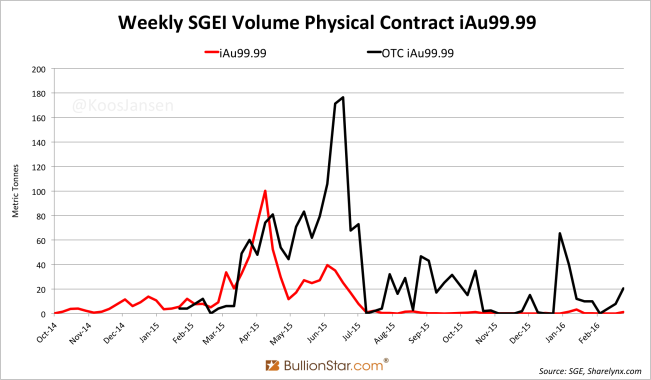 Tellingly, the iAu99.99 trades in the OTC market are all performed in giant batches of 100 or 1000 Kg. Have a look at the data labels in the chart below. We can see that all weekly OTC iAu99.99 volumes are in sizes one hundred (blue bars) or one thousand (red bars) 1 Kg bars. For example, look at the week that ended 3 July 2015, when exactly 73,000 Kg’s were traded. In theory 20,855 Kg’s were traded on Monday and 52,145 Kg’s on Thursday, aggregating to 73,000 Kg’s in total for the week. Though, this coincidence cannot have occurred each and every week. More likely the iAu99.99 traders in the OTC market always buy and sell per 100 or 1000 Kg’s. No other SGE or SGEI contract shows this bulky trading pattern. 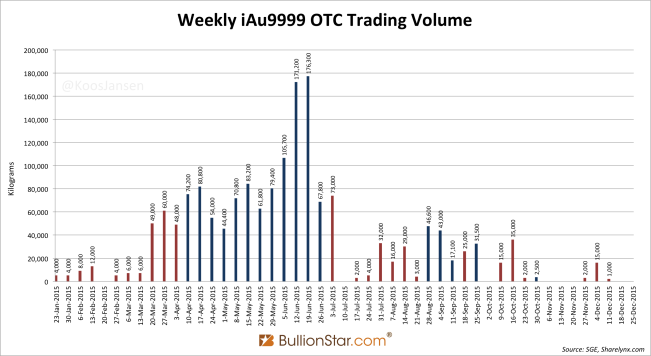 If we look at the next chart, we can see that since the inception of the SGEI in September 2014 total SGE volume (including domestic, international, physical and deferred contracts) increased significantly. My conclusion is that the gateway of the SGEI has increased liquidity at the Exchange in Shanghai and enhanced the connection between the Chinese and Western gold markets. 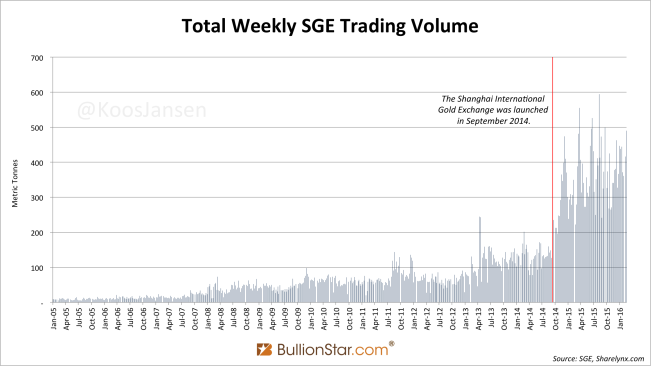 I realize the system of the SGE and SGEI, how trading and physical gold flows are divided, is not easy to understand. The best I can do to clarify this is to present the diagram furnished by the SGE showing how trading in all contracts by all customers is organized (see below). In the next post we’ll examine the physical gold flows going through China and the Shanghai Free Trade Zone.