Not often in financial markets is the future price of gold is lower than the spot price (live), but lately we’ve witnessed such an event in both the New York and London gold market. This is called backwardation, the opposite of contango.

What causes backwardation and will it increase the price of gold? In my opinion there are two possible scenarios: the market expects the gold price to fall in the future, or there is scarcity now.

Before we dive in let’s get a better understanding of this subject. Below is a visual interpretation of backwardation. I’ve drawn a graph that resembles the futures curve on the COMEX (New York) 15 September 2015. You can see that the price of gold 1-MONTH, 2-MONTHS and 3-MONTHS out is lower than the SPOT MONTH.

On 15 September the London (Over The Counter – OTC) forwards curve looked like this:

Both graphs do not show the full-length futures/forwards curve, only the first six months.

Just to be sure, let’s read the definition of backwardation from both trading platforms. From COMEX:

Market situation in which futures prices are lower in succeeding delivery months. Also known as an inverted market. The opposite of contango.

From the London Bullion Market Association:

A market situation where prices for future delivery are lower than the spot price, caused by shortage or tightness of supply.

Current market conditions exactly fit the description from the LBMA and COMEX, there can be no confusion, what we see in the graphs is backwardation. Oddly, CPM Group released a Market Commentary (The Non-Existence Of A London Gold Forward Backwardation) on 14 September 2015 stating gold is not in backwardation. From CMP Group:

Since 2009 the CME Group has operated a system allowing for London over the counter forwards to be cleared through the CME Clearinghouse, and publishes a daily curve of Cleared OTC London Gold Forwards. Few London forwards actually are cleared via CME’s contract, but the CME gathers actual forward quotes from banks and dealers every day and publishes a forward price curve based on these actual quotes,…

The quotes (prices) CPM attached to the document are from 11 September 2015 and are clearly in backwardation. Why CPM denies the obvious signs of backwardation is beyond me.

The Market Expects The Gold Price To Fall In The Future

Scenario one: at the same time we’re watching Western gold markets, an interesting event is unfolding in iron ore futures at the Chinese Dalian Commodity Exchange (DCE). These futures are trading at a severe discount to spot prices. Scenario two: the market does not expect the gold price to fall, and there is less supply than demand now. This results in the spot price to be pushed up relative to bets (contracts) in the future.

If bid/ask spreads allow it, in theory owners of physical gold located in New York or London can strike a profit by selling metal spot, while simultaneously buy back the gold at a lower price through a futures contract – in New York on the COMEX or through a forward contract in the London OTC market. Over time, when the futures/forward contract matures and the gold is returned, the initial owners have the same amount of gold as before but for a lower price than they sold it for. The profit is fiat currency (US dollars).

One reason why gold futures prices are normally higher than spot (contango) is because it costs money to store gold into the future. In addition, if gold futures decline relative to spot the arbitrage opportunity just described would increase spot supply and future demand, and thus push the market out of backwardation.

While witnessing backwardation, registered gold inventory at the COMEX available for delivery has diminished to a mere 5.1 tonnes. Are backwardation and a declining inventory related? I would say they are.

Actually, I think backwardation and contango cause inventory to go down and up, because of the cash and carry trade. First, the situation how contango increases inventory: when there is a steep enough contango futures curve all prices in the future are significantly higher than spot. An arbitrage opportunity arises where traders can borrow USD funds, buy spot gold and store it (in a COMEX vault) to sell through a futures contract at a higher price. If the difference between the spot and the future price over period X is higher than the interest to be paid plus the cost of storage over period X, it becomes profitable to cash and carry.

Contango can cause inventory to increase, whereas a lack of contango unwinds inventory. Also, during backwardation a reversed cash and carry trade arises: borrow gold to sell for USD and buy long a futures contract to settle the debt when the gold loan matures. The price of the futures contract would be lower than that of the gold borrowed. Whenever demand to borrow gold increases, the gold lease rate (GLR) goes up, which is exactly what happened recently.

We could say, negative GOFO signals scarcity in the gold market. Unfortunately the LBMA ceased publishing GOFO rates with effect from 30 January 2015 “following discussions between the LBMA and … Market Makers”. Ironically, GOFO rates went dark right after dipping into negative territory in 2013 and 2014. 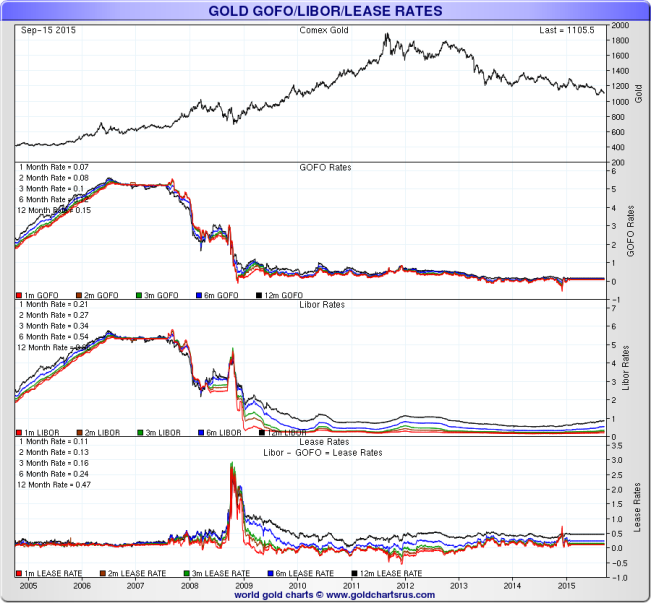 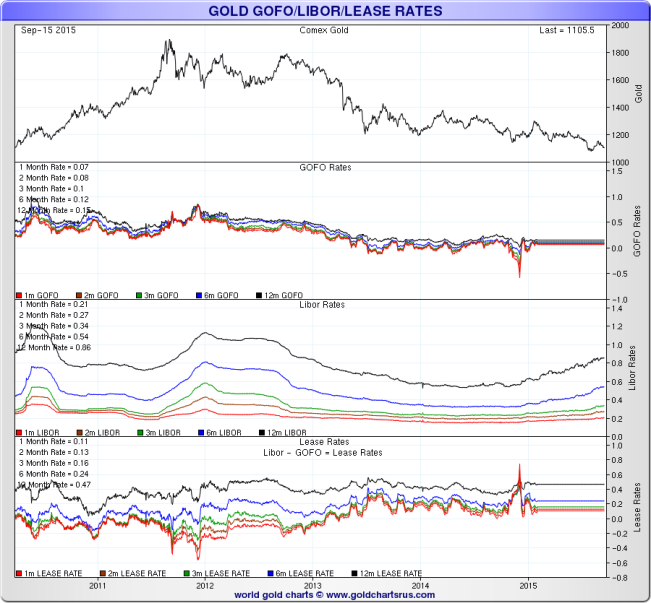 Remember exactly a year ago when silver inventory at the Shanghai Futures Exchanged (SHFE) had decreased from over 1,100 tonnes to below 100 tonnes? 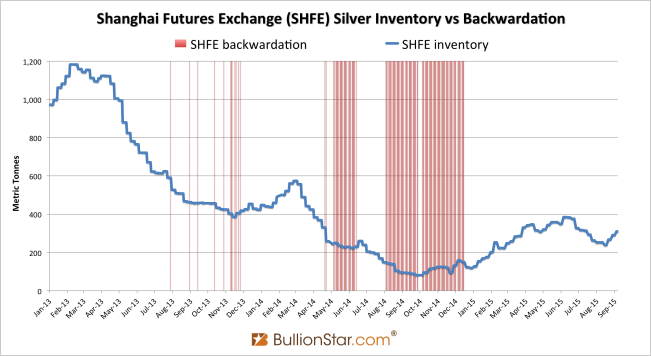 Indeed, when silver on the SHFE was in backwardation there was scarcity in the Chinese silver market and the price in Shanghai ran up relative to the international price. Only after SHFE silver backwardation flipped into contango inventory came of its lows.

Currently there is said to be scarcity in gold in the market. Which of the two scenarios described above is true will be exposed in the future!