Last week I wrote how I can disagree with other media, be it mainstream or alternative, Chinese, Russian or English, on the reporting of the gold market. This week another perfect example came by, from Russian news outlet Sputnik International. According to this press agency the Russian Central Bank (CBR) currently holds 360 billion US dollars in official gold reserves and Elvira Nabiullina, head of the CBR, is determined to raise this amount to 500 billion US dollars. This is not true.

The head of Russia’s Central Bank is determined to increase the country’s gold reserves to its previous levels in 2012-2013, from $360.5 billion up to $500 billion.

Russia will increase its gold reserves by up to $500 billion, said Elvira Nabiullina, the head of Russia’s Central Bank,…

Let’s do some math:

Sputnik International states Russia currently owns 360 billion US dollars in gold. At a gold price of 1,200 USD an ounce this equals to

However, Russia currently does not own 9,331 tonnes in official gold reserves. Instead, it currently holds 1,247 tonnes – a difference of 8,084 tonnes – according to the website of the CBR and the IMF.

According to Sputnik the CBR will raise its official gold holdings from 360 billion USD to 500 billion USD. Or, converted to weight, from 9,331 tonnes to 12,960 tonnes. Suggesting the CBR is about to buy 3,629 tonnes in the coming years.

The misunderstanding can be easily cleared. Sputnik, for whatever reason, used Russia’s total International Reserves, which are currently 360 billion USD. If we head over to the (English) website of the CBR, we can see: 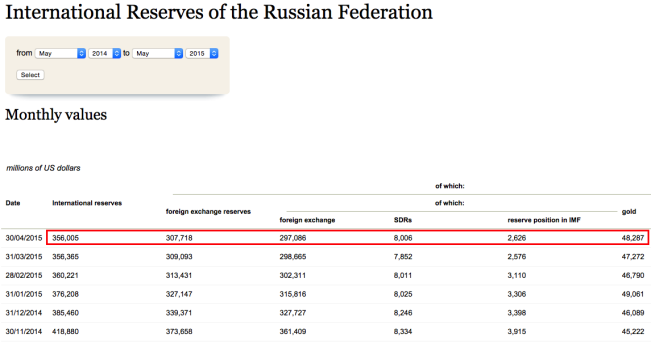 The error can be confirmed by looking at the International Reserves level in 2012-2013, when it was about 500 billion USD. Sputnik wrote, “The head of Russia’s Central Bank is determined to increase the country’s gold reserves to its previous levels in 2012-2013, from $360.5 billion up to $500 billion”. If we look at Russia’s Gold Reserves in tonnes these were far lower in 2012-2013 than they are today (while the price of gold was much higher back then). It’s impossible Russia had more gold in reserve in 2012-2013 then today. 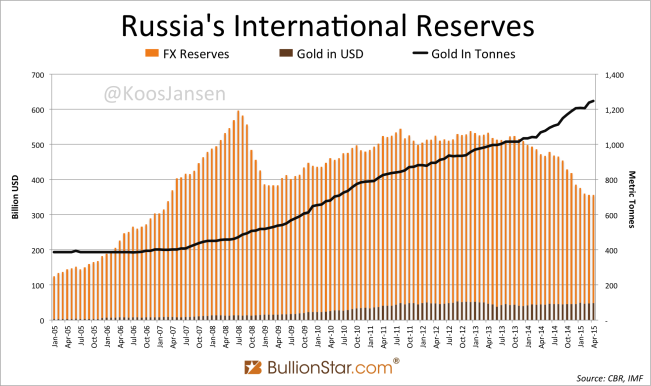 What Elvira Nabiullina actually said (June 4, 2015, St. Petersburg) we can read at Bloomberg:

Reserves should reach a “comfortable” level of about $500 billion within the next few years from about $357 billion now, Bank of Russia Governor Elvira Nabiullina told the International Banking Congress in St. Petersburg on Thursday.

This quote makes sense. Russia’s International Reserves are currently at 357 billion USD and Elvira Nabiullina is aiming to boost reserves to 500 billion USD (which Russia owned in 2012-2013, see last chart).

If we replace “Gold Reserves” in Sputnik’s article by “International Reserves”, all the numbers match up with the most recent data from the CBR and IMF. Case closed.

Sputnik’s article on a mirror server.