Don’t Believe Everything You Read On The Internet

Wholesale gold demand measured by withdrawals from Shanghai Gold Exchange (SGE) vaults remains very strong this year at 45 tonnes in week 19 (May 11 -15). Year to date 903 tonnes have been withdrawn. 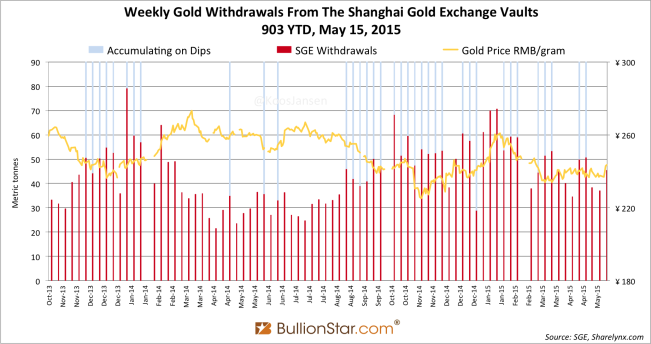 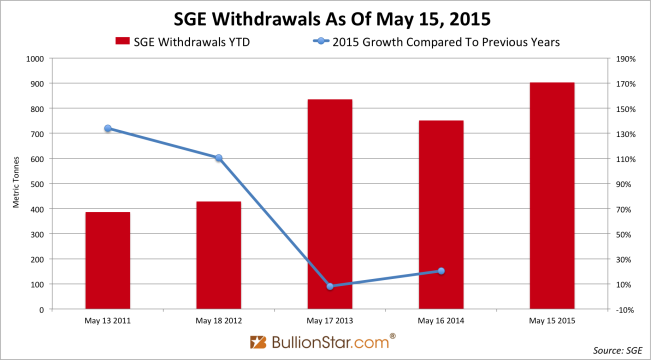 We can see withdrawals are stronger than ever. We must consider though, the gold withdrawn can be supplied through domestic mining output, import and recycled gold (and stock-carry over). Bare in mind, it’s not proven how much of what component has supplied the SGE this year. Additionally, withdrawals could have been made through the Shanghai International Gold Exchange (SGEI).

Don’t Believe Everything You Read On The Internet

Recently a website called Want China Times published a story titled, “China Could Crash US Dollar With 30,000 Tons Of Gold: Commentary”. I would like to share my opinion on this story about the Chinese gold market that has directly or indirectly reached many readers.

First I would like to go back to last year. On May 17, 2014, I published an article on the Chinese silver market, “Chinese Real Estate Debt Settled In Silver?”. Based on an article from Want China Times, I wrote real estate debt in the Chinese city Ordos was settled in physical silver. Real estate debt of 1 million yuan was settled with 500,000 yuan in silver, according to Want China Times (WTC). Regrettably I copied this story. A commenter on my post raised serious concern about the validity of the WTC story. On May 19, I wrote WTC an email asking for the original source their article was based on. Until this day I have received no reply on this inquiry.

On June 2, 2014, WTC published an article that was also eagerly read in the gold space, “Wall Street Concerned Over China’s Gold Hoarding”. WTC disclosed the source of this article to be a Chinese website called BWChinese, that quoted an analyst from Hong Kong, Leung Hai-Ming. Again my doubts on the integrity of WTC was triggered. I called WTC, BWChinese and tried to find Leung Hai-Ming. On the BWChinese website I couldn’t find anything that remotely resembled the story at WTC. On the phone BWChinese couldn’t help me either.

On June 3, 2014, I received an email from WTC in response to my question about the source of the “Wall Street Concerned Over China’s Gold Hoarding” article:

As your request on email and a call from Charlie in In Gold We Trust, we have found the story you mentioned in our website comes from an article in BWCHINESE. It was written in Chinese. Here is its link:

Thanks for your mail and call. I hope this info will be useful to you.

At the time my blog was titled In Gold We Trust.

When reading the link to BWChinese it became apparent to me the WTC article could not have been based on this story. The story on BWChinese was about gold, but did not resemble the content of the WTC article. Perhaps WTC thought I couldn’t read Chinese and thus wouldn’t figure out that there was no source, who knows. In any case they sent me a false link, which severely damaged their credibility.

I decided to publish my findings and write I was wrong on the Chinese real estate market in my post from May 17, 2014 – as I came to believe WTC is no credible source and real estate debt was not settled in silver. I had learned to be more skeptical, especially towards “Chinese” websites – WTC is based in Taiwan, and thankfully I can always correct myself when I’m wrong.

Back to WTC’s recent piece, the 30,000 tonnes story from May 15, 2015. In this article they refer to the source Duowei, again a Chinese “unreadable” website. And again, WTC is quoting a gentleman with a Chinese name, this time it’s Jin Zihou. From Want China Times:

China has the ability to crash the unstable US dollar with 30,000 tons of gold reserves, says Chinese economic observer Jin Zihou.

Who exactly is Jin Zihou and where did he say this? Well, Jin Zihou is an author (/blogger) with no particular expertise of the Chinese gold market, he wrote an article published on May 6, 2015, at … wait for it … BWChinese. The Duowei story is nearly an exact copy of Jin’s story at BWChinese. Shortly we’ll discuss where he got the 30,000 tonnes number. Let us continue at WTC:

In a commentary posted online, Jin noted that former US Federal Reserve chair Alan Greenspan once said that the renminbi could become unexpectedly powerful in today’s financial system if Beijing would convert its US$4 trillion in foreign reserves into gold.

Greenspan once said that China could convert its $4 trillion reserves into gold, according to Jin Zihou. First of all there is no evidence Greenspan has ever said this. Second, would it be a smart thing to do? If China would sell $4 trillion and buy gold in a short period of time the global monetary system would collapse and the value of the dollar would evaporate, which would immediately halt global trade. This is not particularly in China’s interest. Needless to say, China is slowly trying to get out of its grotesque USD position, but it can not convert $4 trillion into gold any time soon. So, I’m not so sure about this statement from Greenspan.

UPDATE May 27, 2015: I got a few emails from people stating Greenspan did say China would convert its US$4 trillion in foreign reserves into gold, referring to this quote by Greenspan. If you read it you’ll notice a slight nuance, Greenspan said China could convert a “relatively modest part of its $4 trillion foreign exchange reserves into gold", which is not the same as converting all foreign exchange reserves into gold. See the difference? The story by WTC was copy-pasted from several bits and pieces on the internet, exaggerated, twisted, a few Chinese names were added – because it sounds interesting – and from there it took of. This post is meant to show how “stories" on the internet, whether true or false, can be copied so many times that eventually people start seeing it as the truth.

With the US dollar growing more unstable and China being America’s largest creditor, Beijing could potentially crash the US dollar with 30,000 tons of gold, Jin said.

However, Alasdair Macleod, head of research for GoldMoney, states that China could have easily piled up 25,000 tons of gold between 1982 and 2003, meaning its gold reserves could have exceeded 30,000 tons by now.

Alasdair Macleod has written an article in 2014 stating “the Chinese state has probably accumulated between 20,000 and 30,000 tonnes since 1983”. In my humble opinion this estimate is based on no evidence, but you can read the article and make up your own mind. Now, was the 30,000 tonnes number conceived by MacLeod or Jin? The only source I could find on the 30,000 tonnes number is MacLeod’s estimate. In a new Chinese jacket (Duowei, Jin) the story was transformed and made additional rounds. (if someone else has an additional source I would love to read it, please comment below.)

Starting from BWChinese via Duowei and Want China Times the 30,000 tonnes story was re-ignited and has spread over the internet. Shortly after Russian website Pravda.ru published, “China Saves Up 30,000 Tons Of Gold To Topple US Dollar From Global Reign”. Pravda did not include any links, but they mention Duowei as the source (so again, this was MacLeod’s estimate). Sputnik published, “Dragon Rising: China’s Gold Will Break World’s Dependence on US Dollar”. From Sputnik:

China can ultimately overthrow the US dollar domination using its 30,000 tons of gold reserves, according to Chinese economist Jin Zihou.

Remarkably, Alasdair Macleod, a researcher and former Executive Director at an offshore bank in Guernsey and Jersey, pointed out that between 1983 and 2003 China could have secretly accumulated almost 20,000 tons of gold.

This is not remarkable, as Jin and MacLeod are the same source.

There have been many blogs and websites that copied the same story, all multiplied from the WTC article. My point being, the truth is hard to come by and the internet did not make the process more easy, at best only faster. From my personal experience I like to use hard evidence as a foundation from where speculation can be used to progress. Recently I wrote an article trying to separate facts from speculation regarding PBOC gold purchases, which you can read here.

My grand father told me as early as 1965, “don’t believe everything you read on the internet.”